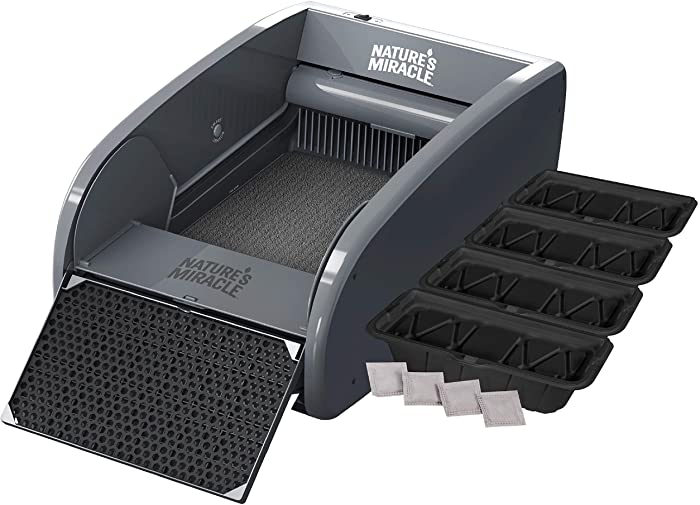 Nature’s Miracle Multi-Cat Self-Cleaning Litter Box gives you a pretty good idea of what it is all about, right there in the title name of the product. Like other self-cleaning litter boxes of its type, Nature’s Miracle promises to clean up and scoop after every single time that your cat’s use it, making cleaning up after your kitties easier and hassle free.

Nature’s Miracle comes equipped with odor control receptacles and carbon filters that are intended to keep unwanted odors contained, while the antimicrobial product protection controls odors that are caused by bacteria that can grow on the litter box itself. S

ince it cleans so quickly and can do so after each use, Nature’s Miracle is also a good choice for multi-cat households–a good thing, since this is exactly what is suggested in the name of the product as well!

Here are some of the pros and cons that we found for Nature’s Miracle:

One of the biggest concerns that any cat owner will have, is dealing with the unpleasant odor of their beloved cats’ waste. Obviously, nobody wants a stinky home, not for themselves, nor is it a fun thing to show off to house guests.

Whenever a cat owner switches to a new litter box or to a new type of cat litter, this concern understandably increases as the unknown product is put to the test. One of the biggest pluses that we found with Nature’s Miracle, is that it really does efficiently keep odors under control. Since the box can clean up the waste after each use, this also takes the hassle out of having to bend down close to the unpleasant odors and scooping out the waste yourself.

While the box is not covered, which is what we typically associate odor control with, the attached disposable receptacle that the waste goes into does a great job of keeping these smells under control. This is good news for cats who are not fans of covered litter boxes, and for owners who don’t want their to see and smell their cat’s bathroom breaks.

Automatically Cleans And Scoops After Every Use:

Because the Nature’s Miracle automatically cleans and scoops after every time that your cat uses it, not only does this make clean-up easier for you, but it also means that your home is more hygienic as a result. Nature’s Miracle runs on electricity, and requires an electrical outlet to in order to work.

You can also run the box manually if you don’t want to keep it on the on mode, by simply pressing a button. A rake then moves across the litter bed, scooping the clumps into a disposable, covered receptacle, leaving the litter bed fresh and ready for your cat’s next use.

Because the rake separates the clumps from the rest of the clean litter, Nature’s Miracle should save you on your litter use overall, which in the long-run, also means saving you money.

Takes Minutes To Put Together

Nature’s Miracle is not terribly complicated to assemble. Set it up in a dry place where there is low foot traffic, but where it is also close to an electrical outlet. The package comes with a disposable waste receptacle, which will need to be fitted into the box itself.

A detachable carpeted paw cleaning ramp leads up to the opening of the litter box, so your kitty doesn’t track too many granules of litter out with her after she has used the box. Minimum and maximum lines on the inside of the box will guide you as you fill the box up, ready for your cat’s use.

Works With Your Cat’s Favorite Litter:

Or should we say, with your favorite litter, since whatever works for your cat probably means that it work for you too. Some self-cleaning litter boxes require you to use their type and brand of litter, which is just another aspect of transitioning from something that your cat is already used to, to something new, which can be difficult and/or stressful.

We always recommend using a high quality brand of litter that clumps easily, no matter which kind of litter box you decide is best to use for your cats.

Litter Can Get Outside Of The Box

While the carpeted ramp helps to clean off your cat’s paws when they exit the box, depending on how much of a digger your cat is, litter can still get out of the box, especially since it is not covered, which can make the extra clean-up that goes into sweeping and or vacuuming around the box a little bit of a headache, and can feel like the whole endeavor is a bit counterproductive–this box is supposed to be self-cleaning, after all.

Fear not, because there is an easy fix to this problem should it occur. Make sure to experiment with how high you fill the litter box up and make sure that when new litter is added, that it is evenly distributed across the base of the box. You can also add litter guard to keep these messes to a minimum, and it should be no problem.

Makes A Bit Of Sound

While Nature’s Miracle is not terribly loud, it does make a whirring sound when the cleaning mode goes into action. While some cats might find this completely innocuous, other cats may find it a curious source of entertainment, and at worse, a startling and disturbing thing that makes going potty a stressful ordeal.

Still, most pets can get used to anything over time, once the novelty of the new thing wears off. After you set up Nature’s Miracle, just keep your old litter box around for a few days, but do not scoop it out. When the old box gets full, your cats will naturally transition to the new box, and they should eventually forget about the new sound that it makes when it is cleaning up after them.

With More Than One Cat, Expect To Empty The Receptacle Each Day

The disposable receptacles are not particularly large, so with more than one cat, and depending on your cats’ habits and behaviors, you will likely have to empty them once a day. This will still save you time and effort on scooping yourself, and four receptacles come with the litter box in its packaging.

Disposable Receptacles Are Expensive To Replace:

While it is helpful that four disposable receptacles come with the box, buying new receptacles can get to be a bit on the expensive side. In this case, an easy money saving tip that still works very well with how Nature’s Miracle functions, is to simply buy removable liners that can go into any small waste bin, or use recycled grocery bags.

Just keep the receptacles to put the bags in, and give them a wash every now and again to keep your litter box as clean and hygienic as possible.

Nature’s Miracle is a safe and easy litter box to use. While it runs on electricity, the box will not go into cleaning mode while your cat is using it, and if there are still any lingering worries about this, the manual pressing of a button will ensure cat owners that this will not be a problem.

While it takes a bit of cleaning here and there, especially if you are keeping the receptacles and using a liner to throw out the waste instead of buying boxes of new receptacles, it will still take you less time to clean up than it would if you had a traditional litter box that didn’t do most of the hard work for you.

You may need to give the rake an occasional wipe down as well, since this part of the box will come in contact with waste the most, but this would be true of any other similar model of self cleaning litter box that you could find on the market. This litter box also comes with a one year warranty.

Nature’s Miracle Multi-Cat Self-Cleaning Litter Box may look quite similar to other self-cleaning litter boxes that pet owners may find on the market, but we found this one to be a real gem. This was especially the case with when it came to odor control.

The disposable receptacle that the rake moves the waste to does a good job of making sure that the not only does the waste stay out of sight, but the smell also stays inconspicuous as well. Available on Amazon for around $160, Nature’s Miracle is a bit of an investment, but it is still well within the ballpark of what one can expect when purchasing a self-cleaning litter box, which is itself, a worthwhile investment for pet owners who either need or want the extra cleaning help.

What really sets this box apart from the others is that it requires far less clean-up, set-up and fuss, and does exactly what it says it is going to do. This may just be the hassle-free litter box that you and your feline friends are looking for.