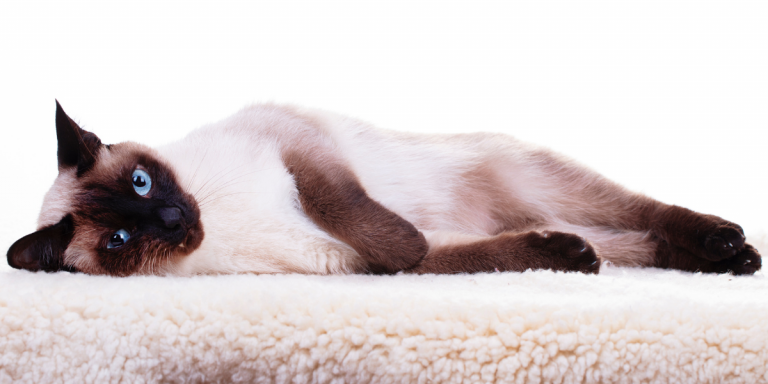 Temperament
? The breed’s dominant personality traits. While each individual has a unique personality, breed-specific genetics affect qualities like sociability, playfulness, and intelligence.
Extroverted, talkative, intelligent, fun-loving
Origin
? Where this breed was first established.
Thailand
Other Names
? In addition to their official names, most breeds earn a few nicknames.
Meezer
Group
? Breeds are grouped by their size and coat type.
Small to medium-sized short-haired
Height
? The typical adult height among individuals of this breed. Height is measured from the top of the head to the bottom of the front paws.
8"- 10"
Body Length
? The typical adult body length among individuals of this breed. A cat’s length is measured from the base of the tail to the tip of the nose.
11"-14"
Weight
? The typical adult weight range of this cat breed.
8-15 pounds
Life Expectancy
? The average lifespan of the breed. While life expectancy is fairly consistent across all cat breeds, some breeds tend to live shorter or longer than others.
15-20 years
Price
? The average price.
$600 - $1200
Affection Level
? Breeds with a high affection level want to give and receive a lot of attention, while less-affectionate breeds are not as interested in petting and snuggles.
0 100%
80%
Activity Level
? Breeds with high activity levels will engage more in active play and demand more space and attention.
0 100%
80%
Pet-Friendly
? How well the breed tends to get along with cats, dogs, and other pets.
0 100%
60%
Kid-Friendly
? Breeds with a higher rating in this area tend to be gentle and patient, while lower-rated breeds may feel uncomfortable with children.
0 100%
40%
Sociability
? Breeds with a higher sociability rating will want to spend time with you all day, while less-sociable breeds seldom seek out human interaction.
0 100%
100%
Intelligence
? Breeds with higher intelligence ratings are more curious, investigative, and easy to train. Less-intelligent breeds are less trainable but often laid-back and easygoing.
0 100%
100%
Playfulness
? Breeds that score higher in this area have strong hunting instincts that make them great playtime companions.
0 100%
100%
Independence
? Breeds that score higher in this area are able to spend hours alone, while less-independent breeds require plenty of attention.
0 100%
20%
Vocality
? A higher rating in this area indicates a breed prone to plenty of meowing and other vocalizations, while less-vocal breeds are happy to stay quiet.
0 100%
100%
Grooming
? Breeds with higher grooming scores require more maintenance like brushing and bathing, while lower-scored breeds are virtually maintenance-free.
0 100%
20%

About the Siamese Cat

If you've been looking for a cat who likes to talk back, consider the Siamese. Among the most vocal of all breeds, these chatty cats love nothing more than to spend time alongside their favorite people, eagerly offering advice and opinions about everything that happens throughout the day.

Talkative tendencies are just the beginning. Siamese cats are friendly and playful, with the ability to get along well with just about everyone so long as they are properly socialized as kittens.

Charming blue eyes contribute to the breed's stunning appearance. Since looks aren't everything, it's important to note that the Siamese cat is highly intelligent and more than a little curious. These kitties keep their families amused with their antics and they are usually more than happy to learn simple tricks. Playing fetch is a favorite pastime, and outdoor walks on leashes are often enjoyed, as well.

Very busy families might do better with a cat that requires less attention, as the Siamese can quickly develop unwanted behaviors if left alone for too long. The good news is that if you have always wanted a Siamese kitten, having a second cat or a friendly dog that's willing to stand in as a playmate can be a remedy for the kind of boredom that can lead to destructive tendencies. This doesn't mean that you'll be able to leave your cat to its own devices; however, it helps to have another animal to provide companionship when you cannot be at your cat's beck and call.

Overall, Siamese cats are marvelous companions and fantastic snugglers. No wonder the Siamese is one of the world's most popular cat breeds! 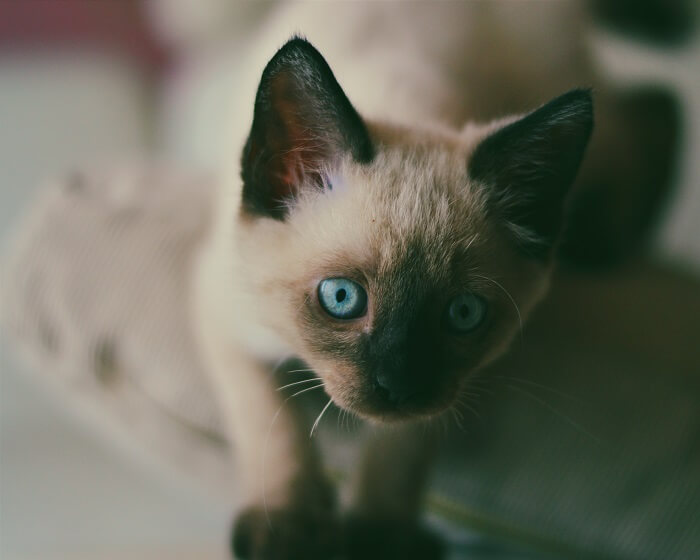 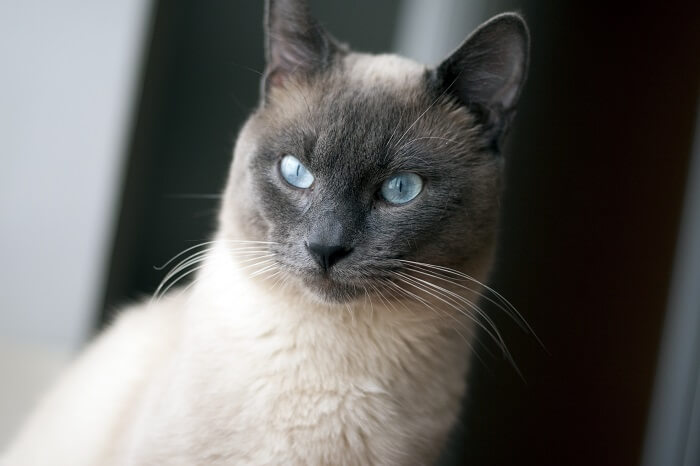 The Siamese cat has no special nutritional needs, however it is vital to offer a high-quality diet that is appropriate for your cat's life stage. A diet that is high in protein and low in carbohydrates can help prevent obesity, particularly later in life.

Thanks to their short, single layer coats, Siamese cats are very easy to care for. Since too much brushing can alter the coat’s texture, simply give your cat a good rubdown with your fingers once or twice per week to remove any loose hair and cut back on shedding. In addition, you may want to use a chamois or a silk scarf to polish your cat's coat to a gleaming shine.

Siamese cats are prone to periodontal disease, so dental health should be a priority. You may be able to cut back on expensive dental cleanings by brushing your cat's teeth at home.

Last but not least, consider clipping your cat's claws. Siamese cats have a tendency to use their front paws like hands, getting into drawers and cupboards. Keeping their toenails clipped can help prevent damage to your furniture.

The Siamese is a naturally playful, active cat with a tendency to seek high places. Provide a tall cat tree to satisfy the natural urge to jump and climb, and take time out to offer interactive play sessions. Siamese cats enjoy all kinds of toys, particularly those that stimulate the mind. For example, a puzzle toy that dispenses treats is likely to be a favorite with any Siamese.

Siamese tend to be very healthy cats and many enjoy exceptionally long lives, often surviving into their 20s. Even so, there are several potential health concerns to be aware of including respiratory infections and heart disease. Siamese are prone to central nervous system diseases including psychogenic alopecia, a condition that leads to excessive grooming that causes hair loss. Some also suffer from feline hyperesthesia syndrome, which causes oversensitive skin.

Siamese cats are also more sensitive to anesthesia than other cats, meaning that surgical procedures can pose a higher risk. Crossed eyes and kinked tails are two common issues for Siamese cats. Neither is serious although crossed eyes can prevent the affected cat from enjoying good peripheral vision.

The Siamese cat is a natural aristocrat, originally bred in the kingdom of Siam, which we know as Thailand today. Because these cats were considered sacred in ancient Siam, only members of royalty and Buddhist monks were allowed to keep them.

The breed was first described in the ancient Tamra Maew manuscripts also known as The Cat-Book Poems, which was curated during the Ayutthaya Kingdom between 1351 and 1767.

When European dignitaries began visiting Siam in the 1800s, they were often impressed with the cats and as a gesture of goodwill, members of the Siamese royal family began offering Siamese cats as gifts. These cats made their way to Europe with their new families, quickly gaining popularity for their exquisite appearance and unique personalities.

In 1884, British Consulate General Edward Blencowe Gould brought a breeding pair of Siamese cats to his sister, Lilian Jane Gould, who co-founded Britain’s Siamese Cat Club in 1901. Most British Siamese cats can be traced back to just eleven original imports.

The Cat Fanciers Association (CFA) granted official recognition in 1906, making the Siamese one of the oldest pedigreed cat breeds in existence.

By the 1950s and 1960s, the Siamese had gained popularity worldwide. Today, the breed is accepted by all cat registries. Long-haired Siamese cats are typically registered as Balinese. 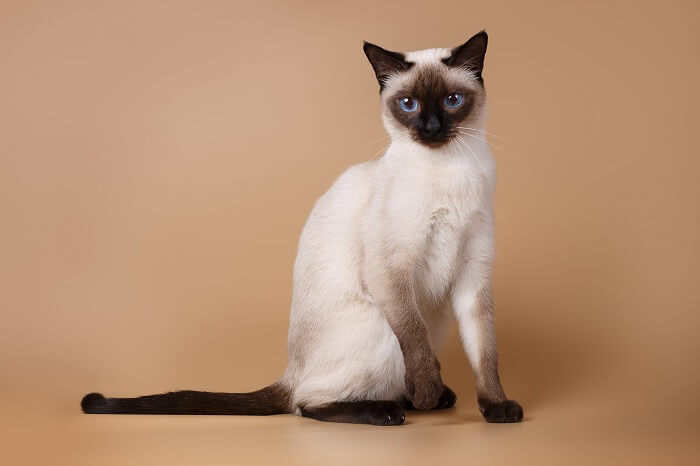 Seal Point is the most common Siamese color, and was first to be accepted by CFA

All Siamese kittens are born white. 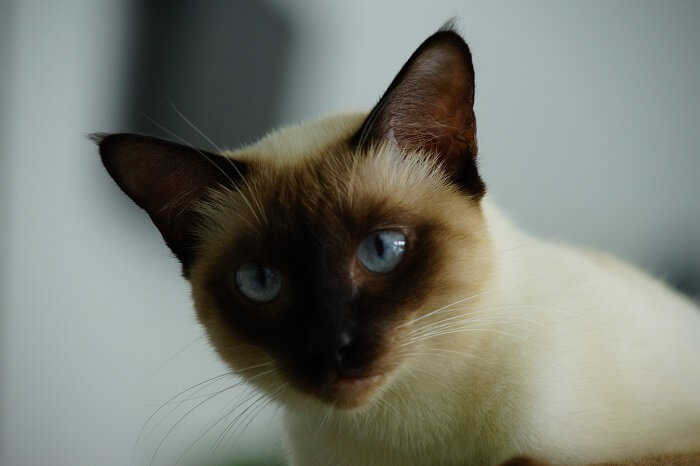 The eyes should be almond-shaped, with a slight slant. All Siamese cats have blue eyes; richer, deeper colors are preferred.

The legs should be long and slim, with longer hind legs and slightly shorter forelegs. The paws should form small ovals, and should have a dainty appearance.

A Siamese cat’s tail should be long and thin. It should taper to a fine point.

The body is long and lean, with a tubular shape and a graceful, athletic appearance.

The head is long and wedge-shaped, with no break at the whiskers. Males may display jowls. The neck should be long and slender.

A Siamese cat’s ears should be very large and deep, with wide bases and rounded tips. The ears should continue the triangle that is formed by the face when viewed straight on.

The coat should be short, and should lie close to the body. It should have a fine, soft feel, and a glossy appearance.

The body should have an even pale fawn, ivory, or cream color, and points at the mask, ears, tail, legs, and feet, should be clearly defined, in seal, chocolate, blue, or lilac colors. The nose leather and paw pad color should complement the coat’s color.

How much does a Siamese cat cost?

How big do Siamese cats get?

Siamese cats tend to be small in size. A fully grown Siamese cat might weigh between 8-15 pounds or more and range in height anywhere from about 8"- 10" inches tall.

How long do Siamese cats live?

The Average lifespan for Siamese is 15-20 years.

Siamese are short-haired cats. Therefore, they do not shed as much as long-haired cat breeds.