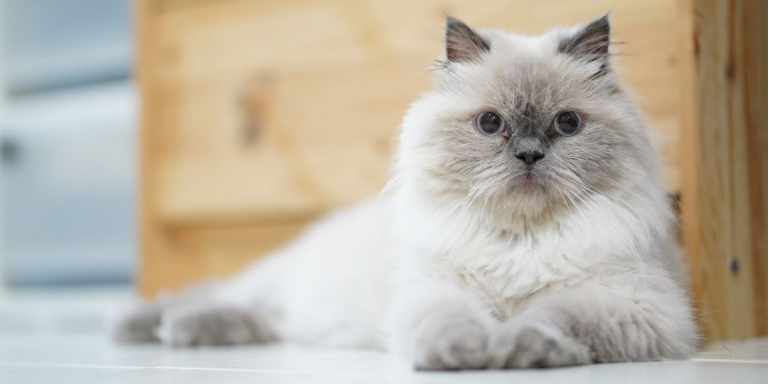 Temperament
? The breed’s dominant personality traits. While each individual has a unique personality, breed-specific genetics affect qualities like sociability, playfulness, and intelligence.
Gentle, affectionate, family-friendly, sweet
Origin
? Where this breed was first established.
United States
Other Names
? In addition to their official names, most breeds earn a few nicknames.
Himmy
Group
? Breeds are grouped by their size and coat type.
Medium-sized longhair
Height
? The typical adult height among individuals of this breed. Height is measured from the top of the head to the bottom of the front paws.
12"-14"
Body Length
? The typical adult body length among individuals of this breed. A cat’s length is measured from the base of the tail to the tip of the nose.
12"-16"
Weight
? The typical adult weight range of this cat breed.
7-12 pounds
Life Expectancy
? The average lifespan of the breed. While life expectancy is fairly consistent across all cat breeds, some breeds tend to live shorter or longer than others.
12-15 years
Price
? The average price.
$200-$3,000
Affection Level
? Breeds with a high affection level want to give and receive a lot of attention, while less-affectionate breeds are not as interested in petting and snuggles.
0 100%
100%
Activity Level
? Breeds with high activity levels will engage more in active play and demand more space and attention.
0 100%
50%
Pet-Friendly
? How well the breed tends to get along with cats, dogs, and other pets.
0 100%
80%
Kid-Friendly
? Breeds with a higher rating in this area tend to be gentle and patient, while lower-rated breeds may feel uncomfortable with children.
0 100%
90%
Sociability
? Breeds with a higher sociability rating will want to spend time with you all day, while less-sociable breeds seldom seek out human interaction.
0 100%
100%
Intelligence
? Breeds with higher intelligence ratings are more curious, investigative, and easy to train. Less-intelligent breeds are less trainable but often laid-back and easygoing.
0 100%
90%
Playfulness
? Breeds that score higher in this area have strong hunting instincts that make them great playtime companions.
0 100%
70%
Independence
? Breeds that score higher in this area are able to spend hours alone, while less-independent breeds require plenty of attention.
0 100%
30%
Vocality
? A higher rating in this area indicates a breed prone to plenty of meowing and other vocalizations, while less-vocal breeds are happy to stay quiet.
0 100%
50%
Grooming
? Breeds with higher grooming scores require more maintenance like brushing and bathing, while lower-scored breeds are virtually maintenance-free.
0 100%
100%

About the Himalayan Cat

Is the Himalayan a Persian cat? Is the Colorpoint Persian the same as a Himalayan? The answer depends which registry the cat belongs to! Some organizations view the Himalayan – fondly nicknamed the "Himmie" – as a Persian variant rather than a separate breed. Others classify  the Himalayan cat as a breed of its own.

Most Himalayan cats are incredibly sweet natured, with a fondness for cuddling up to their favorite people. Thanks to their Siamese heritage, these kitties tend to be a bit more playful than the average Persian. If you are looking for a cat that loves to lounge and you don't mind daily grooming sessions, then the Himalayan / Colorpoint Persian might be your perfect feline companion! 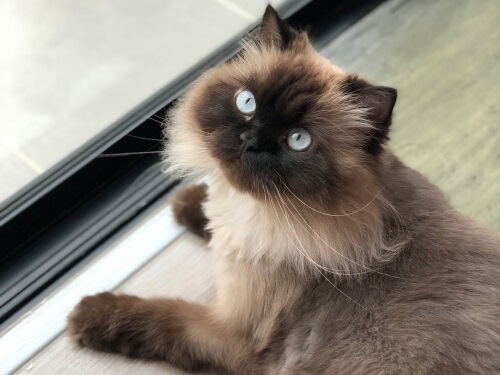 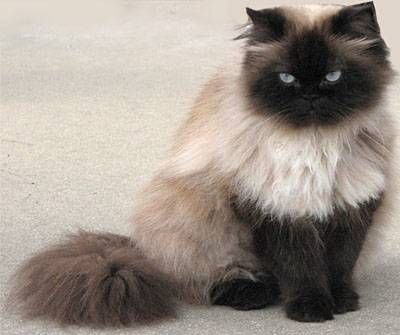 Colorpoint Persian cats have no special nutritional needs, however you might wish to look for food that contains added Omega essential fatty acids to support skin and coat health. Like all other cats, the Himalayan thrives on a high-quality diet that includes real meat or fish as the first ingredient.

Long, luxurious fur calls for daily grooming sessions, which Himalayan Colorpoint Persian cats typically enjoy. Not only does daily brushing prevent mats from forming, it is a wonderful bonding ritual. Some Colorpoint Persian cats require daily facial care to remove tear staining. This is more common in individuals with flatter faces and facial folds that catch moisture as it travels down from the tear ducts.

Because the Himalayan Colorpoint Persian is prone to obesity, it is very important to encourage daily exercise. Luckily, these cats enjoy intense play and come to look forward to it once it is a habit. Just like Siamese, Himalayan cats enjoy interactive games like fetch and will happily chase a laser beam.

If you have a cat with a very flat face, you may need to reduce the speed and intensity of your play sessions to help prevent shortness of breath.

Himalayan Colorpoint Persian cats are generally healthy, however some do carry the gene for polycystic kidney disease. Responsible breeders test for PKD, greatly reducing the likelihood of producing pets that are prone to the disease.

Since Colorpoint Persian cats are brachycephalic, with flattened faces, they can suffer from breathing difficulties and dental malocclusions, along with cherry eye, which can occur in any breed with eyes that protrude.

Some individuals suffer from feline hyperesthesia syndrome, which is a nervous system disorder that can cause a wide range of uncomfortable symptoms.

None of these issues are prevalent and most Himalayan breeders are careful to pair only the healthiest parents with the hope of preventing heritable diseases from plaguing offspring.

During the 1930s, two Harvard researchers – Clyde Keeler and Virginia Cobb – decided to conduct a study by combining Siamese and Persian cats. Their efforts led to the birth of a cat named Newton's Debutante. They simply called it a Siamese – Persian after its parents. This beautiful cat had classic

Siamese Colorpoint markings, blue eyes, and a long, silky coat. He ultimately became one of the first cats to represent the Himalayan Colorpoint Persian breed.

Cat breeder and conservationist Jean Mill, also known as the founder of the Bengal cat breed, began working on the breed in 1948.

In 1955, Brian Sterling-Webb created a similar crossbred cat that he called the Long-haired Colorpoint. In 1957, Margaret Goforth's continued efforts at combining Siamese and Persian cats gained breed recognition from the Cat Fanciers Association. Goforth is credited with naming the Himalayan cat breed. Outcrossing to both Siamese and Persian cats continued throughout the next few decades, with various breeders focusing on either Persian or Siamese traits. In 1984, CFA decided that the Himalayan cat was actually a Persian variant and many of today's Himalayans exhibit more Persian traits than Siamese traits. 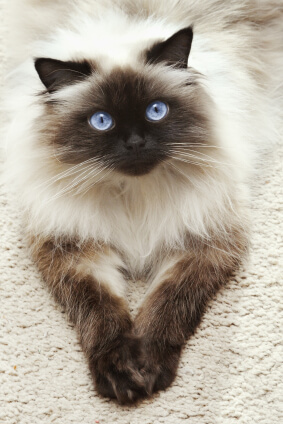 The smallest adult cat ever recorded was a Himalayan Colorpoint Persian. Named Tinkertoy, this tiny kitty was under 3 inches tall and was less than 8 inches long. 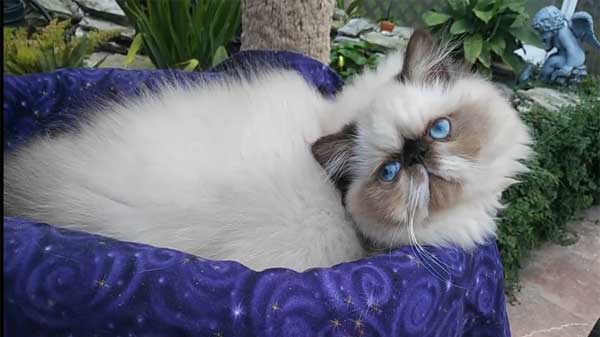 The legs should be strong and thick, with a sturdy appearance. The paws should be large and round, preferably with tufts between the toes.

A Himalayan or Colorpoint Persian cat should have a thick, well plumed tail with a rounded tip.

The Himalayan Colorpoint Persian has a cobby body with a round appearance and ample underlying strength, with a broad chest and shoulders.

The ears are typically small and rounded, set wide apart and positioned low on the skull. Dense ear furnishings are typical.

Himalayan and Colorpoint Persian cats have long, double coats. A distinct ruff surrounds the neck, there is a lovely frill between the front legs, and there are typically tufts between the toes.

The Himalayan Colorpoint Persian is a pointed cat with a light-colored body and darker colored extremities. Points may be chocolate, blue, cream, seal, tortoiseshell, or flame (red).

How much does a Himalayan cat cost?

How big do Himalayan cats get?

Himalayan cats tend to be medium in size. A fully grown Himalayan cat might weigh between 7-12 pounds or more and range in height anywhere from about 12"-14" inches tall.

How long do Himalayan cats live?

The Average lifespan for Himalayan is 12-15 years.

Himalayan are long-haired cats, so you do have to expect a certain amount of shedding from this breed, but they don't shed as much as other cat breeds.