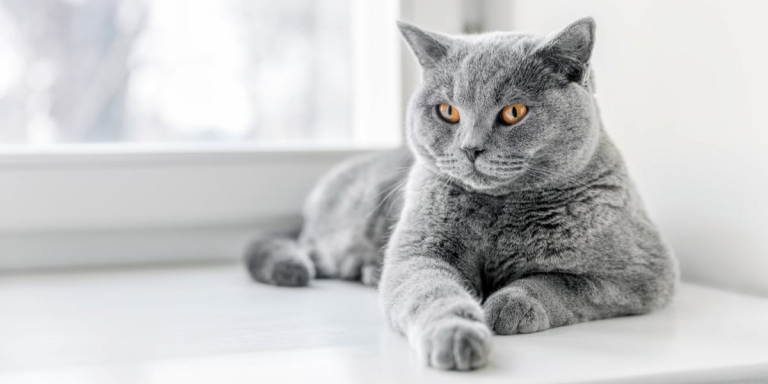 Temperament
? The breed’s dominant personality traits. While each individual has a unique personality, breed-specific genetics affect qualities like sociability, playfulness, and intelligence.
Affectionate, easygoing, sensible, friendly
Origin
? Where this breed was first established.
United Kingdom
Other Names
? In addition to their official names, most breeds earn a few nicknames.
Britanica, Lowlander
Group
? Breeds are grouped by their size and coat type.
Medium-to-large shorthair
Height
? The typical adult height among individuals of this breed. Height is measured from the top of the head to the bottom of the front paws.
11"-14"
Body Length
? The typical adult body length among individuals of this breed. A cat’s length is measured from the base of the tail to the tip of the nose.
12"-16"
Weight
? The typical adult weight range of this cat breed.
8-18 pounds
Life Expectancy
? The average lifespan of the breed. While life expectancy is fairly consistent across all cat breeds, some breeds tend to live shorter or longer than others.
12-16 years
Price
? The average price.
$300-$5,000
Affection Level
? Breeds with a high affection level want to give and receive a lot of attention, while less-affectionate breeds are not as interested in petting and snuggles.
0 100%
90%
Activity Level
? Breeds with high activity levels will engage more in active play and demand more space and attention.
0 100%
60%
Pet-Friendly
? How well the breed tends to get along with cats, dogs, and other pets.
0 100%
70%
Kid-Friendly
? Breeds with a higher rating in this area tend to be gentle and patient, while lower-rated breeds may feel uncomfortable with children.
0 100%
90%
Sociability
? Breeds with a higher sociability rating will want to spend time with you all day, while less-sociable breeds seldom seek out human interaction.
0 100%
90%
Intelligence
? Breeds with higher intelligence ratings are more curious, investigative, and easy to train. Less-intelligent breeds are less trainable but often laid-back and easygoing.
0 100%
90%
Playfulness
? Breeds that score higher in this area have strong hunting instincts that make them great playtime companions.
0 100%
70%
Independence
? Breeds that score higher in this area are able to spend hours alone, while less-independent breeds require plenty of attention.
0 100%
30%
Vocality
? A higher rating in this area indicates a breed prone to plenty of meowing and other vocalizations, while less-vocal breeds are happy to stay quiet.
0 100%
30%
Grooming
? Breeds with higher grooming scores require more maintenance like brushing and bathing, while lower-scored breeds are virtually maintenance-free.
0 100%
10%

About the British Shorthair Cat

Once known as the British Blue and exclusively bred for blue-gray coloring, the British Shorthair cat now comes in a multitude of colors, but it retains its typical rounded profile and it's delightful – yet somewhat reserved – personality.

In a nutshell, British Shorthair cats are pedigreed versions of British domestic shorthair cats that have been selectively bred over time to create a distinctive appearance and predictable personality traits.

These cats love their families and enjoy staying close, but they aren't big on cuddling. They prefer to lounge next to you rather than occupying your lap, and they aren't terribly demanding or overly vocal. British Shorthair cats make excellent pets for most households, but they don't tolerate disrespect, and they don't like to be held or carried.

These traits don’t add up to a mean or antisocial personality; instead, they’re an indicator that the British Shorthair may not be ideal for families with young children who aren't yet able to understand boundaries. 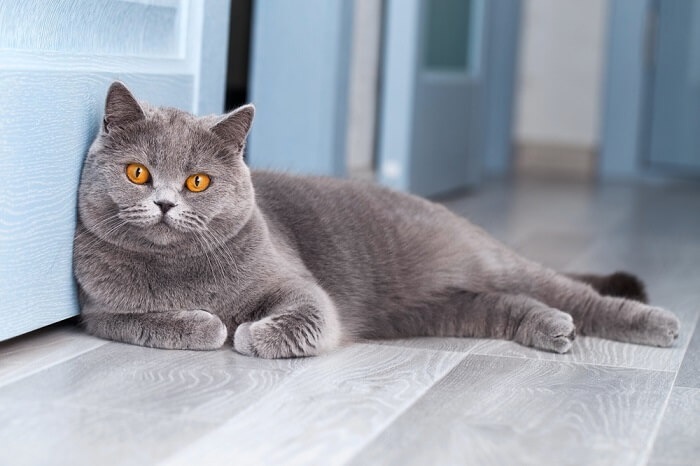 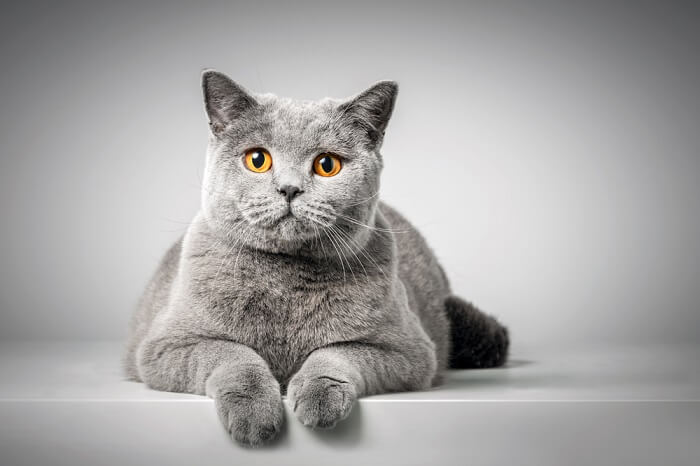 British Shorthair cats have no special nutritional needs; however, they are prone to obesity as they age. It's important to provide a high-quality diet that is relatively low in carbohydrates and high in protein.

Even though the breed is characterized by its short coat, they have a tendency to shed. Brushing your cat two to three times per week will help prevent fur from accumulating on your sofa, plus it will reduce the likelihood of hairballs.

You can help keep your cat healthy by brushing their teeth regularly. Regular nail trims can help prevent furniture damage.

British Shorthair cats have a playful streak, particularly during their youth. As these kitties get older, you might need to encourage play with interactive toys such as feathered wands and laser pointers. Battery-operated toys can encourage more activity, too.

The British Shorthair is a robust cat that generally enjoys excellent health. There are two known genetic disorders that can affect British Shorthair cats. Fortunately, breeders can screen for both and greatly reduce the likelihood of producing kittens with these disorders.

The history of the British Shorthair cat is a fascinating one. This ancient breed is believed to date back to the first century A.D. when the Romans invaded Britain, they brought cats with them. These early domesticated cats were tasked with the important job of keeping Roman camps clear of mice and other pests.

The Romans' cats bred with local wildcats and as time passed, the offspring developed a distinctive look. Contemporary British Shorthairs retain the appearance of their ancestors, which were large and robust, with dense, short coats that provided protection from the elements.

Cat fancier and artist Harrison Weir is credited with helping to develop the breed as we know it today. During the 19th century, he – and perhaps other breeders – began selecting for the blue-gray variant that ultimately became the British Blue. The newly standardized British Shorthair took pride of place at the first cat show in history, which was held at the Crystal Palace in London in 1871.

Incredibly, the British Shorthair cat nearly became extinct during the first world war and along with many other breeds, was nearly wiped out again by the end of the second world war.

The British Blue was recognized by the American Cat Association in 1967.

By 1980, the British Shorthair had gained recognition from The International Cat Association and the Cat Fanciers Association. All cat associations now recognize the breed. 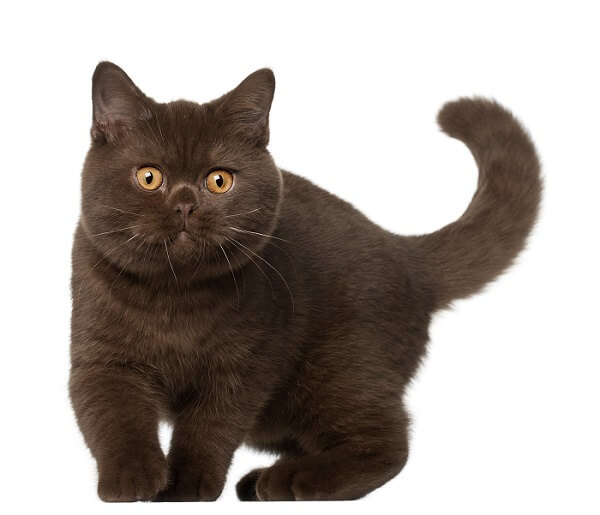 There is a behavioral difference between male and female British Shorthair cats. Males tend to have easy-going, laid-back attitudes, while females tended to take life more seriously.

The Cheshire Cat character featured in Alice in Wonderland is based on the British Shorthair.

British Shorthair cats are slow to mature. Most reach their full size by the end of their third year; some take as long as five years to fully mature. 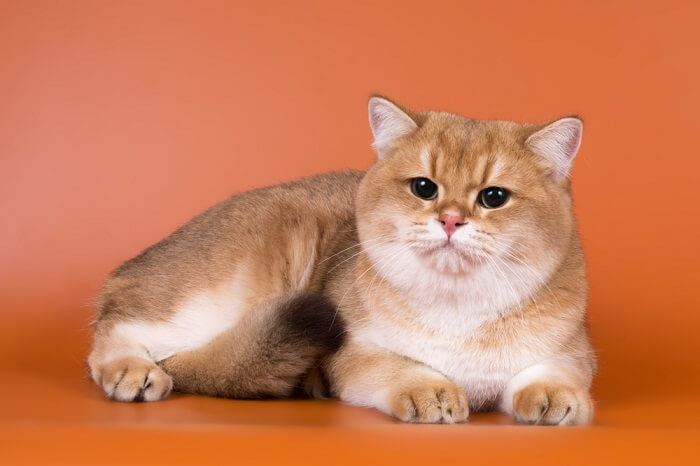 The eyes should be large and round. They should be level and set far apart. Eyes can be of any color that complements the cat's coat color.

The legs should be straight and well-proportioned in comparison with the body. They should exhibit strength and ample musculature.

The British Shorthair's tail should be of medium length with a thick base and a slight taper that leads to a well-rounded tip.

The British Shorthair is a large cat with rounded features throughout. The body is compact and powerful with a broad chest and strong hips. Mature males can reach 17 pounds and mature females can reach 12 pounds.

The head is well-rounded, and is perched on a short, thick neck. The forehead is rounded, with a slightly flattened plane toward the top of the skull. Both genders display jowls, with males having larger jowls than females. The muzzle is well-developed, with prominent whisker pads. These facial features give the British Shorthair cat its signature “smile.”

British Shorthair cats should have medium size ears that are broad at the base and round at the tips. The ears should be set far apart, and the outer edges should continue the rounded contour of the head.

The British Shorthair exhibits a thick coat that is dense but not double.

How much does a British Shorthair cat cost?

How big do British Shorthair cats get?

The Average lifespan for British Shorthair is 12-16 years.

British Shorthair are short-haired cats. Therefore, they do not shed as much as long-haired cat breeds.