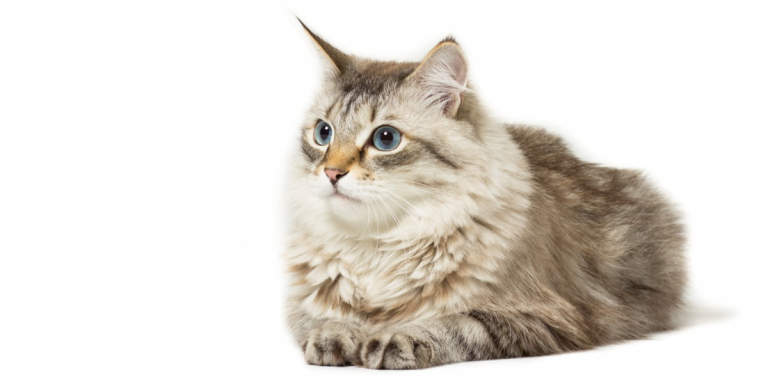 Temperament
? The breed’s dominant personality traits. While each individual has a unique personality, breed-specific genetics affect qualities like sociability, playfulness, and intelligence.
Energetic, friendly, playful, affectionate
Origin
? Where this breed was first established.
Russia
Other Names
? In addition to their official names, most breeds earn a few nicknames.
Siberian Forest Cat, Moscow Semi-longhair, Neva Masquerade
Group
? Breeds are grouped by their size and coat type.
Medium to large long-haired
Height
? The typical adult height among individuals of this breed. Height is measured from the top of the head to the bottom of the front paws.
9"- 11"
Body Length
? The typical adult body length among individuals of this breed. A cat’s length is measured from the base of the tail to the tip of the nose.
15"-18"
Weight
? The typical adult weight range of this cat breed.
17-26 pounds
Life Expectancy
? The average lifespan of the breed. While life expectancy is fairly consistent across all cat breeds, some breeds tend to live shorter or longer than others.
12-15 years
Price
? The average price.
$1000-$2000
Affection Level
? Breeds with a high affection level want to give and receive a lot of attention, while less-affectionate breeds are not as interested in petting and snuggles.
0 100%
80%
Activity Level
? Breeds with high activity levels will engage more in active play and demand more space and attention.
0 100%
60%
Pet-Friendly
? How well the breed tends to get along with cats, dogs, and other pets.
0 100%
80%
Kid-Friendly
? Breeds with a higher rating in this area tend to be gentle and patient, while lower-rated breeds may feel uncomfortable with children.
0 100%
80%
Sociability
? Breeds with a higher sociability rating will want to spend time with you all day, while less-sociable breeds seldom seek out human interaction.
0 100%
60%
Intelligence
? Breeds with higher intelligence ratings are more curious, investigative, and easy to train. Less-intelligent breeds are less trainable but often laid-back and easygoing.
0 100%
80%
Playfulness
? Breeds that score higher in this area have strong hunting instincts that make them great playtime companions.
0 100%
80%
Independence
? Breeds that score higher in this area are able to spend hours alone, while less-independent breeds require plenty of attention.
0 100%
60%
Vocality
? A higher rating in this area indicates a breed prone to plenty of meowing and other vocalizations, while less-vocal breeds are happy to stay quiet.
0 100%
40%
Grooming
? Breeds with higher grooming scores require more maintenance like brushing and bathing, while lower-scored breeds are virtually maintenance-free.
0 100%
40%

About the Siberian Cat

Formally known as the Siberian Forest Cat, the Siberian is a medium-sized semi-long-haired breed with a stunning triple coat and a charming personality.

Intelligent and playful, the Siberian cat loves to give and receive affection. These adorable kitties live to spend their days and nights alongside their favorite people, often chatting in melodic voices that have nothing in common with the harsher vocalizations of other talkative breeds such as the Siamese.

Siberian cats have a great reputation for friendliness, even where strangers are concerned. These cats happily greet everyone and so long as their experience is a positive one, they have the ability to befriend very young children, other felines, and respectful dogs.

Even though they are friendly and playful, Siberian cats are not terribly mischievous. They will get into things on occasion, but they are far more interested in watching their favorite humans while providing little tidbits of advice via those chirping, trilling, meows that contribute to their lovability. Since they like water and have water resistant coats, Siberians have a comical habit of playing in the water and even joining their favorite people at shower time.

The Siberian cat does have a mellow side, but it may take some time for quiet behaviors to dominate as this breed doesn't reach full maturity until about five years of age.

Siberian cats aren't terribly clingy, but they do thrive with companionship as they are communal by nature. If you spend most of your time away from home, consider adopting a second cat to keep your Moscow Longhair company. 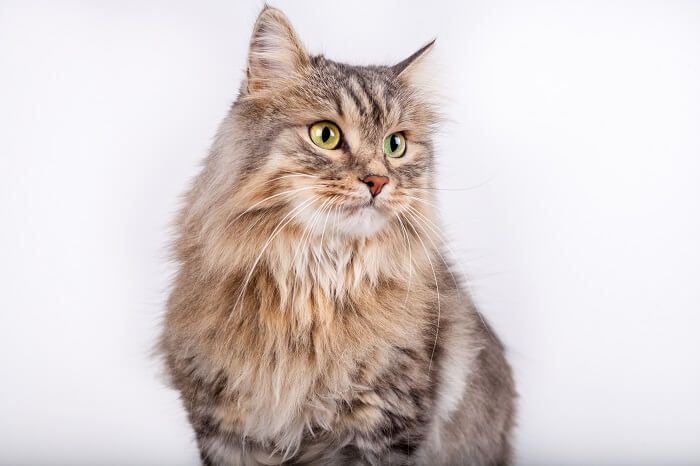 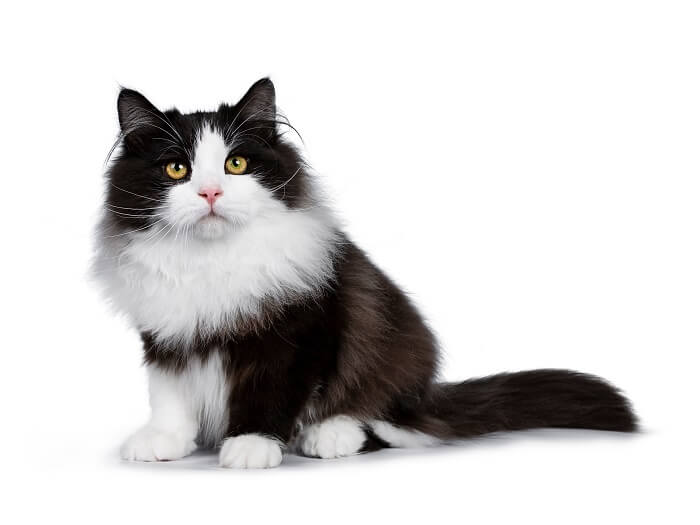 The Siberian cat does not have any special nutritional requirements; however, you may want to choose food with added Omega fatty acids to support healthy skin and keep your cat's coat in great condition. We recommend choosing high-protein, low carbohydrate food that's appropriate for your cat's life stage, as it can promote proper body weight and help your pet achieve longevity.

The Siberian cat has a very thick triple coat that consists of long guard hairs on the outside, a second long coat made up of awn hairs, and a shorter, downy undercoat that lies close to the skin. Surprisingly, this coat has a tendency to remain tangle-free, even without frequent brushing. Siberian cat parents find themselves brushing far more often as winter weather gives way to summer's warmer temperatures and the heavy undercoat is shed.

Since the Siberian cat is so playful and energetic, you might want to keep their claws trimmed to help prevent damage to your furnishings, clothing, and skin. In addition, you may wish to promote better dental health by teaching your cat to allow you to brush their teeth.

Beneath that thick, fluffy coat lies the heart of an Olympian. Siberian cats love to show off their athletic prowess and will do so whether you provide them with appropriate cat furniture or not. These kitties truly appreciate tall cat condos with big platforms to accommodate their large size. They also enjoy wall-mounted shelves, window seats, scratching posts, and interactive toys.

While you won't have to provide your cat with too much encouragement to play during its formative years, you may need to take the lead later in life. Siberian cats can easily become obese without ample exercise.

While Siberian Forest cats are generally healthy, they do have a slightly elevated risk for hypertrophic cardiomyopathy. Some individuals are prone to feline lower urinary tract disease.

The Siberian cat is a naturally occurring cat breed that has been refined through selective breeding. These cats originate from Russia, and the breed may be hundreds or even over a thousand years old. Some feline geneticists have suggested that these ancient cats might have contributed some of the DNA that went into creating new or domestic long-haired cats.

As one of Russia's national treasures, Siberian cats have enjoyed pride of place in folklore and fairy tales. According to legends, Siberians guided souls to the underworld, guarded homes, told stories, and sang songs. One particularly appealing legend says that anyone who buys or builds a new home should let the Siberian cat enter first, and for luck, place a bed in the spot where the cat decides to lie down.

Incredibly, and despite its long history in Russia, the breed is a recent addition to Western breed registries. One of the first Siberian cat breed standards was published by the Kotofei Cat Club of St. Petersburg in 1987.

Siberian cats were introduced to life in America in 1990, when Elizabeth Terrel of Starpoint Cattery imported a trio of Siberians, naming them Kaliostro, Nain, and Ofelia.

The International Cat Association. (TICA) accepted Siberians as a new breed in 1992 and elevated it to championship status in 1996. The Cat Fanciers Association granted official recognition in 2000 and advanced the breed to championship status in 2006. Today, the Siberian cat enjoys recognition around the world and is gaining popularity. The breed is still considered to be somewhat rare outside Russia, but is getting easier to find. 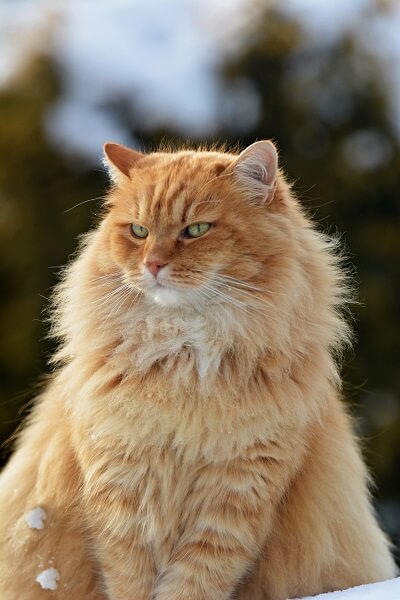 Siberian cats are also known as Moscow Semi-Longhairs. The colorpoint variation is recognized separately by some registries, which call it the Neva Masquerade.

The Siberian cat is one of a few breeds that is sometimes called hypoallergenic due to the fact that it's saliva produces a lower than average amount of an allergen called Fel D1.

Siberian cats can be quite large, sometimes achieving a weight of up to 20 pounds. 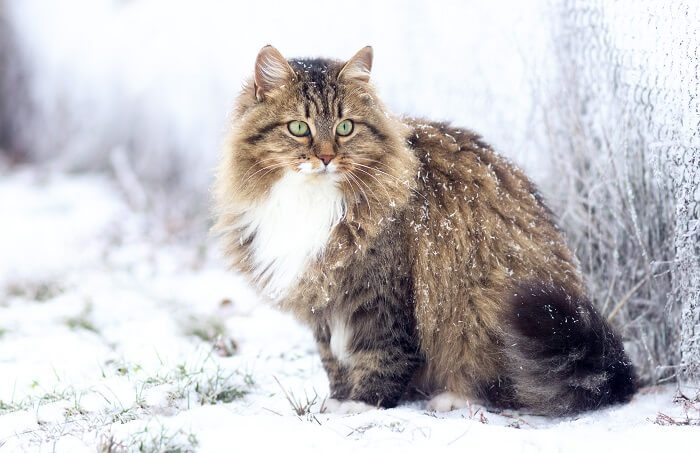 The eyes are medium to large, and nearly rounded in shape. The outer corners should angle slightly toward the ears. All eye colors are acceptable. There is no relationship between coat color and eye color, except in colorpoint Siberian cats, which should have blue eyes.

The legs should be of medium length with substantial boning. The hind legs should be slightly longer then the forelegs. The paws should be large and rounded. Prominent toe tufts are desirable.

The Siberian cat's tail should be of medium length with a wide base that tapers to a blunt tip. It should be thickly furnished.

The body is of medium length, with prominent musculature. The back is arched slightly higher than the shoulders, and the belly is barrel shaped but firm. A moderate stomach pad may be present on the lower abdomen. Siberian cats tend to feel heavy for their size.

The head is a modified wedge with rounded contours. It is in good proportion to the body. The muzzle is well rounded and males typically develop prominent jowls.

The Siberian cat has medium large ears with wide bases and rounded tips. The ears should be set as much on the sides of the head as on its top, and should have a forward tilt. Furnishings may be prominent and ear tipping may be present.

The coat is of medium to long length. The triple coat is most prominent in cooler weather, with a ruff at the collar, long belly hair, and long breeches.

All colors and patterns are accepted, with and without white, which may be present in any amount in any area. Buttons, lockets, and spots are allowed.

How much does a Siberian cat cost?

How big do Siberian cats get?

Siberian cats tend to be medium in size. A fully grown Siberian cat might weigh between 17-26 pounds or more and range in height anywhere from about 9"- 11" inches tall.

How long do Siberian cats live?

The Average lifespan for Siberian is 12-15 years.

Siberian are long-haired cats, so you do have to expect a certain amount of shedding from this breed, but they don't shed as much as other cat breeds.