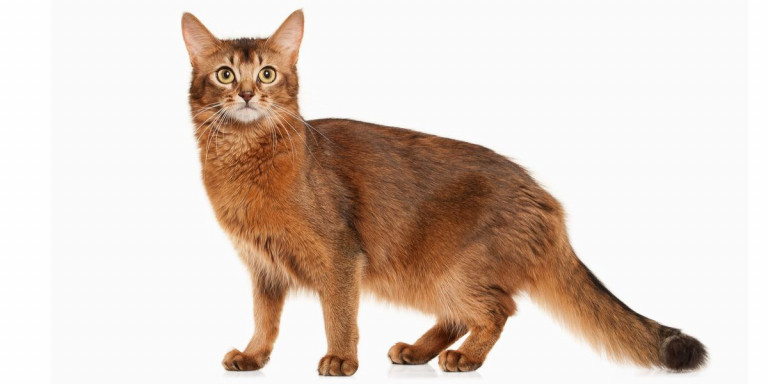 Temperament
? The breed’s dominant personality traits. While each individual has a unique personality, breed-specific genetics affect qualities like sociability, playfulness, and intelligence.
Outgoing, inquisitive, lively, family-oriented
Origin
? Where this breed was first established.
United States
Other Names
? In addition to their official names, most breeds earn a few nicknames.
Longhaired Abyssinian
Group
? Breeds are grouped by their size and coat type.
Medium-sized long-haired
Height
? The typical adult height among individuals of this breed. Height is measured from the top of the head to the bottom of the front paws.
8"- 10"
Body Length
? The typical adult body length among individuals of this breed. A cat’s length is measured from the base of the tail to the tip of the nose.
11"-14"
Weight
? The typical adult weight range of this cat breed.
8-12 pounds
Life Expectancy
? The average lifespan of the breed. While life expectancy is fairly consistent across all cat breeds, some breeds tend to live shorter or longer than others.
11-12 years
Price
? The average price.
$1000 - $1500
Affection Level
? Breeds with a high affection level want to give and receive a lot of attention, while less-affectionate breeds are not as interested in petting and snuggles.
0 100%
80%
Activity Level
? Breeds with high activity levels will engage more in active play and demand more space and attention.
0 100%
100%
Pet-Friendly
? How well the breed tends to get along with cats, dogs, and other pets.
0 100%
60%
Kid-Friendly
? Breeds with a higher rating in this area tend to be gentle and patient, while lower-rated breeds may feel uncomfortable with children.
0 100%
40%
Sociability
? Breeds with a higher sociability rating will want to spend time with you all day, while less-sociable breeds seldom seek out human interaction.
0 100%
80%
Intelligence
? Breeds with higher intelligence ratings are more curious, investigative, and easy to train. Less-intelligent breeds are less trainable but often laid-back and easygoing.
0 100%
80%
Playfulness
? Breeds that score higher in this area have strong hunting instincts that make them great playtime companions.
0 100%
100%
Independence
? Breeds that score higher in this area are able to spend hours alone, while less-independent breeds require plenty of attention.
0 100%
60%
Vocality
? A higher rating in this area indicates a breed prone to plenty of meowing and other vocalizations, while less-vocal breeds are happy to stay quiet.
0 100%
20%
Grooming
? Breeds with higher grooming scores require more maintenance like brushing and bathing, while lower-scored breeds are virtually maintenance-free.
0 100%
60%

About the Somali Cat

Can’t decide between an Abyssinian and a long-haired breed? The Somali cat offers the best of both worlds, with exquisitely soft ticked coats, striking facial markings, and all the personality that makes the Abyssinian such a popular breed.

If you bring a Somali cat into your family, be prepared for fun and games! These cats are curious, alert, and a bit mischievous. They like to watch people and wait for opportunities to get involved in whatever is happening.

Open a cupboard, they’ll be right there, ready to poke their heads inside. Place clothing inside drawers, and they’ll soon find a way to help! Run a faucet, and the Somali cat might dab a paw in the water. After a while, these cats develop the ability to open drawers, doors, and cupboards on their own, and turn on taps for themselves, so they can play in the water without your help.

When it’s time to rest, the Somali will happily curl up in the nearest lap, perhaps kneading with paws and giving affectionate head butts. On chilly winter nights, they offer extra cuddle power, helping their families appreciate those silky-soft, cuddly coats even more. 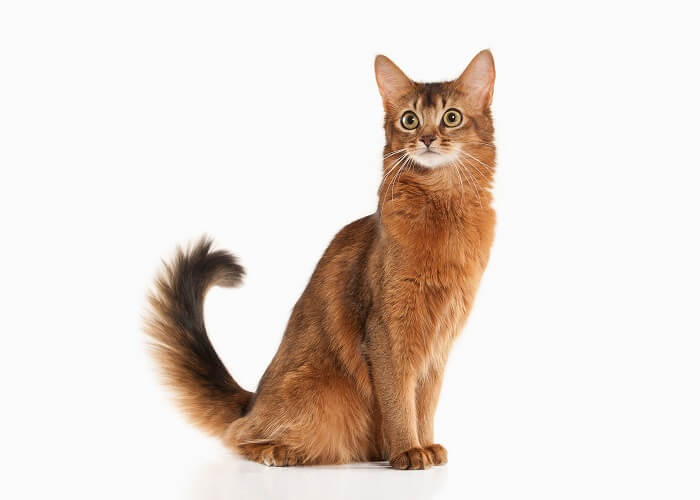 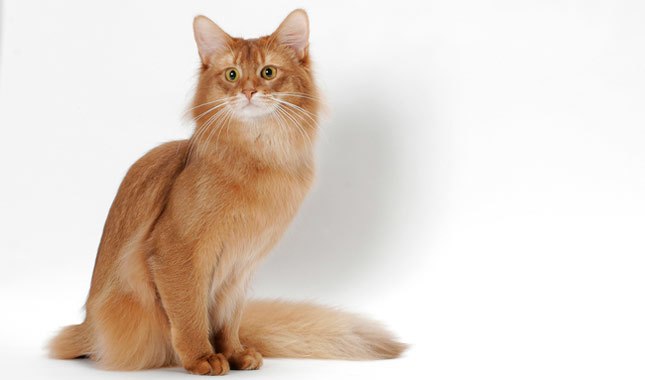 Somali cats have no unusual nutritional needs, although they thrive on a high-protein, low-carbohydrate diet. We recommend offering fresh food and/or a high-quality commercial brand that incorporates real meat or fish as the main ingredient.

As these cats are highly active, you might also wish to keep their claws trimmed to prevent excess damage to furnishings, clothing, and your skin.

The earlier you teach your kitten how to relax and enjoy grooming routines, the easier these tasks will be later in the cat’s life.

Somali cats are incredible athletes, easily making impressive long jumps and leaping to heights that might seem impossible. Renowned for their speed when racing from one room to the next, they typically enjoy big bursts of energy followed by a bit of down time.

It’s vital to provide space and appropriate structures for play when you share your home with a Somali cat. These kitties need a sturdy cat tree, at least one good scratching post, and plenty of toys including items that let you get in on the fun.

As friendly, outgoing individuals, Somalis often enjoy leashed walks outdoors. As with other routines, it’s easiest to teach a cat to walk on a leash from a young age, before habits have been fully formed.

Somali cats are typically robust and healthy. There are a few inherited diseases to be aware of including feline infectious anemia (FIA), autoimmune-mediated hemolytic anemia (AIHA), pyruvate kinase deficiency, myeldodysplasia, rentinal degeneration, osmotic fragility, and renal amyloidosis. None of these health issues are common.

The first individual to make a stir in the cat fancy world was Raby Chuffa of Selene, a long-haired Abyssinian cat that was shown in the United States. In 1963, a Canadian breeder named Mary Mailing entered a long-haired Aby into her local pet show. The show’s judge, Ken McGill, was so impressed that he asked for one of Mailing’s cats to breed.

We have an American breeder named Evelyn Mague to thank for naming the Somali breed. Cats from Ken McGill and another Canadian breeder named Don Richings were bred with Mague’s Somalis and international attention grew.

The Cat Fanciers Association (CFA) created the international Somali Cat Club in 1975, and granted the breed official recognition in 1979. It took over a decade for the Somali cat breed to achieve widespread international recognition. 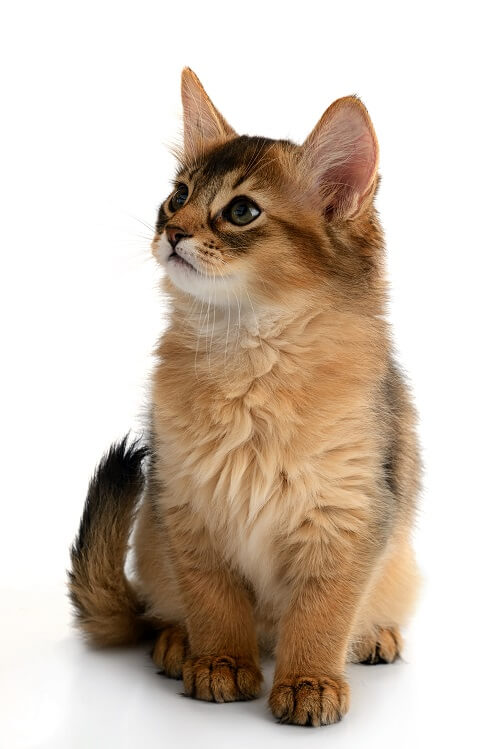 The Somali’s brilliant coat, large ears, and furry tails give the breed the nickname “Fox Cat.”

There are 28 Somali cat colors in all. Not all breed registries accept all colors.

Somali cats love to play fetch, so much so that they often develop a habit of bringing a favorite toy to a human playmate in anticipation of an exciting game. 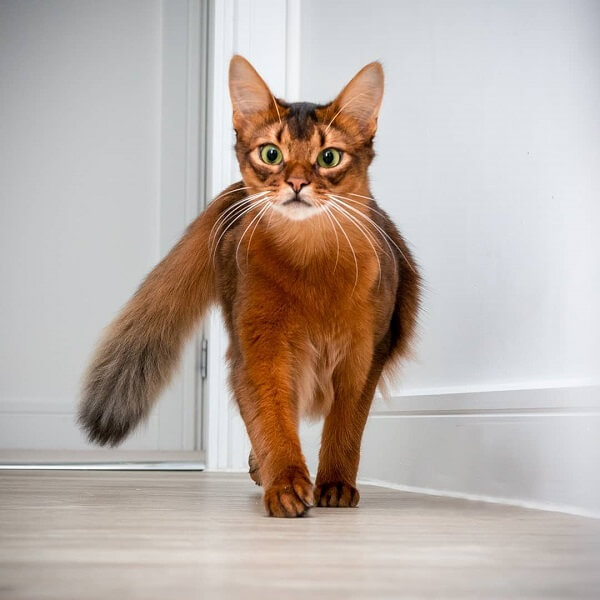 The eyes should be large, almond-shaped, and expressive, with dark lid skin encircled by a lighter colored area. The area above each eye should be accented with a short, dark, vertical line. A second fine pencil line should continue from the upper lid toward the base of the ear. A Somali cat’s eyes should be gold or green, with preference given to richer, deeper colors.

The legs should be well-proportioned and proportionate to the torso. The paws should be compact ovals.

The Somali is a medium to large cat with a medium-long torso that exhibits well-developed musculature. The overall impression should be that of a lean, graceful cat with a slightly arched back.

The Somali cat’s ears should have a large, alert appearance, preferably with horizontal tufts in the inner ear.

The Somali cat should have a fine double coat with ample density. The coat should be of medium length, with a ruff and breeches as well as a slightly shorter area of fur across the shoulders.

How much does a Somali cat cost?

How big do Somali cats get?

Somali cats tend to be medium in size. A fully grown Somali cat might weigh between 8-12 pounds or more and range in height anywhere from about 8"- 10" inches tall.

How long do Somali cats live?

The Average lifespan for Somali is 11-12 years.

Somali are long-haired cats, so you do have to expect a certain amount of shedding from this breed, but they don't shed as much as other cat breeds.