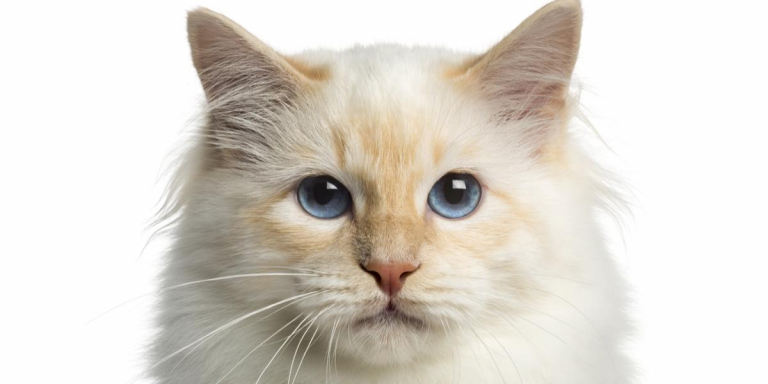 Temperament
? The breed’s dominant personality traits. While each individual has a unique personality, breed-specific genetics affect qualities like sociability, playfulness, and intelligence.
Relaxed, affectionate, inquisitive, intelligent
Origin
? Where this breed was first established.
Burma
Other Names
? In addition to their official names, most breeds earn a few nicknames.
Sacred cat of Burma
Group
? Breeds are grouped by their size and coat type.
Medium sized longhair
Height
? The typical adult height among individuals of this breed. Height is measured from the top of the head to the bottom of the front paws.
8"-11"
Body Length
? The typical adult body length among individuals of this breed. A cat’s length is measured from the base of the tail to the tip of the nose.
15"-18"
Weight
? The typical adult weight range of this cat breed.
6-14 pounds
Life Expectancy
? The average lifespan of the breed. While life expectancy is fairly consistent across all cat breeds, some breeds tend to live shorter or longer than others.
12-16 years
Price
? The average price.
$400 - $1,000
Affection Level
? Breeds with a high affection level want to give and receive a lot of attention, while less-affectionate breeds are not as interested in petting and snuggles.
0 100%
100%
Activity Level
? Breeds with high activity levels will engage more in active play and demand more space and attention.
0 100%
60%
Pet-Friendly
? How well the breed tends to get along with cats, dogs, and other pets.
0 100%
90%
Kid-Friendly
? Breeds with a higher rating in this area tend to be gentle and patient, while lower-rated breeds may feel uncomfortable with children.
0 100%
100%
Sociability
? Breeds with a higher sociability rating will want to spend time with you all day, while less-sociable breeds seldom seek out human interaction.
0 100%
90%
Intelligence
? Breeds with higher intelligence ratings are more curious, investigative, and easy to train. Less-intelligent breeds are less trainable but often laid-back and easygoing.
0 100%
80%
Playfulness
? Breeds that score higher in this area have strong hunting instincts that make them great playtime companions.
0 100%
70%
Independence
? Breeds that score higher in this area are able to spend hours alone, while less-independent breeds require plenty of attention.
0 100%
30%
Vocality
? A higher rating in this area indicates a breed prone to plenty of meowing and other vocalizations, while less-vocal breeds are happy to stay quiet.
0 100%
30%
Grooming
? Breeds with higher grooming scores require more maintenance like brushing and bathing, while lower-scored breeds are virtually maintenance-free.
0 100%
80%

About the Birman Cat

Also known as the sacred cat of Burma, the Birman cat is a large, long-haired breed with a heavy bone structure. Most of these cats exceed 12 pounds once they reach adulthood. Birman cats tend to be quiet, a bit shy with strangers, and they can be somewhat reserved even with people they know well. They have a tendency to attach themselves to a single person, so if you're someone who's looking for a loyal cat that loves you above all others, the Birman might be for you! Birman cats have soft, silky fur in a creamy, pale eggshell color. Darker points similar to the markings on a Siamese are present, along with white “mitts” or snowshoe feet. Stunning blue eyes are another unique feature of the Birman cat breed. 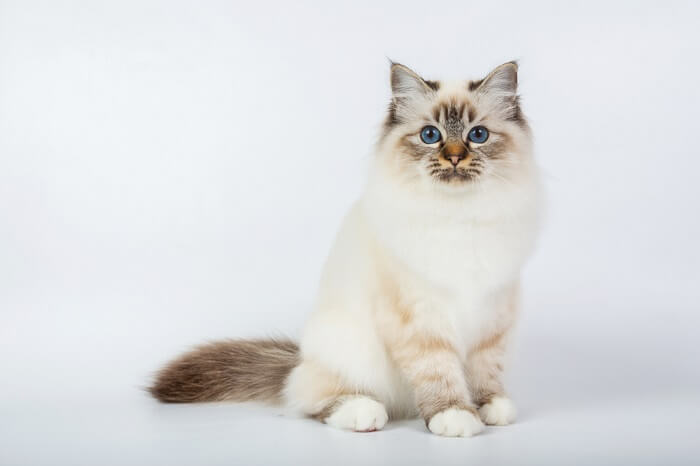 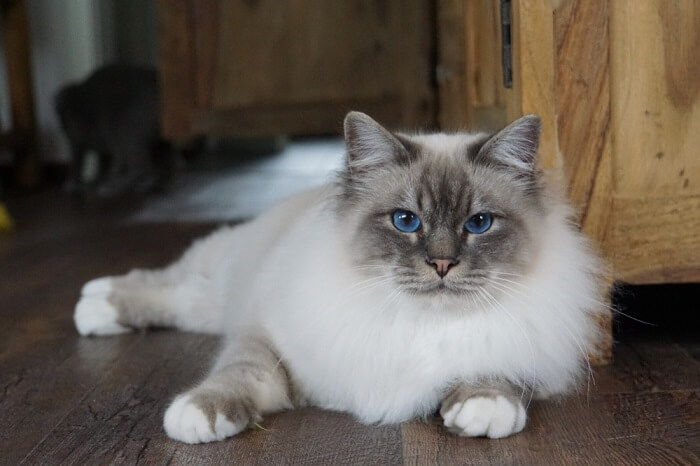 Birman cats do not have any special nutritional requirements, however they thrive on high-protein diets. We recommend feeding your Birman cat a high-quality cat food.

Even though Birman cats have long hair, they are relatively easy to care for compared with many other long-haired cat breeds. The Birman cat's hair is fine and silky, with a single coat that is not prone to matting. Routine brushing – at least once daily – will help keep this kitty's coat in great shape and provide both of you with a pleasant bonding experience.

You may also wish to brush your cat's teeth, and you may want to keep their toenails trimmed.

Birman cats need plenty of exercise each day and you may need to help them get it. These cats love to lounge; however, they will happily play with toys when encouraged to do so. A cat tree is ideal for napping, but it's also essential for stretching and climbing.

Catnip infused toys can bring out this normally sedate feline's playful side!

While the Birman cat has a reputation for overall good health, these kitties can be prone to obesity. Keep your cat active, and make sure that you are offering an appropriate, high-protein diet to help your cat maintain a healthy, comfortable weight.

Many cats come with unique stories attached, but the Birman is unique in that the breed is surrounded in mystery. As the legend goes, a Kittah priest called Mun-Ha was worshiping at the Temple of Lao-Tsun, accompanied by a white temple cat named Sinh.

Raiders entered the temple and killed Mun-Ha. As the priest lay dying, Sinh placed his feet on his body and faced the goddess Tsun-Kyan-Kse. The cat was transformed; his body turns to a golden color, his eyes turned blue, and his legs changed to brown. His feet remained white where they touched his master. Legend says that the Birman cat's white feet are a symbol of purity. At the same time, the rest of the temple cats were transformed, taking on the same appearance as Sinh.

The temple of Lao-Tsun was actually raided again in 1919. Two men, Major Gordon Russell and Auguste Pavie, came to the aid of the priests. As a gesture of gratitude, the priests gave the men a breeding pair of Birman cats, which were transported to France. It is believed that many Birman foundation cats were Siamese.

Sadly, the end of World War II saw only one pair of Birman cats remaining alive, even though the breed had begun to gain popularity. By the 1960s though, there were enough Birman cats to allow for importation into England. The breed gained popularity, and by 1966, was officially recognized by British cat fancy associations.

The first Birman cats arrived in America in 1959 and CFA granted the breed official recognition in 1967. 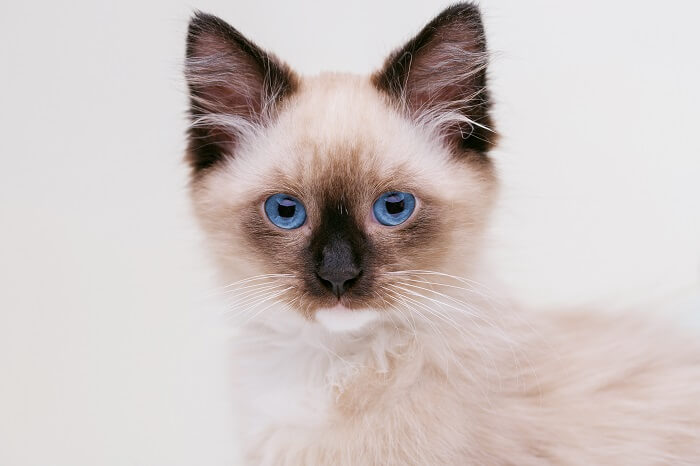 Birman cats have a jealous streak! If one of these cats claims you as their person, they will long for your attention and will become envious of other pets who steal the spotlight.

The Birman cat is chatty and vocal, but with a far softer voice then its close cousin, the Siamese. If you're looking for a quiet but communicative pet, this cat might be the ideal choice.

Just like other color point cats, Birmans are white at birth. They develop their coat colors as they age. It can take up to three years for these kitties to achieve their final color. 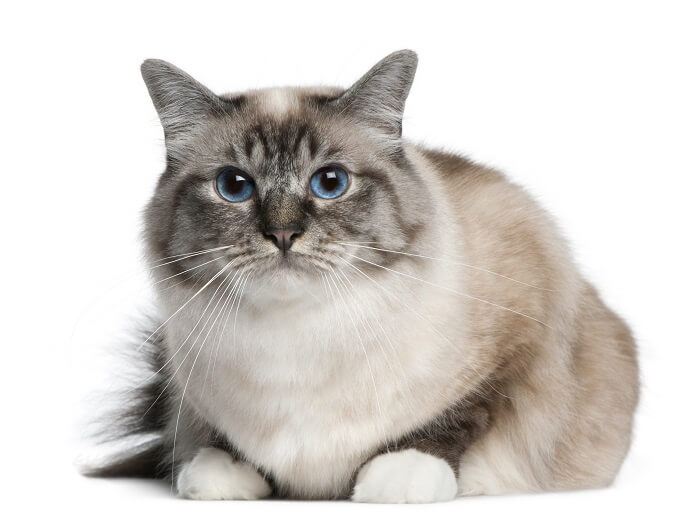 All Birman cats have round, blue eyes. Seal point Birman cats should have deep blue eye coloring. Cats with other coat colors display a lighter, brighter shade of blue.

The legs should be strong and well-proportioned, and should appear slightly short in comparison to the body. The feet should be well rounded. All Birman cats have white paws. The white may cover the toes only, or may extend as far up as the joint between the foot and the leg. Ideally, all four feet should have the same amount of white; however, judges do make exceptions, particularly when a cat's back paws display more white than front paws.

The Birman is a medium-sized cat with solid musculature.

The head should be well rounded, without strong angles or flatness. Features should be strong. The cheek should be full, and the four head should slope back. The nose should be of medium length and should begin just below the eyes. It should have a Roman shape. The chin should be full with a slight taper, but should not recede.

The coat should be a single layer with a fine, soft feel. There is a slight ruff around the neck.

At maturity, Birman cats are always color pointed, with the mask, ears, legs, and tail all clearly defined. The mask should cover the entire face, including the whisker pads, and should be connected to the ears by color tracings. The remainder of the coat should display a cream to golden tint and the belly should be an off-white color. Their coats colors may be sealed, chocolate, blue, lilac, cream, red, cinnamon, frost, or tortie. Their points may be solid or show a lynx pattern.

How much does a Birman cat cost?

How big do Birman cats get?

Birman cats tend to be medium in size. A fully grown Birman cat might weigh between 6-14 pounds or more and range in height anywhere from about 8"-11" inches tall.

How long do Birman cats live?

The Average lifespan for Birman is 12-16 years.

Birman are long-haired cats, so you do have to expect a certain amount of shedding from this breed, but they don't shed as much as other cat breeds.