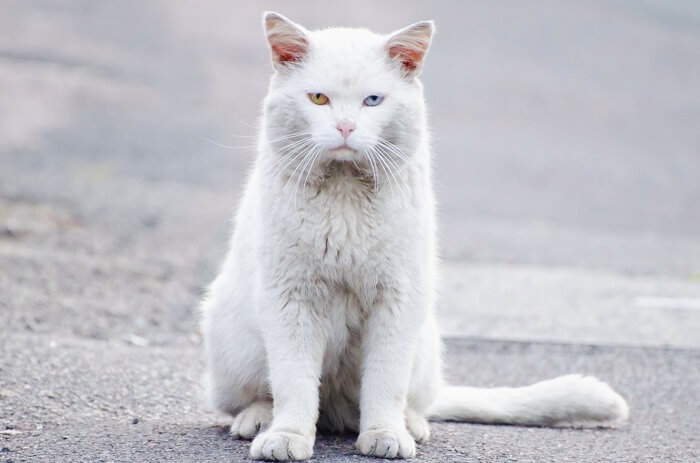 Temperament
? The breed’s dominant personality traits. While each individual has a unique personality, breed-specific genetics affect qualities like sociability, playfulness, and intelligence.
Active, affectionate, pleasant, playful
Origin
? Where this breed was first established.
Turkey
Other Names
? In addition to their official names, most breeds earn a few nicknames.
White Turkish Van, Van Kedi
Group
? Breeds are grouped by their size and coat type.
Large long-haired
Height
? The typical adult height among individuals of this breed. Height is measured from the top of the head to the bottom of the front paws.
9"- 11"
Body Length
? The typical adult body length among individuals of this breed. A cat’s length is measured from the base of the tail to the tip of the nose.
14"-17"
Weight
? The typical adult weight range of this cat breed.
7-19 pounds
Life Expectancy
? The average lifespan of the breed. While life expectancy is fairly consistent across all cat breeds, some breeds tend to live shorter or longer than others.
15-16 years
Price
? The average price.
$800 - $1500
Affection Level
? Breeds with a high affection level want to give and receive a lot of attention, while less-affectionate breeds are not as interested in petting and snuggles.
0 100%
100%
Activity Level
? Breeds with high activity levels will engage more in active play and demand more space and attention.
0 100%
100%
Pet-Friendly
? How well the breed tends to get along with cats, dogs, and other pets.
0 100%
100%
Kid-Friendly
? Breeds with a higher rating in this area tend to be gentle and patient, while lower-rated breeds may feel uncomfortable with children.
0 100%
80%
Sociability
? Breeds with a higher sociability rating will want to spend time with you all day, while less-sociable breeds seldom seek out human interaction.
0 100%
80%
Intelligence
? Breeds with higher intelligence ratings are more curious, investigative, and easy to train. Less-intelligent breeds are less trainable but often laid-back and easygoing.
0 100%
100%
Playfulness
? Breeds that score higher in this area have strong hunting instincts that make them great playtime companions.
0 100%
100%
Independence
? Breeds that score higher in this area are able to spend hours alone, while less-independent breeds require plenty of attention.
0 100%
80%
Vocality
? A higher rating in this area indicates a breed prone to plenty of meowing and other vocalizations, while less-vocal breeds are happy to stay quiet.
0 100%
80%
Grooming
? Breeds with higher grooming scores require more maintenance like brushing and bathing, while lower-scored breeds are virtually maintenance-free.
0 100%
40%

About the Turkish Vankedisi Cat

Stunning white cats with silky coats, Turkish Vankedisi cats offer more than just great looks: These kitties are friendly and personable, but not quite so clingy as some other breeds such as the Oriental Shorthair.

Turkish Vankedisi cats are incredibly intelligent. They are fond of attention and one of their favorite ways to get it is by encouraging their human friends to play. Don't be surprised if your kitty presents you with a favorite toy in hopes of getting you involved in a game of fetch!

Turkish Vankedisi cats have a tendency to pick a single family member as their favorite, however they are likely to make friends with everyone in the house, including other pets.

Although these kitties look as if they'd rather not muss up their coats, they are athletes at heart. Turkish Vankedisi cats are renowned for their jumping and climbing abilities, and they are exceptional hunters when given the opportunity. In addition, there one of the few breeds that takes very well to leash training. If you've ever wanted to walk your cat through the neighborhood, a Turkish Vankedisi will be happy to accompany you. 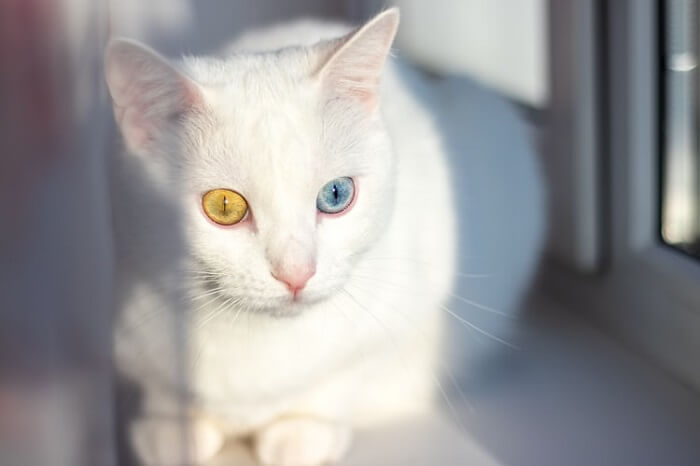 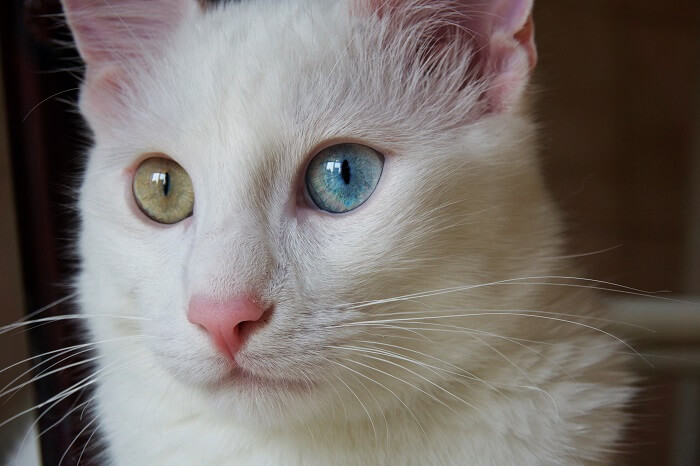 Turkish Vankedisi cats have no special nutritional needs. If you're not interested in feeding your cat fresh food, we recommend offering them a high-quality commercial brand that relies on real meat or real fish as the number one ingredient. Consider choosing a brand with supplemental omega fatty acids for healthy skin and a healthy, shiny coat.

The Turkish Vankedisi might look like a cat that requires lots of maintenance, but the opposite is true. A quick daily brushing will help keep their coat feeling cashmere-soft and free from tangles.

Routine nail trimming can save your furniture from damage, and regular toothbrushing can help prevent periodontal disease. It's best to teach your kitty to accept these grooming rituals beginning at a young age.

Turkish Vankedisi cats like to nap just as much as other felines, but they tend to be highly active between snooze sessions. These kitties have a natural appreciation for the highest vantage point they can find, so consider treating your pet to a tall cat condo and don't be surprised if they routinely make their way onto other high places in your home. A well-stocked basket of toys is a must have; without plenty of approved playthings, these kitties will quickly find alternatives and make their own fun.

Turkish Vankedisi cats are exceptionally healthy in general, however they can suffer from communicable diseases just as members of other cat breeds can.

These kitties are often deaf, particularly if they have blue eyes. Odd-eyed Turkish Vankedisi cats sometimes suffer from deafness in the ear that's located on the same side as the blue eye.

Turkish Vankedisi cats - known as Van Kedi in their native Turkey - share the same history as Turkish Van cats. The breed originates in Eastern Turkey; specifically, it was first noted in the Van region. In fact, the name “Vankedisi” translates to “cat from Van” in Turkish.

The breed is a naturally occurring variety of landrace cat, meaning that individuals breed freely among one another, and distinguishing them from standardized cat breeds that were developed through human intervention and selective breeding. Most feline registries make no distinction between the Turkish Van vs. the Turkish Vankedisi. Instead of classifying these pure white cats as a distinct breed, they’re shown and judged alongside their van-marked cousins.

In Turkey, the opposite is true. There, locals only classify all-white individuals as Van cats, even though the marked variety shares all traits but coat color.

Because of a genetic predisposition to deafness, white Turkish Vankedisi cats are rarely bred to one another. Instead, breeders tend to pair a Van cat with a Vankedisi. The resulting litters may contain both Turkish Van and Vankedisi cats.

Count yourself fortunate if you’re able to adopt one of these amazing kitties! Both Van and Vankedisi cats are rare, even in their native Turkey. 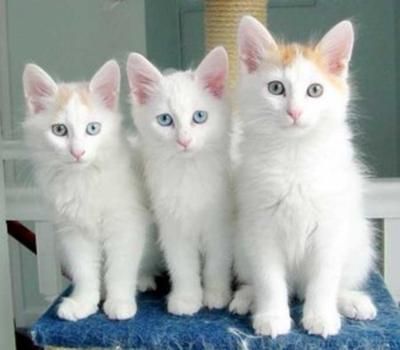 Turkish Vankedisi cats may look like shorthaired cats during their first few years. It can take between three and five years for these kitties to develop their full coat and attain full maturity.

The Turkish Vankedisi cat loves to swim and play in water. Give them a big, shallow dish of water and let the fun begin!

Turkish Vankedisi cats are not always registered as Vankedisikedisi. Some cat registries allow all white coloration. 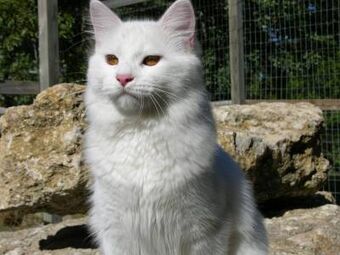 The eyes should be moderately large, rounded, and set at a slant. Amber, blue, and odd eye colors are acceptable. Blue eyes and odd eyes are often seen as more desirable than amber eyes.

The Turkish Vankedisi should have a long, well-proportioned tail with a full plume that flows well with the remainder of the cat’s coat.

The head should be a broad wedge, with gentle contours and a medium-length nose. The muzzle should be rounded, the chin should be firm, and the cheekbones should be prominent.

The Turkish Vankedisi cat should have moderately large ears that are set high on the head and spaced far apart. The tips should be slightly rounded and the interior should be well furnished.

The coat should be semi-long, with no undercoat. The summer coat appears shorter and less dense than the winter coat; some individuals may appear nearly shorthaired during the summer months.

How much does a Turkish Vankedisi cat cost?

How big do Turkish Vankedisi cats get?

The Average lifespan for Turkish Vankedisi is 15-16 years.

Turkish Vankedisi are long-haired cats, so you do have to expect a certain amount of shedding from this breed, but they don't shed as much as other cat breeds.