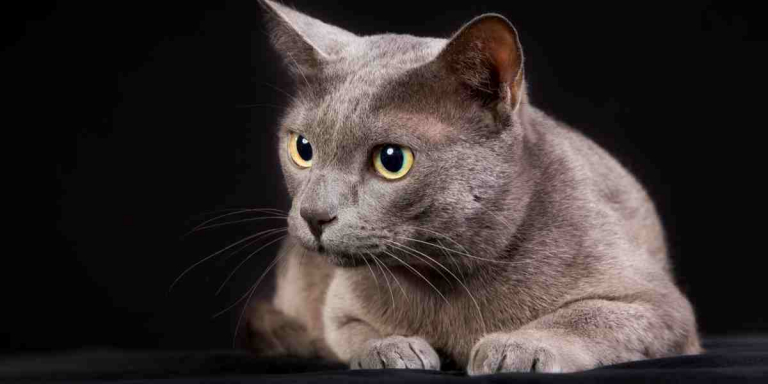 Temperament
? The breed’s dominant personality traits. While each individual has a unique personality, breed-specific genetics affect qualities like sociability, playfulness, and intelligence.
Enchanting, strong-willed, alert, active
Origin
? Where this breed was first established.
Thailand
Other Names
? In addition to their official names, most breeds earn a few nicknames.
Si Sawat cat, Malet cat, Good Luck cat
Group
? Breeds are grouped by their size and coat type.
Medium-sized short-haired
Height
? The typical adult height among individuals of this breed. Height is measured from the top of the head to the bottom of the front paws.
10"-14"
Body Length
? The typical adult body length among individuals of this breed. A cat’s length is measured from the base of the tail to the tip of the nose.
12"-18"
Weight
? The typical adult weight range of this cat breed.
6-10 pounds
Life Expectancy
? The average lifespan of the breed. While life expectancy is fairly consistent across all cat breeds, some breeds tend to live shorter or longer than others.
12-15 years
Price
? The average price.
$400-$2,000
Affection Level
? Breeds with a high affection level want to give and receive a lot of attention, while less-affectionate breeds are not as interested in petting and snuggles.
0 100%
100%
Activity Level
? Breeds with high activity levels will engage more in active play and demand more space and attention.
0 100%
80%
Pet-Friendly
? How well the breed tends to get along with cats, dogs, and other pets.
0 100%
70%
Kid-Friendly
? Breeds with a higher rating in this area tend to be gentle and patient, while lower-rated breeds may feel uncomfortable with children.
0 100%
80%
Sociability
? Breeds with a higher sociability rating will want to spend time with you all day, while less-sociable breeds seldom seek out human interaction.
0 100%
80%
Intelligence
? Breeds with higher intelligence ratings are more curious, investigative, and easy to train. Less-intelligent breeds are less trainable but often laid-back and easygoing.
0 100%
100%
Playfulness
? Breeds that score higher in this area have strong hunting instincts that make them great playtime companions.
0 100%
80%
Independence
? Breeds that score higher in this area are able to spend hours alone, while less-independent breeds require plenty of attention.
0 100%
40%
Vocality
? A higher rating in this area indicates a breed prone to plenty of meowing and other vocalizations, while less-vocal breeds are happy to stay quiet.
0 100%
70%
Grooming
? Breeds with higher grooming scores require more maintenance like brushing and bathing, while lower-scored breeds are virtually maintenance-free.
0 100%
10%

About the Korat Cat

Stunning blue-gray fur is only the beginning: The Korat cat is considered to be a living good luck charm in it's native Thailand. Whether you're in search of good fortune or if you're simply hoping to grace your home with a loving, intelligent cat, the Korat may be the perfect pet! This is among the rarest of all cat breeds, so you’ll certainly count yourself fortunate when you find the perfect Korat kitten to spoil.

Korat cats are closely related to Siamese, and share some of their cousin's most endearing personality traits. These kitties love attention, and they enjoy being involved in every aspect of household management: Whether you're fixing lunch, cleaning up after dinner, folding laundry, or catching up on your favorite show, the Korat cat will be on hand to offer advice and a helping paw.

A little less chatty than the Siamese, the Korat might greet you a chirping meow or give you an insistent tap when you aren't offering quite enough attention.

Playful and friendly, Korat cats tend to get along well with everyone including kids, other cats, and well behaved dogs. Fun and games make this cat's world go round, and the more you interact, the happier your relationship will be. Once playtime is over, the Korat cat will eagerly snuggle up next to you. 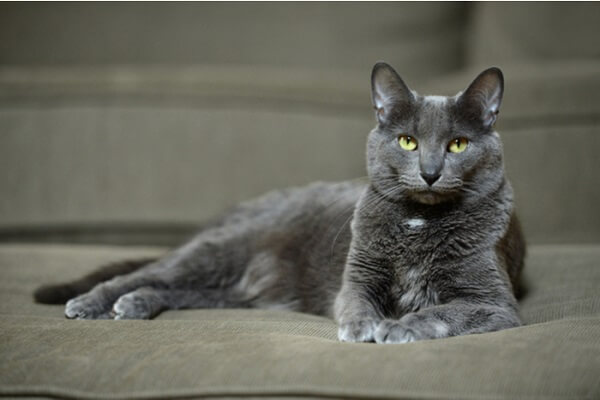 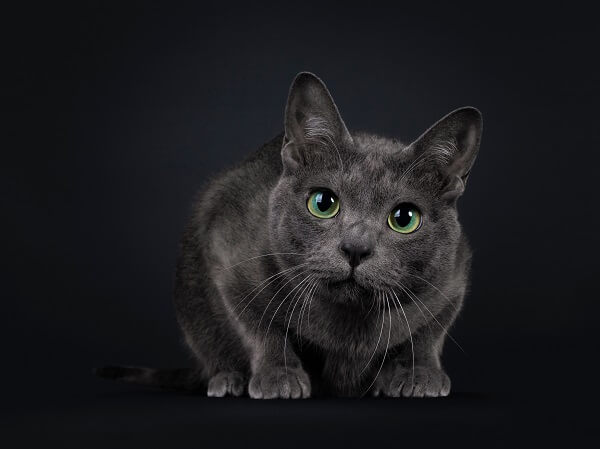 Korat cats have no special nutritional needs, however they thrive on a high-protein diet without a lot of added carbs. These cats look and feel their best when high-quality food with real meat or real fish as the first ingredient is the mainstay of their diet. If you are able, consider offering your cat a fresh diet.

Korat cats have short, easy-care fur that doesn't require much attention from their human companions. Consider brushing your cat once a week to remove loose hair and reduce shedding, and follow up with a quick polish using a chamois or a silk scarf to bring out the shine in their gorgeous gray coat.

Consider your home the Korat's personal playground! These cats love to run, jump, and climb. Tall cat trees, scratching posts, and plenty of toys help save your favorite belongings from damage while providing your cat with safe, socially acceptable ways to meet their physical activity needs.

Korat cats appreciate interaction from their human and animal companions. For those times when you are not available to play fetch or dangle a feather wand for your kitty, consider food puzzles and other engaging toys. Without appropriate methods of mental stimulation, these intelligent cats quickly find ways to amuse themselves, getting into cupboards and drawers and playing with your belongings.

Korat cats are generally healthy, however they are sometimes born with a fatal genetic condition called gangliosidosis, which disrupts normal cellular function and ultimately causes damage to the central nervous system. Cats with GM1 gangliosidosis show signs of neurologic disease including impaired vision and seizures by about three months of age, and are not likely to survive past their first year.

Korat cats with GM2 gangliosidosis typically show neurologic signs at an age as early as four weeks, and typically do not survive past the age of eight months.

Fortunately, reputable Korat breeders are able to test parents, greatly reducing the likelihood that offspring will be affected by this terrible genetic disease.

Natives of Phimai, Thailand, Korat cats are named after the Nakhon Ratchasima province, which is nicknamed Korat by the people of Thailand. Interestingly, the Korat cat is locally known as Si Sawat, which translates to "The color of sawat seed." Korat cats are first mentioned in the Thai Tamra Maew, also known as The Cat-Book Poems, which features entries that were written beginning as early as 1350 CE.

Until recently, Korat cats were only given away as gifts; they were never sold. At times, they were gifted to important community members as a sign of respect and appreciation. Korat cats eventually made their way to Britain, where they were called Blue Siamese. Since these cats did not conform to Siamese standards, they were sometimes shown in Russian or "Any Other Blue" classes. A cat breeder named Mrs. B. Spearman had a deep appreciation for these graceful feline and attempted to import more of them into England, but was unsuccessful.

Korat cats appeared in the West again when Cedar Glen Cattery imported a breeding pair to the US in 1959. CFA granted the Korat cat championship status in 1966 and today, these incredible cats are recognized by breed registries worldwide.

Even though these cats are incredibly desirable, the Korat remains notoriously difficult to find. 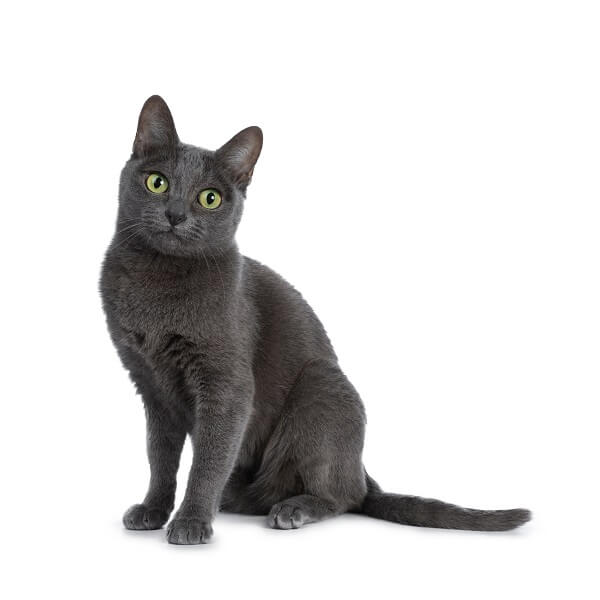 Pairs of Korat cats were once given to newlywed couples in hope of bringing good luck to their homes and families.

The Korat cat is featured on a popular Thai postage stamp.

Some of the first "solid blue Siamese cats" exhibited in England during the late 19th century were probably Korats. 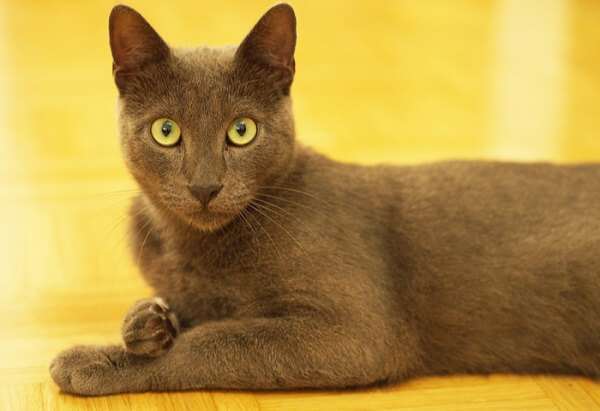 The eyes should be large, round, and wide open, with a slightly Asian slant when closed or partially closed. Brilliant green is the preferred eye color, however an Amber cast is acceptable. Korat kittens and adolescents may display yellow to amber eyes. Final eye color is not fully achieved until maturity, normally between the age of 2 to 4 years.

The legs should be well proportioned, with the front legs being slightly shorter than the back legs. The paws should be oval shaped.

A Korat cat's tail should be of medium length, with a heavier base and a taper that ends in a rounded tip.

The body should be of small to medium size, with fine musculature. The cat should feel heavier than it appears.

The Korat cat has a signature heart -shaped head. The eyebrow ridges form the heart's upper edges, and the sides of the face curve to the chin, completing the heart shape. When viewed in profile, the head should be well-defined, with a slight stop between the nose and forehead. The chin and jaw should be well-developed, but not sharply pointed or overly squared.

The ears should be large, with flared bases and rounded tips. They should be set high on the head. Furnishings should be sparse.

The Korat cat has a single hair coat that lies close to the body. The hair should be soft and silky.

Korat cats should display silver-tipped blue coloring all over, with enough silver at the tips to create a silver halo effect. Kittens may display ghost tabby markings that fade with maturity. Adult Korat cats with ghost tabby markings or spots of any kind make wonderful pets but are disqualified from the show ring. The nose leather and lips should be lavender to dark blue. Paw pads should be dark blue or lavender with a pinkish tinge.

How much does a Korat cat cost?

How big do Korat cats get?

Korat cats tend to be medium in size. A fully grown Korat cat might weigh between 6-10 pounds or more and range in height anywhere from about 10"-14" inches tall.

How long do Korat cats live?

The Average lifespan for Korat is 12-15 years.

Korat are short-haired cats. Therefore, they do not shed as much as long-haired cat breeds.