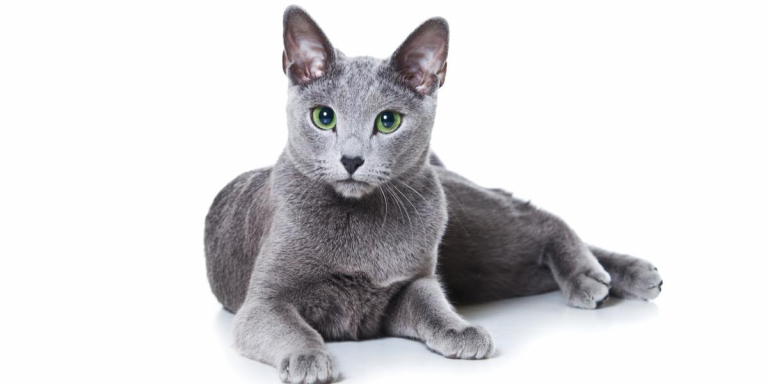 Temperament
? The breed’s dominant personality traits. While each individual has a unique personality, breed-specific genetics affect qualities like sociability, playfulness, and intelligence.
Affectionate, playful, inquisitive, family-oriented
Origin
? Where this breed was first established.
Russia
Other Names
? In addition to their official names, most breeds earn a few nicknames.
Archangel Blue, Archangel Cat
Group
? Breeds are grouped by their size and coat type.
Medium-sized short-haired
Height
? The typical adult height among individuals of this breed. Height is measured from the top of the head to the bottom of the front paws.
8"- 10"
Body Length
? The typical adult body length among individuals of this breed. A cat’s length is measured from the base of the tail to the tip of the nose.
15"-18"
Weight
? The typical adult weight range of this cat breed.
10-14 pounds
Life Expectancy
? The average lifespan of the breed. While life expectancy is fairly consistent across all cat breeds, some breeds tend to live shorter or longer than others.
10-16 years
Price
? The average price.
$1000 - $1700
Affection Level
? Breeds with a high affection level want to give and receive a lot of attention, while less-affectionate breeds are not as interested in petting and snuggles.
0 100%
60%
Activity Level
? Breeds with high activity levels will engage more in active play and demand more space and attention.
0 100%
60%
Pet-Friendly
? How well the breed tends to get along with cats, dogs, and other pets.
0 100%
60%
Kid-Friendly
? Breeds with a higher rating in this area tend to be gentle and patient, while lower-rated breeds may feel uncomfortable with children.
0 100%
60%
Sociability
? Breeds with a higher sociability rating will want to spend time with you all day, while less-sociable breeds seldom seek out human interaction.
0 100%
60%
Intelligence
? Breeds with higher intelligence ratings are more curious, investigative, and easy to train. Less-intelligent breeds are less trainable but often laid-back and easygoing.
0 100%
80%
Playfulness
? Breeds that score higher in this area have strong hunting instincts that make them great playtime companions.
0 100%
60%
Independence
? Breeds that score higher in this area are able to spend hours alone, while less-independent breeds require plenty of attention.
0 100%
80%
Vocality
? A higher rating in this area indicates a breed prone to plenty of meowing and other vocalizations, while less-vocal breeds are happy to stay quiet.
0 100%
20%
Grooming
? Breeds with higher grooming scores require more maintenance like brushing and bathing, while lower-scored breeds are virtually maintenance-free.
0 100%
40%

About the Russian Blue Cat

Also known as the Archangel Blue or Archangel Cat, the Russian Blue is a stunning feline, not to mention a marvelous companion. With soft, silky, short coats in various shades of silvery blue-gray, these kitties happily accompany their family members around the house, but are prone to hiding away when strangers visit.

The Russian Blue isn't much of a mischief maker. It's true that these cats will get into things during their kitten years, but once you've gently taught them which surfaces are theirs to sit on and which should be left alone, they'll generally stick to approved areas.

This isn't all they are capable of learning: Russian Blue cats are highly intelligent and will easily learn to open doors, play fetch, come when called, and more. This capability does not place them in the doglike cat category though; because they can be skittish and shy, Russian Blue cats do not typically take to leash training. They are far happier sticking to known quantities and spending time with their families.

If you bring a Russian Blue into your home, you'll have a steadfast companion with a fondness for daily routines and gentle cuddles, along with a fairly strong opinion about everything that takes place in the household. While their families are away at work, these kitties will happily nap instead of looking for ways to entertain themselves. They do learn to get along with other pets and they can appreciate respectful children, but they don't need constant companionship. 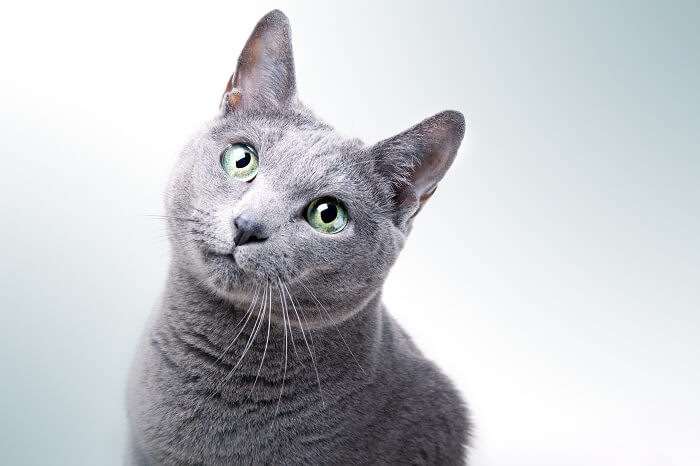 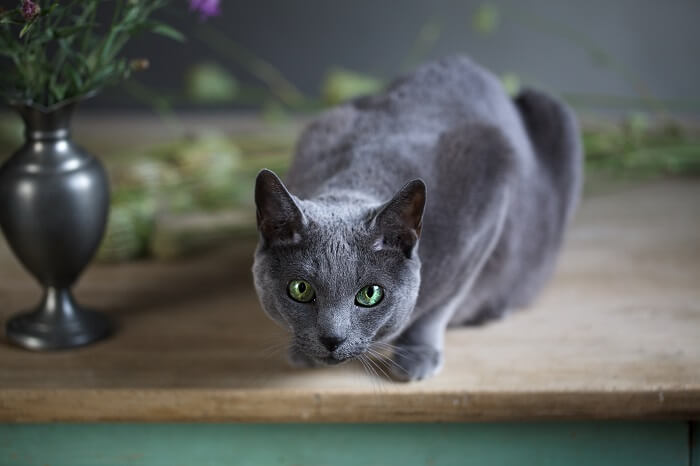 The Russian Blue has no special nutritional needs; however, we recommend providing your cat with a high-quality diet. Fresh food is an excellent choice and high-protein, low carbohydrate commercial foods that incorporate real fish or real meat as the main ingredient are preferable to high carbohydrate diets that can contribute to obesity.

Thanks to its short, easy care coat, the Russian Blue cat doesn't require much help in the grooming department. These cats benefit from a weekly brushing, which helps remove loose hair and cuts back on shedding.

You may also wish to teach your cat to allow you to brush their teeth, and you may want to provide regular nail trimming.

Even though Russian Blue cats are renowned for their dignified nature, they do have a playful streak. These cats have plenty of fun with toys they can enjoy on their own as well as interactive toys like feathered wands and lasers. In addition, they appreciate a multilevel cat tower, particularly if it has compartments for sleeping and hiding. Scratching posts are essential as well.

Since the Russian Blue is a naturally occurring breed, most members enjoy good health. These kitties can be prone to some of the same feline diseases that affect other cats including hypertrophic cardiomyopathy, kidney disease, obesity, and periodontal disease.

With its incredible coloration, you might think that the Russian Blue cat was carefully developed by feline geneticists – but the truth is, this is a naturally occurring breed. Believed to originate in Russia's Archangel Isles around the port of Arkhangelsk, these cats probably accompanied sailors to Northern Europe and Great Britain during the 1860s. The first Archangel Cat was shown at London's Crystal Palace in 1875 and ever since then, these amazing cats have been highly coveted.

Despite its unique origin, the Russian Blue was shown alongside all other blue cats until it was given its own show class in 1912. Following the second world war, the Russian Blue experienced a population collapse as so many cat breeds did at that time. Breeders, mostly in Scandinavia and England, worked to bring numbers back up, often crossbreeding with Siamese.

Once these cats reached the shores of the United States, breeders allowed British Russian Blue and Scandinavian Russian Blue cat bloodlines to mingle, gradually breeding out Siamese traits. At the same time, Russian Blue cats have contributed to the creation of other breeds including the Nebelung, which is sometimes called the long-haired Russian Blue. The Havana Brown was also developed with the help of Russian Blues, and some Oriental Shorthairs carry Russian Blue DNA as well.

Russian Blue cats are recognized by cat breed associations all over the world.

It's important to note that Russian Blue cats are separated from Russian White, Russian Black, and Russian Tabby cats by many associations. For example, the Cat Fanciers Association (CFA) only recognizes the blue color, as does Federation Internationale Feline (FIFe). 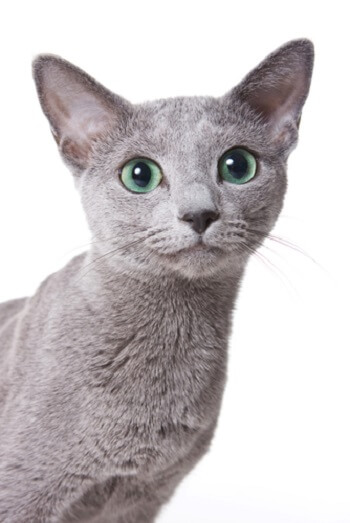 The Russian Blue’s coat is so thick that it’s possible to use a finger to “draw” a pattern that will remain in the coat until you smooth the fur back into place.

Many of these cats enjoy exceptional longevity. The average lifespan of a Russian Blue cat is 10 to 20 years, with some individuals living as long as 25 years. 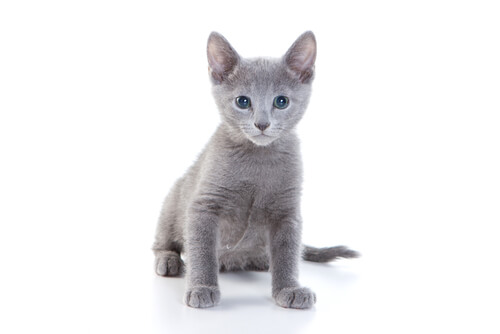 The eyes should be rounded and set wide apart. All Russian Blue cats should have vivid green eyes.

The legs should be long and fine-boned, and the paws should be small with a slightly rounded profile.

The Russian Blue cat should have a long tail that is well-proportioned when compared to the body. The tail should taper from base to tip.

Russian Blue cats are generally of medium size, with fine boning and a graceful, athletic appearance.

The head should form a medium wedge shape that is neither too short nor too long. The muzzle should have a blunt shape, and should continue the overall wedge shape of the head. There should be no visible nose break, nor should there be prominent whisker pads.

The Russian Blue cat has fairly large ears with wide bases, pointed tips, and nearly translucent skin. The ears should have scant furnishing, and leather should show through the outer hair on the ears.

The double coat should be thick and luxurious, with a dense, fine texture. Hairs should stand out from the body, and should offer a very soft, silky feel.

Russian Blue cats display an even “bright blue” color, with lighter shades preferred over darker hues. There should be a noticeable difference between the ground color and the tipping, with all guard hairs having a silver color. No tabby “ghost stripes” should be visible. The nose leather should be slate grey, and the paw pads should be a mauve to lavender pink color.

How much does a Russian Blue cat cost?

How big do Russian Blue cats get?

Russian Blue cats tend to be medium in size. A fully grown Russian Blue cat might weigh between 10-14 pounds or more and range in height anywhere from about 8"- 10" inches tall.

The Average lifespan for Russian Blue is 10-16 years.

Russian Blue are short-haired cats. Therefore, they do not shed as much as long-haired cat breeds.