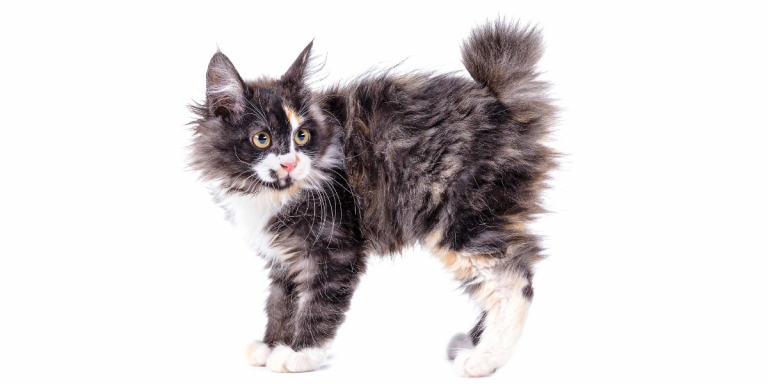 Temperament
? The breed’s dominant personality traits. While each individual has a unique personality, breed-specific genetics affect qualities like sociability, playfulness, and intelligence.
Playful, energetic, affectionate, friendly
Origin
? Where this breed was first established.
Russia
Other Names
? In addition to their official names, most breeds earn a few nicknames.
Kuril Islands Bobtail, Kurilean Bobtail, Curilsk Bobtail, Kuril Bobtail
Group
? Breeds are grouped by their size and coat type.
Medium to large short-haired and long-haired
Height
? The typical adult height among individuals of this breed. Height is measured from the top of the head to the bottom of the front paws.
10"-14"
Body Length
? The typical adult body length among individuals of this breed. A cat’s length is measured from the base of the tail to the tip of the nose.
14"-16"
Weight
? The typical adult weight range of this cat breed.
8-12 pounds
Life Expectancy
? The average lifespan of the breed. While life expectancy is fairly consistent across all cat breeds, some breeds tend to live shorter or longer than others.
14-20 years
Price
? The average price.
$700-$3,000
Affection Level
? Breeds with a high affection level want to give and receive a lot of attention, while less-affectionate breeds are not as interested in petting and snuggles.
0 100%
100%
Activity Level
? Breeds with high activity levels will engage more in active play and demand more space and attention.
0 100%
100%
Pet-Friendly
? How well the breed tends to get along with cats, dogs, and other pets.
0 100%
100%
Kid-Friendly
? Breeds with a higher rating in this area tend to be gentle and patient, while lower-rated breeds may feel uncomfortable with children.
0 100%
100%
Sociability
? Breeds with a higher sociability rating will want to spend time with you all day, while less-sociable breeds seldom seek out human interaction.
0 100%
100%
Intelligence
? Breeds with higher intelligence ratings are more curious, investigative, and easy to train. Less-intelligent breeds are less trainable but often laid-back and easygoing.
0 100%
100%
Playfulness
? Breeds that score higher in this area have strong hunting instincts that make them great playtime companions.
0 100%
90%
Independence
? Breeds that score higher in this area are able to spend hours alone, while less-independent breeds require plenty of attention.
0 100%
50%
Vocality
? A higher rating in this area indicates a breed prone to plenty of meowing and other vocalizations, while less-vocal breeds are happy to stay quiet.
0 100%
60%
Grooming
? Breeds with higher grooming scores require more maintenance like brushing and bathing, while lower-scored breeds are virtually maintenance-free.
0 100%
30%

About the Kurilian Bobtail Cat

With a thick, luxurious coat that's often beautifully marked to resemble a wildcat's fur, the Kurilian Bobtail cat is renowned for having a sweet, gentle nature. Like the breed's name suggests, Kurilian Bobtail cats have short to ultra-short bobtails. Kurilians have one of a kind tails. Sometimes compared with a snowflake or a fingerprint, no tail is identical to another.

Big, active, and intelligent, the Kurilian Bobtail cat has an intense play drive and a natural love for hunting. This breed is renowned for its fishing skill as well, so families with aquariums and tiny pets such as hamsters and guinea pigs will want to ensure that these vulnerable animals are kept far from the Kurilian Bobtail, which views all small creatures as prey to be captured.

Kurilian Bobtail cats typically get along very well with other cats, dogs, and children. They love to play, and anyone who is willing to spend time engaged in rousing games will automatically get this cat's undivided attention.

Despite its hunting prowess and high activity level, the Kurilian Bobtail cat loves to snuggle with its favorite person. These cats do have a tendency to choose a preferred companion, and they are also known to give other family members the cold shoulder when it's time to choose a lap for TV time or settle in at bedtime. 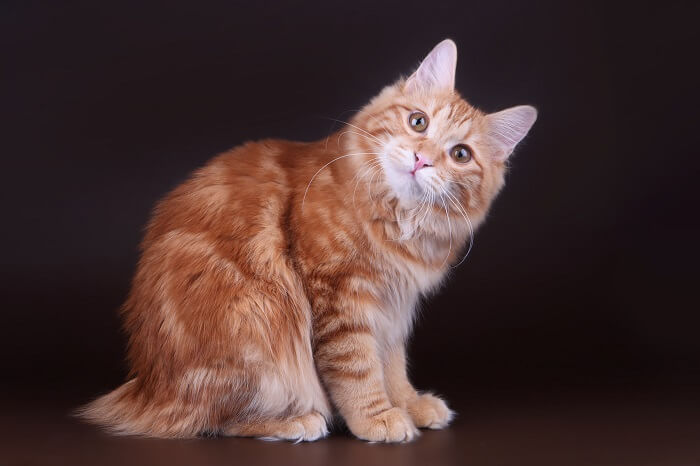 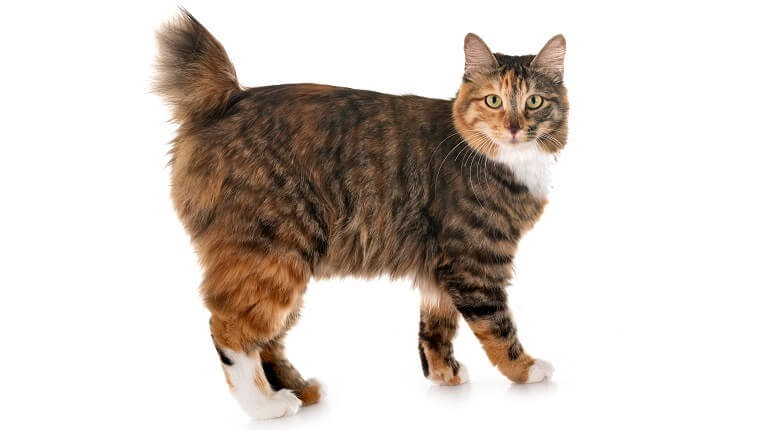 Kurilian Bobtail cats have no special nutritional needs, however it is best to offer a diet that is high in protein with limited carbohydrates. We recommend choosing fresh food or offering a commercial brand that lists real meat or fish as the number one ingredient.

This breed is exceptionally athletic and will show off its ability to reach high speeds, make sharp turns, and climb as high as possible anytime it is given the opportunity. Kurilian Bobtail cats are highly trainable, and may appreciate learning how to walk on a leash so that they may safely enjoy the outdoors.

Inside, Kurilian Bobtail cat requires multiple scratching posts, at least one sturdy cat tree, and plenty of exciting toys. These cats appreciate window seats that provide them with a view of the outdoors, particularly if a bird feeder is involved.

The Kurilian Bobtail cat has a reputation for excellent health and can have an exceptionally long lifespan that extends up to 20 years. No known genetic issues are present.

The Kurilian Bobtail is native to the Kuril Islands, which give it its name. The breed is also native to Russia's Kamchatka Peninsula and Sakhalin Island, which are located in the same geographic region.

The Kurilian Bobtail is a natural cat breed, meaning that it was developed by natural selection over time rather than via any kind of human manipulation. It has been gaining popularity throughout Russia since the middle of the 20th century. Still, the breed is not  well-known outside of Russia, Europe, and Japan. So far, it has not been granted official recognition by the Cat Fanciers Association.

International cat breed registries are taking notice, though: Fédération Internationale Féline (FIFe), The International Cat Association (TICA), and the World Cat Foundation (WCF) allow registration. Some clubs separate long and short haired Kurilian Bobtail cats into separate divisions while others allow them to be shown together. 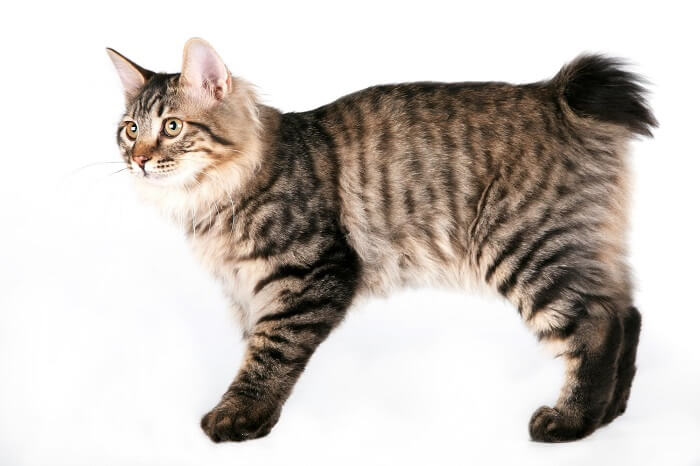 Even though Kurilian Bobtails make outstanding pets, this is one of the rarest cat breeds anywhere. The breed is more popular in Europe than it is in the United States, where only a few catteries specialize in Kurilian Bobtail kittens.

Thanks to its island origins, this breed loves to fish and is excellent at capturing its desired prey. These kitties have water resistant coats. They are not afraid to get wet and will sometimes join their favorite people when it's time for a bath or shower, poking curious paws into the water.

Kurilian Bobtail cats are very slow to mature, not reaching full stature until about five years of age. 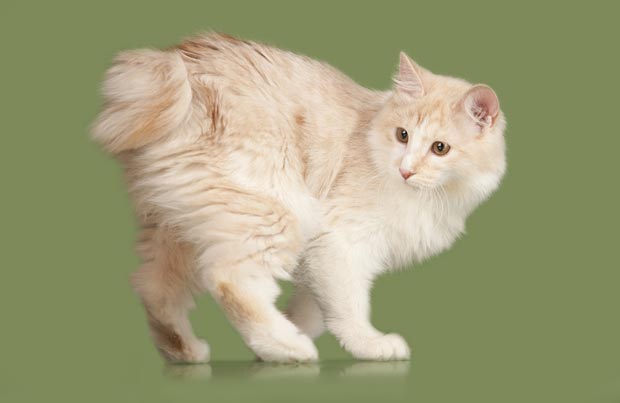 A Kurilian Bobtail cat's eyes are walnut shaped, rounder at the bottom, and more oval on top. They are set at a slight angle, between the base of the year and the tip of the nose. The eyes should be about one eye width apart. All eye colors are acceptable.

The legs should be of medium length, with the hind legs being longer than the front. The feet should be rounded. Long-haired Kurilian Bobtail cats should display tufts of hair between their toes.

The Kurilian Bobtail cat's tail is its most distinguishing feature. It may have one or more kinks and or turns, and may be stiff or flexible. The hair of the tail often disguises its shape and gives it the appearance of a pom-pom.

The body is large, muscular, and well formed, with a generally athletic, well-balanced appearance. The chest should be broad, and the back may be slightly arched.

The head is large, with a modified wedge shape that features rounded contours. It is widest at the cheekbone level.

The Kurilian Bobtail has large, alert ears with elegant furnishings. Tufts may be present at the tips.

All colors and patterns are acceptable. White is permitted and may include blazes, medallions, snowshoes, and any other white markings in any amount.

How much does a Kurilian Bobtail cat cost?

How big do Kurilian Bobtail cats get?

The Average lifespan for Kurilian Bobtail is 14-20 years.

Kurilian Bobtail are long-haired cats, so you do have to expect a certain amount of shedding from this breed, but they don't shed as much as other cat breeds.