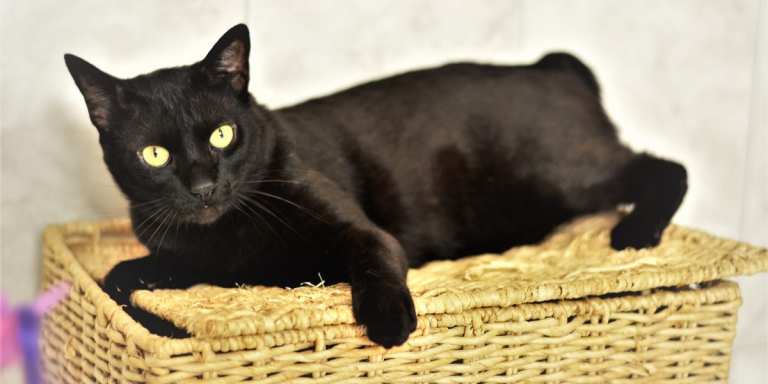 Temperament
? The breed’s dominant personality traits. While each individual has a unique personality, breed-specific genetics affect qualities like sociability, playfulness, and intelligence.
Playful, charming, inteligent, outgoing Playful, charming, inteligent, outgoing
Origin
? Where this breed was first established.
Japan
Other Names
? In addition to their official names, most breeds earn a few nicknames.
Singing Cat,
Group
? Breeds are grouped by their size and coat type.
Medium-sized shorthair and longhair
Height
? The typical adult height among individuals of this breed. Height is measured from the top of the head to the bottom of the front paws.
10"-14"
Body Length
? The typical adult body length among individuals of this breed. A cat’s length is measured from the base of the tail to the tip of the nose.
12"-16"
Weight
? The typical adult weight range of this cat breed.
6-10 pounds
Life Expectancy
? The average lifespan of the breed. While life expectancy is fairly consistent across all cat breeds, some breeds tend to live shorter or longer than others.
12-16 years
Price
? The average price.
$500-$2,000
Affection Level
? Breeds with a high affection level want to give and receive a lot of attention, while less-affectionate breeds are not as interested in petting and snuggles.
0 100%
100%
Activity Level
? Breeds with high activity levels will engage more in active play and demand more space and attention.
0 100%
90%
Pet-Friendly
? How well the breed tends to get along with cats, dogs, and other pets.
0 100%
90%
Kid-Friendly
? Breeds with a higher rating in this area tend to be gentle and patient, while lower-rated breeds may feel uncomfortable with children.
0 100%
100%
Sociability
? Breeds with a higher sociability rating will want to spend time with you all day, while less-sociable breeds seldom seek out human interaction.
0 100%
100%
Intelligence
? Breeds with higher intelligence ratings are more curious, investigative, and easy to train. Less-intelligent breeds are less trainable but often laid-back and easygoing.
0 100%
100%
Playfulness
? Breeds that score higher in this area have strong hunting instincts that make them great playtime companions.
0 100%
90%
Independence
? Breeds that score higher in this area are able to spend hours alone, while less-independent breeds require plenty of attention.
0 100%
40%
Vocality
? A higher rating in this area indicates a breed prone to plenty of meowing and other vocalizations, while less-vocal breeds are happy to stay quiet.
0 100%
60%
Grooming
? Breeds with higher grooming scores require more maintenance like brushing and bathing, while lower-scored breeds are virtually maintenance-free.
0 100%
30%

About the Japanese Bobtail Cat

Playful, intelligent, and with an attitude that’s only a little demanding, the Japanese Bobtail cat is a rare breed with stunning looks, soft silky fur, and a melodious singsong voice.

If you're lucky enough to bring a Japanese Bobtail cat into your home, you'll have a friend for life. These cats are exceptionally loyal and loving, even though they believe that you live to serve them. They love to follow their favorite people around, meowing and tapping for attention, and bringing toys to ask for games of fetch that can seem to go on forever.

Japanese Bobtail cats are renowned for their friendliness. Many are so outgoing that they will even greet strangers like old friends. They love to be involved in everything, reading the same books you do, playing computer games and surfing the Internet together, and helping you with all of your projects, carrying on a conversation the entire time.

The breed's friendly nature doesn't just extend to humans: These cats typically enjoy the company of other felines and they will readily make friends with dogs as well.

Most depictions of the Japanese Bobtail cat show the Mi-Ke color variants, which is pronounced 'mee kay." Mi-Ke is a unique tricolor pattern that is normally displayed by female cats. This is atrait that is shared with calico cats, which also display three colors in their coats.

Even though Mi-Ke (calico) is the best-known Japanese Bobtail cat color, these kitties can be of any shade and pattern including solid colors, van, tabby, and bi-color. Whatever your favorite cat color, it's likely that there's a Japanese Bobtail to match! 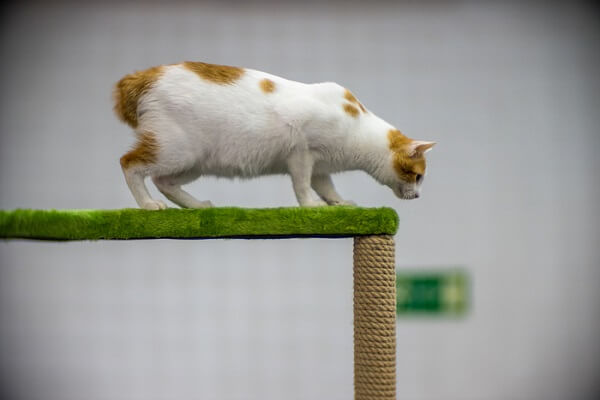 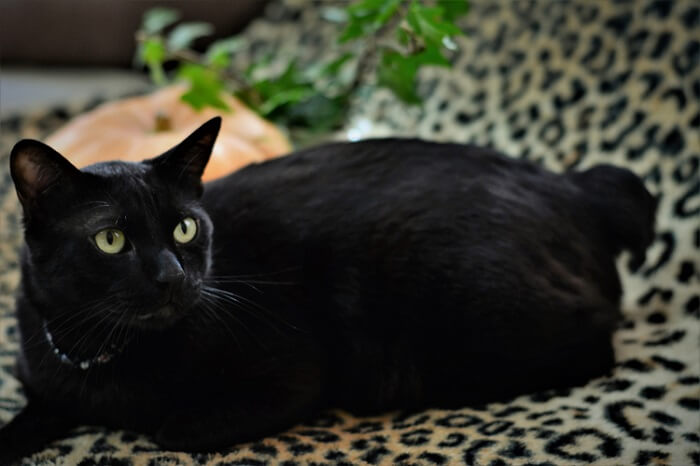 Japanese Bobtail cats do not have any special nutritional needs. We recommend offering a high-protein diet without too many carbohydrates. If you are not feeding your cat fresh food, it's best to offer a high-quality commercial brand that incorporates real meat or fish as the number one ingredient.

The Japanese Bobtail cat benefits from occasional brushing, particularly if it has a medium to long haircoat. Even though these cats are perfectly capable of grooming themselves, your attention is appreciated – plus, you will be helping your cat cut back on shedding while reducing the likelihood of hairballs.

It's a good idea to teach your cat how to accept nail trimming and toothbrushing from a young age. Both grooming

Japanese Bobtail cats are incredibly athletic, and will happily spend hours playing. These cats love to run and jump, and they take very well to walking on leashes. They typically enjoy adventures and excel at feline agility eventing.

Because they are so active, Japanese Bobtails really need approved play structures like cat towers and shelves. Cat trees provide a place to climb and scratching posts will save your furniture from damage.

Japanese Bobtail cats typically enjoy great health, and do not have any known genetic disorders.

If you guessed that Japanese Bobtail cats are native to the islands of Japan, you're correct! The first cats to arrive in Japan probably came from China or Korea, sometime around 600 to 700 A.D., when Buddhist monks needed help keeping rats out of the rice paper scrolls they used for temple records.

As the bobtail gene became more prevalent, more bobtail cats were seen. During the 1600s, rats plagued Japan's silk industry and cats were released from the temples and tasked with the important job of rodent abatement. 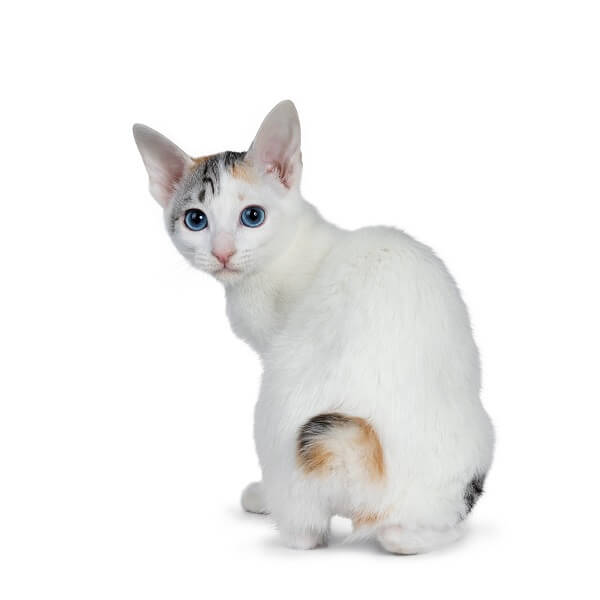 No two Japanese Bobtail cats have the exact same tail structure: In fact, it has been said that each of these cats have a tail as unique as a fingerprint.

While members of the Japanese Bobtail family may not be lap cats, they truly enjoy the company of their favorite people. They like to be close and will often snuggle next to a person on the sofa. It's not uncommon for them to climb under the covers with their favorite companion at bedtime.

If you have ever noticed a statue of a cat with its paw raised up, perhaps with a hinge attached to allow the paw to swing back and forth, you've seen one of the most popular artistic interpretations of the Japanese Bobtail cat ever created. These statues are called Maneki Neko (beckoning cat) and are generally believed to bring good luck. In shops, they are used to attract good customers. 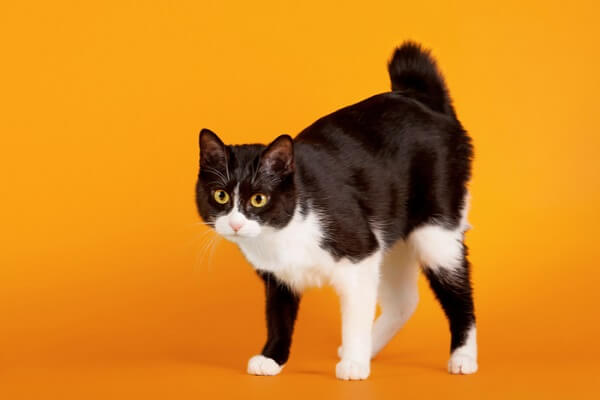 The Japanese Bobtail cat's eyes should be large, wide and alert, with an oval shape. All eye colors are acceptable, and odd-eyed cats are seen as desirable.

The Japanese Bobtail cat's tail is unique, with one or more curves, kinks, or angles present. The tail may be rigid or flexible, and it should be in harmony with the rest of the cat. The tail should have a fluffy appearance, similar to a pom-pom.

The Japanese Bobtail should be of small to medium size, with straight lines, and a clean, well muscled appearance. The torso should be long and lean, and the overall impression should be that of balance. Males are generally larger than females.

The ears should be large and expressive. They should be set upright, wide apart, and at right angles to the head.

The coat may be short or long, always soft and silky, without an undercoat. Longhair Japanese Bobtail cats should display a frontal ruff, breeches, ear tufts, and tufts of hair between the toes.

All colors and patterns are acceptable. Nose leather and paw pad colors should complement the coat color.

How much does a Japanese Bobtail cat cost?

How big do Japanese Bobtail cats get?

The Average lifespan for Japanese Bobtail is 12-16 years.

Japanese Bobtail are long-haired cats, so you do have to expect a certain amount of shedding from this breed, but they don't shed as much as other cat breeds.