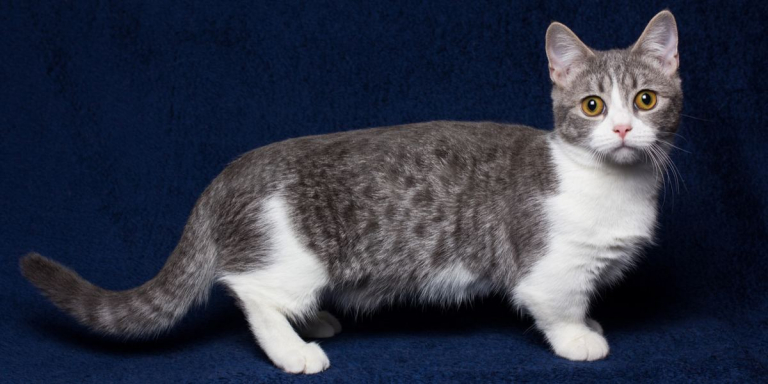 Temperament
? The breed’s dominant personality traits. While each individual has a unique personality, breed-specific genetics affect qualities like sociability, playfulness, and intelligence.
Sweet, friendly, curious, playful
Origin
? Where this breed was first established.
United States
Other Names
? In addition to their official names, most breeds earn a few nicknames.
Kangaroo cat, Magpie, Sausage cat
Group
? Breeds are grouped by their size and coat type.
Small short-haired and long-haired
Height
? The typical adult height among individuals of this breed. Height is measured from the top of the head to the bottom of the front paws.
6"-9"
Body Length
? The typical adult body length among individuals of this breed. A cat’s length is measured from the base of the tail to the tip of the nose.
11"-14"
Weight
? The typical adult weight range of this cat breed.
4-9 pounds
Life Expectancy
? The average lifespan of the breed. While life expectancy is fairly consistent across all cat breeds, some breeds tend to live shorter or longer than others.
12-15 years
Price
? The average price.
$1,000-$2,000
Affection Level
? Breeds with a high affection level want to give and receive a lot of attention, while less-affectionate breeds are not as interested in petting and snuggles.
0 100%
100%
Activity Level
? Breeds with high activity levels will engage more in active play and demand more space and attention.
0 100%
90%
Pet-Friendly
? How well the breed tends to get along with cats, dogs, and other pets.
0 100%
100%
Kid-Friendly
? Breeds with a higher rating in this area tend to be gentle and patient, while lower-rated breeds may feel uncomfortable with children.
0 100%
90%
Sociability
? Breeds with a higher sociability rating will want to spend time with you all day, while less-sociable breeds seldom seek out human interaction.
0 100%
100%
Intelligence
? Breeds with higher intelligence ratings are more curious, investigative, and easy to train. Less-intelligent breeds are less trainable but often laid-back and easygoing.
0 100%
100%
Playfulness
? Breeds that score higher in this area have strong hunting instincts that make them great playtime companions.
0 100%
100%
Independence
? Breeds that score higher in this area are able to spend hours alone, while less-independent breeds require plenty of attention.
0 100%
20%
Vocality
? A higher rating in this area indicates a breed prone to plenty of meowing and other vocalizations, while less-vocal breeds are happy to stay quiet.
0 100%
40%
Grooming
? Breeds with higher grooming scores require more maintenance like brushing and bathing, while lower-scored breeds are virtually maintenance-free.
0 100%
60%

About the Munchkin Cat

The Munchkin cat is so much more than an adorable little pet: These cats are sweet natured, personable, and playful. With extra short legs that contribute to the breed's nickname "Dachshund of the cat world," these kitties tend to be on the small side. They may have short or long hair, and they come in every color imaginable.

Thanks to the bouncy, short strides they take when running, Munchkin cats are often compared to rabbits and ferrets. The truth is, they are 100% feline, with magnetic personalities, a strong play drive, and an intense love of cuddling.

As you might have guessed, this breed is named after the Munchkins from The Wizard of Oz. Their short legs are caused by a naturally occurring genetic mutation that is caused by an autosomal dominant gene. Munchkin cat breeders select for this gene, which affects leg bone length. These kitties don't know that their legs are far shorter than the average cat's; they simply enjoy life a little closer to the ground! To get a better view, they’ll often stand on their hind legs.

Munchkin cats come in three different heights: Standard, supershort, and rug hugger. Leg length affects the height only; the rest of the cat's body is proportioned like that of an average domestic cat.

You might think that Munchkin cats can't jump. While it is true that their leaps are not as impressive as those of average sized cats, many individuals can make it from the floor to the seat of the couch or the top of your bed with ease. Since they aren't likely to leap onto tall tabletops and high display shelves, members of the Munchkin cat breed might be ideal for people who love cats but worry about the impact they might have on collectibles.

One thing is certain: Bring a Munchkin into your home, and you'll instantly fall in love with their adorable looks and charming personalities. 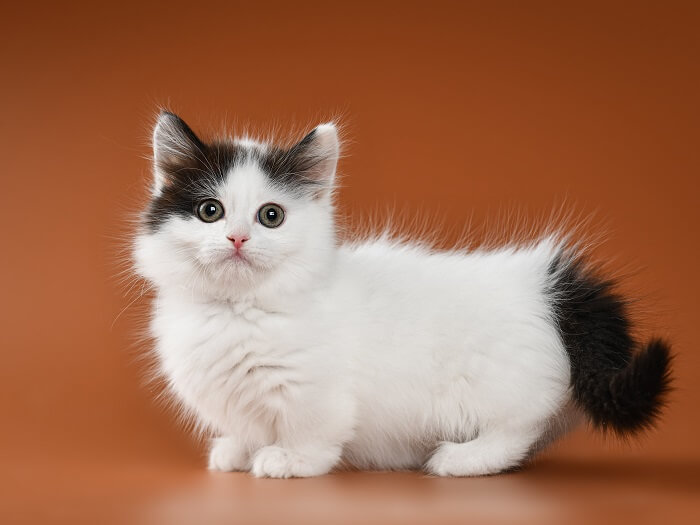 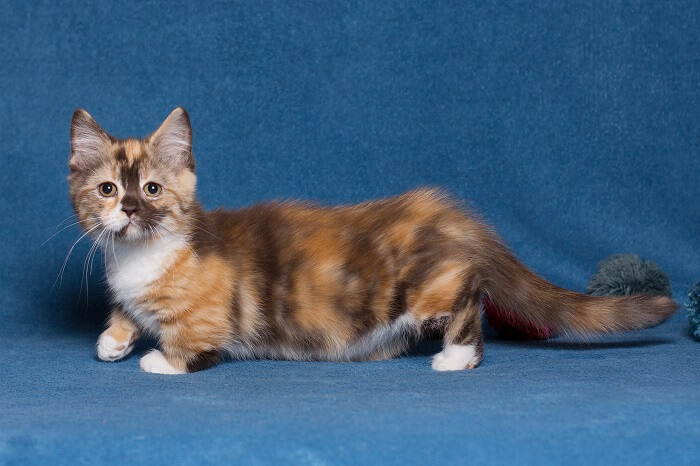 Munchkin cats do not have any special nutritional requirements, however it is best to offer a high-protein diet. If you are not feeding your cat fresh food, be sure to choose a high-quality brand that includes real meat or fish as the first ingredient.

Munchkin cats' grooming routines vary depending on their coat length. If your Munchkin has a short coat, then you'll want to brush them just once or twice per week to remove any loose hair. If you have a long-haired Munchkin cat, daily grooming is essential.

Keep your kitty's claws clipped to prevent damage to your belongings, and consider teaching your kitten to allow toothbrushing from a young age.

Since Munchkin cats love to play, it isn't at all difficult to encourage them to get enough exercise. These kitties absolutely love their toys and they love it even more when their human companions take time out for interactive play. As Munchkin cats get along very well with other pets including well-mannered dogs, they will enjoy playtime together when given the opportunity.

Your Munchkin cat might not need a super tall cat tree, but they need a few scratchers, particularly those that are close to the ground and within easy reach. Sprinkle your kitty's scratcher with catnip to encourage them to sink their claws into appropriate materials only and to bring out even more playfulness.

If your Munchkin shows an interest in climbing, providing them with a cat tree will save your furniture and provide your kitty with an elevated vantage point that they'll appreciate.

It's very important to note that breeding one Munchkin cat to another Munchkin cat can lead to serious health problems in the offspring. If you plan to adopt a Munchkin kitten, be sure that you work with a responsible breeder or adoption agency. Responsible Munchkin breeders outcross cats with the short legged gene with cats that do not carry the gene. This greatly reduces the risk of health issues that could cause discomfort and early death.

While most Munchkin cats are generally healthy, genetic problems do occur - even when breeders are cautious. The most prevalent issue is called lordosis. Lordosis is a dip in the portion of the spinal column located in front of the shoulder blades. When this occurs, it leads to compression of the internal organs. In the mildest cases, lordosis can cause shortness of breath. In serious cases, it can cause the heart, lungs, and other organs to compress over time, leading to severe discomfort and early death.

Munchkin cats are at a higher than average risk for osteoarthritis, which can become severe with age. Some individuals also suffer from a condition called pectus excavatum, which causes a hollow chest.

The Munchkin cat breed is relatively new, although individual cats with shorter than average legs have been noted and even encouraged throughout history.

The breed's story begins in 1983, when a female cat was rescued in Louisiana. She had been abandoned outdoors, and had been chased under a pickup truck by a dog. This cat, later named Blackberry, was pregnant and gave birth to a litter that included some kittens with short legs. Her rescuer, Sandra Hochenedel, gave one of the male short-legged kittens to a friend named Kay LaFrance. This kitten was named Toulouse, and was eventually bred back to Blackberry. Their offspring formed the foundation for the Munchkin cat breed as we know it today.

Responsible breeders do their best to ensure that kittens are healthy and comfortable in their bodies. Instead of pairing registered Munchinks with one another, they outcross Munchkin cats with domestic cats and other purebreds, ensuring a diverse gene pool and reducing the likelihood of genetic diseases.

The International Cat Association (TICA) and the Southern Africa Cat Council are the only registries that currently accept Munchkin cats. Much controversy surrounds the breed, as not all breeders take responsibility for preventing painful issues that adversely affect the welfare of the individuals they produce.

TICA granted the Munchkin cat breed championship status in 2003, but no progress toward advancing the Munchkin's status in the world of cat fancy has occurred since then. 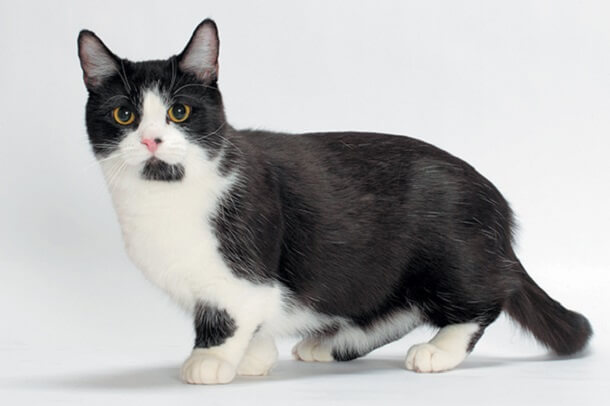 Munchkin cats love to collect small, shiny objects. This trait is so prevalent that the breed has been nicknamed "The magpie of the cat world!"

If you're looking for a pet that's friendly with strangers, you might want to consider a Munchkin cat. These kitties like just about everyone they meet and will happily hop into a newcomer's lap.

The Munchkin cat's short legs lead people who are unfamiliar with the breed to believe that these cats are very slow-moving. In fact, the opposite is true: Munchkin cats are capable of running at high speeds. Since they're so low to the ground, they are able to make tight turns like a low-slung racecar! 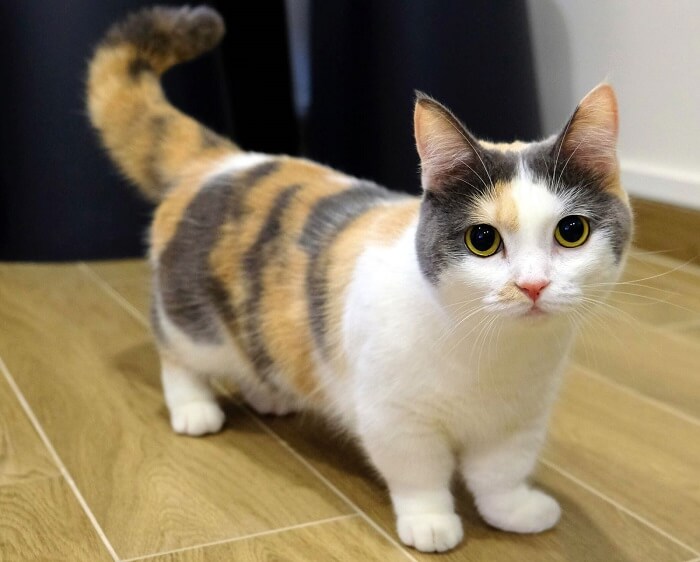 The eyes should be walnut shaped and should be wide enough apart to provide an open, alert expression. Eyes may be of any color.

A Munchkin cat's legs should be short, and should be set evenly apart, with the upper and lower forelegs being of equal length. The back legs may be of the same length as the front legs, although longer back legs and shorter front legs are acceptable. The paws should be round and compact. Feet should be pointed straightforward, not pronated inward or outward.

The tail should be of medium length – about the same length as the cat's body. It should taper and have a rounded end.

The Munchkin cat is a small to medium-sized breed that matures to an average weight of 5 to 9 pounds. Females are usually smaller than males.

The head should be a modified wedge shape with rounded contours, and should be of a size that is proportionate to the cat's body.

A Munchkin cat's ears should be proportionate to the head, with broader bases and slightly rounded tips. Longhair Munchkin cats may display lynx tips.

Munchkin cats may be of any color and pattern imaginable. Solid colors, tabbies, harlequins, and pointed varieties are a few examples.

How much does a Munchkin cat cost?

How big do Munchkin cats get?

Munchkin cats tend to be small in size. A fully grown Munchkin cat might weigh between 4-9 pounds or more and range in height anywhere from about 6"-9" inches tall.

How long do Munchkin cats live?

The Average lifespan for Munchkin is 12-15 years.

Munchkin are long-haired cats, so you do have to expect a certain amount of shedding from this breed, but they don't shed as much as other cat breeds.