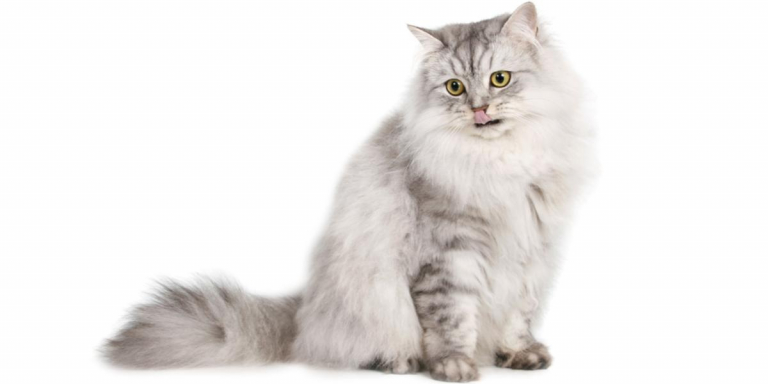 Temperament
? The breed’s dominant personality traits. While each individual has a unique personality, breed-specific genetics affect qualities like sociability, playfulness, and intelligence.
Friendly, sweet, relaxed, affectionate
Origin
? Where this breed was first established.
United States
Other Names
? In addition to their official names, most breeds earn a few nicknames.
Teddy Bear of the cat world, Velcro cat
Group
? Breeds are grouped by their size and coat type.
Large-sized long-haired
Height
? The typical adult height among individuals of this breed. Height is measured from the top of the head to the bottom of the front paws.
9"-11"
Body Length
? The typical adult body length among individuals of this breed. A cat’s length is measured from the base of the tail to the tip of the nose.
12"-18"
Weight
? The typical adult weight range of this cat breed.
10-15 pounds
Life Expectancy
? The average lifespan of the breed. While life expectancy is fairly consistent across all cat breeds, some breeds tend to live shorter or longer than others.
13-16 years
Price
? The average price.
$1200 - $2000
Affection Level
? Breeds with a high affection level want to give and receive a lot of attention, while less-affectionate breeds are not as interested in petting and snuggles.
0 100%
80%
Activity Level
? Breeds with high activity levels will engage more in active play and demand more space and attention.
0 100%
40%
Pet-Friendly
? How well the breed tends to get along with cats, dogs, and other pets.
0 100%
80%
Kid-Friendly
? Breeds with a higher rating in this area tend to be gentle and patient, while lower-rated breeds may feel uncomfortable with children.
0 100%
80%
Sociability
? Breeds with a higher sociability rating will want to spend time with you all day, while less-sociable breeds seldom seek out human interaction.
0 100%
40%
Intelligence
? Breeds with higher intelligence ratings are more curious, investigative, and easy to train. Less-intelligent breeds are less trainable but often laid-back and easygoing.
0 100%
80%
Playfulness
? Breeds that score higher in this area have strong hunting instincts that make them great playtime companions.
0 100%
60%
Independence
? Breeds that score higher in this area are able to spend hours alone, while less-independent breeds require plenty of attention.
0 100%
40%
Vocality
? A higher rating in this area indicates a breed prone to plenty of meowing and other vocalizations, while less-vocal breeds are happy to stay quiet.
0 100%
40%
Grooming
? Breeds with higher grooming scores require more maintenance like brushing and bathing, while lower-scored breeds are virtually maintenance-free.
0 100%
80%

About the Ragamuffin Cat

If you're looking for a big, friendly, long-haired cat, the Ragamuffin might be the perfect breed for your family. These kitties are very much like Ragdoll Cats; in fact, they are directly descended from that breed and share quite a few similar traits.

Ragamuffin cats make fast friends with everyone they meet, so long as they are treated with respect. Unlike many cats that prefer to be left to their own devices, these kitties love to be held and will relax completely when picked up and snuggled. They enjoy easy-going pursuits such as watching your favorite shows and movies, napping alongside you while you work from home, and snuggling up with you at night.

Despite their tendency to spend lots of time relaxing, Ragamuffin cats do have a playful side. They will happily play on their own, batting a favorite ball or a catnip mouse from here to there. They appreciate interactive games and their families love their adorable, delicate demeanor, which comes out even when they are attacking a toy.

Because their thick, luxurious coats are prone to picking up debris and because their personalities are so relaxed, these cats are best suited to indoor life. Even though they might be able to withstand cold temperatures, they simply aren't meant to brave the elements or face hazardous situations. 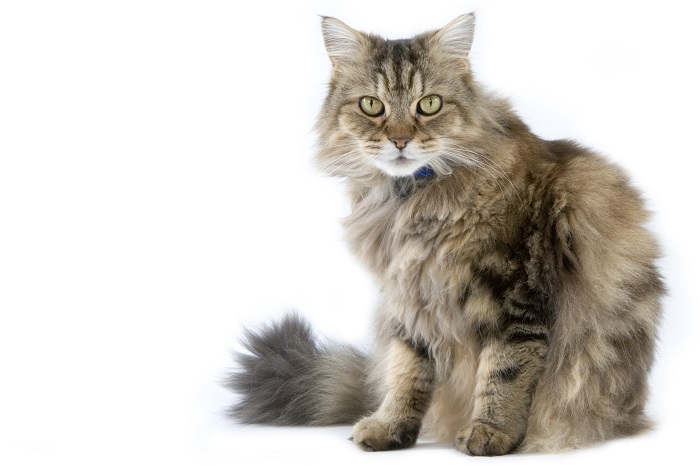 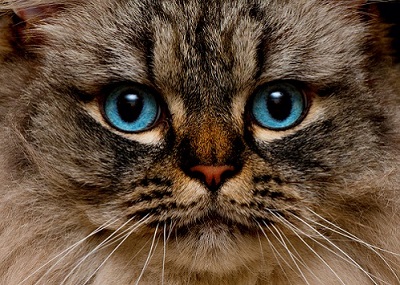 The Ragamuffin cat doesn't have any special nutritional needs, however these cats thrive on a high-protein, low carbohydrate diet that helps prevent obesity. We recommend choosing a high-quality brand with real meat or fish as the main ingredient.

A Ragamuffin cat has a thick, dense undercoat composed of ultrafine hairs that are prone to tangling and matting. These kitties need plenty of attention to keep their coats in top condition. Brush your cat's teeth if you would like to keep them in better health for a lifetime, and consider clipping their toenails as well.

Even though Ragamuffin cats are more accepting of handling than most, it's still important to be gentle as you teach them about these important grooming routines.

Ragamuffin cats love interactive play with their favorite people. They really appreciate it when you take time out for a fun game of laser chase.

Because these cats are so laid-back, these cats don’t view activity as a huge priority. As they get older, you may find that you have to encourage them to play using a feathered wand or tossing a favorite toy.

You might also consider teaching your Ragamuffin cat to walk on a leash. These kitties are highly intelligent and with care, can be taught how to walk along with you. Once they understand what's going on, they tend to enjoy opportunities to safely explore the outdoors alongside you.

Even though Ragamuffins are generally healthy, they are susceptible to two hereditary issues: Polycystic Kidney Disease (PKD) and Hypertrophic Cardiomyopathy. Even some domestic cats are prone to these illnesses; they’re common in many other purebreds, too.

Ragamuffins can be prone to obesity; sadly, it’s a common issue among big, gentle cats like these. It’s up to us as their guardians to encourage playtime and provide a suitable high-protein diet that helps preserve lean muscle mass.

The history of the Ragamuffin cat begins with some of the same foundation members as those used to create the Ragdoll cat. These IRCA Cherubim Cats were developed between 1971 and 1994. Famous IRCA Miracle Ragdolls, Honey Bears, Ragdolls, and Maximilion breeding lines all went into the development of the Ragamuffin cat.

The original IRCA Ragdoll cats and Cherubim cats were registered privately with the International Ragdoll Cat Association founded by a breeder named Ann Baker. Many of the cats used in the foundation of these breeds were descendents of a domestic long-haired cat named Josephine who was of unknown Persian or Angora stock, and who had a reputation for producing kittens that were unusually docile.

By 1994, some IRCA breeders decided to strike out on their own. Because of trademarks on the breed names Ragdoll and Cherubim, these breeders decided to rename progeny from their IRCA Cherubim cats. One of the group's founding members, a breeder named Curt Gehm, suggested the name Ragamuffin, and it stuck.

The group initially allowed a limited number of out crossings to domestic longhair cats and Persians, as well as IRCA Ragdolls. Currently, only cats with at least one Ragamuffin parent and one CFA / ACFA/ GCCF outcross parent qualify as authentic Ragamuffins.

The Cat Fanciers Association accepted the breed in the miscellaneous class in 2003, and promoted them to championship status in 2011. 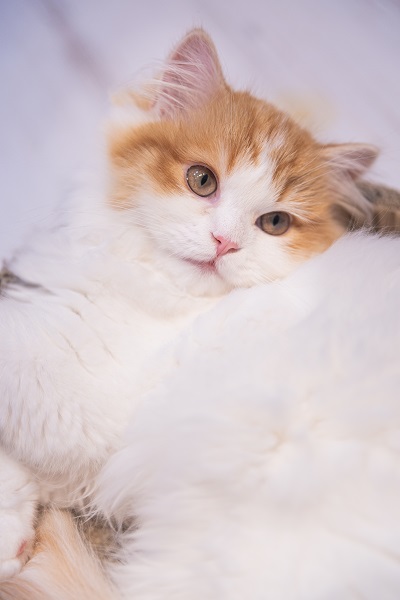 While Ragdoll cats must have pointed coloration, Ragamuffins may be of any color and pattern.

The Ragamuffin is renowned as one of the laziest cat breeds. If you've been searching for an easy-going pet, this might be the perfect cat for your lifestyle.

Ragamuffin cats can get to be quite large. Males sometimes reach up to 20 pounds. 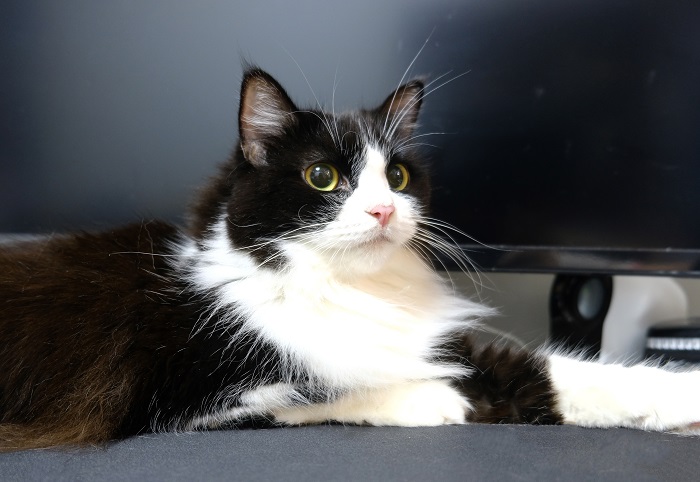 The RagaMuffin should have large, wide-set, walnut-shaped eyes. A slight slant is acceptable. All eye colors are permitted, including odd-eyed. There are some exceptions to the color rule: Mink-colored RagaMuffin cats must have aqua eyes and cats in sepia colors must display eye colors in yellow-gold to green.

The legs should display heavy boning, and should be of medium length, with hind legs being slightly longer than forelegs. The paws should be large and round, with tufts between the toes.

The Ragamuffin cat should have a long, proportionate tail with a full plume. The tail should taper slightly from base to end.

The RagaMuffin should display a somewhat rectangular shape, with a broad chest, broad shoulders, and a fatty pad in the lower abdomen. Although fully fleshed, RagaMuffin cats shold be well-balanced and not obese.

The head should be a broad modified wedge with rounded edges and no flat planes.. The muzzle should appear short and rounded, and the whisker pads should be puffed, presenting a sweet, almost smiling look. The cheeks should be full and a scooped nose break should be visible in profile. The neck should be short and heavy. Males may display prominent jowls.

The coat should be of medium to medium-long length, with a soft, silky, dense texture.

All colors and patterns are acceptable. Pointed RagaMufffin cats and pointed with white colored RagaMuffins may be registered with CFA, but may not be shown. All nose leather and paw pad colors are acceptable.

How much does a Ragamuffin cat cost?

How big do Ragamuffin cats get?

Ragamuffin cats tend to be large in size. A fully grown Ragamuffin cat might weigh between 10-15 pounds or more and range in height anywhere from about 9"-11" inches tall.

How long do Ragamuffin cats live?

The Average lifespan for Ragamuffin is 13-16 years.

Ragamuffin are long-haired cats, so you do have to expect a certain amount of shedding from this breed, but they don't shed as much as other cat breeds.

One thought on “Ragamuffin”