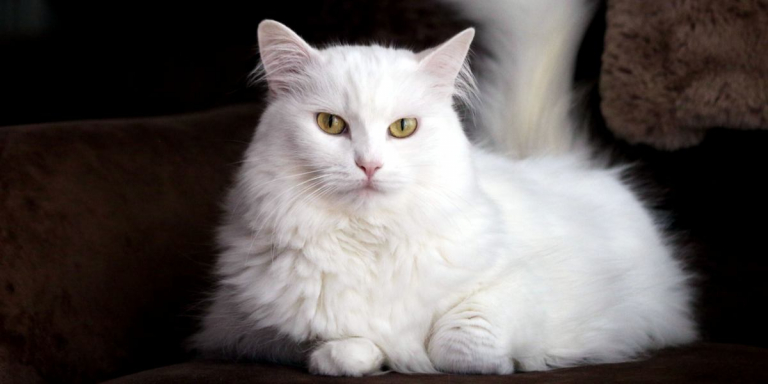 Temperament
? The breed’s dominant personality traits. While each individual has a unique personality, breed-specific genetics affect qualities like sociability, playfulness, and intelligence.
Playful, affectionate, intelligent, friendly
Origin
? Where this breed was first established.
Turkey
Other Names
? In addition to their official names, most breeds earn a few nicknames.
Ankara
Group
? Breeds are grouped by their size and coat type.
Small to medium-sized long-haired
Height
? The typical adult height among individuals of this breed. Height is measured from the top of the head to the bottom of the front paws.
8"- 10"
Body Length
? The typical adult body length among individuals of this breed. A cat’s length is measured from the base of the tail to the tip of the nose.
12"-15"
Weight
? The typical adult weight range of this cat breed.
5-10 pounds
Life Expectancy
? The average lifespan of the breed. While life expectancy is fairly consistent across all cat breeds, some breeds tend to live shorter or longer than others.
15-18 years
Price
? The average price.
$1000 - $2000
Affection Level
? Breeds with a high affection level want to give and receive a lot of attention, while less-affectionate breeds are not as interested in petting and snuggles.
0 100%
80%
Activity Level
? Breeds with high activity levels will engage more in active play and demand more space and attention.
0 100%
80%
Pet-Friendly
? How well the breed tends to get along with cats, dogs, and other pets.
0 100%
60%
Kid-Friendly
? Breeds with a higher rating in this area tend to be gentle and patient, while lower-rated breeds may feel uncomfortable with children.
0 100%
60%
Sociability
? Breeds with a higher sociability rating will want to spend time with you all day, while less-sociable breeds seldom seek out human interaction.
0 100%
80%
Intelligence
? Breeds with higher intelligence ratings are more curious, investigative, and easy to train. Less-intelligent breeds are less trainable but often laid-back and easygoing.
0 100%
80%
Playfulness
? Breeds that score higher in this area have strong hunting instincts that make them great playtime companions.
0 100%
80%
Independence
? Breeds that score higher in this area are able to spend hours alone, while less-independent breeds require plenty of attention.
0 100%
40%
Vocality
? A higher rating in this area indicates a breed prone to plenty of meowing and other vocalizations, while less-vocal breeds are happy to stay quiet.
0 100%
20%
Grooming
? Breeds with higher grooming scores require more maintenance like brushing and bathing, while lower-scored breeds are virtually maintenance-free.
0 100%
60%

About the Turkish Angora Cat

Also known as the Ankara cat, the Turkish Angora has a marvelous personality to match its stunning appearance. Highly intelligent, just a little bit talkative, and beloved for their tendency to develop complete devotion for their favorite person, these kitties like to be in the middle of everything, often watching the action without actually joining in.

Of course Angora cats do have a playful streak, curiously investigating cupboards, drawers, empty boxes, and everything else they can find their way into. They love games of chase, and can even learn to play fetch. The more you praise them and applaud their antics, the happier they'll be and the stronger your bond will become.

Turkish Angora cats are one of a few breeds that enjoy water. These cats have a fondness for faucets, and given the opportunity, will happily accompany their people into the shower or sit on the side of the bathtub, perhaps dipping a paw to create mesmerizing ripples. Some individuals have even been known to swim!

Although the Turkish Angora cat enjoys attention, members of this breed are a bit less demanding than their Siamese and Oriental cousins. So long as these kitties have plenty of toys to keep them entertained throughout the day, they're fine with spending time on their own and will greet you with great enthusiasm when you return from a long day at work. 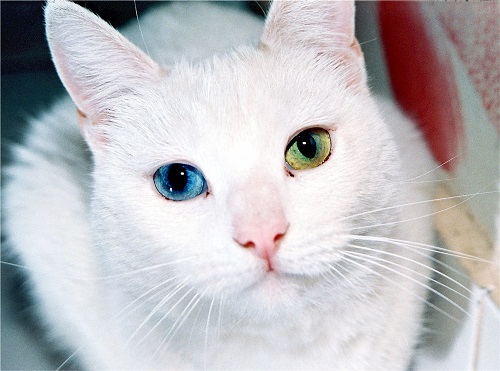 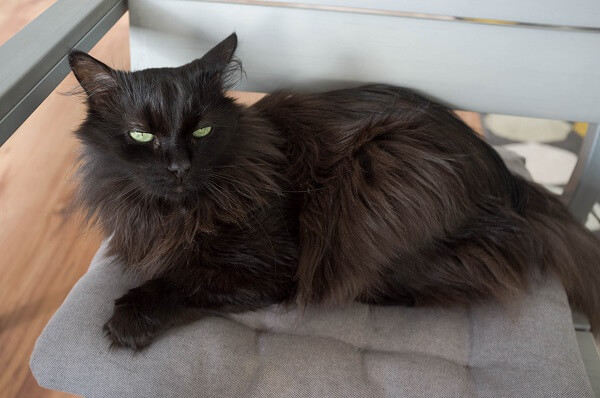 Turkish Angora cats don't have any special nutritional needs, however it's best to offer a high-quality food that incorporates real meat or real fish as the number one ingredient. You may want to look for a brand that incorporates additional Omega fatty acids to support skin and coat health.

Despite having a long coat, the Turkish Angora does a fairly good job of keeping itself groomed. Of course, you're welcome to offer a daily brushing, which your cat will appreciate. Not only is this a great opportunity to bond with your kitty, you'll catch any tangles.

Since Turkish Angora cats have single coats with no heavy undercoat, they are not prone to developing mats.

Turkish Angora cats love to play, particularly when others get involved. These kitties love to chase balls and catnip mice, and they're fond of teaser wands, too. You'll want to treat your kitty to a cat tree that satisfies its instinctual need to climb, and they'll certainly appreciate other cat furniture such as scratching posts and window seats. A well-stocked basket of toys will keep your Turkish Angora entertained.

As a natural cat breed, the Turkish Angora is generally healthy. There are a few rare conditions that can affect Turkish Angoras including ataxia, which is an inherited condition that is autosomal recessive. Affected kittens display tremors and typically do not survive to adulthood.

Some Turkish Angora cats – usually male – develop a heart condition called hypertrophic cardiomyopathy at middle age. In addition, some of these cats – particularly those with white coats and blue eyes or odd eyes are born deaf, or with deafness in the ear on the same side as the blue eye.

The first written record of the Turkish Angora cat as we know the breed today is credited to French naturalist De Buffon. In the late 1700s, he mentioned a breed of cats with long hair that originated in Turkey. Feline geneticists believe that the breed may have evolved from Manul cats, which were first domesticated by the Tartars.

Of course, this is an ancient cat breed with a history that certainly predates the 16th century, and it's entirely possible that the prophet Mohammed had at least one of them. As the story goes, his cat Muezza was sleeping so peacefully in his arms that he decided to cut a sleeve off his tunic instead of interrupting his pet's nap.

Long-haired cats made their way to Britain and France as early as the late 1500s, coming from Russia, Persia, and Turkey. It's likely that some of these were Turkish Angoras.

By the late 1700s, Turkish Angora cats made their way to America. Early cat fanciers and breeders blended Angora cats with other long-haired breeds including Russian Longhairs and Persians. Before long, so much interbreeding had taken place that purebred angora cats became impossible to find outside of Turkey, where the breed is considered to be a national treasure.

In 1917, Turkey's government and the Ankara Zoo decided to develop a breeding program aimed at preserving the Angora cat breed. Angora cats with odd eyes – meaning one blue eye and one amber eye – were a main focus of the breeding program, partly because legend states that they are descendents of Mohammed's Angora cat, Muezza, and as such, are believed to carry the touch of Allah.

In 1962, a U.S. Army colonel named Walter Grant was stationed in Turkey. His wife, Liesa Grant, exported a pair of Turkish Angora cats to the United States. These cats came with pedigrees and interest in the breed grew rapidly. Even though it was difficult to import Angora cats, more breeders joined the effort and these beautiful cats once again proliferated in the West. 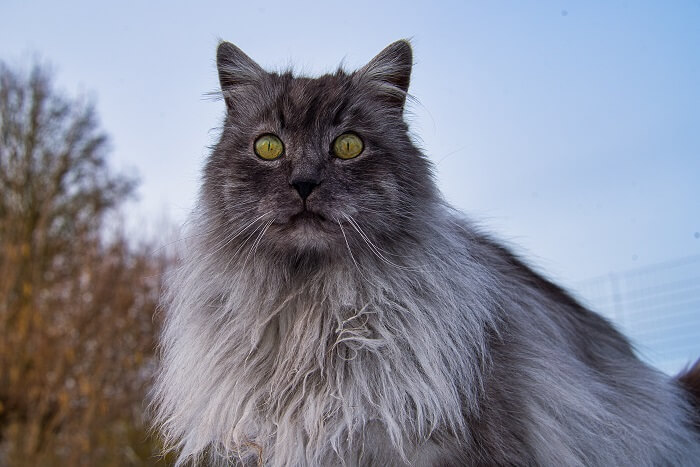 Many Turkish Angoras are white, but the Turkish Angora cat is believed to be the first breed to originate long hair and cats, as well as the color white in a cat's coat.

Even though we often think of the Turkish Angora as a pure white cat, these kitties occur in all different colors and patterns and many of these are accepted for CFA registration.

Turkish Angora cats get along very well with other pets, however they have a dominant streak. 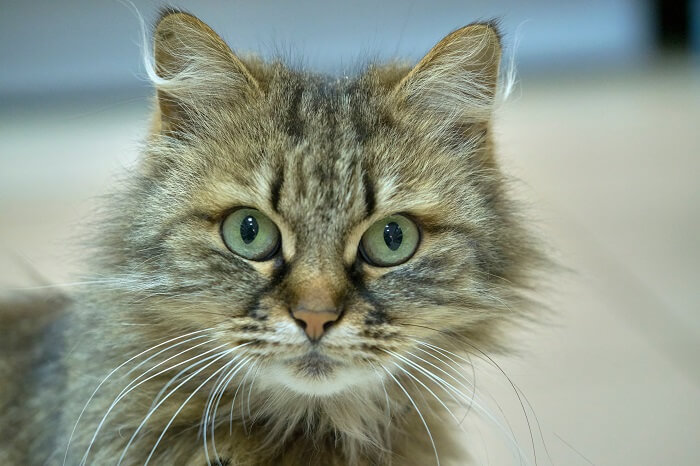 The eyes should be large and almond shaped, with a slight upward slant. All eye colors are acceptable including odd eyes. Deeper, richer colors are desirable.

The legs should be long and graceful, with the hind legs being slightly longer than the forelegs. The paws should be small, round, and elegant, with preference given to cats that exhibit tufts between their toes.

The Turkish Angora cat should have a long, tapered tail with a full brush.

The Turkish Angora should have a graceful, balanced appearance. The torso should be long, fine-boned, and muscular. Females are often smaller than males.

The head should be small to medium sized, in good proportion to the body, with a medium-long, smooth wedge shape. The muzzle should continue the wedge shape, neither pinching in at the whiskers nor forming prominent whisker pads. The nose should be of medium length, the chin should be gently rounded, and the neck should be slim, graceful, and long. Males may exhibit more prominent jowls than females.

The Turkish Angora should have large ears with wide bases, prominent tufts, and pointed tips. The ears should be erect, and should be set high on the head.

The Turkish Angora cat has a single coat with longer hair at the tail and ruff. The hind legs should exhibit longer hair that forms britches.

All colors and patterns are acceptable. Lockets and buttons are permitted. Nose leather and paw pad color should complement the cat’s coat color.

How much does a Turkish Angora cat cost?

How big do Turkish Angora cats get?

The Average lifespan for Turkish Angora is 15-18 years.

Turkish Angora are long-haired cats, so you do have to expect a certain amount of shedding from this breed, but they don't shed as much as other cat breeds.