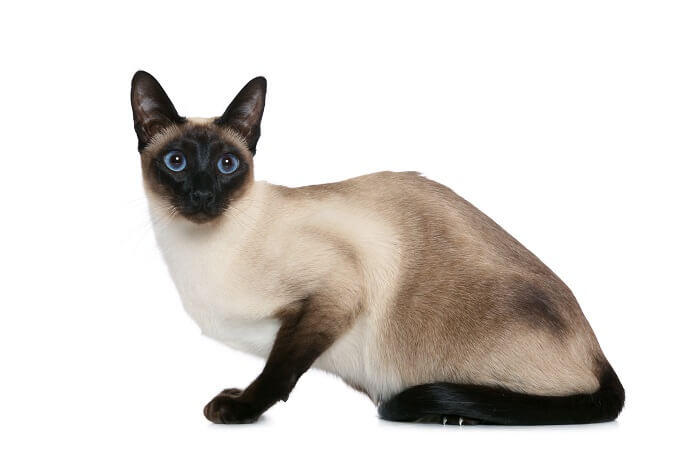 Temperament
? The breed’s dominant personality traits. While each individual has a unique personality, breed-specific genetics affect qualities like sociability, playfulness, and intelligence.
Extroverted, vocal, affectionate, inquisitive
Origin
? Where this breed was first established.
Thailand
Other Names
? In addition to their official names, most breeds earn a few nicknames.
Old-Style Siamese, Wichien Maat, Applehead, Traditional Siamese, Classic Siamese
Group
? Breeds are grouped by their size and coat type.
Large long-haired
Height
? The typical adult height among individuals of this breed. Height is measured from the top of the head to the bottom of the front paws.
21"- 23"
Body Length
? The typical adult body length among individuals of this breed. A cat’s length is measured from the base of the tail to the tip of the nose.
12"-18"
Weight
? The typical adult weight range of this cat breed.
10-16 pounds
Life Expectancy
? The average lifespan of the breed. While life expectancy is fairly consistent across all cat breeds, some breeds tend to live shorter or longer than others.
12-16 years
Price
? The average price.
$600 - $1200
Affection Level
? Breeds with a high affection level want to give and receive a lot of attention, while less-affectionate breeds are not as interested in petting and snuggles.
0 100%
80%
Activity Level
? Breeds with high activity levels will engage more in active play and demand more space and attention.
0 100%
100%
Pet-Friendly
? How well the breed tends to get along with cats, dogs, and other pets.
0 100%
60%
Kid-Friendly
? Breeds with a higher rating in this area tend to be gentle and patient, while lower-rated breeds may feel uncomfortable with children.
0 100%
80%
Sociability
? Breeds with a higher sociability rating will want to spend time with you all day, while less-sociable breeds seldom seek out human interaction.
0 100%
60%
Intelligence
? Breeds with higher intelligence ratings are more curious, investigative, and easy to train. Less-intelligent breeds are less trainable but often laid-back and easygoing.
0 100%
100%
Playfulness
? Breeds that score higher in this area have strong hunting instincts that make them great playtime companions.
0 100%
100%
Independence
? Breeds that score higher in this area are able to spend hours alone, while less-independent breeds require plenty of attention.
0 100%
60%
Vocality
? A higher rating in this area indicates a breed prone to plenty of meowing and other vocalizations, while less-vocal breeds are happy to stay quiet.
0 100%
20%
Grooming
? Breeds with higher grooming scores require more maintenance like brushing and bathing, while lower-scored breeds are virtually maintenance-free.
0 100%
60%

Thai Old-Style Siamese cats – sometimes simply referred to as Thai cats – are charming companions with beautiful features and playful, inquisitive personalities. Just like their western Siamese cousins, these kitties love everyone, including kids, other cats, and cat-friendly dogs. In fact, they’re so affectionate and social, they hate to spend time on their own.

Intelligent and curious, Thai cats are capable of learning tricks, particularly when rewards are on offer. Whether you’d like your cat to come when you call their name or use another signal, or if you’d like to enjoy rousing games of fetch, the Thai cat will be glad to oblige.

If you bring a Thai cat into your family, you’ll want to do everything you can to prevent boredom. These kitties need companionship and acceptable activities, or they’ll find their own fun, reaching into cupboards, opening drawers and investigating their contents, and perhaps learning how to open doors and turn on faucets. Thanks to their determined personalities, there’s little a Thai cat can’t learn! Channel their behavior into puzzle toys and give them another cat for a friend, and you’ll find that life is a bit less colorful.

Despite bouts of mischievous behavior that’s sure to put a smile on your face even when your cat is splashing in your bath or trying to help you clean up after dinner, Thai Old Style Siamese are capable of deep relaxation. When you settle in for a movie or snuggle into bed at night, they like to cuddle close, purring the entire time.

Talkative and truly endearing, with big personalities that are difficult to resist, Thai cats make astonishing pets for families with time and attention to share. 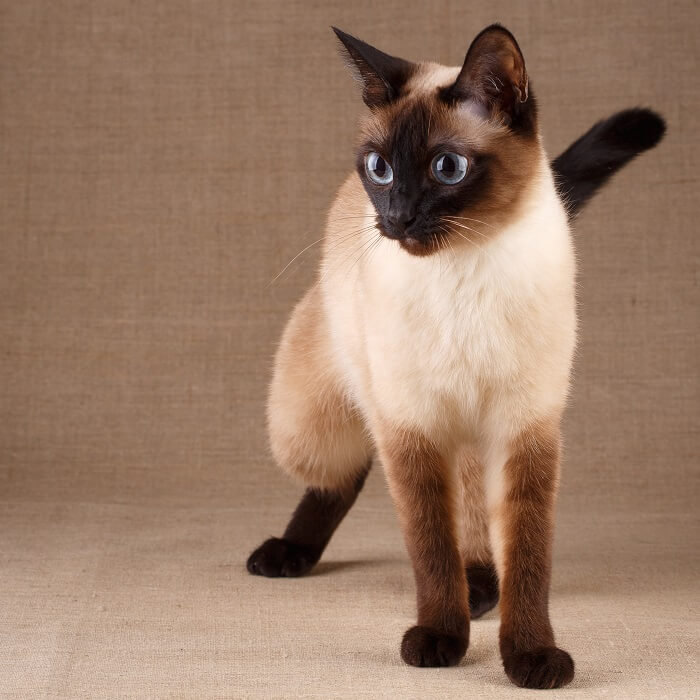 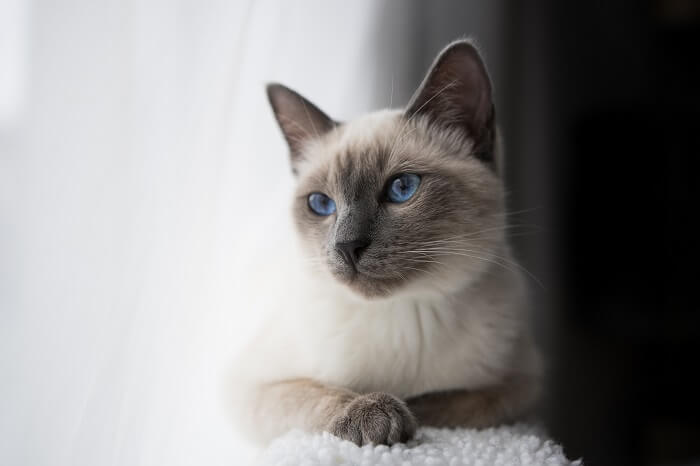 Thai Old Style Siamese cats have no special nutritional needs; however, these cats thrive on high-protein, low-carbohydrate diets. We recommend choosing a brand that incorporates real meat or fish as the main ingredient, as excess carbohydrates can contribute to obesity, particularly later in life. Be sure to feed your cat appropriately for its age.

Give your cat a quick once-over with a soft brush or offer a brisk rub with your fingertips a few times per week to remove dead hair that might otherwise end up on your clothing and furniture. You can bring out the shine in your cat’s coat by following up with a quick polish, using a soft silk scarf or a chamois.

Since Thai cats are prone to periodontal disease, consider teaching them how to have their teeth brushed using feline toothpaste in cat-approved flavors.

Thai cats are extremely energetic, and without regular nail trimming, their families find them swinging from the drapes, clinging to the couch, and shredding various items that have attracted their attention. It isn’t difficult to clip a cat’s toenails but this is a routine that’s best begun from a young age.

You won’t have to encourage your Thai cat to play! These kitties love to zoom up and down their cat trees, and they truly enjoy stretching on a scratching post. Jumping up into windows and hiding in wait for another cat to pass – and then leaping out in a surprise attack – are two more pastimes they enjoy. With lots of interaction and plenty of toys, you can satisfy your cat’s need to expend energy and be entertained by their antics in the process.

Thai Old Style Siamese cats can easily learn how to walk on leashes; if you’d like to help your feline friend enjoy the outdoors safely, walks are another way to stay active while having fun.

Thai cats are generally robust and healthy, however they can occasionally suffer from heart disease, gangliosidosis, hyperesthesia syndrome, psychogenic alopecia, and respiratory infections.

Old-Style Siamese cats are less tolerant of anesthesia drugs than are most other breeds, a trait that’s shared with Western Siamese.

Some individuals are born with crossed eyes, which doesn’t normally cause problems other than issues with peripheral vision. Progressive retinal atrophy (PRA) can affect vision particularly as cats age.

Thai Old Style Siamese cats are bred with the intention of maintaining the characteristics of Thailand’s indigenous pointed cats, also known as the “Wichien-maat” or moon diamond cats of ancient Siam.

A pair of Thai cats – also known as Royal Cats from Siam – were presented to England’s royal family in 1886. Over time, more Siamese were imported and the breed gained popularity not just in England, but across the pond, in America.

The distinction between the Old Style Siamese and the modern Siamese began during the 1950s, when some breeders were selecting for old-fashioned characteristics and others were aiming for the longer, thinner, more angular features seen in contemporary show Siamese.

Preservation of the Old Style Siamese cat began in earnest during the 1980s, as breed clubs were formed in Europe and the United States. In 2001, some breeders increased their efforts, importing indigenous pointed cats directly from Thailand. The imported cats help achieve two goals: First, they widen and improve the Thai breed pool. Second, they help preserve Southeast Asia’s native cat breed, separating indigenous eastern cats from their western counterparts.

PREOSSIA set the new breed application process in motion with The International Cat Association (TICA). In 2007, TICA decided against granting Old Style Siamese separate breed status, and breeders decided to use the name “Thai” rather than Old Style Siamese. In 2010, the Thai cat was granted championship status by TICA.

Today, you can easily tell the difference between a Thai Old-Style Siamese and a modern Western Siamese; these old-fashioned cats are larger, rounder, and generally more robust in appearance than their contemporary cousins. 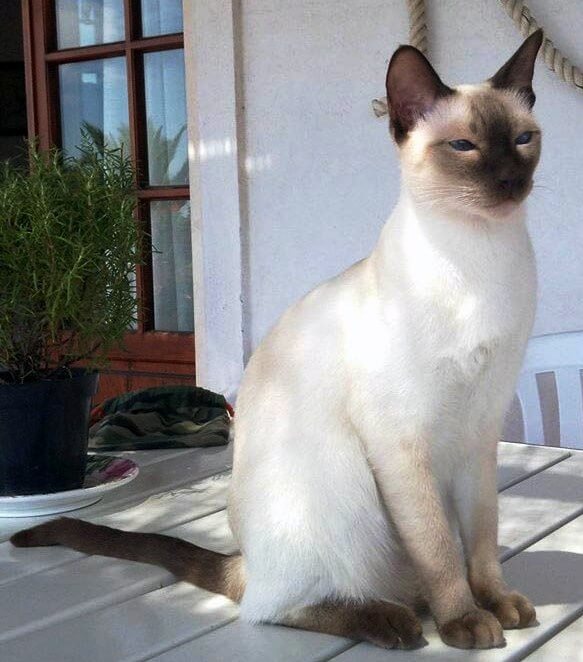 Thai Old-Style Siamese cats are just as friendly and talkative as their modern counterparts.

Thai cats and western Siamese cats share common ancestry, but come from breeding lines that split after the second world war. Despite many shared similarities, they are two distinctly different Siamese cat breeds.

Thai Old Style Siamese are among the world’s oldest domesticated cat breeds. They may have inhabited the kingdom of Siam before the 1300s, when the ancient manuscripts that make up The Cat-Book Poems (Tamra Maew) first described pointed cats like these. 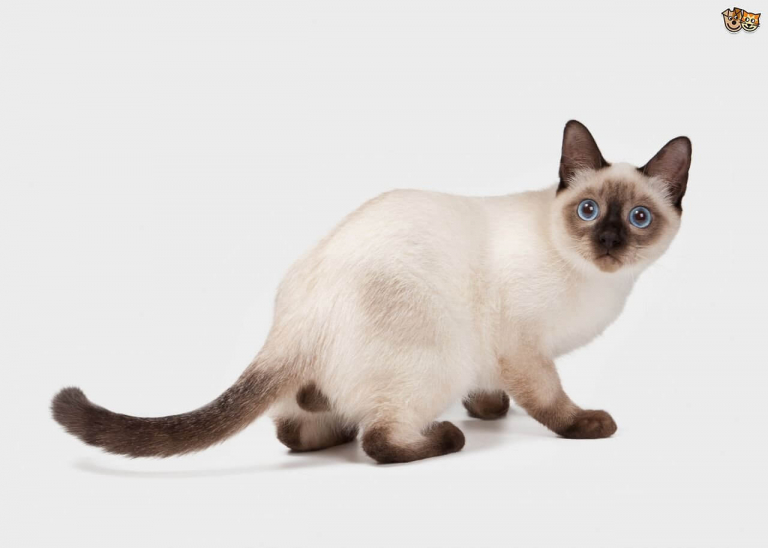 The tail should be long and gently tapered, but not whippy. It should be the same length as the cat’s torso.

The body should be graceful and lithe, but not tubular or too compact. Overall, the cat should be medium to large, with no extremes. The Old Style Siamese should not resemble a native Western cat breed, nor should it have the appearance of a contemporary or modern Siamese.

The Thai Old Style Siamese cat’s head is a modified wedge of medium width, longer than it is wide, but neither narrow nor extreme. The muzzle should be wedge-shaped, and the upper portion of the head should be laterally rounded. The nose should be nearly straight, with a gentle, convex curve above the eyes and a gradual concave curve beneath the eyes when viewed in profile. The neck should be of medium length, and not too narrow.

The Thai cat’s ears should be medium to large, with wide bases and oval tips, set closer to the top of the head than to the head’s sides. The inner base of the ear should be set above the center of the corresponding eye. Light furnishings are permitted.

The coat should be short to very short in length, with a silky texture and little to no undercoat. The coat should lie very close to the body, but does not have to be “painted on.”

Thai Old Style Siamese cats should have pale off-white bodies. The points should be dense and even, with the mask, ears, feet, and tail matching. Seal, blue, lilac, and chocolate colors are common and some standards accept red, flame, and lynx point colors as well.

How much does a Thai / Old Style Siamese cat cost?

How big do Thai / Old Style Siamese cats get?

The Average lifespan for Thai / Old Style Siamese is 12-16 years.

Thai / Old Style Siamese are long-haired cats, so you do have to expect a certain amount of shedding from this breed, but they don't shed as much as other cat breeds.