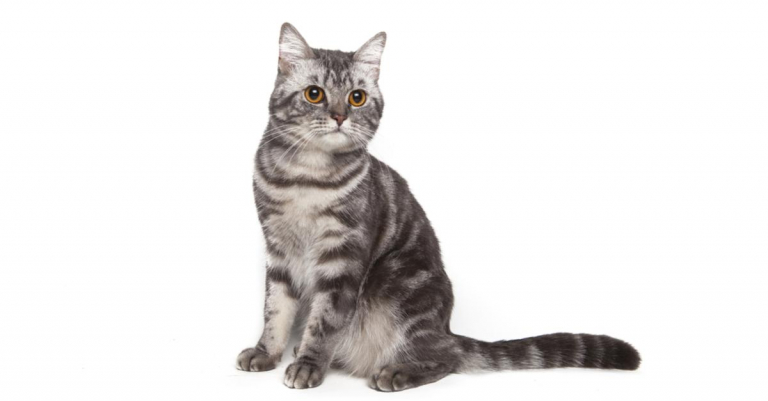 Temperament
? The breed’s dominant personality traits. While each individual has a unique personality, breed-specific genetics affect qualities like sociability, playfulness, and intelligence.
Active, inquisitive, playful, personable
Origin
? Where this breed was first established.
United States
Other Names
? In addition to their official names, most breeds earn a few nicknames.
ASH
Group
? Breeds are grouped by their size and coat type.
Medium-to-large sized shorthair
Height
? The typical adult height among individuals of this breed. Height is measured from the top of the head to the bottom of the front paws.
10"-14"
Body Length
? The typical adult body length among individuals of this breed. A cat’s length is measured from the base of the tail to the tip of the nose.
12"-17"
Weight
? The typical adult weight range of this cat breed.
8-15 pounds
Life Expectancy
? The average lifespan of the breed. While life expectancy is fairly consistent across all cat breeds, some breeds tend to live shorter or longer than others.
12 -17 years
Price
? The average price.
$100 - $1,000
Affection Level
? Breeds with a high affection level want to give and receive a lot of attention, while less-affectionate breeds are not as interested in petting and snuggles.
0 100%
80%
Activity Level
? Breeds with high activity levels will engage more in active play and demand more space and attention.
0 100%
60%
Pet-Friendly
? How well the breed tends to get along with cats, dogs, and other pets.
0 100%
70%
Kid-Friendly
? Breeds with a higher rating in this area tend to be gentle and patient, while lower-rated breeds may feel uncomfortable with children.
0 100%
80%
Sociability
? Breeds with a higher sociability rating will want to spend time with you all day, while less-sociable breeds seldom seek out human interaction.
0 100%
90%
Intelligence
? Breeds with higher intelligence ratings are more curious, investigative, and easy to train. Less-intelligent breeds are less trainable but often laid-back and easygoing.
0 100%
80%
Playfulness
? Breeds that score higher in this area have strong hunting instincts that make them great playtime companions.
0 100%
60%
Independence
? Breeds that score higher in this area are able to spend hours alone, while less-independent breeds require plenty of attention.
0 100%
50%
Vocality
? A higher rating in this area indicates a breed prone to plenty of meowing and other vocalizations, while less-vocal breeds are happy to stay quiet.
0 100%
40%
Grooming
? Breeds with higher grooming scores require more maintenance like brushing and bathing, while lower-scored breeds are virtually maintenance-free.
0 100%
40%

About the American Shorthair Cat 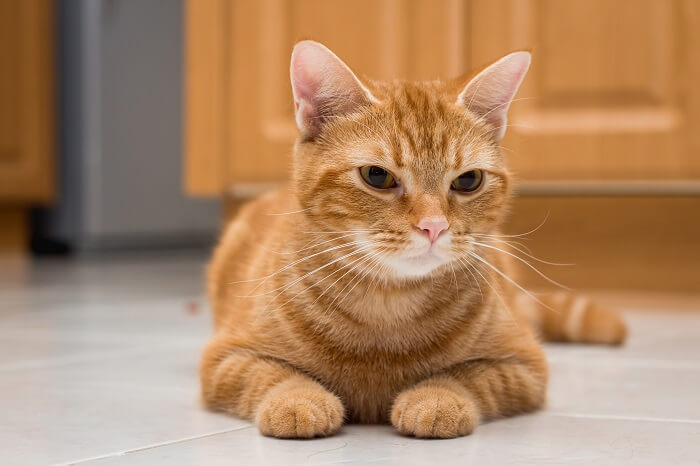 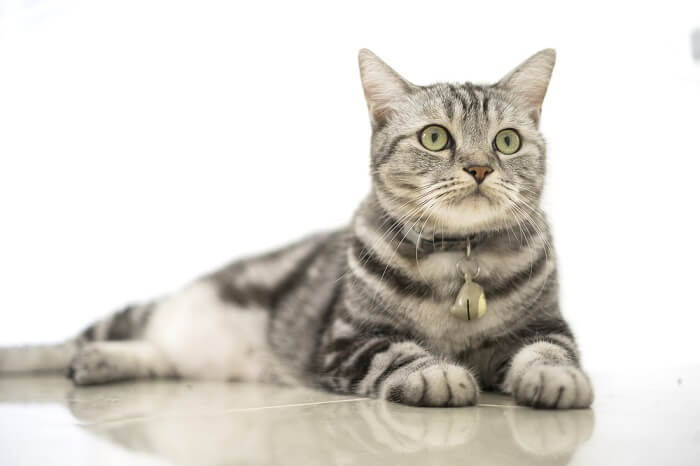 American Shorthair cats offer low maintenance in the grooming department. While you can get away with never brushing this cat, we recommend using a fine, or a soft brush to remove loose hair from your pet's coat at least once per week. This helps keep your furniture cleaner, plus it reduces the likelihood of hairballs.

These cats come from a long line of hunters and they appreciate interactive toys and laser beams. Like other cats, the American Shorthair loves to climb. A cat tree will save your drapes from damage while giving your pet the perfect vantage point – not to mention a cozy spot to nap when the time comes!

While American Shorthair cats generally enjoy good health, they are prone to a few issues, with obesity being the most common.

There are two other known health problems that occur in American Shorthairs: Hereditary hip dysplasia affects some members of the breed, and a form of cardiac disease called hypertrophic cardiomyopathy causes some American Shorthairs to have enlarged hearts. These problems affect only a small percentage of cats, yet they are worth mentioning.

When European colonizers first came to America, they arrived in ships – and they brought cats with them! These hardy mousers were the predecessors to the breed we know and love today as the American Shorthair cat.

As time passed, other cat breeds made their way to America, and of the American Shorthair gained recognition as a distinct breed with different characteristics that set it apart from the rest.

The original bloodline was strengthened by an infusion of British Shorthair DNA. Still, American Shorthair cats have rounder, softer body shapes then their cousins from across the pond. You probably won't be surprised to learn that American Shorthairs starred in the first cat show ever held in the United States, in 1895.

Cat fanciers recorded the first-ever breeding between two American Shorthair cats in 1904. Since then, this breed has remained one of the most popular in the United States. 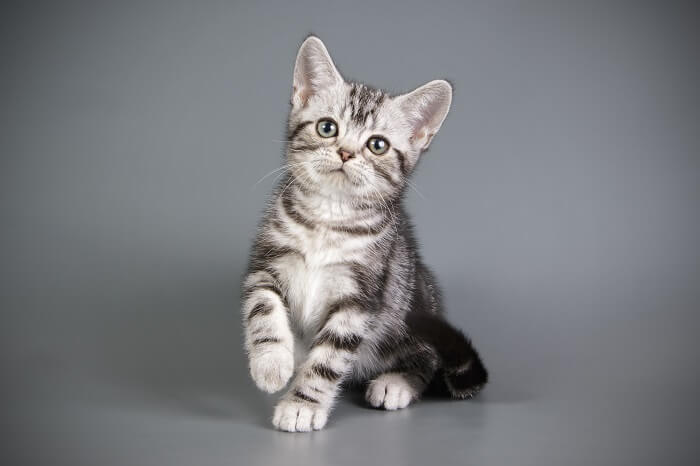 Even though the breed is distinctly American, these cats are popular in other parts of the world. The American Shorthair has been recognized by TICA – The International Cat Association. 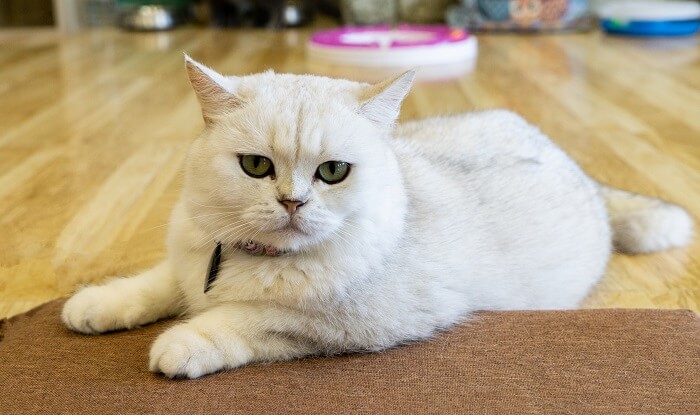 The American Shorthair has large, rounded eyes with half-almond shaped upper lids and distinctly rounded lower lids. There should be at least one eye width between the eyes, and the upper corners should be set slightly higher than the lower corners. American Shorthair eye colors vary between gold and green. Blue eyes are also acceptable, as are two different colored eyes.

The American Shorthair cat has strong, stocky legs that may appear somewhat short and less elegant than the legs of many other cats breeds. This breed's paws are strong, round, and somewhat wide. Paw pad color typically corresponds to nose leather color, with many different variations depending on the cat's color and pattern.

American Shorthair cats have long, proportional tails that are a little wider at the base with a slight taper toward the end. The tail is often carried level or at a slightly upward angle to the body.

The American Shorthair exudes power, confidence, and grace. Their bodies are muscular and compact, with a rounded shape that's as cuddly as it is attractive.

It's easy to distinguish an American Shorthair from a domestic shorthair by looking at the head shape. These cats have distinctly rounded heads with prominent cheeks and fleshy whisker pads. Many American Shorthairs have prominent jowls; this feature is particularly noticeable in intact males.

An American Shorthair cat has medium-sized ears with rounded tips, set wide apart on the head and not overly large at the base.

This breed has a short but lustrous coat with ample body and an even texture. The coat should appear soft and healthy.

How much does a American Shorthair cat cost?

How big do American Shorthair cats get?

The Average lifespan for American Shorthair is 12 -17 years.

American Shorthair are short-haired cats. Therefore, they do not shed as much as long-haired cat breeds.