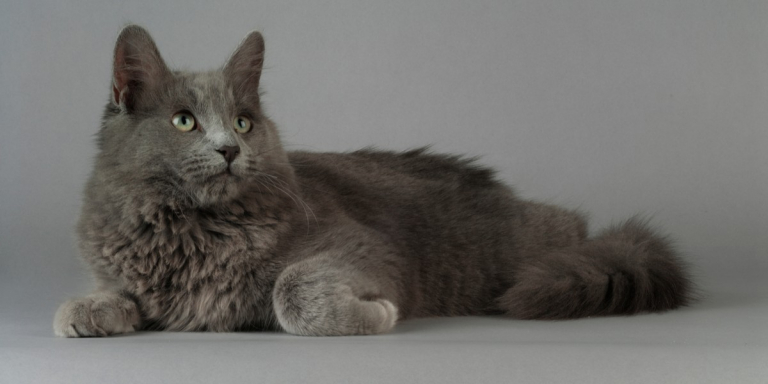 Temperament
? The breed’s dominant personality traits. While each individual has a unique personality, breed-specific genetics affect qualities like sociability, playfulness, and intelligence.
Intelligent, affectionate, loyal, quiet
Origin
? Where this breed was first established.
United States
Other Names
? In addition to their official names, most breeds earn a few nicknames.
Long-haired Russian Blue
Group
? Breeds are grouped by their size and coat type.
Small to medium-sized long-haired
Height
? The typical adult height among individuals of this breed. Height is measured from the top of the head to the bottom of the front paws.
9"- 13"
Body Length
? The typical adult body length among individuals of this breed. A cat’s length is measured from the base of the tail to the tip of the nose.
14"-16"
Weight
? The typical adult weight range of this cat breed.
7-15 pounds
Life Expectancy
? The average lifespan of the breed. While life expectancy is fairly consistent across all cat breeds, some breeds tend to live shorter or longer than others.
11-18 years
Price
? The average price.
$600-$1,200
Affection Level
? Breeds with a high affection level want to give and receive a lot of attention, while less-affectionate breeds are not as interested in petting and snuggles.
0 100%
80%
Activity Level
? Breeds with high activity levels will engage more in active play and demand more space and attention.
0 100%
80%
Pet-Friendly
? How well the breed tends to get along with cats, dogs, and other pets.
0 100%
80%
Kid-Friendly
? Breeds with a higher rating in this area tend to be gentle and patient, while lower-rated breeds may feel uncomfortable with children.
0 100%
60%
Sociability
? Breeds with a higher sociability rating will want to spend time with you all day, while less-sociable breeds seldom seek out human interaction.
0 100%
80%
Intelligence
? Breeds with higher intelligence ratings are more curious, investigative, and easy to train. Less-intelligent breeds are less trainable but often laid-back and easygoing.
0 100%
80%
Playfulness
? Breeds that score higher in this area have strong hunting instincts that make them great playtime companions.
0 100%
80%
Independence
? Breeds that score higher in this area are able to spend hours alone, while less-independent breeds require plenty of attention.
0 100%
40%
Vocality
? A higher rating in this area indicates a breed prone to plenty of meowing and other vocalizations, while less-vocal breeds are happy to stay quiet.
0 100%
40%
Grooming
? Breeds with higher grooming scores require more maintenance like brushing and bathing, while lower-scored breeds are virtually maintenance-free.
0 100%
60%

About the Nebelung Cat

Also known as the long-haired Russian blue, the Nebelung cat is a relatively new breed as well as one of the rarest cat breeds in existence.

If you are lucky enough to bring a Nebelung cat into your home, you can expect a friendly, laid-back companion with stunning good looks to match an outstanding personality. This cat's silvery topcoat and pure blue undercoat lend a magical appearance that's much admired. This kitty is silky soft and while it is technically a long-haired breed, the coat is actually a medium length; longer than that of a shorthair cat but not near so long as that of a cat with very long hair, i.e. a Persian.

Nebelung cats are wonderfully affectionate, with lots of love to share with their families. They're fond of curling up for long naps and TV watching sessions, and given the chance, they'll cuddle up with her favorite people at bedtime.

The Nebelung cat is as playful as it is gentle. This breed is highly intelligent, and is easily taught how to play fun games like fetch. These kitties can learn how to walk on leashes, which allows for safe exploration of the outdoor world and provides some much-needed exercise.

While some breeds need constant attention from their people, the Nebelung cat is all right with a bit of alone time. This doesn't mean you can leave your cat unattended for days on end, but it does mean that your kitty will be okay entertaining itself while you're away at work. Of course, these cats get along well with kids and other pets, and they appreciate the opportunity to socialize whenever it arises, so long as socialization takes place within their family group.

Speaking of socialization, it's very important to introduce the Nebelung cat to a variety of situations, sounds, and people from a very young age. These kitties are prone to nervousness and require a bit more socialization than the average cat. 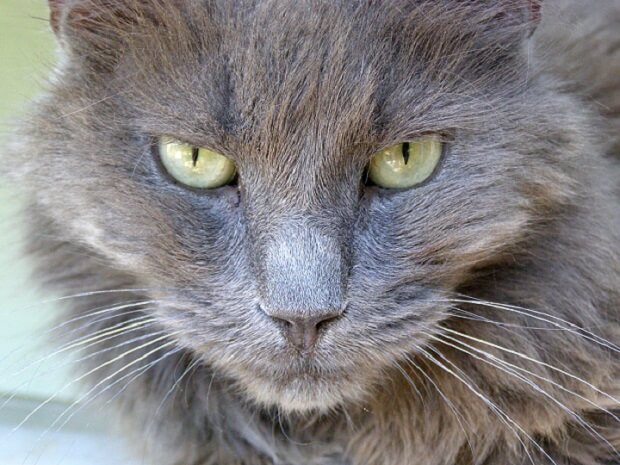 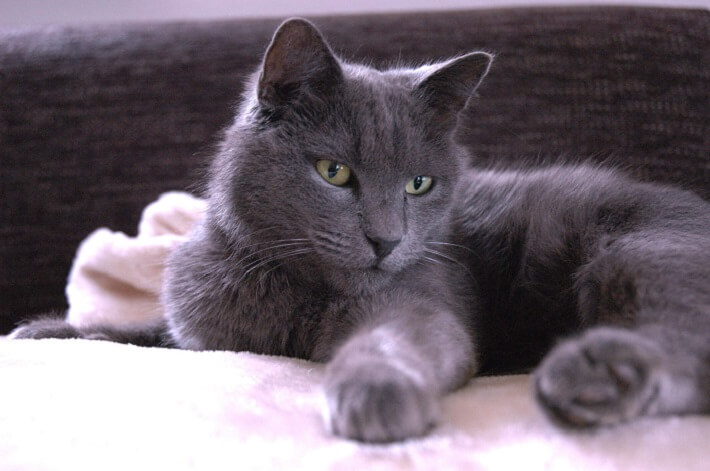 The Nebelung cat has the same nutritional needs as most other breeds, meaning a high quality, high-protein diet is essential for good health. You may want to choose a food with added Omega fatty acids to support skin and coat health and keep this beautiful kitty looking its best.

Since the Nebelung cat has a thick double coat, regular grooming is essential. This cat requires daily brushing to prevent mats from forming. Frequent grooming reduces shedding, which in turn keeps your furniture cleaner and reduces the frequency of hairballs.

Even though the Nebelung is a gentle cat breed in general, these kitties still have an instinctual need to jump and climb. Keeping their toenails trimmed helps prevent damage to your furnishings. If you plan to trim your cat's claws, it's best to teach them how to accept this routine from a young age.

Last but not least, you may want to teach your cat how to have its teeth brushed a few times per week. At home dental care is an excellent habit since it helps prevent periodontal disease and can cut back on costly professional dental cleanings particularly later in life.

Like all other cats, the Nebelung cat requires plenty of physical exercise to maintain strength and agility. Treat your cat to the proper exercise equipment – a cat tower, if you scratching posts, and plenty of toys, including interactive options that let you join in the fun – and you'll be setting them up for a lifetime of well-being.

Nebelung cats are sometimes prone to obesity with age, however you can help prevent it by encouraging your cat to be active.

The Nebelung cat is quite healthy in general, with a lifespan that extends well over 15 years in some cases. At this time, there are no known concerns.

The Nebelung cat breed was developed in the 1980s when Cora Cobb, a woman who owned two blue-grey cats that looked like Russian Blues, but with semi-longhaired coats. These cats, named Siegfried and Brunhilde, ultimately became the foundation for the Nebelung breed.

This didn’t happen without some effort on Cora Cobb’s part. With the help of an American Cat Association feline geneticist named Solveig Pfleuger, who determined that Cobb’s beloved pets were best defined as semi-longhaired Russisan Blue cats, Cobb presented a breeding standard that incorporated all traits of the Russian Blue breed with the exception of the coat length.

Today, the Nebelung cat breed is recognized by a few registries worldwide including Livre Officiel des Origines Felines (LOOF), the World Cat Federation (WCF), and the American Cat Fanciers Association (ACFA) as well as a few independent associations. Despite growing interest and popularity, it is still difficult to find Nebelung cats in most places. 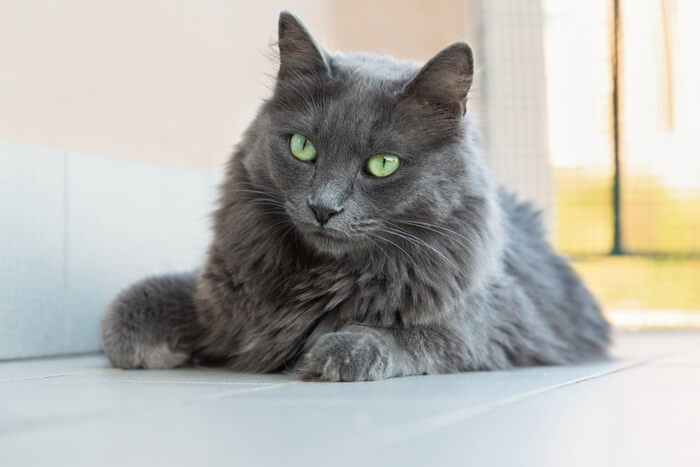 The word Nebelung is a descriptive term that translates to "Creatures of the mist" in German.

Like a few other breeds, the Nebelung cat has a tendency to choose a favorite person.

While some cats are highly adaptable, the Nebelung is not fond of change. These cats often hide when strangers come to visit, and they can suffer from a bit of anxiety whenever something changes in their environment. It can take some time for a Nebelung cat to become accustomed to new things including new people and new pets. 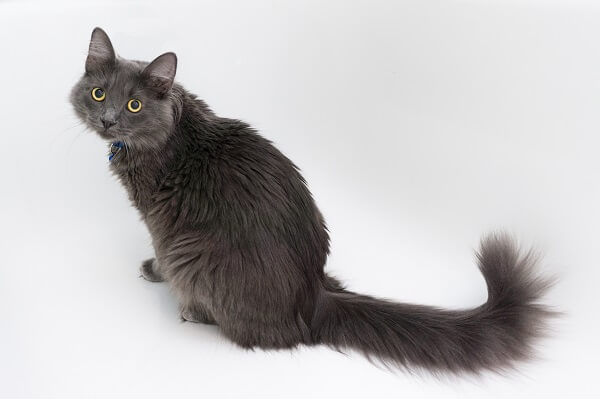 The Nebelung cat’s eyes range from yellowish-green to green in color, and should have a slightly oval shape.

The legs should be long and well-muscled. The paws should display tufting between the toes.

The Nebelung cat’s tail should be long and graceful, with elegant plumage.

A Nebelung cat’s body should be long and lean, yet well-muscled, with an overall appearance of grace.

The head should have a modified wedge shape, more pointed than it is round. It should sit atop a long, graceful neck.

The ears should be large in proportion to the head, and should display prominent furnishings.

The coat should be of medium length on the body, with the longest hair being on the tail. Both layers of this double coat should have a fine, silky feel. These cats should display a ruff at the neck that’s more prominent in males. All Nebelung cats should have longer fur “pantaloons” on the hind legs.

The outer guard hairs should be a lighter silver color than the undercoat, which should be a deeper blue.

How much does a Nebelung cat cost?

How big do Nebelung cats get?

Nebelung cats tend to be small in size. A fully grown Nebelung cat might weigh between 7-15 pounds or more and range in height anywhere from about 9"- 13" inches tall.

How long do Nebelung cats live?

The Average lifespan for Nebelung is 11-18 years.

Nebelung are long-haired cats, so you do have to expect a certain amount of shedding from this breed, but they don't shed as much as other cat breeds.