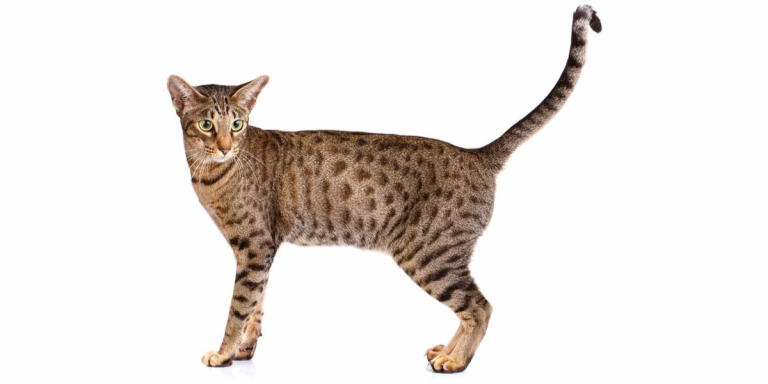 Temperament
? The breed’s dominant personality traits. While each individual has a unique personality, breed-specific genetics affect qualities like sociability, playfulness, and intelligence.
Energetic, sociable, inquisitive, affectionate
Origin
? Where this breed was first established.
United States
Other Names
? In addition to their official names, most breeds earn a few nicknames.
Leopard cat
Group
? Breeds are grouped by their size and coat type.
Medium-to-large short-haired
Height
? The typical adult height among individuals of this breed. Height is measured from the top of the head to the bottom of the front paws.
9"- 11"
Body Length
? The typical adult body length among individuals of this breed. A cat’s length is measured from the base of the tail to the tip of the nose.
12"-16"
Weight
? The typical adult weight range of this cat breed.
6-15 pounds
Life Expectancy
? The average lifespan of the breed. While life expectancy is fairly consistent across all cat breeds, some breeds tend to live shorter or longer than others.
12-18 years
Price
? The average price.
$800-$1,200
Affection Level
? Breeds with a high affection level want to give and receive a lot of attention, while less-affectionate breeds are not as interested in petting and snuggles.
0 100%
80%
Activity Level
? Breeds with high activity levels will engage more in active play and demand more space and attention.
0 100%
100%
Pet-Friendly
? How well the breed tends to get along with cats, dogs, and other pets.
0 100%
80%
Kid-Friendly
? Breeds with a higher rating in this area tend to be gentle and patient, while lower-rated breeds may feel uncomfortable with children.
0 100%
80%
Sociability
? Breeds with a higher sociability rating will want to spend time with you all day, while less-sociable breeds seldom seek out human interaction.
0 100%
80%
Intelligence
? Breeds with higher intelligence ratings are more curious, investigative, and easy to train. Less-intelligent breeds are less trainable but often laid-back and easygoing.
0 100%
80%
Playfulness
? Breeds that score higher in this area have strong hunting instincts that make them great playtime companions.
0 100%
100%
Independence
? Breeds that score higher in this area are able to spend hours alone, while less-independent breeds require plenty of attention.
0 100%
40%
Vocality
? A higher rating in this area indicates a breed prone to plenty of meowing and other vocalizations, while less-vocal breeds are happy to stay quiet.
0 100%
80%
Grooming
? Breeds with higher grooming scores require more maintenance like brushing and bathing, while lower-scored breeds are virtually maintenance-free.
0 100%
20%

About the Ocicat Cat

Despite its wild appearance, the Ocicat is one hundred percent domestic, so it’s ideal for those who long for a cat with exotic looks and a tame, friendly personality. Named for its remarkable resemblance to the ocelot, the Ocicat has a short coat that’s easy to care for, and its temperament is so gregarious that it’s often referred to as a dog in a cat’s body.

The Ocicat gets its cheerful, outgoing personality from the breeds that formed its foundation, namely Siamese and Abyssinian. This fantastic cat is capable of walking on a leash, playing fetch, and learning tricks and commands that are typically associated with dogs rather than cats.

This fun-loving cat seeks good times above all other things and will happily follow its people wherever they go. Nowhere is off limits: Many Ocicats love water and enjoy following their human friends at shower or bath time, poking curious paws into the water to make sure that everything is as it should be! Ocicat owners with koi ponds and aquariums must often go to great lengths to cat-proof or risk having their finned friends become targets for fishing.

Like Orientals and other breeds descended from Siamese, Ocicats long for human attention and can become despondent if they are ignored or neglected. Families who must spend lots of time away at work and school find that their Ocicats tend to regain their cheerful nature when they have another pet to play with. These cats typically get along well with other friendly felines and they’re equally capable of forming lifelong bonds with well-behaved dogs.

Ocicats have a reputation for greeting visitors and getting on well with entire families. At the same time, they have a tendency to choose a favorite person.

Similar to other breeds with Siamese heritage, Ocicats can be quite vocal. They love to chat back and forth with their favorite people and the more you talk to them, the more they’ll “talk” back to you! 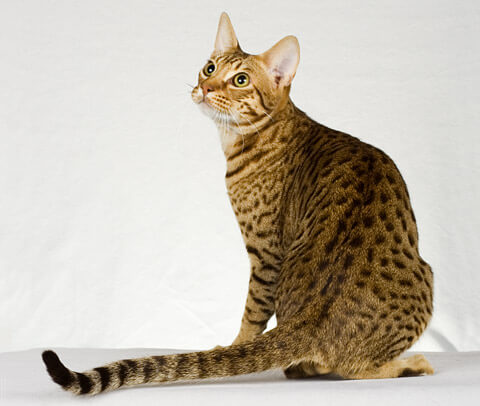 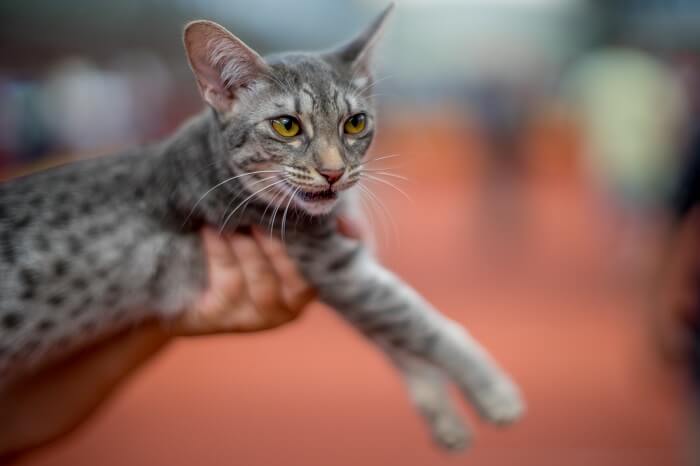 Ocicats don’t have any special nutritional needs but they do require high-protein, high-quality diets that focus on real meat and fish.

Sleek, short hair makes the Ocicat easy to care for. A once-weekly brushing should be enough to remove any loose hairs and help prevent excess shedding.

Consider brushing your cat’s teeth and think about clipping their claws regularly to prevent damage to your furniture.

Ocicats are extremely athletic, and they have no trouble zooming around the house, jumping onto the highest possible vantage points, and climbing whatever they can.

Ocicats typically enjoy good health, however they do have the potential to develop some known health issues including progressive retinal atrophy, renal amyloidosis, and hypertrophic cardiomyopathy. While these aren’t common concerns, they’re worth watching for.

The Ocicat was originally created as a hybrid, when a Michigan cat breeder named Virginia Daly used an Abyssinian and a Siamese in an attempt to produce Abyssinian-pointed Siamese. Among the offspring in matings between second generation cats with Abyssinian points was a spotted kitten named Tonga.

Tonga was neutered and enjoyed life as a pet but breeders who were attempting to produce more Abyssinian-pointed Siamese cats took note of the beautiful spotted offspring that often occurred, and interest steadily increased until separate breeding programs were formed using the formula Siamese to Abyssinian, then by breeding offspring of the first pairing to Siamese. The first “official” Ocicat was named Dalai Dotson, and was registered with The Cat Fanciers Association (CFA) in 1966. 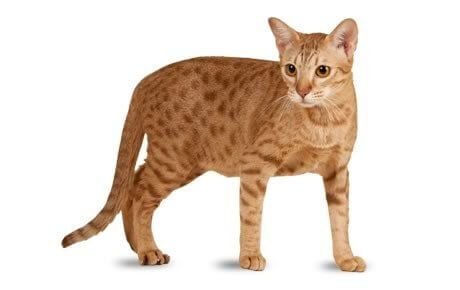 The name “Ocicat” was originally a nickname. Original Ocicat breeder Virginia Daly had a daughter - also named Virginia - who coined the term “Ocicat.”

Ocicat size varies widely: The smallest Ocicats come in at about six pounds while the largest weigh in at about fifteen pounds.

“Cat-proof” your house if you bring an Ocicat into your family! These intelligent felines quickly learn how to open doors and wiggle their way into drawers, and they’ll happily steal small objects left lying out in the open. 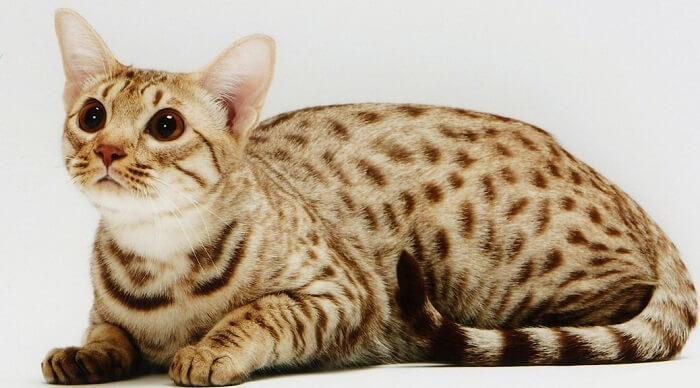 The Ocicat’s eyes should be large, with an almond shape. They should angle slightly upward toward the ears. Eyes may be of any color except blue.

The legs should be of medium length, well-muscled, and in proportion to the body. The feet should be compact, with an oval shape.

An Ocicat’s tail should be long and slim, with a slight taper at the end, and a dark-colored tip.

Ocicats are medium to large, with well-developed muscles that contribute to an athletic appearance and make the cat feel heavier than it looks. Males are typically larger than females.

The head is a modified wedge shape that displays a slight curve running from the muzzle to the cheek. The chin should be firm and the muzzle should be well-defined, with a somewhat square shape. Mature males may display jowling.

The ears should be fairly large, and should be set at a 45-degree angle. Ear tufts sometimes appear but are not required.

The coat should be smooth and lie close to the body. The texture should be satiny and soft.

Ocicats occur in a vast variety of spotted color patterns, with distinctive markings that stand out from the ground color. Individual hairs should be banded, with the exception of those on the tip of the tail, which is also the darkest portion of the coat. The hair is typically lightest on the face around the eyes, as well as on the lower jaw and chin.

How much does a Ocicat cat cost?

How big do Ocicat cats get?

Ocicat cats tend to be medium in size. A fully grown Ocicat cat might weigh between 6-15 pounds or more and range in height anywhere from about 9"- 11" inches tall.

How long do Ocicat cats live?

The Average lifespan for Ocicat is 12-18 years.

Ocicat are short-haired cats. Therefore, they do not shed as much as long-haired cat breeds.