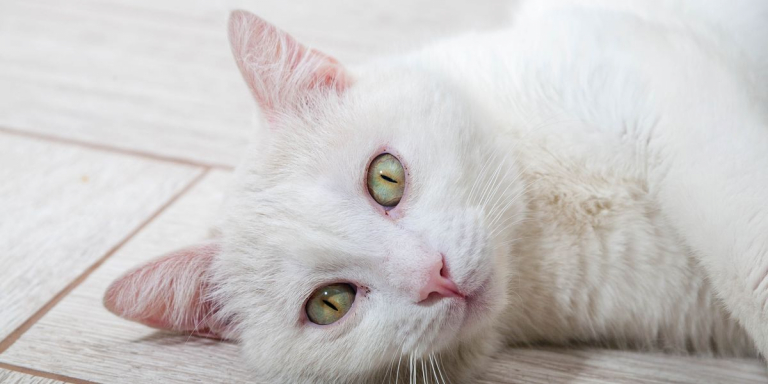 Temperament
? The breed’s dominant personality traits. While each individual has a unique personality, breed-specific genetics affect qualities like sociability, playfulness, and intelligence.
Affectionate, playful, inquisitive, family-oriented
Origin
? Where this breed was first established.
Russia
Other Names
? In addition to their official names, most breeds earn a few nicknames.
Russian shorthair
Group
? Breeds are grouped by their size and coat type.
Small to medium-sized short-haired
Height
? The typical adult height among individuals of this breed. Height is measured from the top of the head to the bottom of the front paws.
8"- 10"
Body Length
? The typical adult body length among individuals of this breed. A cat’s length is measured from the base of the tail to the tip of the nose.
12"-18"
Weight
? The typical adult weight range of this cat breed.
8-12 pounds
Life Expectancy
? The average lifespan of the breed. While life expectancy is fairly consistent across all cat breeds, some breeds tend to live shorter or longer than others.
10-15 years
Price
? The average price.
$400 - $2,000
Affection Level
? Breeds with a high affection level want to give and receive a lot of attention, while less-affectionate breeds are not as interested in petting and snuggles.
0 100%
60%
Activity Level
? Breeds with high activity levels will engage more in active play and demand more space and attention.
0 100%
60%
Pet-Friendly
? How well the breed tends to get along with cats, dogs, and other pets.
0 100%
60%
Kid-Friendly
? Breeds with a higher rating in this area tend to be gentle and patient, while lower-rated breeds may feel uncomfortable with children.
0 100%
60%
Sociability
? Breeds with a higher sociability rating will want to spend time with you all day, while less-sociable breeds seldom seek out human interaction.
0 100%
60%
Intelligence
? Breeds with higher intelligence ratings are more curious, investigative, and easy to train. Less-intelligent breeds are less trainable but often laid-back and easygoing.
0 100%
80%
Playfulness
? Breeds that score higher in this area have strong hunting instincts that make them great playtime companions.
0 100%
60%
Independence
? Breeds that score higher in this area are able to spend hours alone, while less-independent breeds require plenty of attention.
0 100%
80%
Vocality
? A higher rating in this area indicates a breed prone to plenty of meowing and other vocalizations, while less-vocal breeds are happy to stay quiet.
0 100%
20%
Grooming
? Breeds with higher grooming scores require more maintenance like brushing and bathing, while lower-scored breeds are virtually maintenance-free.
0 100%
40%

About the Russian White, Black, and Tabby Cat

Three distinct coat colors in one adorable breed: Russian White, Black, and Tabby cats were all developed with help from the much-loved Russian Blue. Stunning looks, luxurious short-haired coats, and wonderful personalities are a few things that help these kitties stand out from the crowd.

Russian Black, White, and Tabby cats are playful and personable, but not terribly mischievous. Happy to keep their families entertained, these kitties make amusing companions thanks to their high intelligence. Like their blue-haired cousins, these cats quickly learn which behaviors earn pats and praise from their human family members, and which behaviors are best avoided. They share the Russian Blue’s sensitive nature; a loud scolding is likely to hurt this individual’s feelings and send them into hiding.

Friendly and sociable with family members including other pets including well-behaved dogs, Russian Tabby, White, and Black cats have a decidedly shy streak. They aren’t at all fond of strangers and will tuck themselves safely into a safe spot when new people come to visit. This trait means they aren’t good candidates for leash training; instead, it’s best to provide plenty of indoor exercise opportunities that allow for safe enjoyment on the cat’s terms.

Those who spend long hours away from home will be glad to hear that Russian White, Black, and Tabby cats are perfectly fine with the idea of keeping themselves entertained (or asleep) while their human friends are at work or school. They’re likely to greet you with a series of happy meows and a wiggling tail when you return.

Speaking of meows, these kitties are somewhat talkative, but far less so than their Siamese ancestors. They have a reputation for talking back when spoken to, and for reaching out with a questioning paw when they’d like to receive some attention. Some will “sing” to themselves while playing with a favorite toy, and some will become fairly demanding when they sense mealtime approaching.

If you’re lucky enough to make a Russian White, Black, or Tabby cat part of your family, you’ll enjoy a lifetime of companionship, cozy snuggles, and friendly chats. 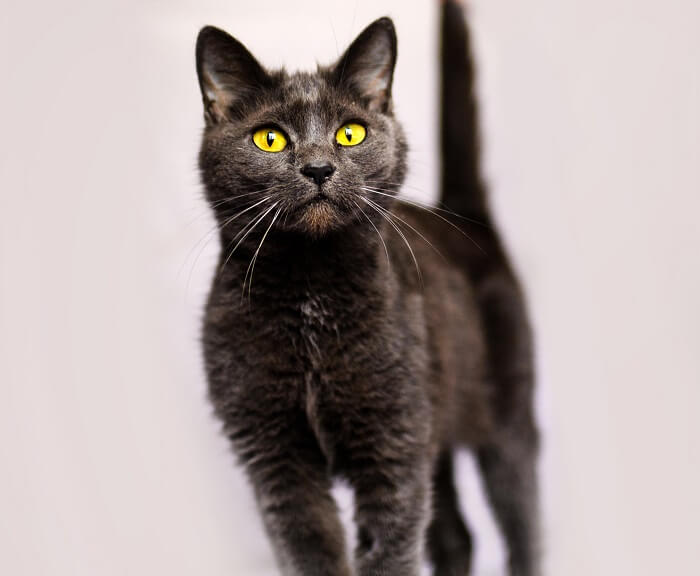 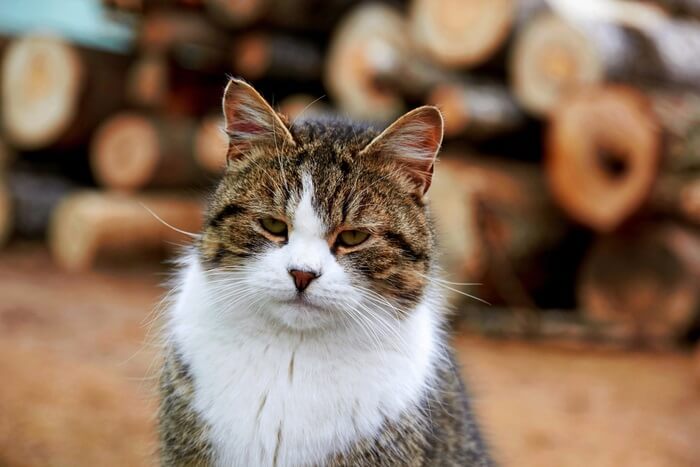 Russian White, Black, and Tabby cats have no unusual nutritional needs; however, we recommend offering a high-quality diet, whether that’s fresh food or a commercial diet that’s high in protein and low in carbohydrates. Foods that rely on real fish or real meat as the main ingredient are best. Remember to choose a food that’s appropriate for your cat’s life stage.

Russian White, Black, and Tabby cats have short coats that are easy to care for. A weekly brushing will prevent excess shedding and cut back on hairballs, plus it’s a ritual that your cat is likely to enjoy. Other routines to consider include regular nail trims and toothbrushing.

Even though Russian White, Black, and Tabby cats develop laid-back personalities once they reach adulthood, they do enjoy playtime. Offer a cat tower and consider setting up at least one window seat; these kitties love to jump and climb. Provide a good assortment of toys including little balls and catnip mice, interactive wands, and puzzle toys. Your cat (and your furniture) will appreciate a few good scratching posts, too.

These kitties typically enjoy good health. Even though they are hybrids with no known genetic issues, they can suffer from common feline diseases including urinary tract disease, kidney and bladder stones, periodontal disease, and hypertrophic cardiomyopathy. Obesity can occur too, particularly in older cats; with it can come diabetes and many other complications.

Russian White, Black, and Tabby cats are the result of an Australian breeding program that began with a white Siberian cat and a Russian Blue cat. The White Siberian cat had no pedigree, however when she was mated to a Russian Blue, she produced two white offspring. The breeders, Dick and Mavis Jones of Myemgay Cattery, kept a white kitten and named it White Rose. When she reached adulthood, she looked like a pure white version of a Russian Blue.

White Rose was mated back to her Russian Blue sire, Myemgay Yuri. She gave birth to two more White Russian kittens, which were eventually paired with Russian Blue stud cats. The best white kittens were continually bred back to Russian Blues until the breed was fully established. The Royal Agricultural Society (RAS) of New South Wales, Australia, granted Championship status in 1975, but only to the Russian White.

Russian Black and Russian Tabby kittens can occur when two Russian Blue cats are mated to one another, and they sometimes occur when one parent is a Russian White.

Not all registries recognize all “Russian” cat colors or place them all in the same category. For example, The Cat Fanciers Association (CFA) and Federation International Feline (FIFe) only recognize Russian Blues. The Governing Council of the Cat Fancy (GCCF) recognizes Russian White and Russian Black cats, and the American Cat Fanciers Association (ACFA) has distinct breed standards that separate Russian Blues from Russian Shorthairs in blue, white, and black colors. 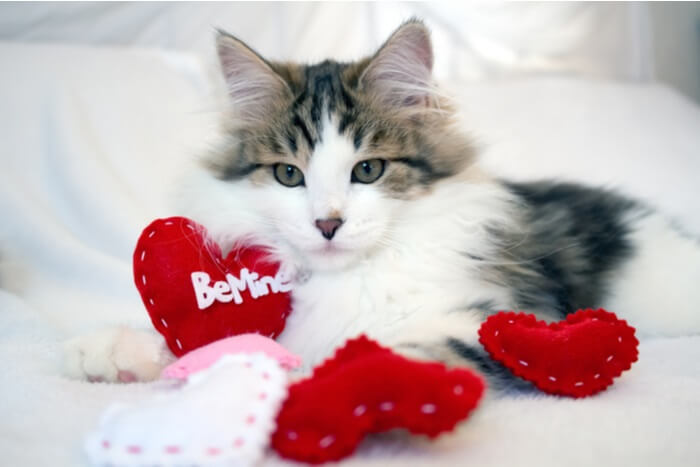 The Russian Blue cats that contributed to the Russian White, Black, and Tabby variations are direct descendants of Siamese. This explains why Russian shorthair cats tend to be so talkative.

All “Russian” cat colors share similarities in coat texture. This uniquely thick, lustrous coat has often been compared to that of a seal or a beaver, with very fine undercoat hairs and guard hairs that stand out from the body rather than lying completely flat. 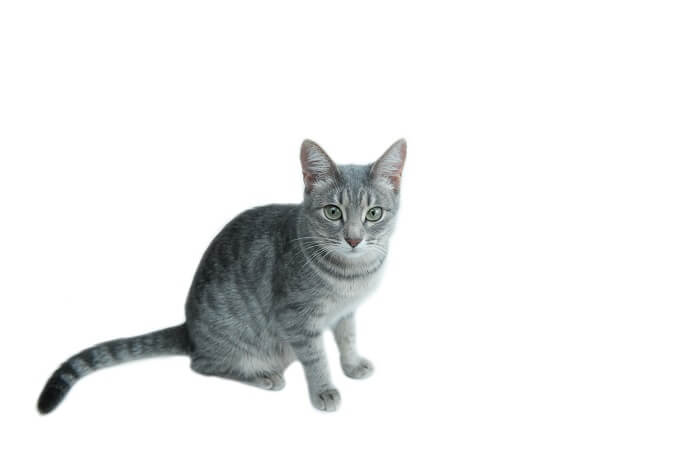 The eyes should be rounded and set wide apart. Brilliant green eye colors are present in all Russian shorthair cat colors including white; kittens may have yellow eyes that transition to green by adulthood.

The legs should be long and fine-boned, and the paws should be small with a slightly rounded profile.

Russian white, black, and blue cats should have long well-proportioned tails that taper from base to tip.

Russian White, Black, and Tabby cats are of medium size, with fine bones and an athletic, finely muscled appearance.

The head should be a medium wedge shape. The muzzle should be blunt, continuing the head’s wedge-shaped profile. No nose break should be visible, and whisker pads should not be overly prominent.

Russian White, black, and tabby cats have comparatively large ears with wide bases, pointed tips, and little to no furnishing.

Russian White, Black, and Tabby cats have double coats with a dense, fine texture and a superbly soft feel.

Solid white, solid black, and tabby colors are allowed by various breed registries. Russian white kittens may be born with a colored “cap” of darker hair on their heads, which disappears by full adulthood.

How much does a Russian White, Black, and Tabby cat cost?

How big do Russian White, Black, and Tabby cats get?

How long do Russian White, Black, and Tabby cats live?

The Average lifespan for Russian White, Black, and Tabby is 10-15 years.

Russian White, Black, and Tabby are short-haired cats. Therefore, they do not shed as much as long-haired cat breeds.