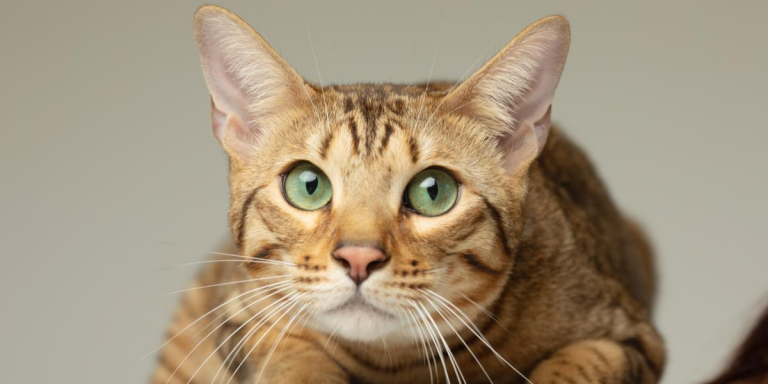 Temperament
? The breed’s dominant personality traits. While each individual has a unique personality, breed-specific genetics affect qualities like sociability, playfulness, and intelligence.
Gentle, outgoing, loyal, playful
Origin
? Where this breed was first established.
United States
Group
? Breeds are grouped by their size and coat type.
Medium-sized short-haired
Height
? The typical adult height among individuals of this breed. Height is measured from the top of the head to the bottom of the front paws.
8"- 10"
Body Length
? The typical adult body length among individuals of this breed. A cat’s length is measured from the base of the tail to the tip of the nose.
12"-16"
Weight
? The typical adult weight range of this cat breed.
8-15 pounds
Life Expectancy
? The average lifespan of the breed. While life expectancy is fairly consistent across all cat breeds, some breeds tend to live shorter or longer than others.
8-12 years
Price
? The average price.
$600 - $2,000
Affection Level
? Breeds with a high affection level want to give and receive a lot of attention, while less-affectionate breeds are not as interested in petting and snuggles.
0 100%
80%
Activity Level
? Breeds with high activity levels will engage more in active play and demand more space and attention.
0 100%
80%
Pet-Friendly
? How well the breed tends to get along with cats, dogs, and other pets.
0 100%
80%
Kid-Friendly
? Breeds with a higher rating in this area tend to be gentle and patient, while lower-rated breeds may feel uncomfortable with children.
0 100%
80%
Sociability
? Breeds with a higher sociability rating will want to spend time with you all day, while less-sociable breeds seldom seek out human interaction.
0 100%
60%
Intelligence
? Breeds with higher intelligence ratings are more curious, investigative, and easy to train. Less-intelligent breeds are less trainable but often laid-back and easygoing.
0 100%
80%
Playfulness
? Breeds that score higher in this area have strong hunting instincts that make them great playtime companions.
0 100%
80%
Independence
? Breeds that score higher in this area are able to spend hours alone, while less-independent breeds require plenty of attention.
0 100%
60%
Vocality
? A higher rating in this area indicates a breed prone to plenty of meowing and other vocalizations, while less-vocal breeds are happy to stay quiet.
0 100%
100%
Grooming
? Breeds with higher grooming scores require more maintenance like brushing and bathing, while lower-scored breeds are virtually maintenance-free.
0 100%
80%

About the Serengeti Cat

Despite its exotic-sounding name, the Serengeti Cat is 100% domestic. These beautiful, playful cats were developed by crossing Bengal cats with Oriental Shorthairs. If you've been on the fence about which breed is your favorite, the Serengeti might be ideal for you as it brings so many positive traits together.

As you might expect, this long-legged kitty is an exceptional athlete that thrives in an atmosphere where activities such as jumping and climbing are supported. The Serengeti cat's ideal family provides plenty of high perches that allow for a great view of everything that's happening, and they understand the importance of keeping important items out of reach. These curious cats do not make a distinction between their toys and your keepsakes, so be sure to keep those collectibles secured. Like the Oriental Shorthair, the Serengeti Cat has nimble toes that are perfect for opening cupboards and drawers. Childproof locks might thwart their efforts at inspecting cabinet interiors, however these kitties are highly intelligent and can sometimes find their way into places that surprise their families.

Besides having the ability to get into everything, Serengeti cats can learn how to turn on faucets, sometimes making it necessary to swap lever style handles for knobs. Luckily, these kitties are capable of learning more desirable tricks. If you ever wanted to play fetch with a cat, the Serengeti might be your ideal companion.

Speaking of companionship, Serengetis do not like to be left alone. These cats thrive on attention, whether it's from their human family members, other cats, or friendly dogs. They do take some time to warm up to new people and new animals, but once they make friends, they're wonderfully loyal and exceptionally chatty. 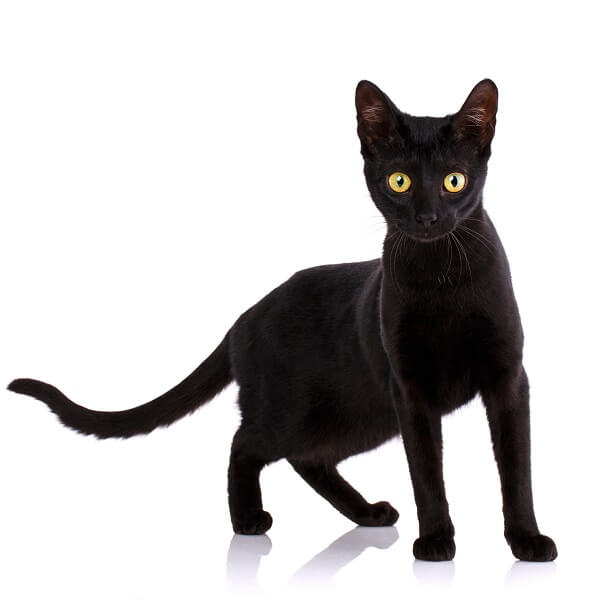 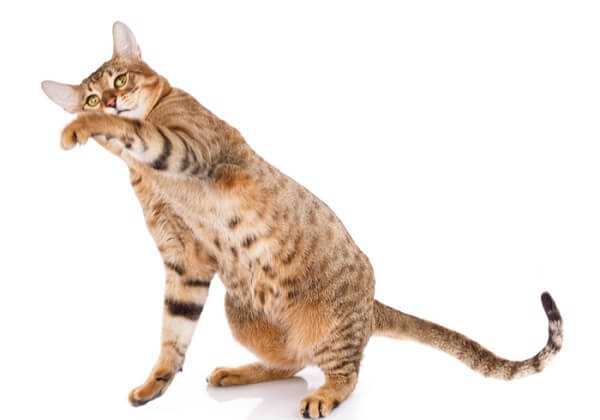 Serengeti cats do not require a special diet, however it is a very good idea to provide this rare feline with the best possible food. If you opt for a commercial brand, we recommend choosing one that's high in protein and low in carbohydrates, with real meat or fish as the main ingredient.

These cats offer exceptionally easy care thanks to their ultrashort coats. Brush your cat once or twice per week to remove any loose hair and you'll drastically reduce shedding while simultaneously reducing the risk of hairballs.

Serengeti Cats are high-energy felines that require plenty of stimulation and lots of room to play. Be sure to offer plenty of approved play structures and consider building a catio to keep this cat mentally and physically satisfied.

In addition to cat trees, scratching posts, and toys, interactive play is appreciated. Serengeti cats are much like their Oriental cousins in that they can develop destructive behaviors if they aren't given enough attention or appropriate outlets for their energy.

If you like, you can teach the Serengeti to walk on a leash. They’re one of a few cat breeds that like to accompany their people on safe walks through the neighborhood!

Serengeti Cats are generally healthy, with no known genetic issues.

Serengeti Cats were developed in 1994 by biologist Karen Sausman of California's Kingsmark Cattery. This is a relatively rare cat breed that is produced by crossing Bengal and Oriental cats. Incredibly, and even though the Bengal cats that are used as foundation stock are several generations removed from their wild ancestors, these kitties have a surprising resemblance to the Serval, with large upright ears and an incredible spotted coat.

It’s very important to note that there is no Serval blood in the Serengeti cat.

In 1995, a project for breed development resulted in the expansion of the Serengeti. These cats are now bred throughout the USA, Europe, the UK, Russia, and Australia.

To date, The International Cat Association (TICA) is the only breed registry that accepts Serengeti Cats. 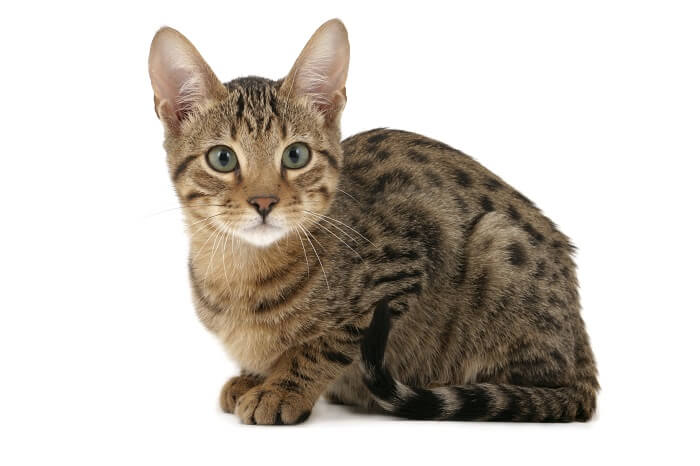 The Serengeti cat may appear wild and independent, but the truth is these cats love company so much that they have been nicknamed "Velcro cats!"

Some Serengeti cats have unique melanistic markings that create ghost spots and ghost stripes similar to those seen on black jaguars.

If you've been looking for a cat that doesn't shed much, consider adding the Serengeti to your shortlist. Their coats barely drop stray hairs at all, particularly if you offer routine brushing. 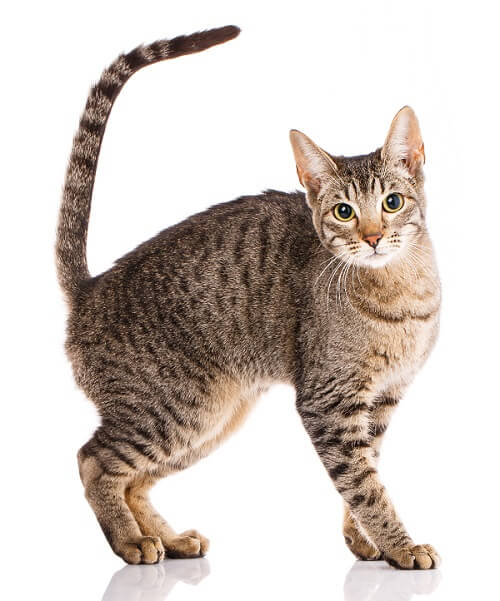 The eyes should be round and open, and should be of an amber to gold color.

The legs should be long and graceful, with athletic musculature. The paws should be strong, with nimble toes.

The tail should be graceful and well-proportioned to the body. It should be tapered, but not whippy.

The body should be of medium size, with a graceful, tubular shape.

The head should be fairly small, with a wide muzzle and prominent whisker pads. The neck should be long and slender, blending into the base of the skull without tapering.

The Serengeti cat’s ears should be very large, broad, and deep, with wide, rounded tips. They should appear upright rather than angled on the head.

The coat should be short and plush, with a very soft feel.

How much does a Serengeti cat cost?

How big do Serengeti cats get?

Serengeti cats tend to be medium in size. A fully grown Serengeti cat might weigh between 8-15 pounds or more and range in height anywhere from about 8"- 10" inches tall.

How long do Serengeti cats live?

The Average lifespan for Serengeti is 8-12 years.

Serengeti are short-haired cats. Therefore, they do not shed as much as long-haired cat breeds.