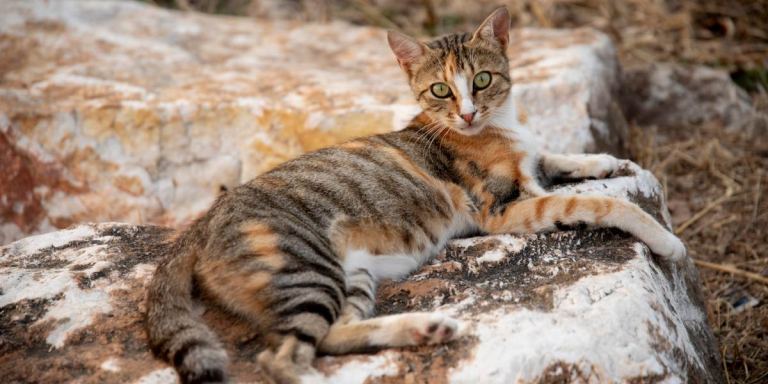 Temperament
? The breed’s dominant personality traits. While each individual has a unique personality, breed-specific genetics affect qualities like sociability, playfulness, and intelligence.
Friendly, intelligent, dog-like, inquisitive
Origin
? Where this breed was first established.
Kenya
Other Names
? In addition to their official names, most breeds earn a few nicknames.
Sokoke Forest Cat, African Shorthair, khadzonzo or kadzonzo
Group
? Breeds are grouped by their size and coat type.
Medium-sized short-haired
Height
? The typical adult height among individuals of this breed. Height is measured from the top of the head to the bottom of the front paws.
7"- 8"
Body Length
? The typical adult body length among individuals of this breed. A cat’s length is measured from the base of the tail to the tip of the nose.
12"-16"
Weight
? The typical adult weight range of this cat breed.
5-10 pounds
Life Expectancy
? The average lifespan of the breed. While life expectancy is fairly consistent across all cat breeds, some breeds tend to live shorter or longer than others.
15-20 years
Price
? The average price.
$500 - $2000
Affection Level
? Breeds with a high affection level want to give and receive a lot of attention, while less-affectionate breeds are not as interested in petting and snuggles.
0 100%
80%
Activity Level
? Breeds with high activity levels will engage more in active play and demand more space and attention.
0 100%
80%
Pet-Friendly
? How well the breed tends to get along with cats, dogs, and other pets.
0 100%
80%
Kid-Friendly
? Breeds with a higher rating in this area tend to be gentle and patient, while lower-rated breeds may feel uncomfortable with children.
0 100%
100%
Sociability
? Breeds with a higher sociability rating will want to spend time with you all day, while less-sociable breeds seldom seek out human interaction.
0 100%
80%
Intelligence
? Breeds with higher intelligence ratings are more curious, investigative, and easy to train. Less-intelligent breeds are less trainable but often laid-back and easygoing.
0 100%
80%
Playfulness
? Breeds that score higher in this area have strong hunting instincts that make them great playtime companions.
0 100%
80%
Independence
? Breeds that score higher in this area are able to spend hours alone, while less-independent breeds require plenty of attention.
0 100%
60%
Vocality
? A higher rating in this area indicates a breed prone to plenty of meowing and other vocalizations, while less-vocal breeds are happy to stay quiet.
0 100%
60%
Grooming
? Breeds with higher grooming scores require more maintenance like brushing and bathing, while lower-scored breeds are virtually maintenance-free.
0 100%
80%

About the Sokoke Cat

Also known as the Sokoke Forest cat or the African Shorthair, the Sokoke is an exotic-looking breed that originated in Eastern Kenya. A striking coat, a friendly personality, and a fondness for conversation makes this unique breed one to consider. If you’re looking for a cuddly, cozy companion, you might find the Sokoke cat a bit aloof. These cats do enjoy human companionship, but only on their terms. They have a marked distaste for being picked up and snuggled; instead, they prefer to follow their family members around, sometimes opting to rest alongside a favorite person during downtime.

Sokoke Forest cats are accomplished athletes, with a fondness for active pursuits. Cupboards and drawers don’t present much of an obstacle to the Sokoke, making cat-proofing well worth the effort. Since these cats like water, it’s important to secure aquariums well, too. Any small item can become a toy for this curious kitty, so it’s important to keep important objects secured or risk having them chewed and clawed into oblivion.

Speaking of claws, this cat isn’t afraid to lash out when threatened or disrespected. While Sokoke cats can make lifelong friends with kids, other felines, and respectful dogs, they are a touch less tolerant than most, making careful introductions even more important than usual.

Despite this kitty’s insistence on respect, most individuals love everyone and when well-socialized, will even greet strangers at the door. When family members return from a long day at work, the Sokoke is usually right there to say hello and have a chat about everything that happened during their human’s absence.

Because Sokoke cats originated in a warm climate and have low cold tolerance, these kitties do best with families that also appreciate warmth. They can develop tolerance for cool temperatures, but prefer to keep cozy. They are not well-suited to life outdoors. 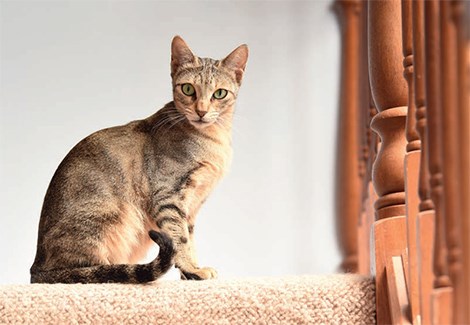 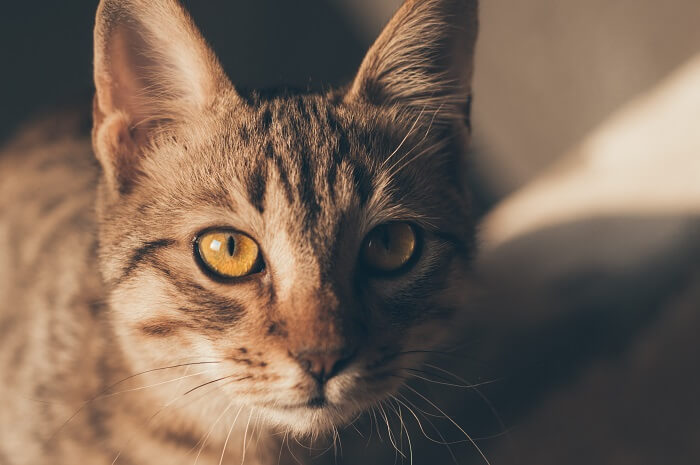 Even though Sokoke cats have no special nutritional needs, they thrive on a high-quality diet. If you’re not feeding fresh food, look for a brand that provides ample protein and few carbohydrates. Ensure that real meat or fish – not a filler – is the main ingredient. In addition, ensure that you’re feeding food that’s appropriate for your cat’s life stage.

The Sokoke cat has a very short, low-shedding coat, and does not require much at all in terms of grooming. As they dislike much handling, you might be best off putting your grooming efforts toward toenail trims and toothbrushing rather than brushing.

Teach your cat how to be handled from a young age and these routines won’t present quite so much of a challenge when your kitty reaches adulthood.

You probably won’t have to encourage your Sokoke cat to exercise! These kitties are powerful jumpers and capable climbers; and when it comes to running, they’re certifiable speed demons. A strong cat condo with platforms and at least one cave will be appreciated, and scratching posts can help save your furniture.

Offer your cat lots of toys and swap them out frequently to prevent boredom. As Sokoke cats can be very hard on their toys, keep an eye out for broken or excessively worn parts and discard those before anything harmful ends up in your pet’s digestive tract.

Sokoke cats have a reputation for enjoying robust good health, and to date, there are no known genetic issues with the breed. They are more vulnerable to contagious diseases than most other cats are, as they have little to no built-in resistance to common diseases that affect domestic cats. It’s very important to provide routine vaccinations and regular checkups, and to prevent contact between Sokoke cats and unvaccinated felines.

In 1977, wildlife artist Jeni Slater found a cat and kittens living near the edge of a forest on a tract of land her family owned in Kenya’s eastern Sokoke district. She eventually took two kittens: A male and a female, and from these two, a new cat breed was formed.

Because the cats she found had such unusual markings, Slater believed that they might be wildcats, although other theories suggest that the queen might have been a cross between a domestic cat and a wildcat, or that the cat might have had a genetic mutation that led to her unique appearance. Another theory – and the most probably – is that the foundation cats were feral khadzonzo cats, which are naturally occurring domestic cats.

In 1978, Slater began her breeding program in earnest, using cats from the Watamu area. Some were obtained as kittens, and others were adult feral cats that she tamed with the help of food rewards. The Sokoke cat breeding program was expanded in 1983, when Gloria Moeldrop brought a pair of Slater’s cats to Denmark. These cats were shown beginning in 1984.

In 1987, Slater brought in another cat to enhance genetic diversity. This time, it was a darker-colored street cat, also from Watamu. It is possible that the lynx point pattern seen in some Sokoke cats originated with this individual.

The Denmark breeding program expanded in 1989, with the addition of more cats from Kenya. Around the same time, Jeni Slater provided foundation stock to an Italian breeder named Bob Schwartz.

Later, Jeannie Knocker, an English citizen who lived near Slater in Kenya, decided to gather more feral cats from the Sokoke forest area. These produced litters that were eventually exported to Europe and the United States. With these cats came a new line of Sokoke cats, with distinct differences from those from Slater’s breeding line. It is possible that other breeds contributed to today’s Sokoke cats, however no one knows for certain. 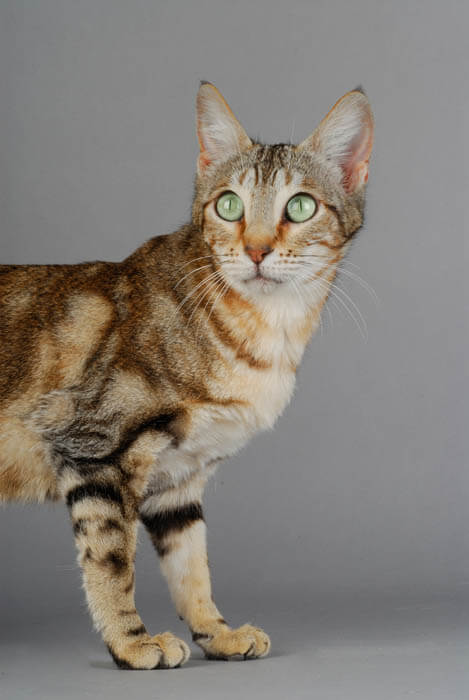 Sokoke cats get their unique tabby patterns from the agouti gene. The pattern is sometimes called African pattern or African tabby.

The Sokoke is among the rarest of all cat breeds, so count yourself fortunate if you’re able to add one to your family!

Snow Sokokes are exceptionally rare: This unique pattern features a pale body with faint, visible tabby markings everywhere except the points, where darker tabby markings can be seen. 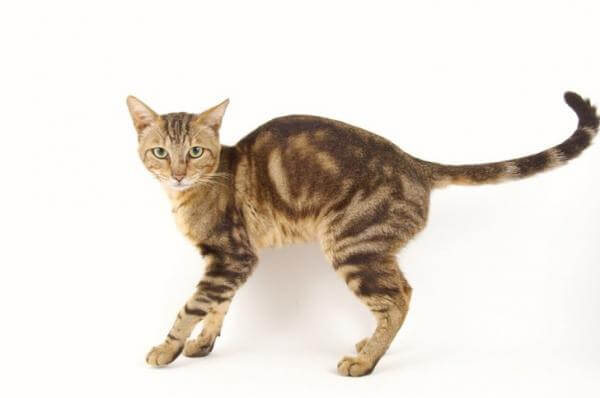 The Sokoke’ cat’s eyes should be moderately large and set wide apart, with a slight almond shape and a slight upward slant toward the base of the ears.

The legs are long and slim, tapering to medium to small oval feet.

The Sokoke cat’s tail should be medium to long, with a distinct whip-like taper.

The body is long, lean, and athletic, with well-defined musculature and a graceful appearance. Males are typically larger than females.

The Sokoke cat’s head is a modified wedge that appears small when compared with the body. High, well-defined cheekbones, a broad nose, and a soft curve at the bridge of the nose are prominent features. The whisker pads should be gently rounded, and the chin should be strong.

The ears should be moderately large and upright.

The Sokoke cat has a single coat with slightly coarse hair that exhibits a glossy sheen.

Sokoke cats are usually of a modified brown tabby color, with classic tabby markings that are muted by agouti ticking.

How much does a Sokoke cat cost?

How big do Sokoke cats get?

Sokoke cats tend to be medium in size. A fully grown Sokoke cat might weigh between 5-10 pounds or more and range in height anywhere from about 7"- 8" inches tall.

How long do Sokoke cats live?

The Average lifespan for Sokoke is 15-20 years.

Sokoke are short-haired cats. Therefore, they do not shed as much as long-haired cat breeds.