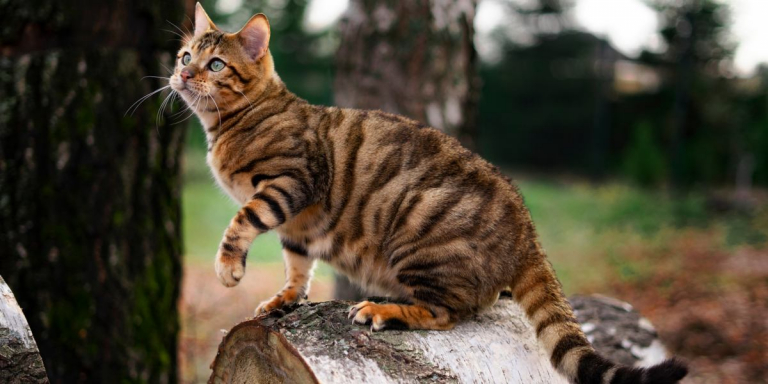 Temperament
? The breed’s dominant personality traits. While each individual has a unique personality, breed-specific genetics affect qualities like sociability, playfulness, and intelligence.
Active, affectionate, playful, intelligent
Origin
? Where this breed was first established.
United States
Other Names
? In addition to their official names, most breeds earn a few nicknames.
California Toyger
Group
? Breeds are grouped by their size and coat type.
Medium-sized short-haired
Height
? The typical adult height among individuals of this breed. Height is measured from the top of the head to the bottom of the front paws.
8"- 10"
Body Length
? The typical adult body length among individuals of this breed. A cat’s length is measured from the base of the tail to the tip of the nose.
12"-16"
Weight
? The typical adult weight range of this cat breed.
7-15 pounds
Life Expectancy
? The average lifespan of the breed. While life expectancy is fairly consistent across all cat breeds, some breeds tend to live shorter or longer than others.
12-15 years
Price
? The average price.
$1200 - $3000
Affection Level
? Breeds with a high affection level want to give and receive a lot of attention, while less-affectionate breeds are not as interested in petting and snuggles.
0 100%
100%
Activity Level
? Breeds with high activity levels will engage more in active play and demand more space and attention.
0 100%
100%
Pet-Friendly
? How well the breed tends to get along with cats, dogs, and other pets.
0 100%
100%
Kid-Friendly
? Breeds with a higher rating in this area tend to be gentle and patient, while lower-rated breeds may feel uncomfortable with children.
0 100%
80%
Sociability
? Breeds with a higher sociability rating will want to spend time with you all day, while less-sociable breeds seldom seek out human interaction.
0 100%
60%
Intelligence
? Breeds with higher intelligence ratings are more curious, investigative, and easy to train. Less-intelligent breeds are less trainable but often laid-back and easygoing.
0 100%
100%
Playfulness
? Breeds that score higher in this area have strong hunting instincts that make them great playtime companions.
0 100%
100%
Independence
? Breeds that score higher in this area are able to spend hours alone, while less-independent breeds require plenty of attention.
0 100%
60%
Vocality
? A higher rating in this area indicates a breed prone to plenty of meowing and other vocalizations, while less-vocal breeds are happy to stay quiet.
0 100%
40%
Grooming
? Breeds with higher grooming scores require more maintenance like brushing and bathing, while lower-scored breeds are virtually maintenance-free.
0 100%
20%

In spite of its wild sounding name and exotic looks that lend the appearance of a toy tiger, the Toyger cat is 100% domestic. These kitties love their families, easily bonding with people of all ages. Not only do they love humans, they easily form friendships with other animals.

While Toyger cats are friendly and outgoing, they don't mind being left on their own so long as their humans are gone for only a short while. If you're someone who spends more time away than you are able to spend at home, this might not be the right breed for you. Of course if you're open to having two cats, they'll keep each other entertained and welcome you each time you return. 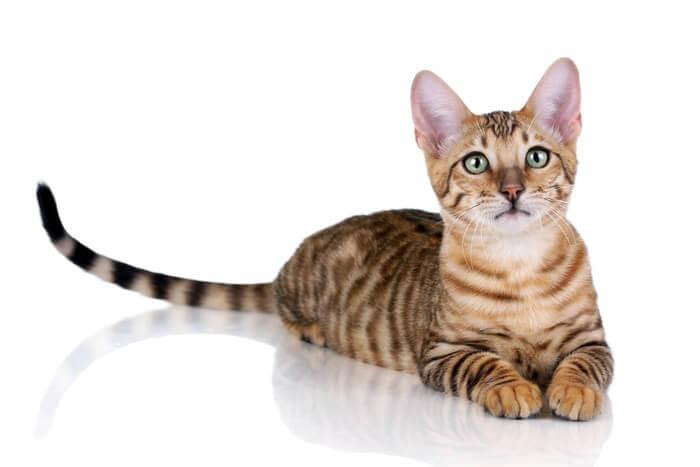 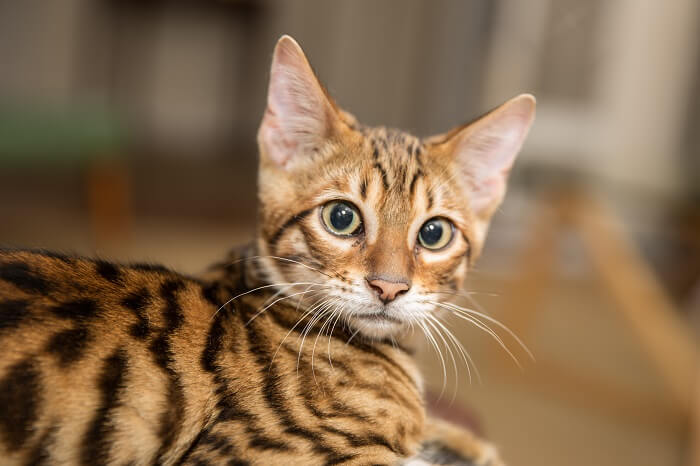 The Toyger cat has no special nutritional needs. At the same time, a quality diet is extremely important for good health and longevity. If you're not feeding fresh food, we recommend choosing a brand that names real meat or fish as the number one ingredient.

The Toyger cat does have a very short coat, however the fur's texture is thick and plush. These kitties benefit from regular brushing – at least once or twice per week. While Toyger cats are perfectly capable of grooming themselves, brushing helps cut back on shedding and reduces the risk of hairballs.

As Toygers are extremely active, you may also wish to keep their toenails trimmed. In addition, you can help your cat live a healthier life by brushing their teeth at least a few times per week. All of these grooming routines will be easier if you teach your cat to accept them beginning at a young age.

Toygers tend to be highly active. Besides climbing cat towers, jumping from one piece of furniture to the next, and running through the house at lightning speed, these kitties enjoy playing with toys, particularly when their people are involved.

When choosing toys for your Toyger, look for options that are likely to stimulate their mind as well as their body. After all, these incredible felines are highly intelligent, with a fondness for puzzles and interactive toys.

The Toyger cat is highly trainable, so consider teaching some tricks and offering leash training, which will give you one more way to provide your cat with some exercise while allowing them to enjoy the great outdoors in safety.

Toyger cats have a reputation for good health, however they have inherited some known issues from their Bengal ancestors. Some individuals are at an elevated risk for developing cataracts, and others may develop hypertrophic cardiomyopathy or heart murmurs.

Toyger cats are the results of breeding Bengal cats with domestic shorthair breeds with tabby markings. Developed by breeder Judy Sugden of California’s EEYAA cattery in the late 1980s, the Toyger cat is meant to display tigerlike features including a deep orange to red-brown coat with prominent stripes throughout and a wild looking face to match.

The breed got its start when Sugden noticed that her cat Millwood Sharp Shooter had circular facial markings similar to a tiger's. With the help of a domestic shorthair tabby cat named Scrapmetal and a Bengal cat named Millwood Rumpled Spotskin, the Toyger breeding program was off to a good start.

In 1993, another founding member was added to the lineup. This time it was a street cat from Kashmir, India. The cat, named Jammu Blu, had spotted markings between his ears instead of tabby stripes. Approximately 40 other cats, many of them on pedigreed domestic shorthairs with striped coats, were selected for use as foundation stock.

1993 was a banner year for the Toyger cat, as two more breeders, Alice McKee and Anthony Hutcherson joined such then in working toward official recognition. That same year, The International Cat Association (TICA) accepted the Toyger cat breed for registration only. In 2007, TICA granted the Toyger championship status. Even so, it remains one of the world's rarest cat breeds. 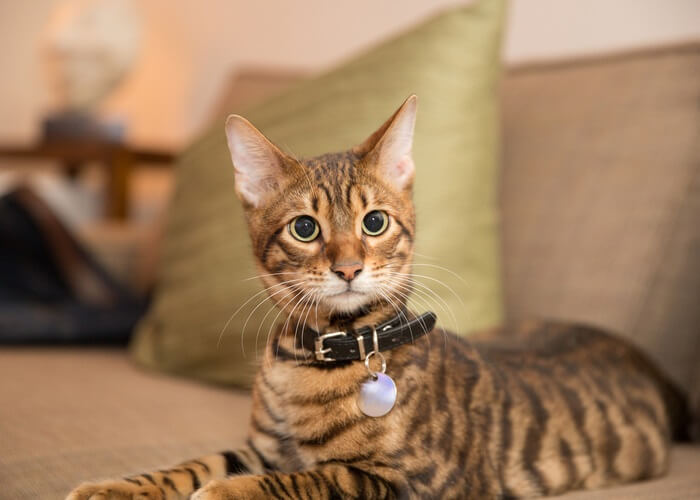 Toyger breed standards are highly detailed. To be considered an Toyger by TICA, a cat must possess 14 unique features. Many pet quality Toyger cats do not meet breed standard but have all the wonderful personality traits that make these cats so desirable. As of 2020, there are under 500 registered Toyger cats worldwide. 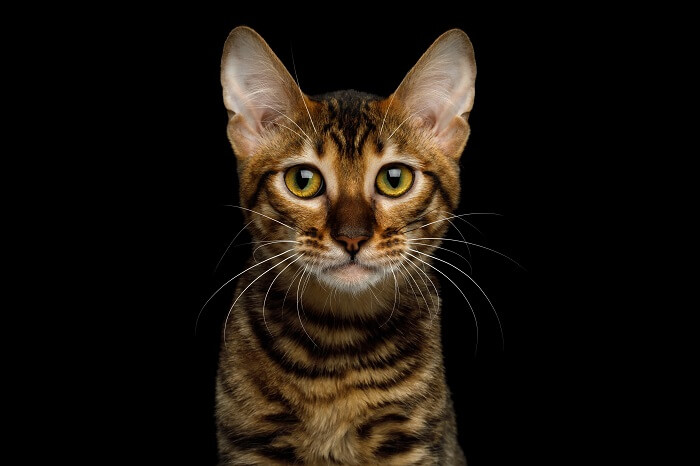 The Toyger cat’s eyes should be of small to medium size, and should display a circular shape with gentle hooding at the upper inside.

The legs should be of medium length, so that the space between the ground and the cat’s body appears equal to the torso’s depth. The feet should be large, with long toes that exhibit prominent knuckles.

The Toyger’s tail should be very long and rope-like, with a rounded tip.

The body should be larger and longer than that of a typical cat when viewed in proportion to the rest of the cat’s anatomy. The forequarters should display ample strength, and the shoulders may rise up to interrupt the cat’s topline. The chest should be broad and deep, amplifying the impression of a strong, robust feline. The cat’s shape should exhibit rolling contours, and should not appear blocky. Females may appear more delicate and less athletic than males.

The Toyger cat’s head should be of medium size, and should be long, broad, and deep. From the side, it should appear as a half-hexagon, defined by angle change points at the chin, nose, forehead, and rear portion of the skull. The chin should be strong, wide, and deep; the muzzle well-defined, and the nose muscular, long, rounded, and widened toward the end to a width at least as wide as the space between the eyes. From the front, the face should form an elongated upside-down heart shape that extends from the forehead to the well-rounded whisker pads.

The ears should be rounded, and should be set as much to the sides of the head as on the top. Lynx tipping is considered undesirable.

The coat should be short, with markings perhaps slightly longer than the ground color. Jowl ruffs and areas of longer fur at the temples are acceptable. The Toyger’s fur should be thick and luxurious, with a soft, plush feel.

How much does a Toyger cat cost?

How big do Toyger cats get?

Toyger cats tend to be medium in size. A fully grown Toyger cat might weigh between 7-15 pounds or more and range in height anywhere from about 8"- 10" inches tall.

How long do Toyger cats live?

The Average lifespan for Toyger is 12-15 years.

Toyger are short-haired cats. Therefore, they do not shed as much as long-haired cat breeds.