Svetlana Petrova is a very talented artist who also happens to be a cat lover. Over a decade ago, she launched Fat Cat Art, and if you’ve spent any time on social media, you’ve probably seen her work. Her late kitty, Zarathustra, was the inspiration behind these entertaining works of art, and together they inspired each other.

Zarathustra was inherited by Svetlana after her mother’s passing, and just as cats do, he left a permanent paw print on her heart and will never be forgotten. I’ve been a fan of Fat Cat Art for many years and reached out hoping to learn more about her work and Zarathustra, a chubby and super charming ginger kitty cat who has won the hearts of millions of cat lovers online. 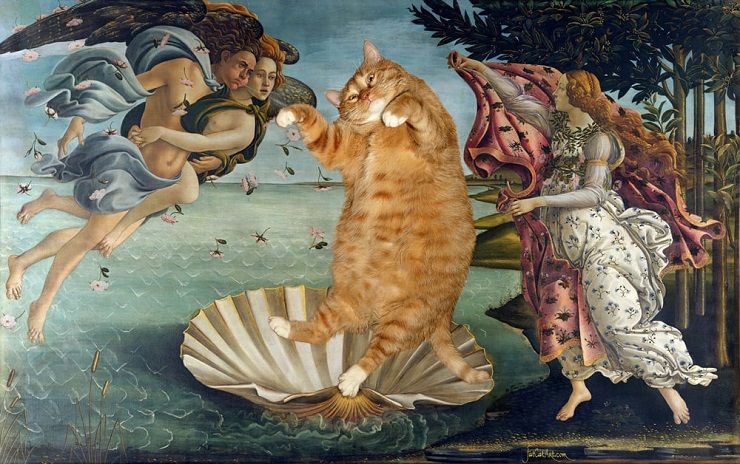 You started Fat Cat Art in 2011, how many works do you think you’ve made with Zarathustra since then?

I made more than 200 paintings and more than 60 animated videos. 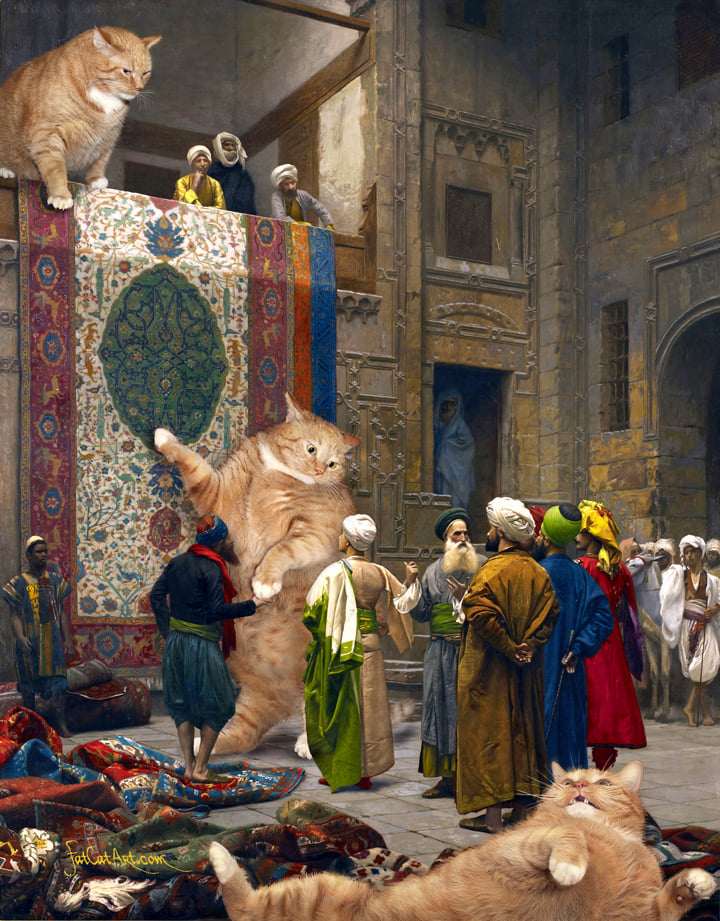 What inspired you to create this work?

Fat Cat Art is a very personal project. Zarathustra the Cat is my mother’s cat; I adopted him after she died in 2008. I was so close to my mother, and miss her so much. Zarathustra was and is a living memory of my mother.

Zarathustra saved me from depression after my mother’s death. Before, when I created a bizarre fashion show, I made artworks with my other cat Marc, and one of my friends told me: “why you don’t do any art with your new cat Zarathustra, he is so funny!” And he was: he was fat, my mother spoiled him immensely, it is her words on the site, that he is “the best cat in the world”. 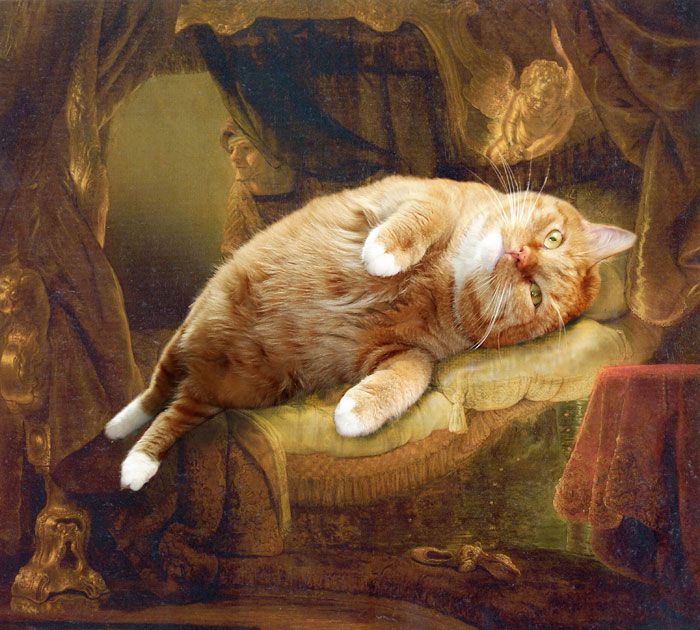 I thought: why not, it will amuse me, and began to think what shall I do. It was useless to put wings on him because he is evidently unable to fly in his physical conditions. So I thought that maybe I can make a photo session with food in the style of Dutch still-life paintings. To imagine how it will look like I decided to photoshop the cat into some painting (I used Photoshop for sketches of the sets of my events and costumes) And I don’t know why I photoshopped it into another painting, Danae by Rembrandt. Then I made four more classic paintings, and I sent them to some friends of mine, artists, and gallerists, just to see their reaction. Never before had I seen serious ladies crying to tears and laying down from laughing.

This encouraged me a lot, and I launched the site FatCatArt.com. 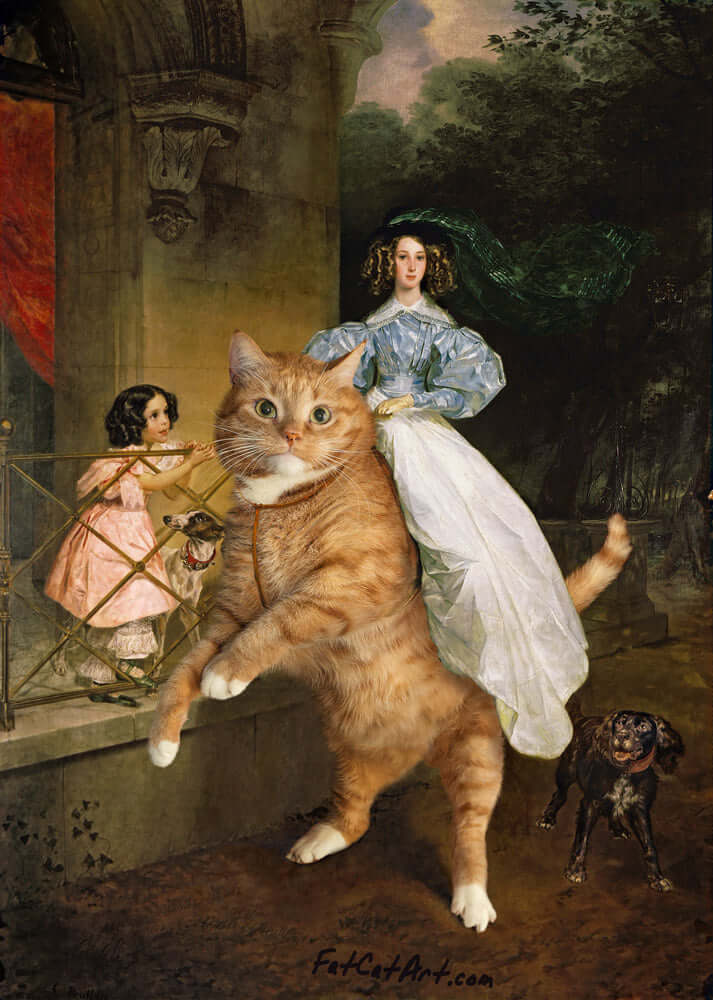 Karl Bryullov, A Rider on the Cat

My other inspiration was the Internet. I dreamt of making an experiment: to create an Internet meme that should be beautiful and clever, this virus should bring some information, some stimulus to know more. People discovering my cat paintings should google originals. Of course, not all of them do that, but a few of them are worth a play. The cat-modified paintings fit ideally to my idea of a clever and beautiful meme. Making this project brought a lot of knowledge for me also, I studied a lot of the styles of old masters, and their techniques, to make paintings look as if they are real paintings made by an old master.

I am very pleased if a museum that has original paintings in its collection, reposts my artworks, like, for example, 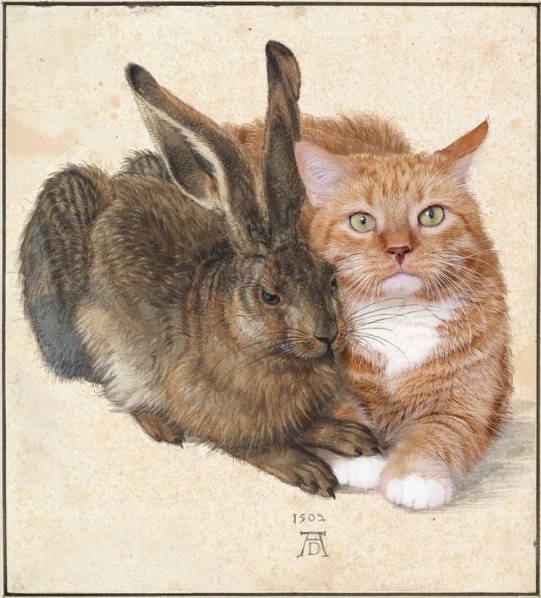 We think Dürer’s hare and this sweetie look quite lovely together, don’t you? – Shared by Albertina Museum on Instagram 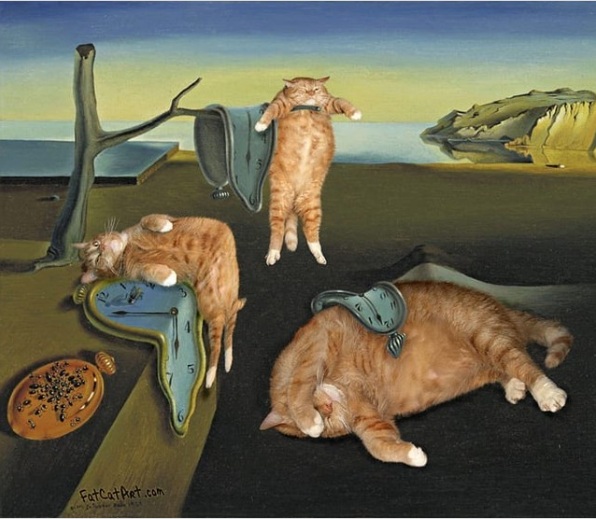 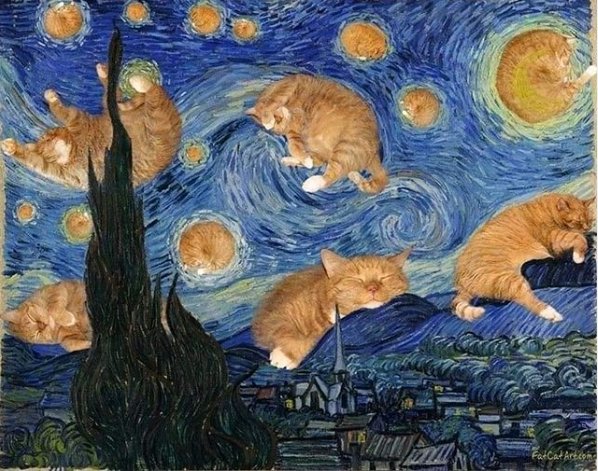 What are some of your favorite works you’ve made?

So hard to tell what is favourite!  I like my «Mona Lisa. True version» I doubt a lot creating it: it’s a challenge, so many artists were remaking Mona. The first was Marcel Duchamp who drew a mustache at Mona Lisa’s cheap postcard and wrote caption L.H.O.O.Q.. That was a century ago, and then L.H.O.O.Q. was sold for $607,500 on 13, May 1999 at Christie’s auction in New York, So many other remakes were made. I had a very strong competition of remakes, from Duchamp to Botero and Banksy. 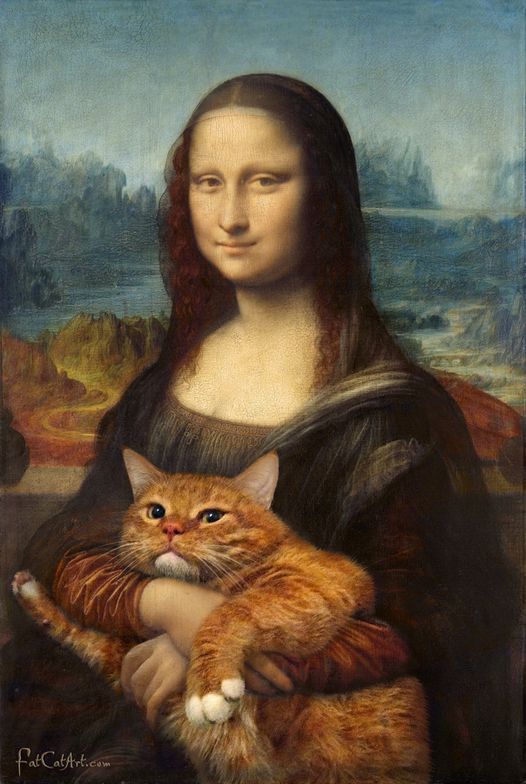 But I made a piece, and I succeed to the level that many people told me that Mona Lisa became better with the cat. They have such a feeling because now the scene became understandable, alive: a girl with the cat posing to a photographer on the balcony, the girl wants to make a parade face, but the cat is bored and wants to escape, everybody saw this scene in his life, it is so vivid!

Mysterious Joconde from the 16 century became a modern city girl, who is fond of cats, the internet, and selfies, and now we have absolutely different portraits. 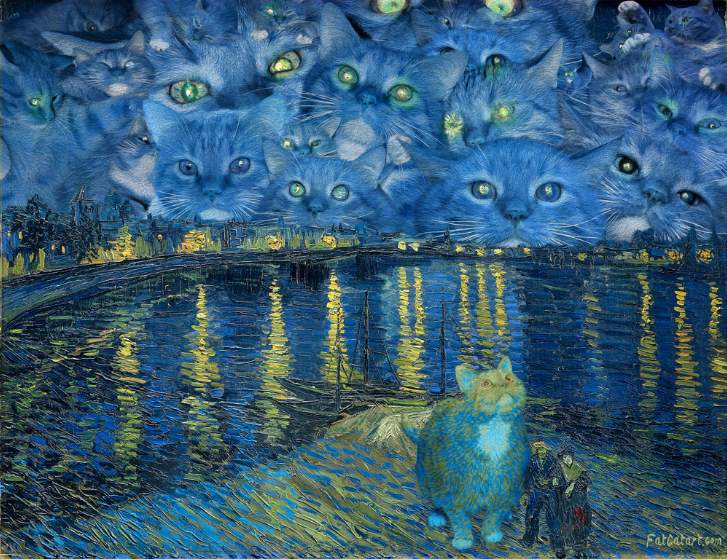 Zarathustra the Cat revealed a secret about Mona Lisa’s smile, the most famous secret in the history of art! I like to remake Van Gogh’s paintings, especially his Starry Nights and Furry Starry Night over the Rhone. I think I showed there is a unity of macrocosm and microcosm.

And I like to make cat additions to Edward Hopper’s works, I think these huge empty spaces at his works are reserved for cats. 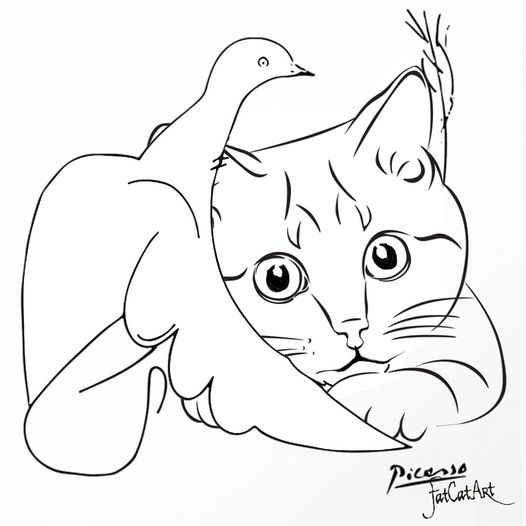 Will your new kitty, Tyger Blake, be featured in your art?

Yes, he already made a debut in Pablo Picasso, Face of Peace with a Kitten.

He came into this world in a time of trouble and is eager to make this world better. Another art with him follows very soon, I hope next week. 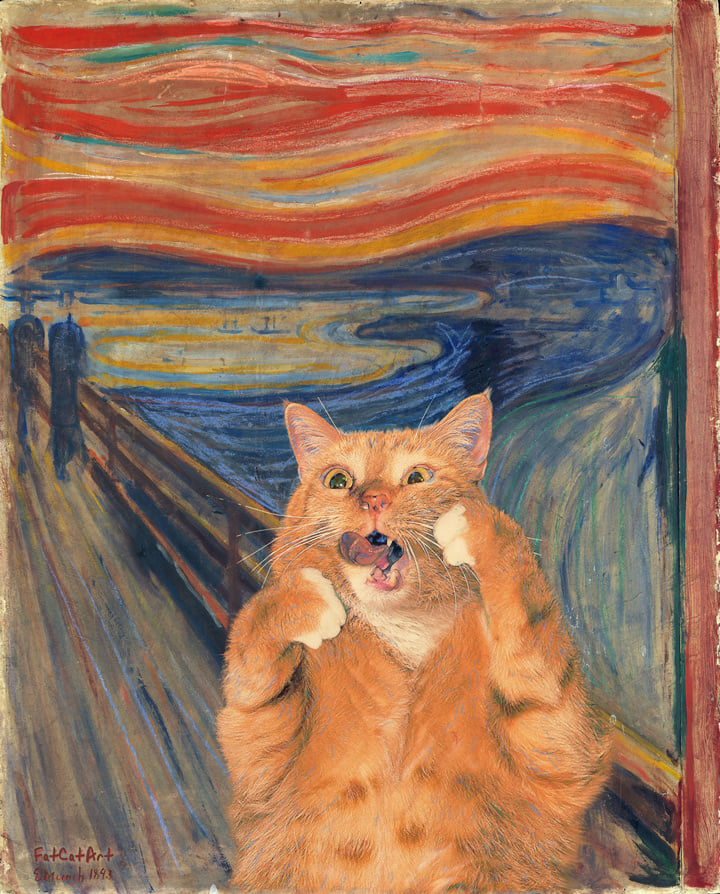 Edvard Munch, The Scream, or The Cream of the Scream 🙀

Zarathustra was a natural-born artist and he knew he was making art, and he was always very friendly to photographers, he knew who is a photographer and began to flatter these people, amazing, how he knew!

He had a special place for work as a model, in my apartment there is a podium covered by a big carpet, it looks like a stage. When Zarathustra wanted to pose he showed me that I should go to this place, then lay down on this carpet, and began to make very funny poses with a very serious face. He had rich mimics and could make different very expressive faces.

Look at this, how Zarathustra re-enacted Gloria Swenson in Sunset Boulevard, pay attention to 0:27-0:35:

He is very convincing saying “I am ready for my close-up!”

So I am very serious when I say that he is my co-author. We made not only paintings but also a book together: “Fat Cat Art: Famous Masterpieces Improved by a Ginger Cat with Attitude” 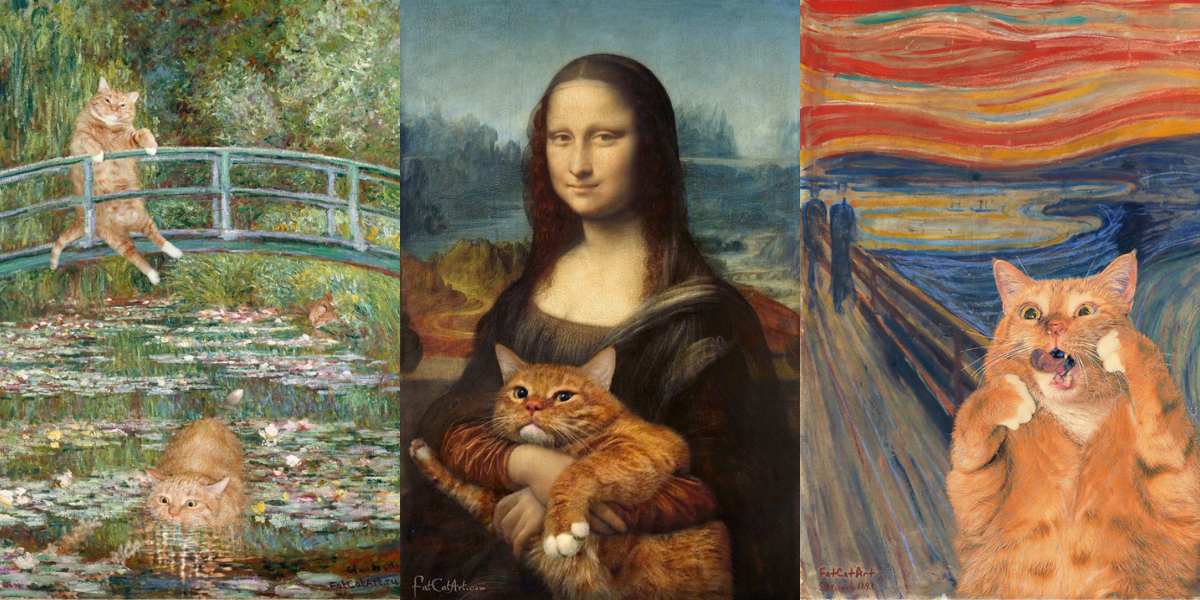 On the cover of the book, we both are quoted as authors: Svetlana Petrova & Zarathustra the Cat. I think he is the first cat-book author.

He is also maybe the unique cat who became a contemporary artist by himself. As an artist, he worked in the field of appropriation art, performance, and institutional critics.

And he was my personal friend, we understood each other so well. I miss him immensely.

And he was my muse (or Mews)

And, as I explained before, I felt a connection to my late mother via him. I think my mother would love so much what we have done together with him! 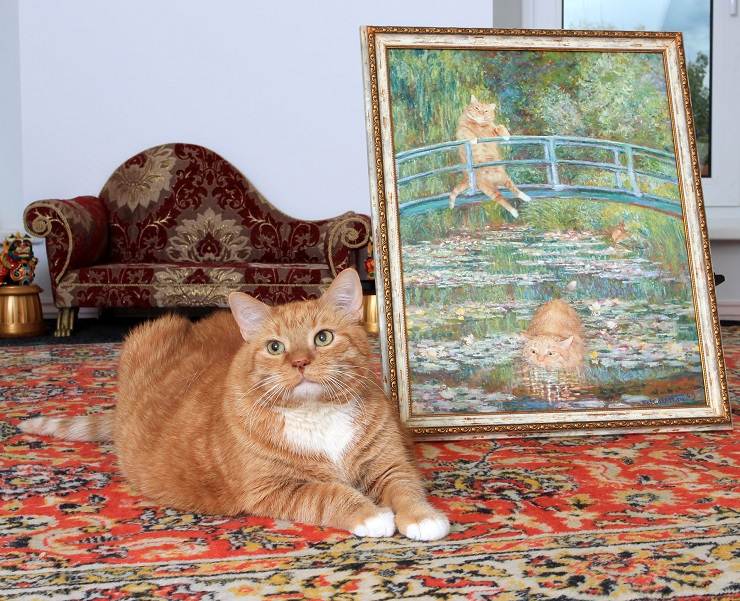 Zarathustra the Cat with Claude Monet’s “Bathing in the pond of water lilies”, thinking about art and a little bit of shrimpies ❤️️

In my childhood, me and my mother, we went to the Hermitage museum every weekend.

And then Zarathustra the Cat came into my life like he was sent by my mother to take care of me in her absence and to bring me again to the museum.

Making of FatCatArt project brought a lot of knowledge for me. I studied the art of old masters, their technique, history of art, and contemporary art. And all this because of Zarathustra. 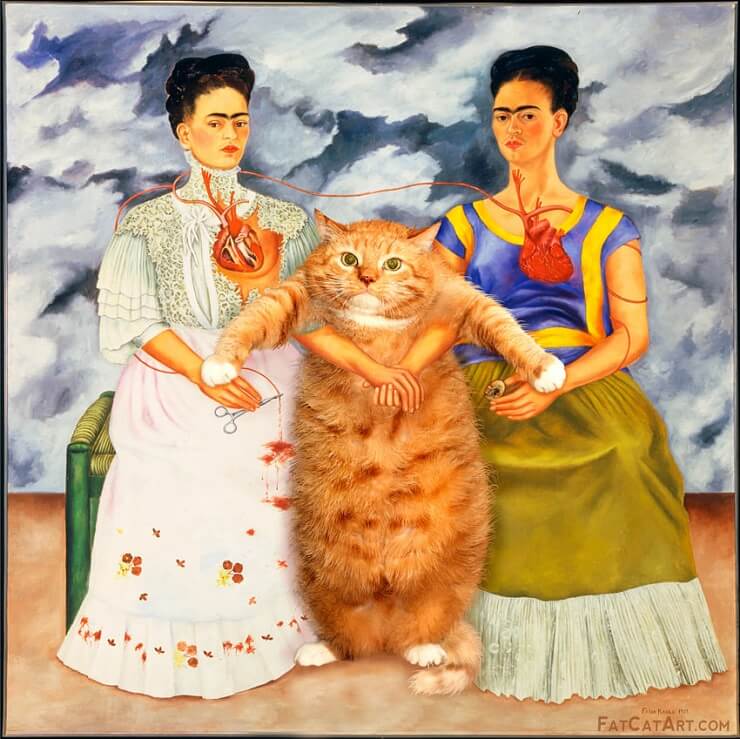 He left me many paintings and even videos to finish, and I have to develop his legacy. I have thousands of his photos and video shots on my computer. He traveled in art history for centuries, and he will continue his journey in the digital world.

Zarathustra will return in new paintings, just give him a little bit of time.

Meanwhile, I found him in the depth of the Milky Way galaxy. 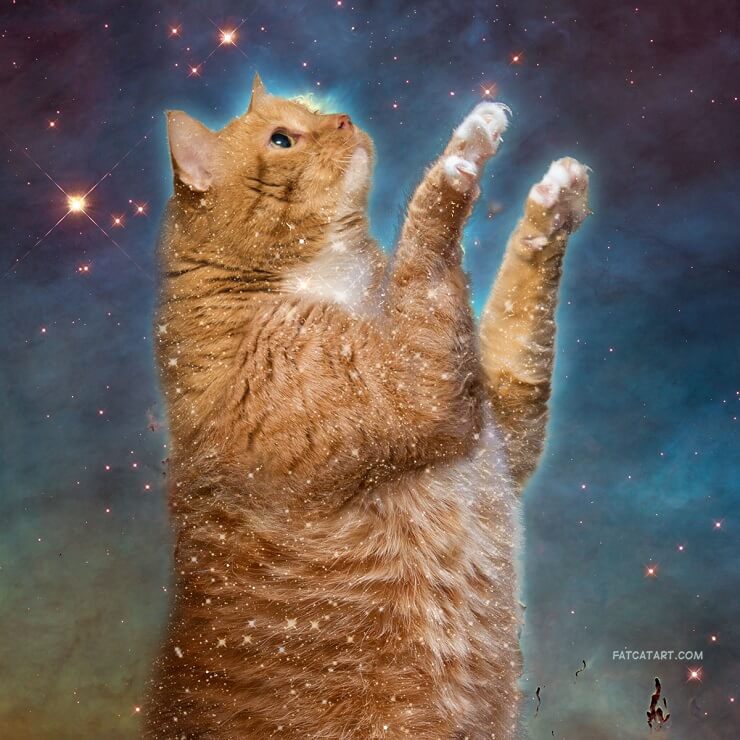 The Celestial Cat in the Pillars of Creation, in visible light

We’d like to thank Svetlana for allowing us to share Zarathustra’s story and for taking the time to answer our questions. For more of her work, be sure to check out her website, and you can also purchase her book on Amazon. Also, be sure to follow her on Facebook and Instagram to see her latest impressive creations. Zarathustra’s legacy will continue to live on in her work and in the hearts of many, for he truly was one very special cat.