Four year olds generally have no concept of animal cruelty, but at four, watching Animal Planet with my dad, I found out that I did. A gray kitten was trapped helplessly in a pipe, and I watched with tears in my eyes and a broken heart as rescuers pulled the kitten free, wondering, even in my young age, how anybody could be so cruel to a life so innocent and helpless.

At 15, I began volunteering with Happy Homes Animal Rescue. For two hours every week, I devoted my time to cats rescued from kill shelters anywhere from Manhattan to Kuwait. I gave my entire heart to these cats, especially the ones so horrifically traumatized that they would vomit from sheer anxiety. One of these cats is Queen.

Queen is a beautiful Snowshoe cat with brilliant blue eyes and a black triangle on her nose like a scarecrow. When I met her, she was suffering from severe postpartum depression after having her kittens ripped away from her to be sold. When Queen was no longer useful to her breeders, she was abandoned on the street and picked up by a pound. Horrifically enough, she was set to be euthanized.

It broke my heart all over again to learn that a cat once valued for her beauty was discarded like trash. The first time I touched her, she was hiding under her own body, at the time not much more than skin and bones, and trembling in fear. Human hands had only showed her cruelty, and I was trying so desperately to show her that we’re not all so evil.

At that point, Queen had been with Happy Homes for ten months. She barely ate out of distrust for any human, and her postpartum depression had seen no improvement, despite staff efforts. I was so desperate for her to get used to me that I would leave my sweatshirt on top of her bed so that she would become used to my scent.

After two months, Queen was scheduled to return to the foster home, rather than stay in the adoption center where I volunteered. I couldn’t let her go, so I took a chance and brought Queen home, where she is now an energetic, affectionate cat who has finally put some weight on, after catering to her secret love of Boar’s Head turkey.

Queens’ story of overcoming animal abuse has a happy ending, but too many others don’t. Some of the cats I met in my 150+ hours of volunteering were treated so heartlessly that they would never be able to trust again.

I know I can’t change the way people treat animals, but my time spent with Happy Homes is a start. I showed these horrifically abused cats that humanity has a good side. That is enough to heal my heart, the same heart that broke as a four year old girl, learning that not everyone believes that animal lives deserve to be treated as lives. 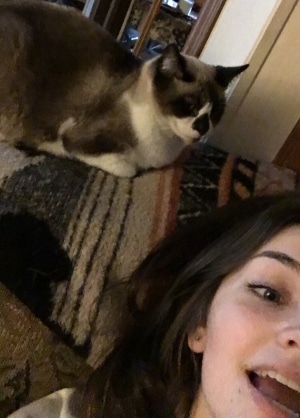 My name is Erin Layton, and I am a sophomore at Stockton University in New Jersey. I have spent over 150 hours to date volunteering with Happy Homes Animal Rescue, based in Old Bridge, New Jersey. My love for animals started with my very own cats, orange tabby kittens we rescued when I was just four years old. Today, they are fully grown Garfield looking things who meow at me for treats instead of lasagna. I have traveled around the United States, appreciating this world for what it is, and I hope to someday make it a better place with my career in criminal justice.