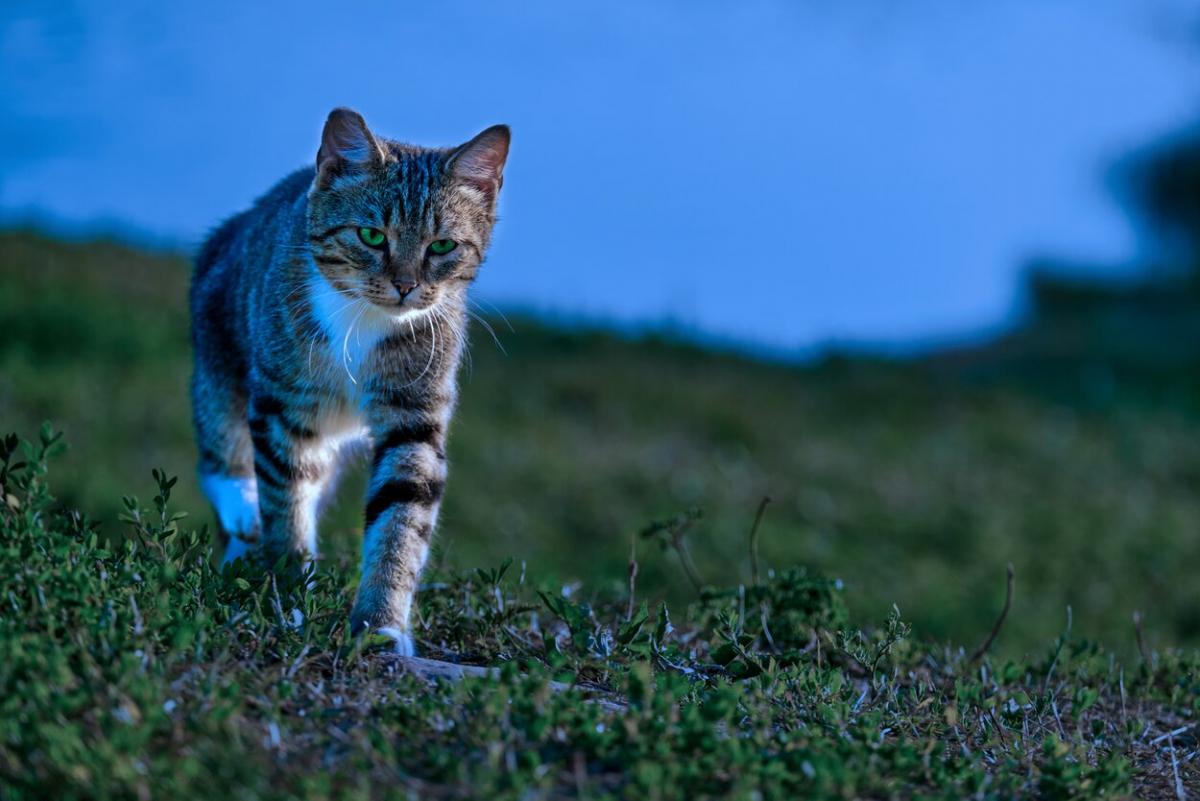 A question cat lovers across the world have often wondered: Can cats sleepwalk? The short answer to this question is no! Cat sleeping habits can often seem pretty strange from a human perspective. When we are tucked up in our beds, it’s very common for us to hear and see our cats prowling around the house.

Cats and other animals can dream and during certain stages of sleep move their limbs with little muscle twitches and/or vocalize.

Cats do not sleepwalk; sleepwalking is a unique behavioral disorder that only occurs in humans.

The only time sleepwalking has been documented in cats was during an experiment that was studying cats with brain damage.

You could be mistaken for thinking this is sleeping walking. Cat behavior can be difficult to understand but we know that cats aren’t actually capable of sleepwalking. Read on to find out why.

How Much Do Cats Sleep? 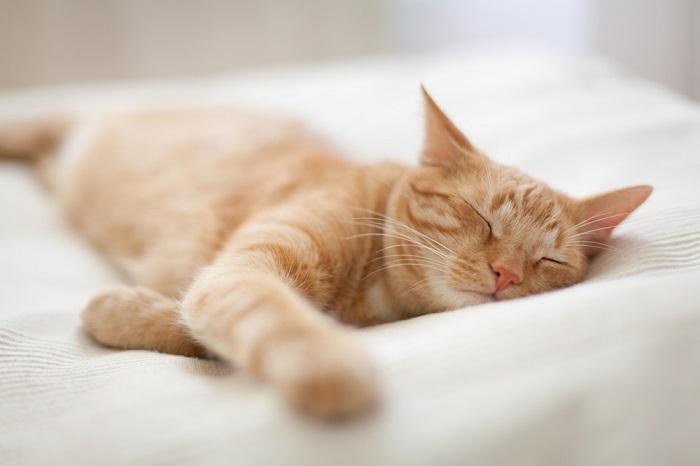 Though most people think cats are nocturnal they are in fact crepuscular—most active at dawn and dusk.

Sleep is very important for cats. They spend a large proportion of their time fast asleep and have a reputation for being exceptional sleepers. You could argue that cats are the kings and queens of self-care as they prioritize sleep so well!

Younger cats generally tend to be more active and expend more energy, therefore need more sleep than adult cats. Kittens will have a crazy period where they go wild, exhausting themselves playing then suddenly stop and fall into a deep sleep.

Adult cats, on the other hand, might spend their waking hours doing a minimal activity, saving energy rather than burning it up, so they often don’t need as much rest as the younger cats. Then, however, it goes full circle. Older cats, classed as geriatric cats, will sleep for most of the day as their sleep requirements are increased again due to their age.

On average, cats sleep about 15 hours per day. Where, when, and how long your cat sleeps does depend on the individual. Some cats need more sleep than others. Some domesticated cats, especially older cats, manage to sleep up to 20 hours a day! So what exactly happens during those lengthy slumbers?

Also Read: 11 Tips To Train Your Cat To Sleep All Night 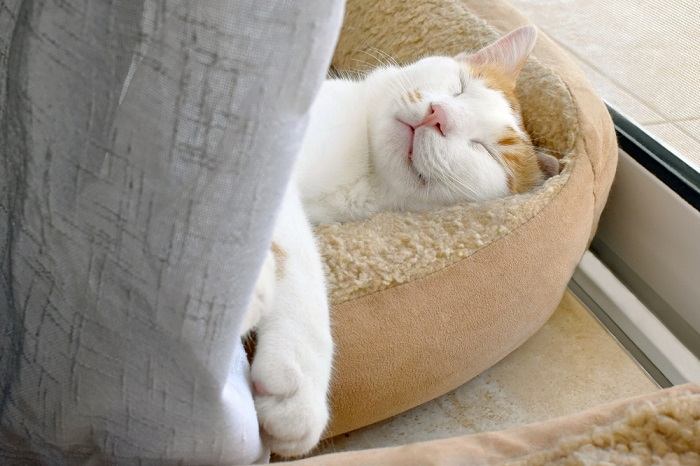 Cats experience different stages of sleep the same as humans do. These stages are classed as REM sleep and non-REM sleep. REM stands for rapid eye movement sleep. When your cat is experiencing REM sleep, this is the stage of their sleep cycle that they dream in.

It is a deep state of sleep where your cat’s body is very relaxed and large muscles are unable to move. The name rapid eye movement might make you think of times you have seen your cat twitching or their eyelids flickering and your cat vocalizing in their sleep.

This is because although the big muscles are “switched off” at this time, some movement is still allowed and they react to their dreams as they are happening. In the REM stage of sleep, your cat could be dreaming about a successful hunting mission or what happened in their day.

As cats are so well adapted to be predators, they are alert for a large proportion of the day, even when they are asleep! They can’t afford to be in a deep sleep for a long period of time. They actually only spend 25% of their time asleep in a deep sleep. The other 75% is spent having a light snooze where they can wake up and react to a stimulus at any given moment.

Also Read: Why Do Cats Curl Into Balls When Sleeping? A Veterinarian Explains 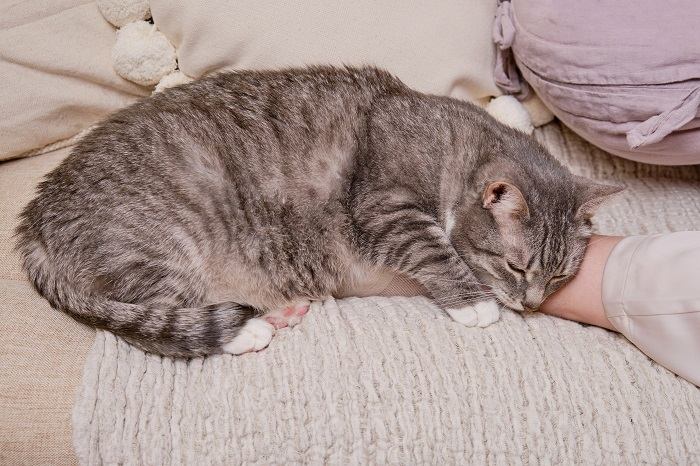 Like people, cats dream, both pleasant dreams and nightmares.

Interestingly, cats dream just like humans do. Their hippocampus is a part of their brain that is thought to contribute to dreaming. Your cat’s hippocampus is wired very similarly to other mammals. The pattern of electrical activity recorded during sleep from cats and humans is the same too.

This means that it’s likely cats experience the same brain activity that creates dreams the same way we humans do.  We think that cats will dream about some sort of activity or interaction that happened during their waking hours.

This could be something positive or negative, just like humans having pleasant dreams or nightmares. Cats, quite the same as us humans, process events that have happened in the day when they are asleep by dreaming.

A nice dream for a cat will usually involve some sort of happy memory to do with you, being fed their favorite food, or a particularly good belly rub. You might see them purring in their sleep and they will be content and relaxed.

A bad dream might be about something like them being chased by another cat or a traumatic event such as being away from you for an extended period. When cats are having a bad dream they will sometimes cry out or twitch and jerk about as if they are trying to get away from something.

Although you might want to wake your cat to comfort them, it’s best to leave them as they might be in a heightened state of alert and if you touch or disturb them, they might bite or attack you.

Also Read: Why Does My Cat Sleep On My Head? 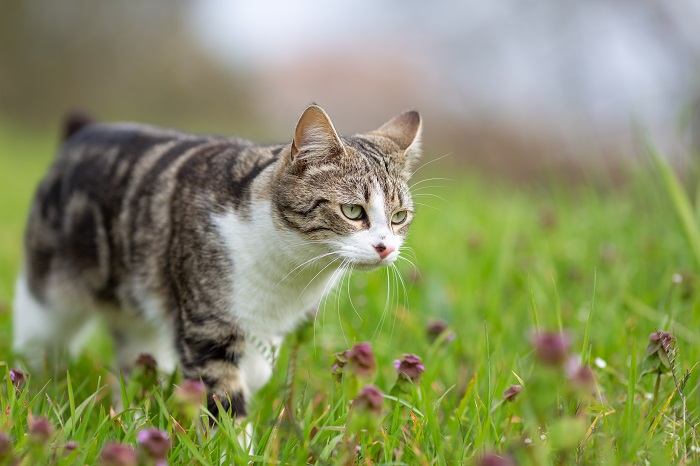 Though humans possess the ability to sleepwalk, cats do not.

Dreaming and sleepwalking are completely different things. Cat brains are very similar to human brains when it comes to processing memories and dreaming. However, there is a big difference when it comes to the ability to sleepwalk. Sleepwalking is also called somnambulism.

It involves activities such as walking, that happen usually during the first few hours of sleep and during abrupt but limited arousals from non-rapid eye movement (NREM) slow-wave sleep. In human studies, the cause of sleepwalking is thought to be to do with a decrease in blood flow to specific areas of the brain.

The reason we are usually still when we are sleeping is due to a neurotransmitter which is called GABA, or gamma-aminobutyric acid.

GABA is an amino acid that functions as the primary inhibitory neurotransmitter for the central nervous system. It functions to reduce neuronal excitability by inhibiting nerve transmission. This transmitter gets released when you or your cat enter the REM state of sleep.

This occurs to stop muscle movements while a cat or human is dreaming. Sometimes when there are insufficient levels of GABA in the body, this can cause jerking or flexing movements. In humans, it can also cause sleepwalking, but not in cats.

Cats may twitch and jerk during their sleep, but they do not possess the ability to sleepwalk. In fact, the only time sleepwalking has been observed in cats is when the cats had suffered a brain injury. A French university professor named Dr. Michel Jouvet carried out various experiments on cats.

He found that cats with lesions located near the locus coeruleus (a part of the brainstem) acted completely normally when they were awake, but when they were asleep and in the REM part of the sleep cycle they acted very differently. They started to move about as if they were acting out their dreams.

A respected veterinary neurologist named Adrian Morrison then wrote a review of Dr. Michel Jouvet’s research in the 1990s. He said when cats are in REM sleep, they sometimes move their heads as if mimicking stalking prey or watching something. This suggests that cats dream about activities from their day.

Also Read: Why Does My Cat Lay And Sleep Between My Legs? 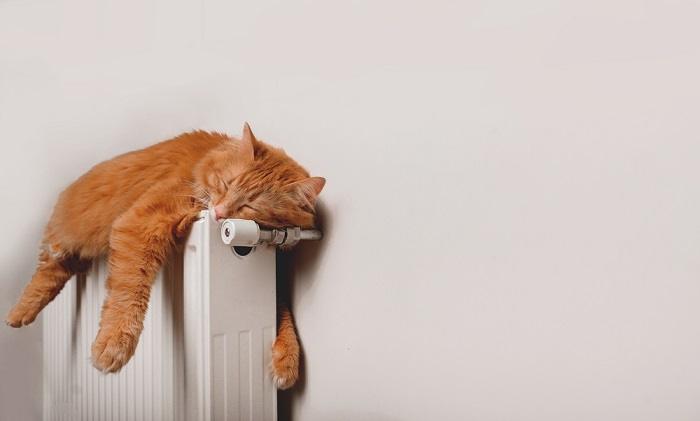 If you ever watch your cat sleeping and notice them twitching or jerking, they are very likely dreaming.

Cats can and do dream. We know this as their brains sort and generate memories via the same method that humans do. Cats definitely do move about when they are sleeping, and lots of owners see this regularly with their cats. Some owners think that these body movements are signs of sleepwalking. Cats do not sleepwalk. It would appear that sleepwalking is a unique behavioral disorder that only occurs in humans.

The only time sleepwalking has been documented in cats was in a laboratory experiment, where unfortunately the cats had brain damage. You are very unlikely to find your cat sleepwalking around your house.

If you are concerned about your cat’s behavior, or you think that they don’t seem fully aware or awake when they are moving about, it is best to contact your veterinarian to arrange a full health check. There are other illnesses and disorders that can affect your cat’s sleep and wake cycles and habits, so it is important to rule these out.

Animals can dream and react to their dreams when they are in certain stages of sleep by moving their limbs with little muscle twitches. They do also sometimes bark or meow or vocalize. However, according to research, animals are unable to sleepwalk. The movements we see are random small movements. They don't get up and walk about unless there is something wrong with their brain.

Can cats dream and have nightmares?

Yes, we think that cats do dream and have good dreams and bad dreams just as humans do. The part of the brain responsible for organizing and contributing to dreaming is called the hippocampus. This section of the brain has been found to be functioning the same way in all mammals, therefore it's safe to assume that cats dream and unfortunately experience nightmares too.

Why do cats cry while sleeping?

Some cats unfortunately experience bad dreams or nightmares. This might cause them to cry out or meow sadly when they are dreaming. If your cat is crying in their sleep when they wake up you can comfort them by talking softly to them and soothing them and letting them know they are in a safe familiar place.

Should I wake up my cat when he's dreaming?

In this case, it's wise to let sleeping cats lie. Even if you think they are having a nightmare, you should not wake your cat up. If you disturb them or startle them, they might wake up and bite or scratch you out of fright. They won't mean it, but it will still hurt!

Siegel, M. (2004) The Neurotransmitters of Sleep, The Journal of clinical psychiatry https://www.ncbi.nlm.nih.gov/pmc/articles/PMC8761080/

All About Cats
How Intelligent Are Cats? Science Has an Answer
JOIN THE FAMILY