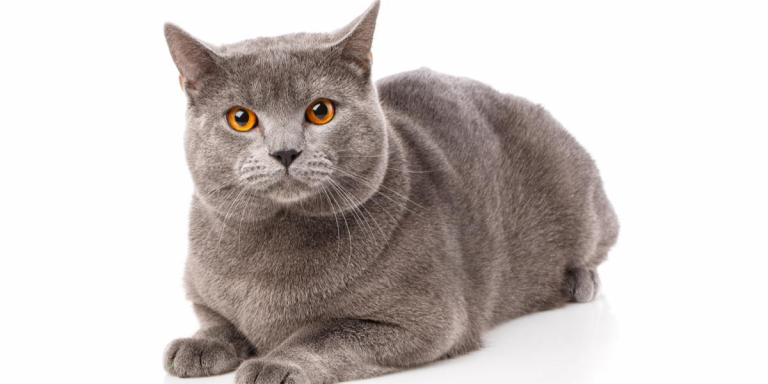 Temperament
? The breed’s dominant personality traits. While each individual has a unique personality, breed-specific genetics affect qualities like sociability, playfulness, and intelligence.
Playful, friendly, intelligent, sweet
Origin
? Where this breed was first established.
France, Syria
Other Names
? In addition to their official names, most breeds earn a few nicknames.
Hospital cat
Group
? Breeds are grouped by their size and coat type.
Large shorthair
Height
? The typical adult height among individuals of this breed. Height is measured from the top of the head to the bottom of the front paws.
8"-11"
Body Length
? The typical adult body length among individuals of this breed. A cat’s length is measured from the base of the tail to the tip of the nose.
15"-18"
Weight
? The typical adult weight range of this cat breed.
11-18 pounds
Life Expectancy
? The average lifespan of the breed. While life expectancy is fairly consistent across all cat breeds, some breeds tend to live shorter or longer than others.
11-15 years
Price
? The average price.
$500-$2,500
Affection Level
? Breeds with a high affection level want to give and receive a lot of attention, while less-affectionate breeds are not as interested in petting and snuggles.
0 100%
90%
Activity Level
? Breeds with high activity levels will engage more in active play and demand more space and attention.
0 100%
50%
Pet-Friendly
? How well the breed tends to get along with cats, dogs, and other pets.
0 100%
80%
Kid-Friendly
? Breeds with a higher rating in this area tend to be gentle and patient, while lower-rated breeds may feel uncomfortable with children.
0 100%
80%
Sociability
? Breeds with a higher sociability rating will want to spend time with you all day, while less-sociable breeds seldom seek out human interaction.
0 100%
80%
Intelligence
? Breeds with higher intelligence ratings are more curious, investigative, and easy to train. Less-intelligent breeds are less trainable but often laid-back and easygoing.
0 100%
80%
Playfulness
? Breeds that score higher in this area have strong hunting instincts that make them great playtime companions.
0 100%
70%
Independence
? Breeds that score higher in this area are able to spend hours alone, while less-independent breeds require plenty of attention.
0 100%
50%
Vocality
? A higher rating in this area indicates a breed prone to plenty of meowing and other vocalizations, while less-vocal breeds are happy to stay quiet.
0 100%
30%
Grooming
? Breeds with higher grooming scores require more maintenance like brushing and bathing, while lower-scored breeds are virtually maintenance-free.
0 100%
50%

About the Chartreux Cat

Exquisite blue coats, intelligent personalities, and smiling faces make the Chartreux stand out. This old French cat breed was nearly wiped out during the first and second world wars and remains rare today.

Chartreux cats bond with their families but tend to prefer one individual over everyone else. They have a tendency to follow their favorite person from room to room, sometimes mewing or chirping softly. If you're looking for a cat with a reputation for quiet vocalizations, the Chartreux may be ideal; in fact, some Chartreux cats are mute. 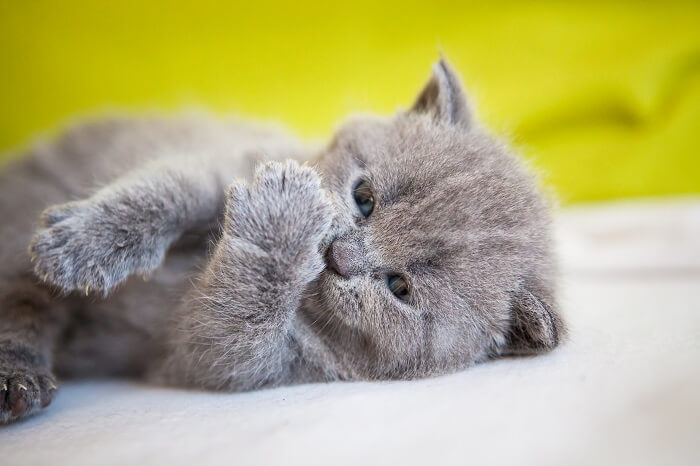 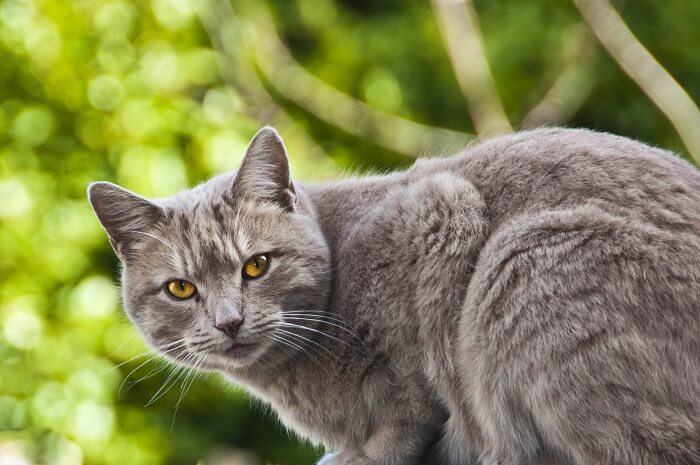 The Chartreux cat requires no special diet; however, we recommend feeding a high-quality cat food with omega-3 fatty acids to promote skin and coat health.

While the Chartreux cat enjoys playing with toys and climbing cat trees, the breed isn't terribly active as a rule. You'll want to encourage play to prevent obesity, but Chartreux cats aren't prone to hyperactivity when playtime is missed.

Chartreux cats are generally very healthy and enjoy a lifespan that extends an average of 12 to 15 years. A few known health issues surface in some individuals, including patellar luxation, bladder stones, and polycystic kidney disease.

Although legend states that today's Chartreux cats are descendants of cats that were originally imported to France by Carthusian monks, the monastic order states that no archives hold records of historic use of cats resembling the Chartreux breed.

A separate legend states that Chartreux cats are descended from feral mountain cats that originated in Syria and that were brought to France in the 13th century by Crusaders. French naturalist Buffon officially describes the breed in the 18th century. The cats are renowned as excellent hunters and were highly prized by farmers for their rat-catching prowess.

Chartreux cats were nearly wiped out during the first world war. Wild populations disappeared by the end of the second world war. At the same time, European breeders worked together to prevent all-out extinction, crossbreeding with Persian, British Shorthair, and Russian Blue cats that strengthened the breed.

Chartreux cats made their way to the United States in 1971. The breed was advanced to championship status after being accepted by the Cat Fanciers Association in 1987. All cat fancy organizations recognize the Chartreux cat breed. 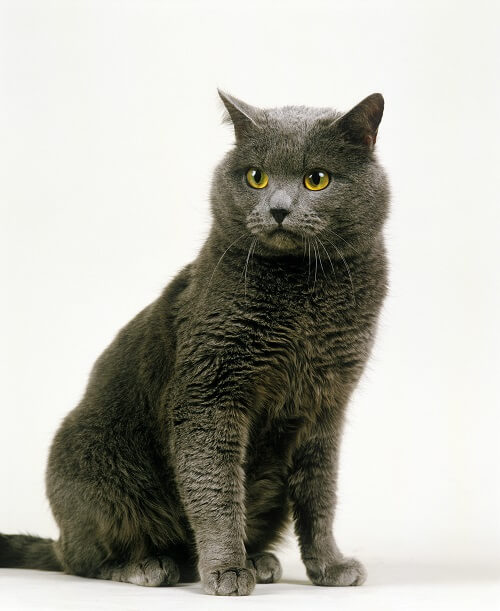 In France, pedigreed Chartreux cats are always given names that encode their birth year. All Chartreux cats born in the same year have official names that begin with the same letter. Code letters change annually, and rotate through the alphabet. The letters K, Q, W, X, Y, and Z are not used.

Even though the first documented mention of Chartreux cats occurred in the 18th century, their first mention occurred in 1558 in a poem by Joachim du Bellay.

The average Chartreux cat reaches adulthood by age 2; in comparison, most domesticated cats are considered to be adults by the end of their first year. 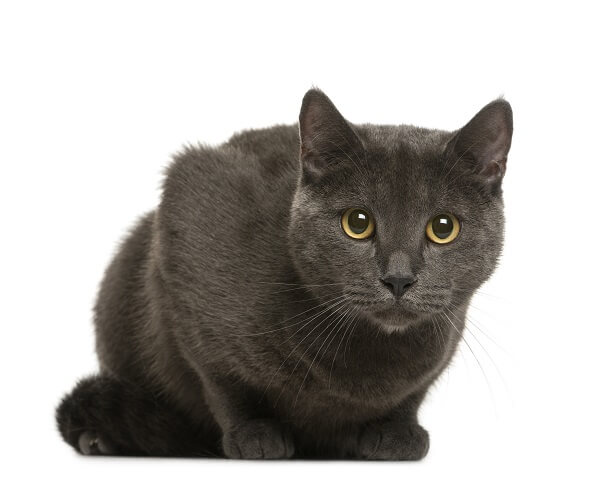 The eyes are brilliant copper to orange colored, creating a stunning contrast with the coat.

The Chartreux cat has legs that appear somewhat short and thin in comparison to the body.

The tail is thick and muscular, displaying very little taper toward the end. It is of average length.

Chartreux cats are of medium to large size with cobby, muscular bodies. The neck and chest are broad and muscular. The Chartreux cat normally has a body that is longer than it is tall. Adult Chartreux cats weigh up to 16 pounds.

With rounded heads, muscular jaws, and well-developed muzzles, Chartreux cats have prominent whisker pads that are positioned to create the illusion of a smile.

A Chartreux cat should have well-proportioned ears that are wider at the base and rounded at the tips.

The Chartreux cat has a soft, thick double coat with a somewhat woolly texture.

How much does a Chartreux cat cost?

How big do Chartreux cats get?

Chartreux cats tend to be large in size. A fully grown Chartreux cat might weigh between 11-18 pounds or more and range in height anywhere from about 8"-11" inches tall.

How long do Chartreux cats live?

The Average lifespan for Chartreux is 11-15 years.

Chartreux are short-haired cats. Therefore, they do not shed as much as long-haired cat breeds.