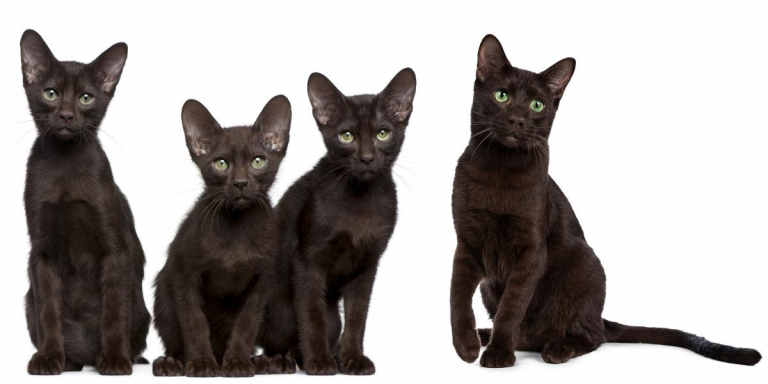 Temperament
? The breed’s dominant personality traits. While each individual has a unique personality, breed-specific genetics affect qualities like sociability, playfulness, and intelligence.
Affectionate, people-oriented, alert, inquisitive
Origin
? Where this breed was first established.
United Kingdom
Other Names
? In addition to their official names, most breeds earn a few nicknames.
Chocolate Delight, Chestnut Foreign Shorthair, Suffolk, HB, Chestnut Brown, Swiss Mountain Cat, Havana
Group
? Breeds are grouped by their size and coat type.
Medium-sized short-haired
Height
? The typical adult height among individuals of this breed. Height is measured from the top of the head to the bottom of the front paws.
12"-14"
Body Length
? The typical adult body length among individuals of this breed. A cat’s length is measured from the base of the tail to the tip of the nose.
12"-16"
Weight
? The typical adult weight range of this cat breed.
6-10 pounds
Life Expectancy
? The average lifespan of the breed. While life expectancy is fairly consistent across all cat breeds, some breeds tend to live shorter or longer than others.
12-15 years
Price
? The average price.
$500-$1,500
Affection Level
? Breeds with a high affection level want to give and receive a lot of attention, while less-affectionate breeds are not as interested in petting and snuggles.
0 100%
100%
Activity Level
? Breeds with high activity levels will engage more in active play and demand more space and attention.
0 100%
70%
Pet-Friendly
? How well the breed tends to get along with cats, dogs, and other pets.
0 100%
100%
Kid-Friendly
? Breeds with a higher rating in this area tend to be gentle and patient, while lower-rated breeds may feel uncomfortable with children.
0 100%
100%
Sociability
? Breeds with a higher sociability rating will want to spend time with you all day, while less-sociable breeds seldom seek out human interaction.
0 100%
100%
Intelligence
? Breeds with higher intelligence ratings are more curious, investigative, and easy to train. Less-intelligent breeds are less trainable but often laid-back and easygoing.
0 100%
100%
Playfulness
? Breeds that score higher in this area have strong hunting instincts that make them great playtime companions.
0 100%
80%
Independence
? Breeds that score higher in this area are able to spend hours alone, while less-independent breeds require plenty of attention.
0 100%
10%
Vocality
? A higher rating in this area indicates a breed prone to plenty of meowing and other vocalizations, while less-vocal breeds are happy to stay quiet.
0 100%
100%
Grooming
? Breeds with higher grooming scores require more maintenance like brushing and bathing, while lower-scored breeds are virtually maintenance-free.
0 100%
10%

About the Havana Brown Cat

Friendly, intelligent, and playful, Havana Brown cats are excellent all-around companions for families of every kind. They are fond of children and their capable of forming lifelong bonds with other pets. All of these wonderful traits have earned the Havana Brown the nickname "Chocolate Delight." These kitties are absolutely exquisite, with gorgeous chocolate coats and vibrant green eyes. No other cat looks quite like a Havana Brown.

If you are hoping for an attentive pet, you might want to consider a Havana! These cats break through feline stereotypes that mention aloof, independent personalities; in fact, The Havana Brown is a charmer, thriving on human interaction. These kitties are not happy without their favorite humans by their sides. 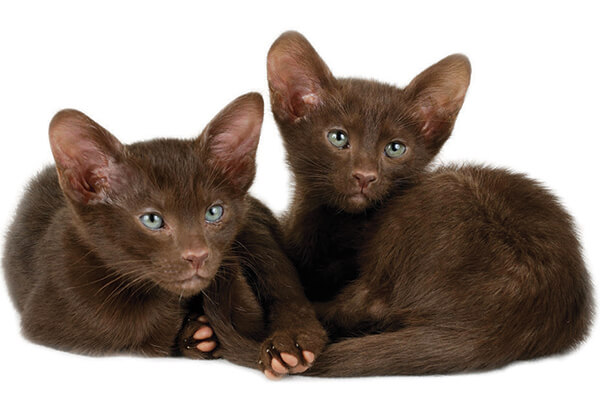 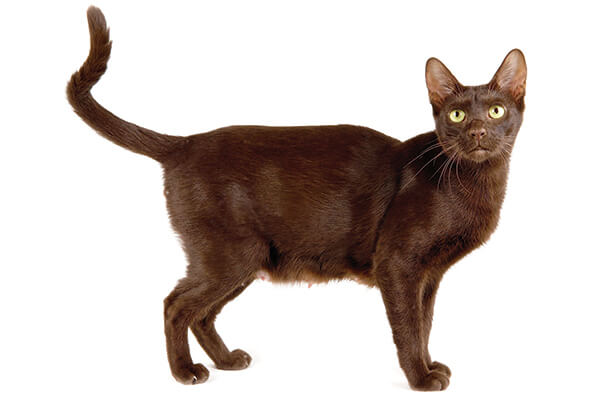 Havana Brown cats have no special nutritional needs. At the same time, it is vital to provide a high- quality diet to support well-being. If you are not feeding fresh food, ensure that real meat or fish is the number one ingredient in the commercial diet you choose.

Thanks to their short coats, Havana Brown cats require no intensive grooming. You can keep your cat looking their best by removing loose hair with a soft brush once or twice per week. You might also want to polish your cat's coat with a chamois or silk scarf after brushing. This will really bring out the shine!

You can help your cat stay healthy by teaching them to allow you to brush their teeth. Last but not least, you might consider keeping their nails trimmed. Your furniture and clothing will thank you.

Havana Brown cats are playful by nature. Not only are they fond of showing off their athletic prowess by performing acrobatic leaps and high jumps, they appreciate rousing games of fetch and might bring you a favorite toy to encourage you to join in the fun.

Treat your cat to plenty of toys and be sure that they have items to keep them engaged when you can't be there to play. Puzzle games, a tall cat tree, multiple scratching posts, and a window seat with a view of a birdfeeder are some of the things that will help keep your Havana Brown cat entertained so they are less likely to get into trouble while you're away.

Havana Brown cats are generally healthy, but those familiar with the breed have identified some issues that tend to occur at a higher than average rate.

Some Havana Brown kittens are born with hemophilia, which prevents blood from clotting properly. This isn’t terribly common however it does underscore the importance of choosing a reputable breeder.

Upper respiratory infections and urinary tract disorders can happen to any cat but some Havana’s seem to be a bit more prone to these problems than others. Your vet can help you navigate treatment options if your pet develops these or any other condition.

Even though solid brown cats are mentioned in the Tamra Maew Cat-Book Poems, an ancient manuscript that dates all the way back to 1350 c.e. when Siam was founded, the Havana Brown cat as we know it today is a fairly new breed. Those original ancient brown cats weren't just beautiful companions, they were believed to offer protection from evil. As they were considered to be of such great value, a handful of self brown cats were brought to England from Siam at the end of the 19th century. They were described as being "Siamese, with coats of burnished chestnut, and greeny-blue eyes.”

Not all of these early imports were genetically identical to today's Havana Brown cats. Instead, they were probably Burmese, Tonkinese, and chocolate point Siamese. Some may have been the result of pairings between Siamese and domestic black or blue cats, resulting in cats that were similar to contemporary Havana Browns.

Records show that solid brown cats were shown in Europe during the late 19th and early 20th centuries. In 1888, a brown cat was awarded first prize at an English show, providing more evidence that the cat fanciers of the era appreciated these stunning chocolate colored cats as much as we do today.

By 1930 the British Siamese Cat Club band solid brown cats without blue eyes from competition, announcing that, “The club much regrets it is unable to encourage the breeding of any but blue-eyed Siamese.”

Luckily, this wasn't the end: Solid brown Siamese cats became popular again in the early 1950s. A few English cat breeders came together, studying chocolate gene inheritance and ultimately beginning a breeding program. They successfully paired Siamese cats with domestic shorthairs and a few Russian Blues to produce solid colored kittens the color of a Siamese cat's chocolate points. It's worth noting that these progeny were darker than Burmese kittens, which are a lighter sable color.

In 1952, a solid chocolate kitten named Elmtower Bronze Idol was produced through the pairing of a seal point Siamese and a solid black cat, both known to carry the chocolate gene. This kitten, nicknamed Bronze Idol, carried the foundation genetics for today's Havana Brown cats. The breed was accepted by the Governing Council of the Cat Fancy in 1958, but was named Chestnut Brown Foreign.

The Havana Brown cat gene pool was closed out crossing in 1974 and by the early 1990s, the breed waseven more difficult to find and breeders were forced to pair closely related cats with one another. The Winn Feline Foundation and Doctor Leslie Lyons, Ph.D. of the Veterinary Genetics Laboratory at University of California, Davis stepped in, helping Havana Brown breeders develop a successful outcross program. In 1998, CFA decided to allow outcrossing to seal point and chocolate point Siamese cats, select Oriental Shorthair cats, and domestic shorthair cats with solid blue and solid black coloring.

Kittens produced by mating registered Havana Brown cats with one of the allowable outcrosses could then be mated back to another Havana Brown. The resulting kittens could be registered and shown as Havana Browns so long as the breed standard was met. 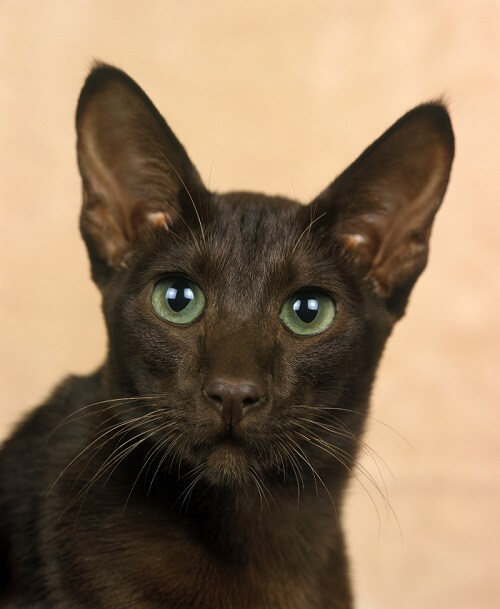 The Havana Brown was nicknamed the “Swiss Mountain Cat” when it first arrived in England.

Even though the breed was developed with vocal Siamese cats playing prominent roles as founding members, Havana Brown cats are fairly quiet. They can be chatty, but their voices are far less demanding than those of their cousins.

Instead of meowing loudly to get their human's attention, Havana Brown cats have a tendency to reach out with their paws, poking or tapping to make their needs known. 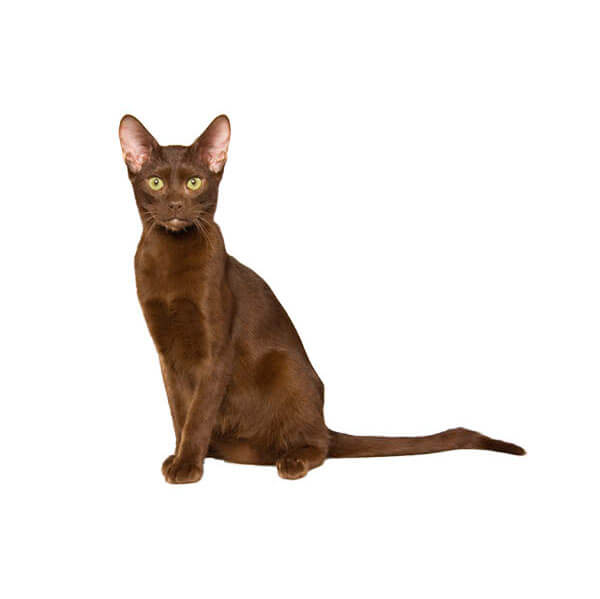 The eyes should be oval-shaped and large. All green colors are acceptable; brighter colors are preferable. Changing eye color is allowed in Havana Brown cats up to one year of age.

The legs should be long and slim, but not fine boned. The feet should be compact, with an oval shape.

The Havana Brown cat has a slender, medium long tail with a tapered end.

The Havana Brown is a medium-sized cat with a muscular body that is neither cobby nor overly long. Havana Brown cats typically feel heavier than they look.

The head should be longer than it is wide, with a strong chin and a muzzle that appears nearly square. There is a definite break behind the whisker pads.

A Havana Brown cat should have large ears with rounded tips. The ears should be wide set and alert with very little hair on the outside and almost nonexistent furnishings.

The coat should be short and smooth, with a very soft texture.

Chocolate-based colors are the only hues allowable. Eumelanistic lilac coloring is allowed by TICA so long as the cat has a chocolate base. Nose leather and paw pad coloring should be deep chocolate to black, complementing the cat's coat color.

How much does a Havana Brown cat cost?

How big do Havana Brown cats get?

Havana Brown cats tend to be medium in size. A fully grown Havana Brown cat might weigh between 6-10 pounds or more and range in height anywhere from about 12"-14" inches tall.

The Average lifespan for Havana Brown is 12-15 years .

Havana Brown are short-haired cats. Therefore, they do not shed as much as long-haired cat breeds.