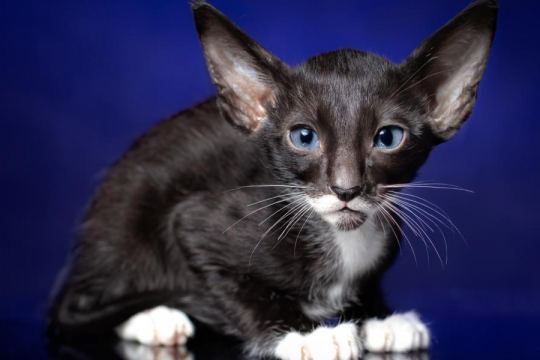 Temperament
? The breed’s dominant personality traits. While each individual has a unique personality, breed-specific genetics affect qualities like sociability, playfulness, and intelligence.
Affectionate, inquisitive, gregarious, athletic
Origin
? Where this breed was first established.
United States
Other Names
? In addition to their official names, most breeds earn a few nicknames.
Foreign type, Oriental Bicolour
Group
? Breeds are grouped by their size and coat type.
Medium-sized Short-haired
Height
? The typical adult height among individuals of this breed. Height is measured from the top of the head to the bottom of the front paws.
8"- 10"
Body Length
? The typical adult body length among individuals of this breed. A cat’s length is measured from the base of the tail to the tip of the nose.
11"-14"
Weight
? The typical adult weight range of this cat breed.
8 - 12 pounds
Life Expectancy
? The average lifespan of the breed. While life expectancy is fairly consistent across all cat breeds, some breeds tend to live shorter or longer than others.
8-12 years
Price
? The average price.
$400-$2000
Affection Level
? Breeds with a high affection level want to give and receive a lot of attention, while less-affectionate breeds are not as interested in petting and snuggles.
0 100%
80%
Activity Level
? Breeds with high activity levels will engage more in active play and demand more space and attention.
0 100%
80%
Pet-Friendly
? How well the breed tends to get along with cats, dogs, and other pets.
0 100%
60%
Kid-Friendly
? Breeds with a higher rating in this area tend to be gentle and patient, while lower-rated breeds may feel uncomfortable with children.
0 100%
100%
Sociability
? Breeds with a higher sociability rating will want to spend time with you all day, while less-sociable breeds seldom seek out human interaction.
0 100%
80%
Intelligence
? Breeds with higher intelligence ratings are more curious, investigative, and easy to train. Less-intelligent breeds are less trainable but often laid-back and easygoing.
0 100%
80%
Playfulness
? Breeds that score higher in this area have strong hunting instincts that make them great playtime companions.
0 100%
80%
Independence
? Breeds that score higher in this area are able to spend hours alone, while less-independent breeds require plenty of attention.
0 100%
80%
Vocality
? A higher rating in this area indicates a breed prone to plenty of meowing and other vocalizations, while less-vocal breeds are happy to stay quiet.
0 100%
100%
Grooming
? Breeds with higher grooming scores require more maintenance like brushing and bathing, while lower-scored breeds are virtually maintenance-free.
0 100%
80%

About the Oriental Bicolor Cat

An engaging personality plus an adorable appearance add up to none other than the Oriental Bicolour Cat!

These stunning kitties are almost identical to their Oriental Shorthair or Oriental Longhair cousins; in fact, many of these Orientals are also Oriental Bicolor cats. We’ll cut through the confusion in the breed history discussion but first, what can you expect if you bring an Oriental Bicolour into your family?

As it turns out, these fascinating felines have a whole lot more than mesmerizing good looks going for them! Their personalities tend toward the playful, curious side - and that’s probably due to heavy Siamese influence. These intelligent cats love to follow their family members around, getting involved in whatever’s happening at the moment. Like their close cousins, they are exceptionally chatty, chirping, warbling, and sometimes meowing loudly to emphasize a point!

Not only do Oriental Bicolor cats appreciate their human family members, they have a fondness for other felines and they even make friends with dogs. Where some breeds tend to be a bit standoffish with other pets, Oriental Bicolours like constant companionship and develop close relationships with other animals. These kitties like to have at least one friend nearby at all times and without enough attention from the people and animals they bond with, can develop serious depression.

Oriental Bicolors are a bit more demanding than many other cats, it’s true: But what they require in attention, they repay infinitely. Loving, attentive, fond of cuddling, and always happy to brighten even the gloomiest day, this kitty is one you’ll cherish for a lifetime. 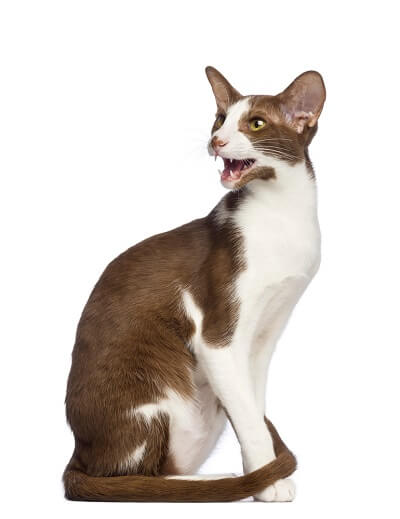 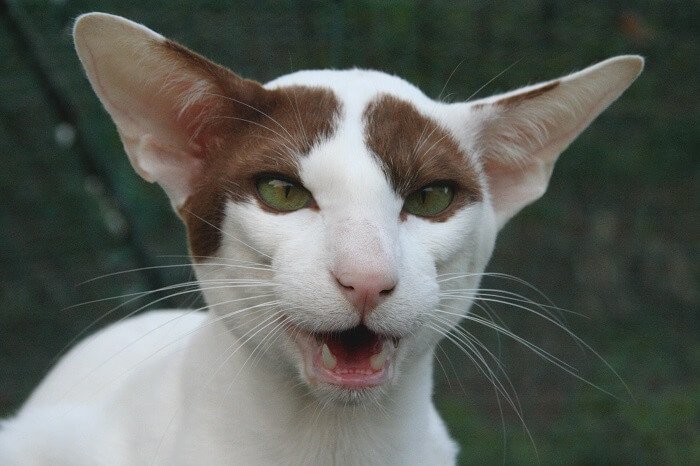 Oriental Bicolour cats have no exceptional nutritional needs, however they will greatly benefit from a high-protein diet that includes real meat or fish as the number one ingredient. The better your cat’s food quality, the better their health and longevity is likely to be.

The Oriental Bicolour usually has a short single-layer coat, so there’s no fluffy undercoat to shed. These cats can keep themselves looking fabulous without much help from their people. Still, it’s helpful to offer a quick brushing once or twice per week. This can help reduce shedding and eliminate the risk of hairballs, plus it’s something your feline friend is likely to enjoy! After brushing, you can polish the coat by giving it a rubdown with a chamois or a silk scarf.

Since Oriental Bicolour cats are fond of climbing, you may wish to protect your furniture by keeping their claws trimmed. Teach your kitten to accept “invasive” grooming procedures like tooth brushing and claw trimming from a young age, so it’s part of their routine.

Oriental Bicolour cats are accomplished athletes, and you’ll have no trouble ensuring that they get enough exercise for good health. Running, jumping, and climbing are favorite activities, and like other Oriental cats, this breed excels at interactive games such as fetch.

Set your pet up for success (and keep your furniture intact) by offering a tall cat tree and other items such as window seats and scratching posts that allow for the expression of athleticism minus any cringing on your part. Without these items, your Oriental Bicolor will look for other places to offer elevated views - your Great Aunt’s 19th century china cabinet might be one of them!

Oriental Bicolor cats are always looking for things to examine and play with, so keep your kitty well stocked with an assortment of toys. Without them, your cat will find other things to play with - and you might not appreciate their choices!

Oriental Bicolour cats are a robust breed in general. Still, there is a risk of complications that are common to the Oriental group in general including cancer, asthma, dilated cardiomyopathy, megaesophagus, liver amyloidosis, feline lower urinary tract disease, and progressive retinal atrophy. Some are cross-eyed.

The first Oriental Bicolour cats were the result of pairings initiated by Lindajean Grillo, who owned Ciara Cattery. In 1979, Grillo decided to pair Siamese cats with bicolored American Shorthair cats. The most appealing bicolored offspring were then mated back with Siamese or Oriental cats to enhance type.

American cats were imported as a method of assuring genetic diversity when mating Oriental Bicolor cats with one another. The International Cat Association (TICA) granted its official recognition in 1983, and a cat named Ciara Quite-N-Oreo was the first TICA Oriental Bicolour champion.

In 2003, Federation International Feline (FIFe) granted championship recognition status to bicolor Oriental Shorthair cats. The organization granted recognition to white and colorpoint cats from the same group in 2005, but separated them further into the breed name Seychellois.

In 2004, Oriental Bicolour cats were imported to the UK. The Governing Council of the Cat Fancy (GCCF) granted recognition in 2006, and in 2008, the breed achieved provisional status.

It’s worth noting that different organizations categorize Oriental Bicolor cats differently. Some differentiate between long and shorthaired varieties, and some opt to keep solid and colorpoint patterns separate from one another.

The GCCF treats Oriental Bicolour cats as a separate, distinct breed and prohibits cats that carry color-pointed longhair genes. GCCF does allow for outcrossing but only to Siamese, Balinese, Oriental Longhair, and Oriental Shorthair cats. The resulting offspring are not allowed registry under the outcrossed parent’s breed but instead, must be registered as Oriental Bicolour cats, with one exception: Any offspring without white spots can be registered and shown as Orientals. 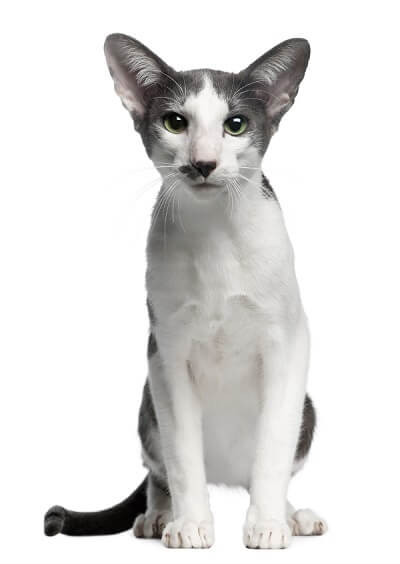 In general - and without taking any registry’s rules into account - an Oriental Bicolor is an Oriental type cat with either long or short hair, with white spots.

Most registries don’t consider Oriental Bicolour as a standardized cat breed. Instead, the term is a descriptive one that’s used to discuss coat pattern.

Despite having a name that suggests exotic origins, all Oriental cat breeds began with experimentation in England, in the 1950s. Instead of discussing a locale, the term “Oriental” is a term used to discuss type. 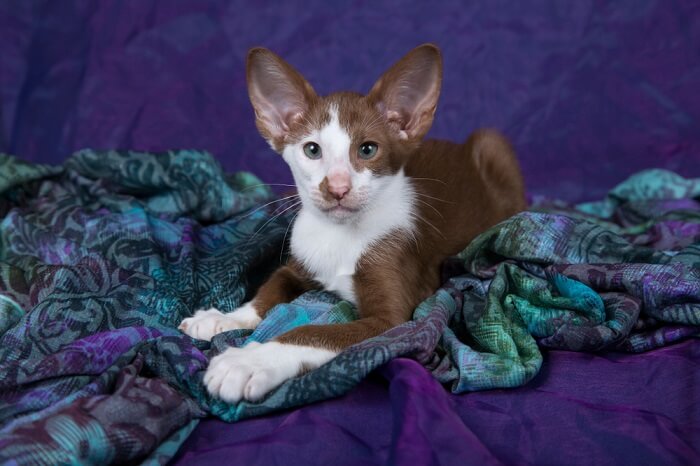 The eyes should be medium size, with an almond shape. They should slant slightly, continuing the visual lines that the head and ears create. Various eye colors are accepted; most Oriental Bicolor cats have green eyes; colorpoint varieties typically have blue eyes.

The legs should be long and slim, with the hind legs being longer than the forelegs. Paws should be small and dainty, and should exhibit an oval shape.

The tail should be long and thin, and should taper to a fine point.

The body is long, slim, and tubular. Oriental Bicolour cats should appear lithe and athletic.

The head is triangular, with a wedge-shaped muzzle and a long, straight nose that creates a distinctive elongated profile.

The Oriental Bicolour cat should have very large ears that continue the triangular lines of the head. The ears should have wide bases and pointed tips.

The coat may be long or short, with a soft, silky texture. Most Oriental Bicolour cats have short coats.

Color requirements depend on registry. In most cases, the term “Oriental Bicolor” refers to solid color Oriental cats with white spots in their coats.

How much does a Oriental Bicolor cat cost?

How big do Oriental Bicolor cats get?

The Average lifespan for Oriental Bicolor is 8-12 years.

Oriental Bicolor are short-haired cats. Therefore, they do not shed as much as long-haired cat breeds.