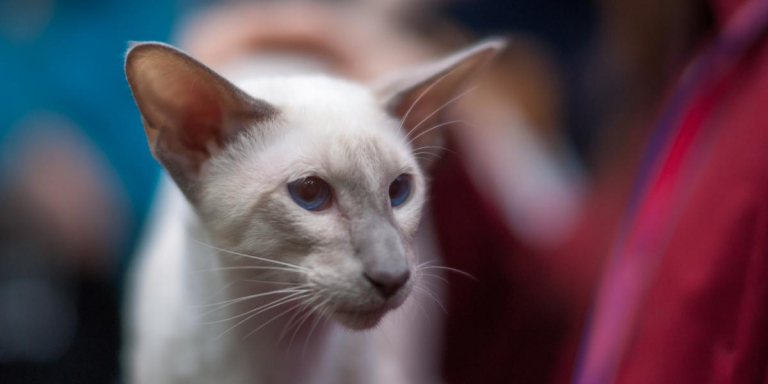 Temperament
? The breed’s dominant personality traits. While each individual has a unique personality, breed-specific genetics affect qualities like sociability, playfulness, and intelligence.
Curious, affectionate, easygoing, playful
Origin
? Where this breed was first established.
United States, United Kingdom
Other Names
? In addition to their official names, most breeds earn a few nicknames.
British Angora; Javanese; Foreign Longhair; Mandarin
Group
? Breeds are grouped by their size and coat type.
Medium-sized long-haired
Height
? The typical adult height among individuals of this breed. Height is measured from the top of the head to the bottom of the front paws.
8"- 10"
Body Length
? The typical adult body length among individuals of this breed. A cat’s length is measured from the base of the tail to the tip of the nose.
11"-14"
Weight
? The typical adult weight range of this cat breed.
6 - 12 pounds
Life Expectancy
? The average lifespan of the breed. While life expectancy is fairly consistent across all cat breeds, some breeds tend to live shorter or longer than others.
12-15 years
Price
? The average price.
$400-$2000
Affection Level
? Breeds with a high affection level want to give and receive a lot of attention, while less-affectionate breeds are not as interested in petting and snuggles.
0 100%
100%
Activity Level
? Breeds with high activity levels will engage more in active play and demand more space and attention.
0 100%
100%
Pet-Friendly
? How well the breed tends to get along with cats, dogs, and other pets.
0 100%
100%
Kid-Friendly
? Breeds with a higher rating in this area tend to be gentle and patient, while lower-rated breeds may feel uncomfortable with children.
0 100%
80%
Sociability
? Breeds with a higher sociability rating will want to spend time with you all day, while less-sociable breeds seldom seek out human interaction.
0 100%
100%
Intelligence
? Breeds with higher intelligence ratings are more curious, investigative, and easy to train. Less-intelligent breeds are less trainable but often laid-back and easygoing.
0 100%
100%
Playfulness
? Breeds that score higher in this area have strong hunting instincts that make them great playtime companions.
0 100%
100%
Independence
? Breeds that score higher in this area are able to spend hours alone, while less-independent breeds require plenty of attention.
0 100%
100%
Vocality
? A higher rating in this area indicates a breed prone to plenty of meowing and other vocalizations, while less-vocal breeds are happy to stay quiet.
0 100%
100%
Grooming
? Breeds with higher grooming scores require more maintenance like brushing and bathing, while lower-scored breeds are virtually maintenance-free.
0 100%
20%

About the Oriental Longhair Cat

An outgoing, friendly personality plus a silky, luxurious coat: These are just two things that make the Oriental Longhair Cat stand out! These lovely - and loving - cats share so many traits with their Oriental Shorthair cousins and other Oriental cat: They’re playful, intelligent, and far more social than the average feline, with a built-in need for attention.

Bring an Oriental Longhair cat into your home, and you’ll have a friend for life. These cats love nothing quite so much as to follow their favorite person’s every move, poking curious noses into everything from the refrigerator to the bathtub, and reaching out to tap with a paw whenever anything looks out of place.

Not only do Oriental Longhairs use body language to express themselves, they have the ability to develop an impressive vocabulary of meows, trills, and chirps in keeping with their Siamese heritage. These gregarious cats are opinionated and they love to engage in conversation.

When it comes to companionship, the Oriental Longhair cat has some special needs. These cats don’t do well at all when they’re left alone for too long; in fact, they can become seriously distressed or develop destructive habits if they’re deprived of the ability to socialize.

While they do tend to choose a favorite human to follow and snuggle with, they’re happy making friends with other family members including those with four legs and fur. Another social cat or a friendly dog makes the ideal companion for an Oriental Longhair, particularly if you’re someone who spends quite a bit of time away from home.

As cats go, Oriental Longhairs are certainly more affectionate than most. If your family wants at least one fantastic cuddle buddy, this breed is more than capable of lending a paw. 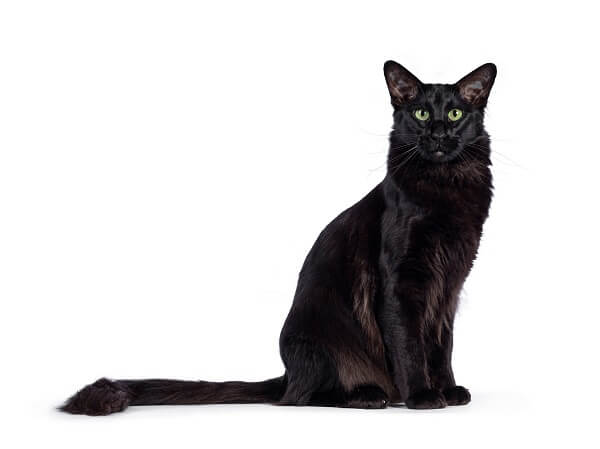 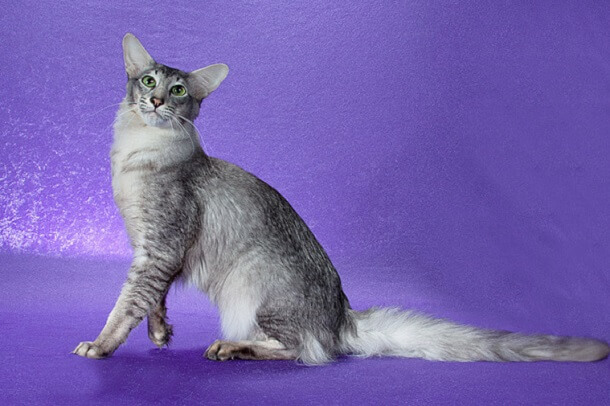 Oriental Longhair cats have no special nutritional needs, however they thrive on a high-protein diet that features real meat or fish as the main ingredient. Consider a brand with added Omega fatty acids to support skin and coat health.

The Oriental Longhair has a single-layer coat that’s more medium length than long; in fact, these cats look positively short-haired when placed alongside Persians and other cats with very long hair. You won’t need to do much brushing, just offer a daily once-over to help remove any loose hair and keep shedding to a minimum.

Frequent brushing can also reduce the frequency of hairball buildup, so you’re doing yourself and your cat a favor when you treat them to a grooming session.

Cuddly as they are, these cats also happen to be energetic. Regular toenail trims can help keep your furniture safe from damage. Last but not least, consider brushing your cat’s teeth at least a few times per week. Teach your kitten to accept a tiny toothbrush and some cat-friendly toothpaste and they’ll enjoy better dental health for life.

Oriental Longhair cats are extremely playful. They (and you) will benefit if you offer at least one tall cat tree, a window seat or two, and a nice scratching post in every room. Without these essentials and a well-stocked toy collection, these cats will jump and climb on every piece of furniture you own, and they’ll find all sorts of things to play with: Your toothbrush, those earrings you accidentally left on the nightstand, and your favorite collectibles are all considered fair game.

Oriental Longhair cats are generally healthy. Their Siamese heritage does increase the risk for certain issues though, including asthma, megaesophagus, feline lower urinary tract disease, dilated cardiomyopathy, liver amyloidosis, and progressive retinal atrophy. A small percentage of Oriental Longhairs are born cross-eyed - not a major health concern, but a flaw that’s prohibited in the show arena.

Also known as Javanese, British Angora, Foreign Longhair, and Mandarin cats, Oriental Longhairs are part of a larger group called the Oriental. These cats were developed using Siamese cats as key foundation members, with the goal of creating cats with the body style and personality of a Siamese, in a variety of different coat colors and patterns.

The Oriental story began in England in the 1950s. There, many cat breeds were brought to near extinction during the second world war when food shortages and constant bombardment placed a massive strain on society as a whole. As breeders worked to rebuild their foundations, new colors and patterns emerged.

The Oriental Shorthair and the Oriental Longhair have similar backgrounds: Both have Siamese heritage along with Russian Blue, Abyssinian, British Shorthair, and various domestic genetics that ultimately enlarged and improved the Siamese gene pool. After all, color is the only thing that distinguishes an Oriental from a contemporary Siamese cat.

At first, breeders tried to come up with a separate breed name for each colored Oriental cat that resulted from various pairings. Thus, we’re graced with such breeds as the Havana Brown, Foreigh White, and of course, the Oriental Bicolour. Over time, cat breed registries decided that there were just too many different color and coat combinations (all of them wonderful!) and the Oriental Shorthair / Longhair terminology was adopted.

While the Oriental Shorthair was accepted by the Cat Fanciers Association (CFA) in 1977, the Oriental Longhair didn’t gain official CFA recognition until 1995.

The International Cat Association (TICA) granted recognition in 1979 and today, the breed or variety is recognized by cat breed registries worldwide. 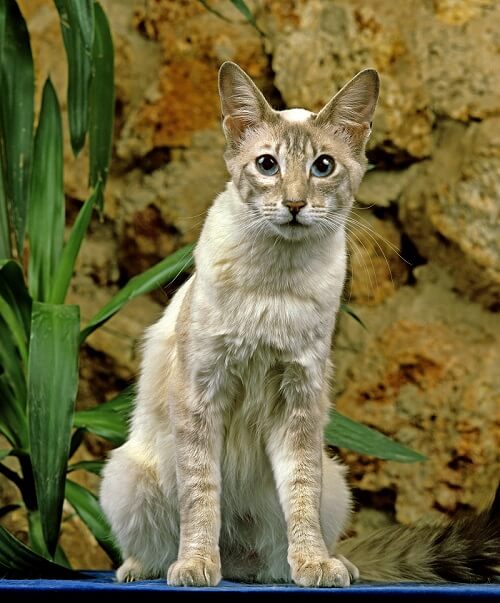 There are more than 300 coat colors and patterns within the Oriental Longhair family.

. Oriental Longhair cats retain their inquisitive, kitten-like traits well into their senior years. Their amusing personalities are the ideal match for anyone who wants a pet that longs for fun, games, and plenty of daily interaction. 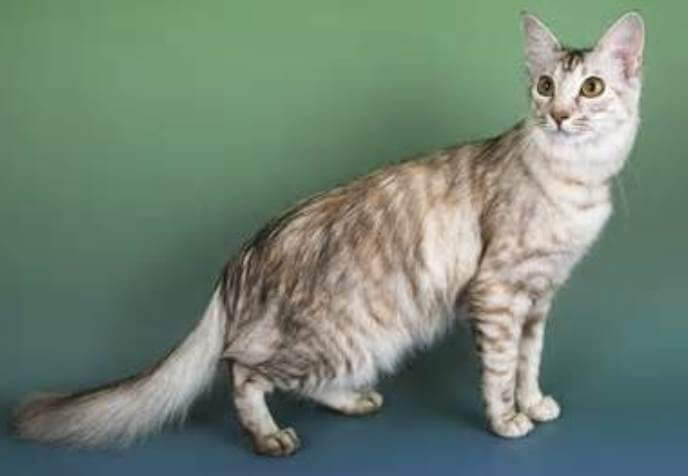 The eyes should be medium size, with an almond shape. They should slant slightly, continuing the visual lines that the head and ears create. Green eyes are common; blue eyes are preferred in cats with pointed colors. Odd eyes may be encountered.

The legs should be long and slim, with the hind legs being a little bit longer than the forelegs. The paws should be small, dainty, ovals.

The Oriental Longhair cat’s tail should be long and thin, and should taper to a fine point. The hair on the tail should create an elegant plume.

The body is long, slim, and tubular. Oriental Longhair cats should appear have a lean, graceful appearance.

The head is triangular, with a wedge-shaped muzzle and a long, straight nose that creates an elongated profile.

The Oriental Longhair cat should have very large ears that continue the triangular lines of the head. The ears should have wide bases and pointed tips.

The coat should be of medium-long length, without a downy undercoat. The fur should lie close to the body so that it appears shorter than it is. The longest hair should be on the tail.

A vast range of colors and patterns are acceptable.

How much does a Oriental Longhair cat cost?

How big do Oriental Longhair cats get?

The Average lifespan for Oriental Longhair is 12-15 years.

Oriental Longhair are long-haired cats, so you do have to expect a certain amount of shedding from this breed, but they don't shed as much as other cat breeds.