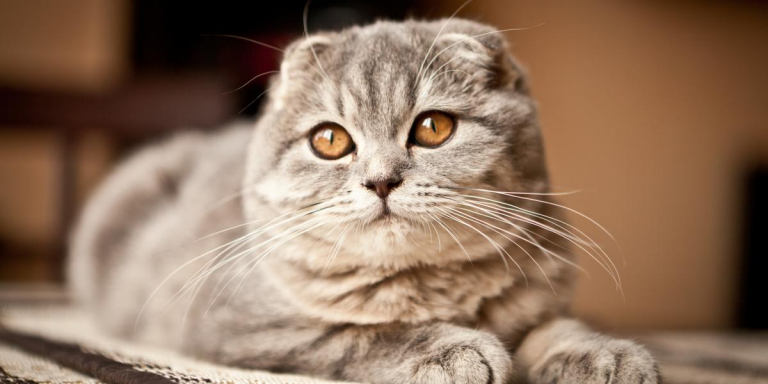 Temperament
? The breed’s dominant personality traits. While each individual has a unique personality, breed-specific genetics affect qualities like sociability, playfulness, and intelligence.
Family-oriented, quiet, affectionate, loyal
Origin
? Where this breed was first established.
United Kingdom
Other Names
? In addition to their official names, most breeds earn a few nicknames.
Lop-eared cat, Scot Fold cat
Group
? Breeds are grouped by their size and coat type.
Medium to large short-haired and long-haired
Height
? The typical adult height among individuals of this breed. Height is measured from the top of the head to the bottom of the front paws.
8"- 10"
Body Length
? The typical adult body length among individuals of this breed. A cat’s length is measured from the base of the tail to the tip of the nose.
14"-16"
Weight
? The typical adult weight range of this cat breed.
6-13 pounds
Life Expectancy
? The average lifespan of the breed. While life expectancy is fairly consistent across all cat breeds, some breeds tend to live shorter or longer than others.
13-15 years
Price
? The average price.
$1000 - $2000
Affection Level
? Breeds with a high affection level want to give and receive a lot of attention, while less-affectionate breeds are not as interested in petting and snuggles.
0 100%
80%
Activity Level
? Breeds with high activity levels will engage more in active play and demand more space and attention.
0 100%
40%
Pet-Friendly
? How well the breed tends to get along with cats, dogs, and other pets.
0 100%
60%
Kid-Friendly
? Breeds with a higher rating in this area tend to be gentle and patient, while lower-rated breeds may feel uncomfortable with children.
0 100%
60%
Sociability
? Breeds with a higher sociability rating will want to spend time with you all day, while less-sociable breeds seldom seek out human interaction.
0 100%
60%
Intelligence
? Breeds with higher intelligence ratings are more curious, investigative, and easy to train. Less-intelligent breeds are less trainable but often laid-back and easygoing.
0 100%
80%
Playfulness
? Breeds that score higher in this area have strong hunting instincts that make them great playtime companions.
0 100%
80%
Independence
? Breeds that score higher in this area are able to spend hours alone, while less-independent breeds require plenty of attention.
0 100%
80%
Vocality
? A higher rating in this area indicates a breed prone to plenty of meowing and other vocalizations, while less-vocal breeds are happy to stay quiet.
0 100%
20%
Grooming
? Breeds with higher grooming scores require more maintenance like brushing and bathing, while lower-scored breeds are virtually maintenance-free.
0 100%
60%

About the Scottish Fold Cat

With just one look at the adorable Scottish Fold cat, it’s easy to see how this breed got its name! Not only are these kitties cute beyond compare, the breed is a family friendly one. Scottish Fold cats get along well with kids and other pets including friendly felines and well behaved dogs.

Gentle and playful, Scottish Fold cats are less rambunctious than many other breeds. They are happy to spend time simply enjoying your company, and they're likely to follow you throughout the house as you complete your daily routine.

If you're someone who is looking for a cat that likes to converse, consider a Scottish Fold. With far quieter voices then many other vocal breeds including the Siamese, these cats can develop quite an interesting vocabulary, which still use to express themselves and chat to you about everything from the level of food in their dish to the fact that it's time for you to wake up in the morning. Talk to a Scottish Fold, and you can expect quite a bit of chatter in return.

If you are hoping to bring a Scottish Fold kitten into your family, be prepared to spend a little bit of time on a waiting list. These kitties are very popular, yet they can be difficult to find. The good news is, Scottish Fold cats are such incredible companions, they are well worth the wait.

Scottish Fold cats enjoy company and dislike being left alone. Luckily, these kitties are perfectly happy with companionship from another animal on those days when you need to work or spend several hours per day away from home for another reason,. When you return, you can count on a happy greeting. 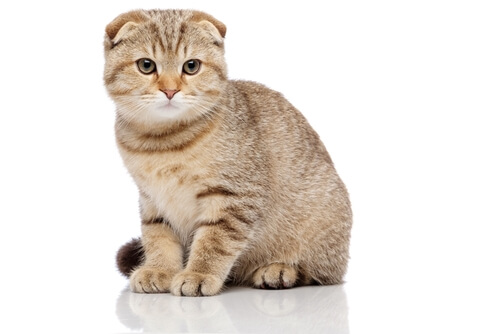 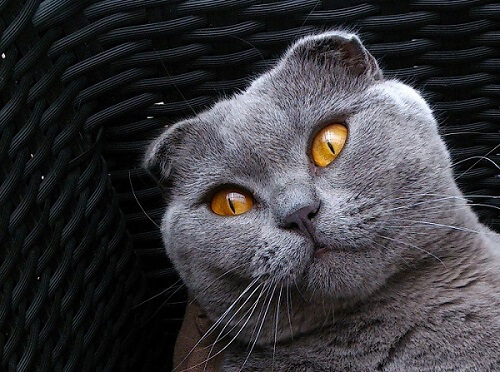 The Scottish Fold cat has no special nutritional needs, however we recommend offering a high-quality food with a high level of protein and minimal carbohydrates. If you are offering a commercial brand rather than fresh food, ensure that the first ingredient is real meat or fish.

If your cat's ears are tightly folded, you might need to help your kitty keep them clean and prevent buildup. At least once or twice per week, use a cotton ball moistened with a 50-50 mixture of warm water and vinegar to gently wipe beneath the folds. Never use cotton swabs in an attempt to clean the interior portion of your cat's ears. If it appears as though wax and debris is building up down inside the ear and out of reach of your cotton balls, give your vet a call. They can safely clean this sensitive area while protecting your cat's hearing.

There are two other important grooming routines you might consider: Nail trimming and toothbrushing. Teach your kitten to accept this type of handling from a young age to prevent struggles later in life.

The Scottish Fold cat likes to play, particularly when there’s at least one friend to join in the fun. If you have two cats, you can expect them to run, jump, and climb together. If it's just you and your cat, they'll appreciate every opportunity for interactive play. Just like other cats, Scottish Folds appreciate window seats, cat trees, scratching posts, puzzle toys, and everyday objects like cardboard bags and boxes. The more opportunities you take to enrich your cat's environment, the happier they will be.

Later in life, your Scottish Fold might need more encouragement to engage in energetic play sessions between naps. Keep an eye on their weight and try to increase activity if possible since obesity can make joint problems and other conditions worse.

The dominant gene that causes a Scottish Fold cat's ears to flop forward can also cause skeletal deformities when Scottish Fold cats with folded ears are bred to one another. For this reason, most responsible breeders pair one Scottish Fold with a straight-eared cat, usually an American or British Shorthair.

Some Scottish Fold cats develop degenerative joint disease in the ankle, knee, and tail joints. These cats are also at risk for polycystic kidney disease and hypertrophic cardiomyopathy, which are common among many otherwise healthy cat breeds.

The first Scottish Fold was a barn cat named Susie. Like many of the cats that capture breeders' interest, Susie had a unique genetic trait: Her folded ears were caused by softened cartilage that prevented the ears from standing up like the average felines do.

Susie was happily catching mice on a farm in Tayside, Scotland when she captured the attention of a shepherd named William Ross. In 1961, he and his wife Mary acquired one of Susie's female kittens when she had a litter by a local tomcat with normal, stand up ears. They named the kitten Snooks and when she reached adulthood, she was mated with a British Shorthair and had a litter of her own.

Some of the resulting kittens had folded ears, leading the Williams' to call the new hybrid "Lop-eared cats." Ross registered the Scottish Fold cat breed with UK’s Governing Council of the Cat Fancy (GCCF) in 1966.

In 1971, Dr. Neil Todd brought the first Scottish Fold cats to the United States. One of these cats found a home with a Pennsylvania breeder named Sally Wolf Peters. She is credited with developing the breed as it exists in the US today. Scottish Fold breeders continue making outcrosses between Scottish Folds and British Shorthairs or American Shorthairs, which contribute diversity to the gene pool.

By the middle of the 1970s, the Scottish Fold cat had gained official recognition by multiple breed registries and in 1978, the breed was granted championship status by The Cat Fanciers Association (CFA). Today, these adorable, personable kitties are popular all over the world.

Not all registries accept the breed; for example, the GCCF withdrew its recognition of the Scottish Fold in 1971 out of concern over potential skeletal defects that can lead to excruciating pain for affected individuals. 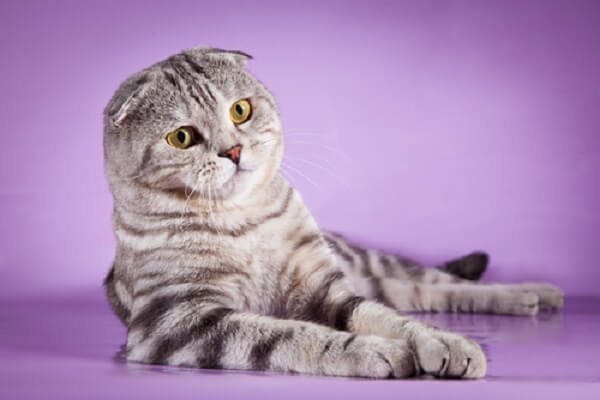 All Scottish Fold kittens are born with ears that appear straight. The ears begin to fold around three weeks of age.

Even though the Scottish Fold's ears have a unique shape, they're capable of rotating and making other motions similar to the average cat's ears. 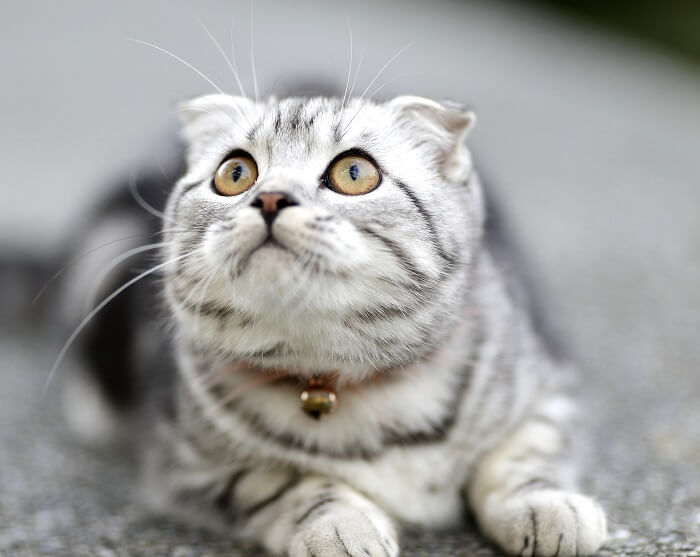 The eyes should be large and well round, separated by the nose, which should be broad. The eyes should have a sweet expression and a wide, open appearance. Eye color should correspond with coat color.

The legs should be strong and proportionate to the body. The feet should be rounded.

The Scottish Fold cat should have a medium to long tail that is in proportion to the body. The tail should taper, and should have a rounded tip rather than a whippy appearance.

The body should have a rounded appearance, and should be well-padded. Males may be significantly larger than females.

The head should be well rounded, with round whisker pads and prominent cheeks. The chin and jaw should be firm. Males may exhibit significant jowliness.

The Scottish Fold cat’s ears should be small, folded forward and downward, and set to expose the head’s rounded cranial structure.

The coat may be long or short. Shorthair Scottish Fold cats should have a dense, plush coat with a soft texture, with hair that stands away from the body. Medium-long to longhair Scottish Fold cats should have a full coat with toe tufts, a ruff, britches, ear furnishings, and a pronounced tail plume. In longhaired cats, short facial hair is permissible.

The Scottish Fold may be of any color or pattern. Buttons and lockets are permitted. Nose leather and paw pad color should correspond with coat color.

How much does a Scottish Fold cat cost?

How big do Scottish Fold cats get?

Scottish Fold cats tend to be medium in size. A fully grown Scottish Fold cat might weigh between 6-13 pounds or more and range in height anywhere from about 8"- 10" inches tall.

The Average lifespan for Scottish Fold is 13-15 years.

Scottish Fold are long-haired cats, so you do have to expect a certain amount of shedding from this breed, but they don't shed as much as other cat breeds.