Did you know that your feline friend is an obligate carnivore? This means that their diet should be predominantly meat. But are all meats suitable for cats, or are some healthier than others?

You might enjoy bacon for breakfast, maybe in a sandwich with ketchup, or as part of a fry-up. So, can cats eat bacon too? Well, the short answer is no, cats shouldn’t eat bacon. Although bacon is not toxic to your furry family member, it may still be a health risk. Let’s find out why.

Many people love to eat bacon. It’s a very popular food and cats like it too! However, if you want to spoil your cat with some tasty foods, there are much better options than bacon. 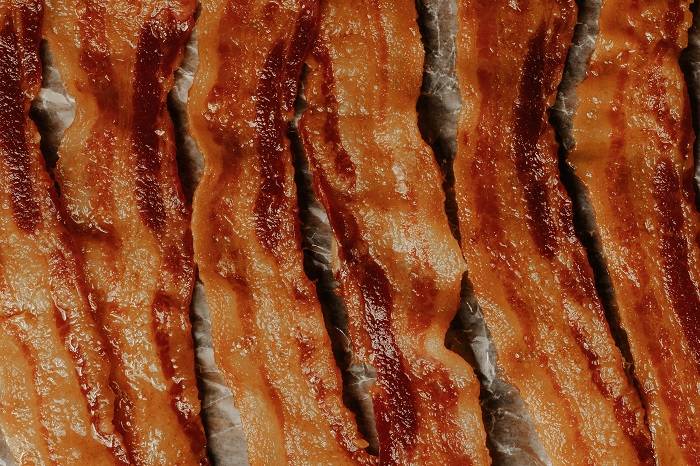 Of course, standard bacon is pork-based, but turkey bacon will contain a much lower fat content because turkey is such a lean meat. But, turkey bacon still has high sodium levels and is higher in cholesterol than pork bacon. 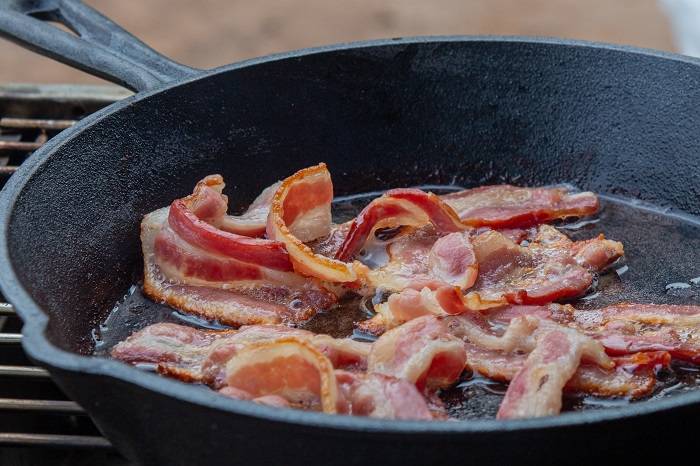 As you can probably gather from the nutritional information, bacon isn’t exactly a healthy treat for your kitty. Because it’s cured with salt, it contains a lot of sodium, which we know is a risk factor for heart disease and high blood pressure in people.

While these links aren’t proven in cats, their daily sodium requirement is much lower than ours, and high levels can lead to salt poisoning. Bacon is also high in fat, which is a definite no-no when it comes to feeding your furry friend.

On the plus side, bacon is high in protein, which your cat needs for growth and repairing tissue. It’s also a good source of potassium, which has many roles in your cat’s body, including keeping their heart, bones, and muscles healthy.

Bacon’s high phosphorous content in theory will keep bones in tip-top shape and help with kidney function. Bacon also contains lots of B vitamins and selenium, an antioxidant. These might sound like great benefits, but for cats, the nutritional downsides of bacon are far more significant.

Benefits Of Bacon For Cats 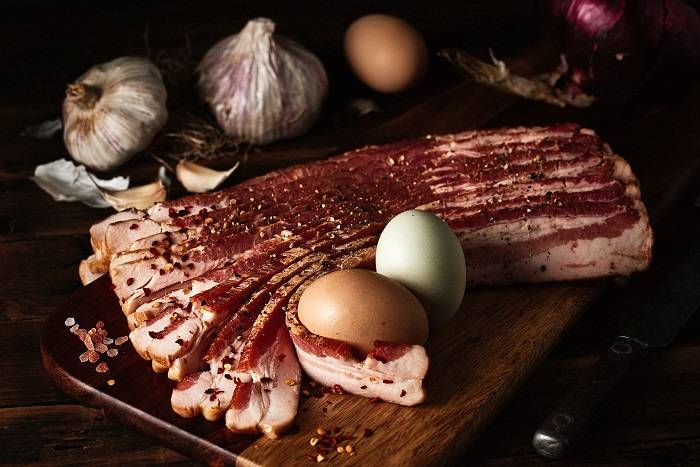 Looking at the nutritional facts about bacon, you may think that bacon could be given as an occasional treat for your purrfect princess. After all, cats need protein as part of their diet, and the various vitamins and minerals in bacon are also important.

The truth is that there are much healthier foods that you can offer your cat that contain the same nutrients.

For example, cooked turkey or chicken breast are much lower in salt and fat, and your kitty will still think they’re yummy. And don’t forget, as long as their main cat food is nutritionally complete, they’ll be getting the exact ingredients they need to stay healthy anyway.

How Much Bacon Can A Cat Eat? 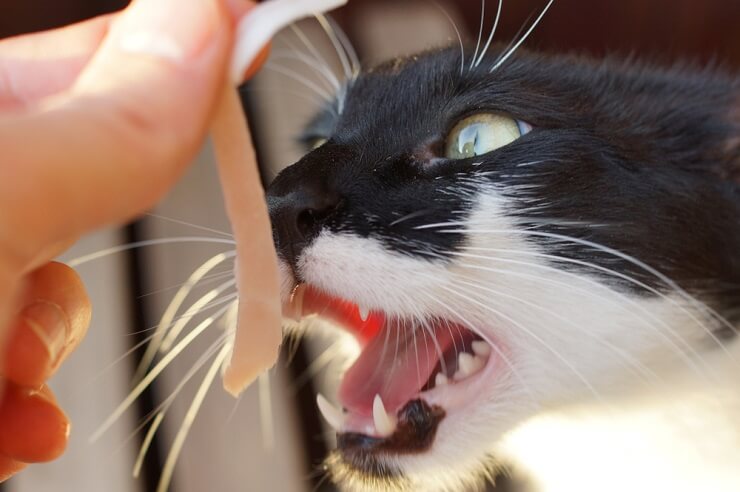 It’s best to avoid feeding bacon, but a tiny piece every now and then probably won’t cause your cat harm.

Ideally, cats shouldn’t have bacon. A small amount of bacon as a one-off shouldn’t harm your cat, though. So, if your clever kitty sneaks some by accident when you’re not looking, you don’t have to worry too much. However, it’s best avoided as a treat, in favor of other low-fat, low-salt foods.

If you decide to give your cat a small amount of bacon, you should make sure that it’s cooked bacon rather than raw bacon and remove any visible fat.

Any bacon grease should be absorbed to reduce the chance of it giving your furry friend an upset tummy. A sliver the size of your little fingernail is plenty to offer, even if your cat enjoys the taste.

How Often Can A Cat Eat Bacon? 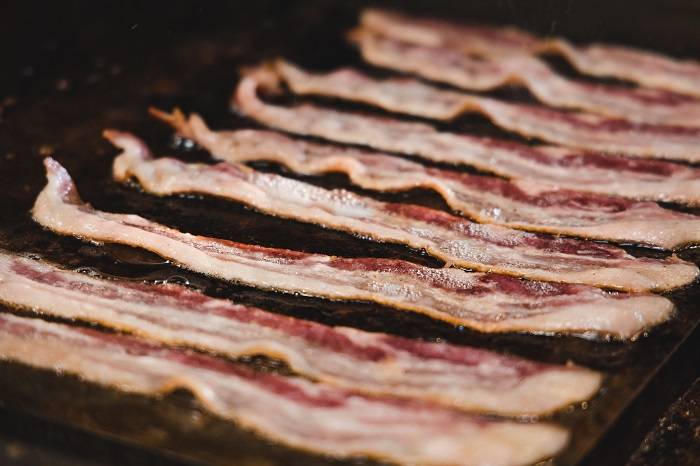 It’s best not to give your cat bacon at all. Whether it’s streaky, back, turkey bacon, or even bacon bits, bacon will not provide any nutrients your cat can’t get from healthier foods.

If you really want to give your cat some bacon, you should give a tiny amount and make sure it’s cooked and any fat is removed. You shouldn’t give your cat bacon often, but once a month is unlikely to do them harm. 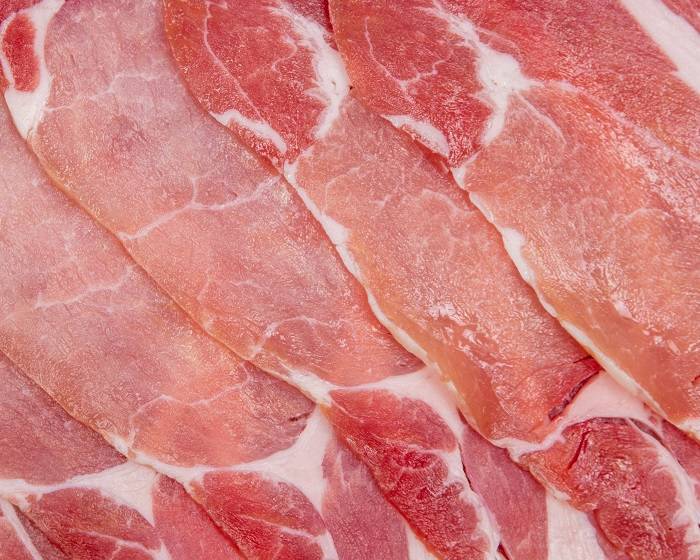 While bacon isn’t used in commercial cat foods, it’s sometimes contained in cat treats. This might be because bacon has a strong smell and taste, making it extra enticing for your cat.

Bacon as part of a cat treat won’t do any harm, but as with all treats, they should only be given in moderation.

The Risks Of Eating Bacon For Cats 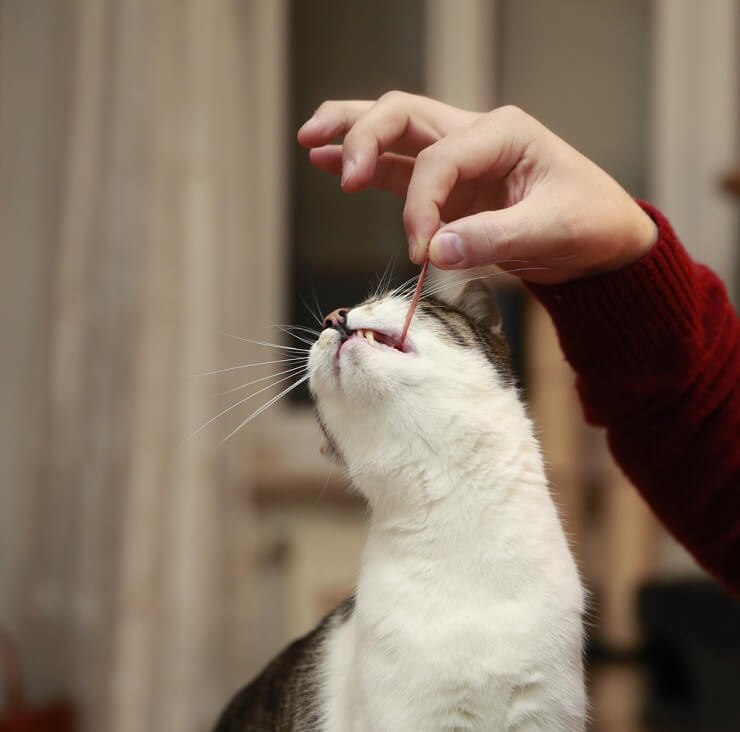 Bacon contains a lot of salt and fat, which can make your cat sick, especially if eaten in large amounts.

There are quite a few risks when it comes to feeding your cat bacon. Firstly, raw bacon may contain parasites or harmful bacteria that might cause your cat to become sick. Therefore, if you’re thinking of giving your cat a small amount of bacon, it should be cooked bacon rather than raw.

Another risk is related to the fat content of bacon, and this is the risk of pancreatitis or an upset tummy. Removing visible fat from the bacon will help, but bacon grease is full of fat, and don’t forget that cooking oils and fats will also make your cat unwell.

The fat content might cause another issue too, and that’s obesity. If your pet is a bit podgy, you’ll want to steer clear of fatty titbits like bacon to stop them piling on the pounds!

Bacon also contains high salt levels, which are linked to heart disease and high blood pressure in people. It’s not proven whether this risk is the same for cats, but it stands to reason.

Half a slice of bacon contains nearly five times your cat’s daily sodium requirement, so too much bacon could even cause salt poisoning. Although turkey bacon is lower in fat, it still contains lots of sodium because it’s salt-cured. Hence, turkey bacon is still not a healthy option.

The final risk to bear in mind is the risk posed by other ingredients cooked with the bacon. Seasonings could cause your cat to vomit or have diarrhea, and some foods, like onions and garlic, are poisonous. So, any bacon you give to your cat should be cooked without seasonings or other ingredients. 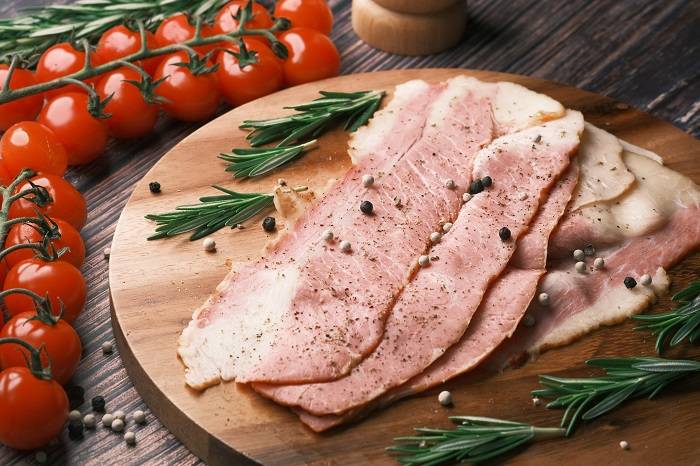 Cats tend to love the taste of bacon! Maybe it’s the saltiness or the smokiness, but most cats can’t get enough of it. This is a shame, of course, because it’s nice to give our cats the tasty treats that they love.

However, the most important part of being a pet parent is making decisions to keep your purry pal as healthy as possible. 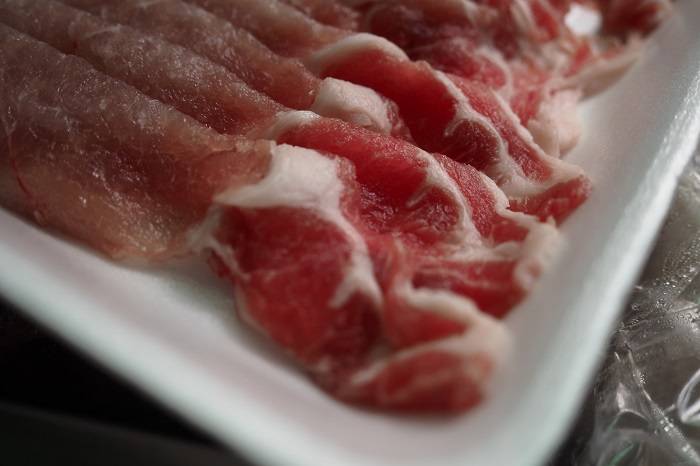 Many people love to eat bacon. It’s a very popular food and cats like it too! However, if you want to spoil your cat with some tasty foods, there are much better options than bacon.

It might seem a bit mean, but in the long run, it’s best for your cat’s health to choose an option that’s lower in salt and fat. So, go ahead and spoil your feline friend occasionally, but check with your veterinarian to make sure what you’re giving is safe first.

How much bacon can I give my cat?

It’s not a good idea to give your cat bacon because it’s very high in fat and salt. However, if they sneak a little bit when you’re not looking, you don’t need to rush to the vet. If you do decide to give your cat bacon, only offer cooked bacon, and remove the fat. A piece the size of your fingernail might seem stingy, but it’s more than enough for your cat.

You shouldn’t give your kitten bacon, whether it’s cooked or raw. Kittens should be fed nutritionally balanced kitten food so that they have all the nutrients they need to grow and develop. Occasionally giving treats are okay, but these should be treats rather than table scraps.