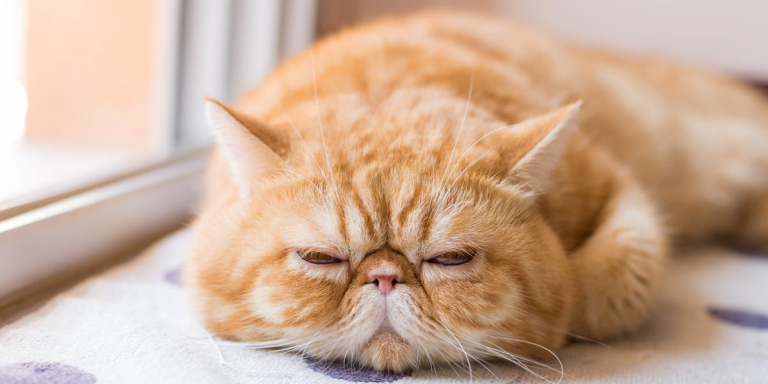 Temperament
? The breed’s dominant personality traits. While each individual has a unique personality, breed-specific genetics affect qualities like sociability, playfulness, and intelligence.
Endearing, quiet, affectionate, gentle
Origin
? Where this breed was first established.
United States
Other Names
? In addition to their official names, most breeds earn a few nicknames.
Shorthaired Persian
Group
? Breeds are grouped by their size and coat type.
Small to medium-sized shorthair
Height
? The typical adult height among individuals of this breed. Height is measured from the top of the head to the bottom of the front paws.
10"-12"
Body Length
? The typical adult body length among individuals of this breed. A cat’s length is measured from the base of the tail to the tip of the nose.
11"-16"
Weight
? The typical adult weight range of this cat breed.
8-15 pounds
Life Expectancy
? The average lifespan of the breed. While life expectancy is fairly consistent across all cat breeds, some breeds tend to live shorter or longer than others.
12-16 years
Price
? The average price.
$1,000-$5,000
Affection Level
? Breeds with a high affection level want to give and receive a lot of attention, while less-affectionate breeds are not as interested in petting and snuggles.
0 100%
100%
Activity Level
? Breeds with high activity levels will engage more in active play and demand more space and attention.
0 100%
50%
Pet-Friendly
? How well the breed tends to get along with cats, dogs, and other pets.
0 100%
90%
Kid-Friendly
? Breeds with a higher rating in this area tend to be gentle and patient, while lower-rated breeds may feel uncomfortable with children.
0 100%
90%
Sociability
? Breeds with a higher sociability rating will want to spend time with you all day, while less-sociable breeds seldom seek out human interaction.
0 100%
90%
Intelligence
? Breeds with higher intelligence ratings are more curious, investigative, and easy to train. Less-intelligent breeds are less trainable but often laid-back and easygoing.
0 100%
70%
Playfulness
? Breeds that score higher in this area have strong hunting instincts that make them great playtime companions.
0 100%
80%
Independence
? Breeds that score higher in this area are able to spend hours alone, while less-independent breeds require plenty of attention.
0 100%
40%
Vocality
? A higher rating in this area indicates a breed prone to plenty of meowing and other vocalizations, while less-vocal breeds are happy to stay quiet.
0 100%
40%
Grooming
? Breeds with higher grooming scores require more maintenance like brushing and bathing, while lower-scored breeds are virtually maintenance-free.
0 100%
50%

About the Exotic Shorthair Cat

The adorable, personable Exotic Shorthair cat is a cross between the Persian and the American Shorthair. Friendly toward newcomers and affectionate toward family members, these cats adore their people and enjoy nothing quite so much as the attention of their human companions. They are fond of cuddling – so much so, that it's not at all uncommon for them to climb under the covers with their favorite person.

Exotic Shorthair cats are famous for following their family members around the house. If you are sitting in one room and their toys are in another, they may bring a favorite toy into the room where you are and play with it next to your feet.

Speaking of playfulness, Exotic Shorthair cats do enjoy playtime, but they typically play in a gentler, slower manner than the average cat. If you live in a small apartment and don't have room for a huge cat tree, this might be the ideal breed for you! 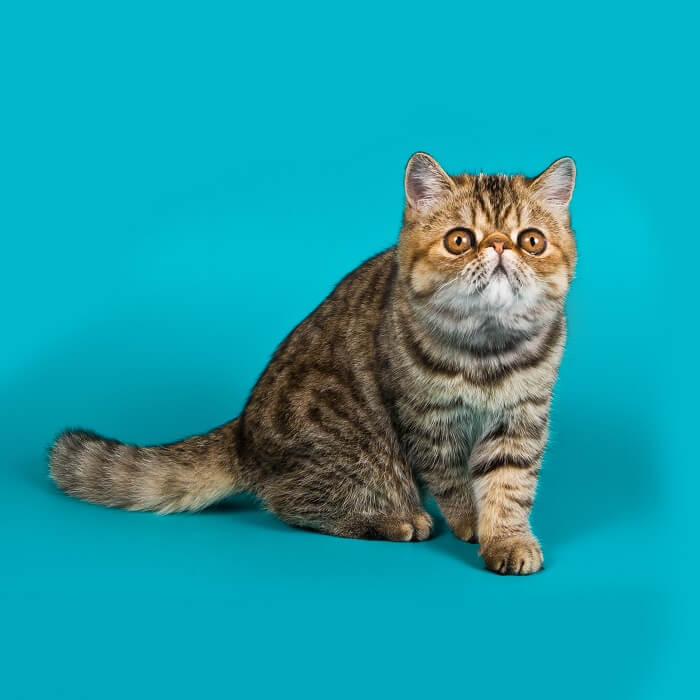 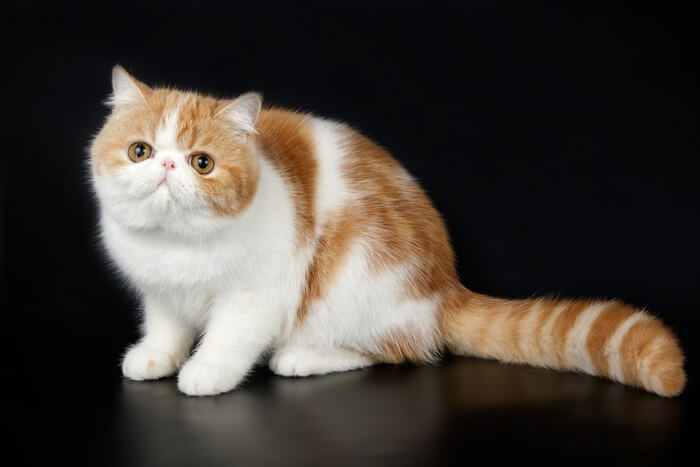 Exotic Shorthair cats have no special nutritional needs, however they are less active than some other cat breeds and may be prone to obesity. We recommend offering a high-protein diet without too many carbohydrates. Since obesity can lead to numerous health problems, it's very important to feed your cat the proper amount.

Even though these cats have short coats, they require frequent grooming. True, you'll only need to brush them once or twice per week, however you will need to clean the eye area and the folds of the face once or twice per day to prevent irritation. Consider teaching your kitten to accept toothbrushing and nail clipping.

Since it's important to prevent obesity particularly in laid-back cat breeds like the Exotic Shorthair, you'll want to provide fun toys and make yourself available for interactive play.

Since these cats can have some difficulty breathing when they exert themselves, it's important to monitor them for signs of trouble as you’re playing exciting games like "Chase the laser."

Like all cats, Exotic Shorthairs enjoy high vantage points. They'll happily climb to the top of a cat tree, but there's also a good likelihood that they'll be happy with a window seat or a view from a comfy spot on the couch. Do make scratching posts available so that your kitty can stretch and scratch as nature intended.

Just like their Persian cousins, Exotic Shorthair cats do have a couple of known health issues. These include respiratory health problems or difficulty breathing, along with some tear staining. Exotic Shorthair cat's eyes protrude slightly from their faces, increasing the risk of scratches and other eye injuries. This is a common issue in all flat faced cats.

Brachycephalic cats including Persians and Exotic Shorthairs can overheat quickly in hot temperatures. Again, this is an issue caused by the shortened respiratory tract. The best prevention is to keep your cat indoors, at a comfortable temperature.

The Exotic Shorthair is a relatively new cat breed. Sometimes called a Persian in a petticoat, this lovable cat was developed in the 1950s, when cat breeder Carolyn Bussey attempted to create a brown Persian by crossing a Persian cat with a Burmese. Although the resulting kittens were black in color, they were absolutely adorable and Bussey knew that she was on to something.

In 1967, the Cat Fanciers Association granted the Exotic Shorthair championship status. In 1971, CFA's grand champion was an exotic Shorthair and the breed continued to gain popularity.

If you think that these cats look like shorthaired Persians, you're right! According to CFA, they meet all Persian breed standards, with the exception of their short coat. 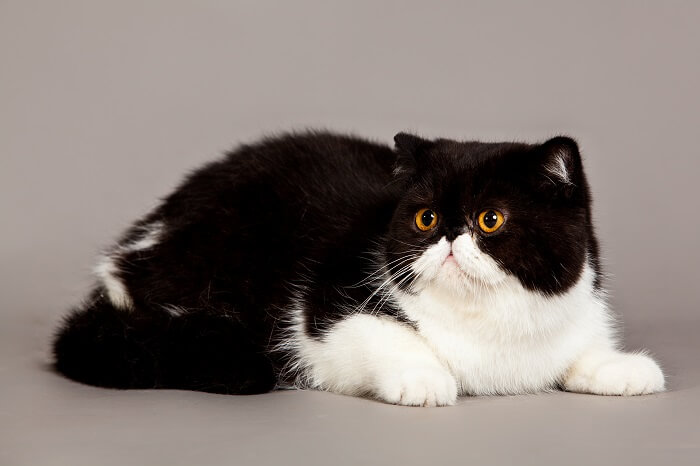 Exotic Shorthair cats are considered to be non-shedding. This description should be taken with a grain of salt since all cats – even so-called hairless breeds do lose hair over time. If you bring an ExoticShorthair cat into your family, you'll notice far less shedding than you would with the average cat, but you'll still find a few hairs here and there.

Thanks to its relatively low maintenance coat, the Exotic Shorthair is nicknamed the lazy man's Persian. 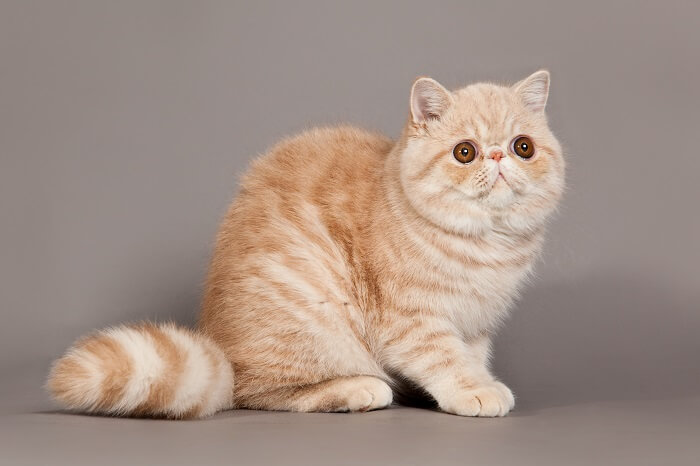 An Exotic Shorthair cat should have large, rounded eyes. The eyes may be of any color that complements the coat.

The legs should be somewhat short, but they should be thick with a strong appearance. The paws should be well rounded, and should be proportionate to the legs.

The tail should be of medium length, and should appear proportionate to the body.

The body should be softly rounded, with a cuddly, teddy bear appearance. No feature should be more prominent than another and the overall impression should be that of harmonious balance.

The Exotic Shorthair cat should have a large, round head that sits atop a short, broad neck. The cheeks should be full, the nose should be short and broad, and the muzzle should be short as well. The chin should be well-developed, with a proper bite.

The ears should be short and round tipped. They should be spaced so that the outer edges of the ears continue the rounded line of the head.

Exotic Shorthair cats have a thick double coat with a soft, luxurious feel.

All colors are acceptable, as are all patterns. Nose leather and paw pad colors should complement the coat color.

How much does a Exotic Shorthair cat cost?

How big do Exotic Shorthair cats get?

The Average lifespan for Exotic Shorthair is 12-16 years.

Exotic Shorthair are short-haired cats. Therefore, they do not shed as much as long-haired cat breeds.