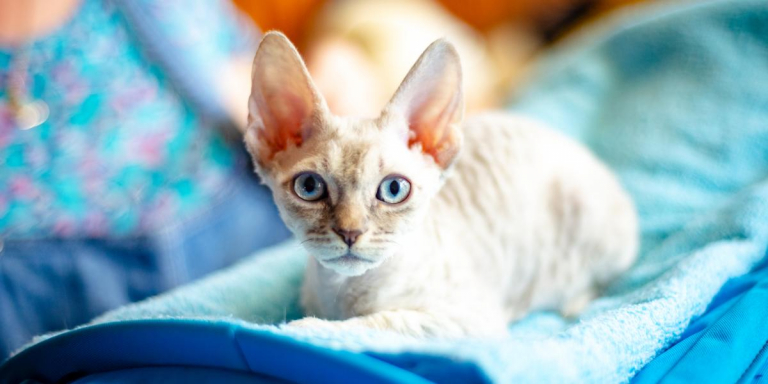 Temperament
? The breed’s dominant personality traits. While each individual has a unique personality, breed-specific genetics affect qualities like sociability, playfulness, and intelligence.
Playful, friendly, loyal, family-friendly
Origin
? Where this breed was first established.
Germany
Other Names
? In addition to their official names, most breeds earn a few nicknames.
Rex
Group
? Breeds are grouped by their size and coat type.
Small short-haired
Height
? The typical adult height among individuals of this breed. Height is measured from the top of the head to the bottom of the front paws.
10"-12"
Body Length
? The typical adult body length among individuals of this breed. A cat’s length is measured from the base of the tail to the tip of the nose.
12"-16"
Weight
? The typical adult weight range of this cat breed.
6-10 pounds
Life Expectancy
? The average lifespan of the breed. While life expectancy is fairly consistent across all cat breeds, some breeds tend to live shorter or longer than others.
12-15 years
Price
? The average price.
$500-$1,000
Affection Level
? Breeds with a high affection level want to give and receive a lot of attention, while less-affectionate breeds are not as interested in petting and snuggles.
0 100%
100%
Activity Level
? Breeds with high activity levels will engage more in active play and demand more space and attention.
0 100%
90%
Pet-Friendly
? How well the breed tends to get along with cats, dogs, and other pets.
0 100%
80%
Kid-Friendly
? Breeds with a higher rating in this area tend to be gentle and patient, while lower-rated breeds may feel uncomfortable with children.
0 100%
90%
Sociability
? Breeds with a higher sociability rating will want to spend time with you all day, while less-sociable breeds seldom seek out human interaction.
0 100%
90%
Intelligence
? Breeds with higher intelligence ratings are more curious, investigative, and easy to train. Less-intelligent breeds are less trainable but often laid-back and easygoing.
0 100%
90%
Playfulness
? Breeds that score higher in this area have strong hunting instincts that make them great playtime companions.
0 100%
90%
Independence
? Breeds that score higher in this area are able to spend hours alone, while less-independent breeds require plenty of attention.
0 100%
20%
Vocality
? A higher rating in this area indicates a breed prone to plenty of meowing and other vocalizations, while less-vocal breeds are happy to stay quiet.
0 100%
50%
Grooming
? Breeds with higher grooming scores require more maintenance like brushing and bathing, while lower-scored breeds are virtually maintenance-free.
0 100%
20%

About the German Rex Cat

If you've been searching for a highly intelligent cat, the German Rex might be the perfect breed for you. These cats are so smart that they've been nicknamed the "Einsteins of the cat world." This trait makes the German Rex a lot of fun to live with: This kitty takes very well to training, easily picking up new tricks and amusing family members with innovative antics.

Because German Rex cats are so intelligent, they require plenty of toys. Puzzle games are favorites, and they thrive with lots of interactive play using everything from bits of crumpled paper to feathered wands. Without adequate stimulation, these kitties can get into quite a bit of trouble, poking their noses into cabinets and showing you what gravity is all about by knocking cherished decorative objects off high shelves.

Some of the world's smartest cats can be a bit standoffish. Luckily, the German Rex is as affectionate as it is intellectual. These kitties live for attention from their favorite humans and they enjoy cuddling when they're not busy playing. They get along well with everyone in the family, including other cats and well- behaved dogs. 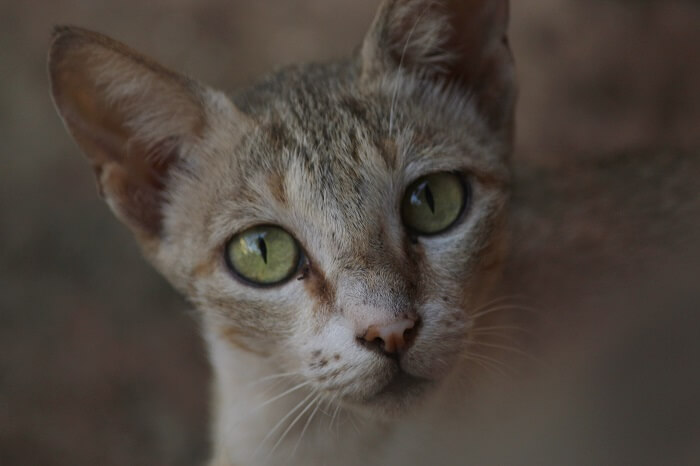 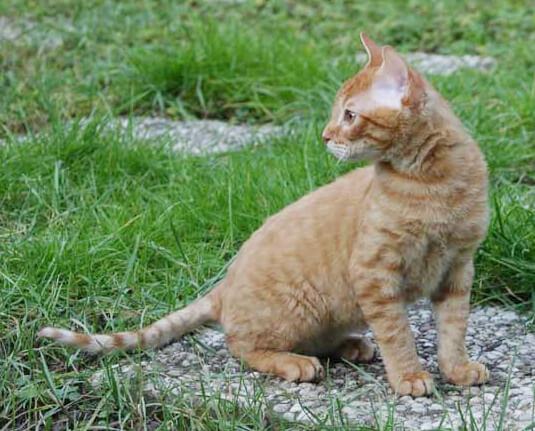 German Rex cats have no special nutritional needs, however they thrive when provided with a high- quality diet. If you aren't treating your German Rex to fresh food, look for a high-protein brand that includes real fish or meat as its first ingredient.

Most families find that their German Rex cat requires very little brushing. These unique kitties do require bathing on occasion, as excess oil can cause their fur to take on a greasy feel.

These frisky felines love to play and will appreciate the opportunity to show you their special skills as often as they can. They love to run, jump, and climb, so be sure to get the biggest, best cat tree you can find!

Cat scratchers and toys of all kinds will be appreciated as well. Interactive toys such as teaser wands and lasers help maximize your cat's activity level and prevent boredom.

German Rex cats are generally very healthy, with no known genetic disorders. Because they have such fine coats, they need to be kept indoors, where they can easily maintain the correct body temperature and enjoy protection from sun, wind, and wet, cold weather.

As the breed name suggests, the German Rex was developed in Germany. Shortly after the end of the second world war, a feral female cat was rescued from the ruins of East Berlin when Dr. R. Scheuer- Karpin found her wandering in the garden outside Hufeland Hospital. The cat's wavy black coat gave her the appearance of a little black lamb, so the rescuer named her Lammchen, which translates to Lambkin. In 1957, Lammchen was bred with one of her wavy haired offspring, creating the first litter of German Rex kittens.

In 1960, two German Rex females were imported into the United States. These females, named Jet and Marigold, were soon joined by a male German Rex cat named Christopher Columbus. These three individuals served as the foundation for the breed's expansion across America. 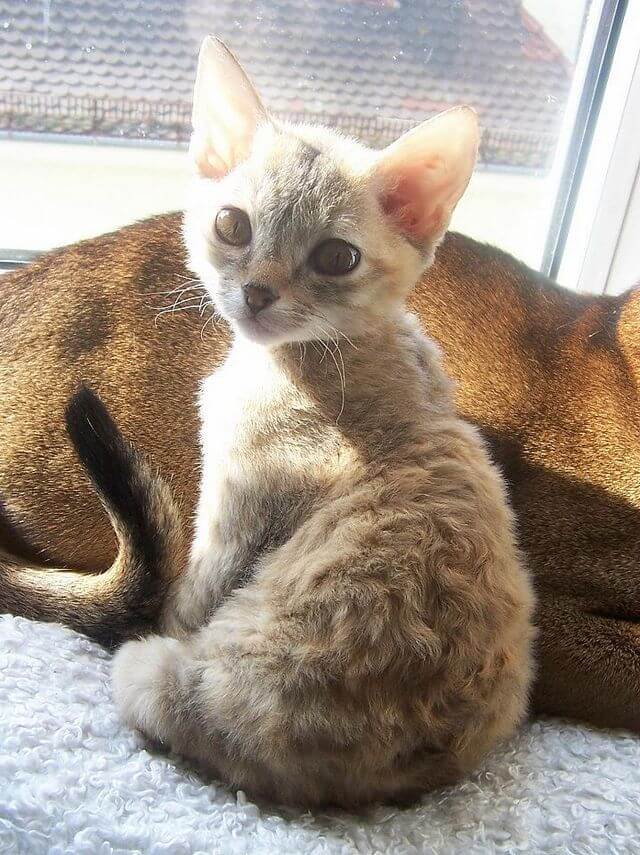 The German Rex is one of the world's rarest cat breeds. Count yourself fortunate if one of these uniquely beautiful cats makes its way into your life!

German Rex cats have no guard hairs on their coat; that's why they feel so soft to the touch.

Even though German Rex cats are small, weighing in at an average of 8 pounds apiece, they appear larger because their legs are so long. 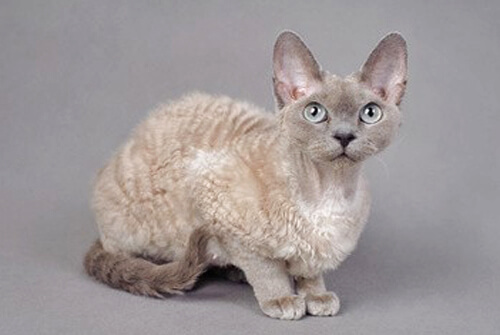 The eyes should be large and round, appearing luminous and a bit too big for the head. Eyes may be of any color that complements the coat.

The legs should be slim, athletic and very long in proportion to the body. The paws should be proportionate to the legs.

The tail should be of medium length, and should taper to a point.

The German Rex is a small to medium-sized cat, with fine bones and an athletic appearance. Maximum weight is about 8 pounds.

The head is round, with a strong chin and a pleasant, alert appearance. The hair on the head should be revealed curly, and the whiskers should be curled as well.

German Rex cats have large, prominent ears that should appear too big for their heads.

The German Rex cat has a unique, woolly coat with a curly appearance and a very soft, silky feel.

German Rex cats may be of any color or pattern.

How much does a German Rex cat cost?

How big do German Rex cats get?

German Rex cats tend to be small in size. A fully grown German Rex cat might weigh between 6-10 pounds or more and range in height anywhere from about 10"-12" inches tall.

The Average lifespan for German Rex is 12-15 years.

German Rex are short-haired cats. Therefore, they do not shed as much as long-haired cat breeds.