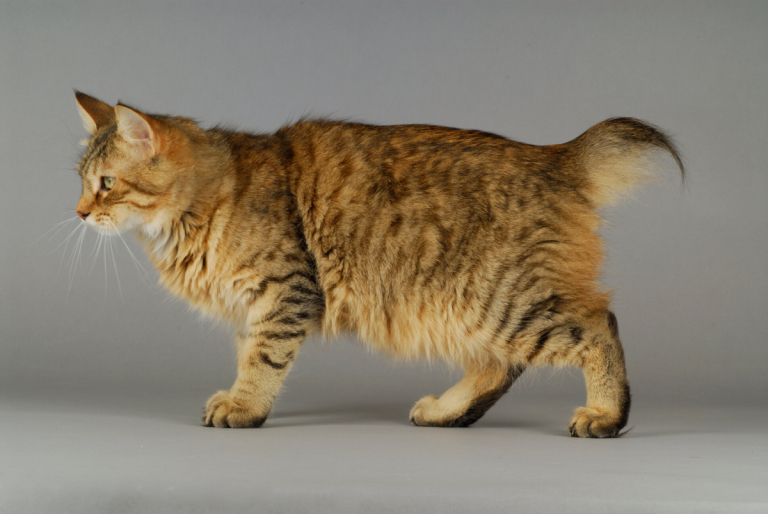 Temperament
? The breed’s dominant personality traits. While each individual has a unique personality, breed-specific genetics affect qualities like sociability, playfulness, and intelligence.
Sweet, sociable, affectionate, playful
Origin
? Where this breed was first established.
United States, Africa
Other Names
? In addition to their official names, most breeds earn a few nicknames.
Pixiebob cat
Group
? Breeds are grouped by their size and coat type.
Medium-to-large sized short-haired
Height
? The typical adult height among individuals of this breed. Height is measured from the top of the head to the bottom of the front paws.
10"-12"
Body Length
? The typical adult body length among individuals of this breed. A cat’s length is measured from the base of the tail to the tip of the nose.
16"-24"
Weight
? The typical adult weight range of this cat breed.
8-18 pounds
Life Expectancy
? The average lifespan of the breed. While life expectancy is fairly consistent across all cat breeds, some breeds tend to live shorter or longer than others.
13-16 years
Price
? The average price.
$1800 - $3000
Affection Level
? Breeds with a high affection level want to give and receive a lot of attention, while less-affectionate breeds are not as interested in petting and snuggles.
0 100%
100%
Activity Level
? Breeds with high activity levels will engage more in active play and demand more space and attention.
0 100%
80%
Pet-Friendly
? How well the breed tends to get along with cats, dogs, and other pets.
0 100%
100%
Kid-Friendly
? Breeds with a higher rating in this area tend to be gentle and patient, while lower-rated breeds may feel uncomfortable with children.
0 100%
80%
Sociability
? Breeds with a higher sociability rating will want to spend time with you all day, while less-sociable breeds seldom seek out human interaction.
0 100%
80%
Intelligence
? Breeds with higher intelligence ratings are more curious, investigative, and easy to train. Less-intelligent breeds are less trainable but often laid-back and easygoing.
0 100%
100%
Playfulness
? Breeds that score higher in this area have strong hunting instincts that make them great playtime companions.
0 100%
80%
Independence
? Breeds that score higher in this area are able to spend hours alone, while less-independent breeds require plenty of attention.
0 100%
80%
Vocality
? A higher rating in this area indicates a breed prone to plenty of meowing and other vocalizations, while less-vocal breeds are happy to stay quiet.
0 100%
20%
Grooming
? Breeds with higher grooming scores require more maintenance like brushing and bathing, while lower-scored breeds are virtually maintenance-free.
0 100%
60%

About the Pixie-Bob Cat

With a short tail and a wild appearance, the Pixie-Bob cat is certain to captivate your imagination while simultaneously capturing your heart. Even though these cats appear exotic, they are now 100% domestic: DNA testing has shown that contemporary Pixie-Bob cats have no wild bobcat blood.

Pixie-Bob cats are extremely friendly and sweet natured, with a fondness for all family members including kids, other cats, and well-behaved dogs. Speaking of dogs, many families who count Pixie-Bob cats as members compare them to canines in terms of personality. These kitties are loyal to a fault, and some of their favorite games are similar to the ones dogs enjoy. For example, Pixie-Bob cats love to play fetch, they enjoy walking on leashes once they learn how, and unlike most cats, they have a tendency to appreciate the opportunity to ride in the car alongside their family members.

If you're looking for a big, playful cat with an unusual appearance and an outstanding personality, the Pixie-Bob may be the companion you've been searching for. 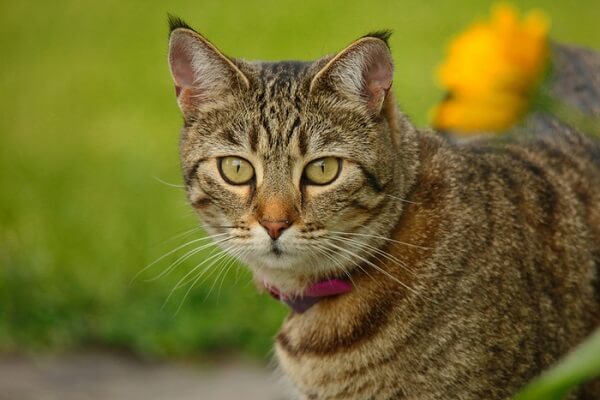 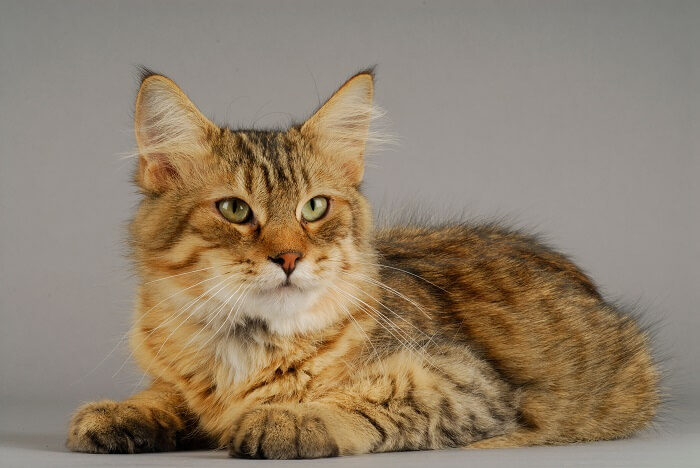 Pixie-Bob cats can be quite large, meaning they often need more calories than the average cat. These kitties thrive on a high-quality diet that's high in protein and low in carbohydrates, with real meat or fish as the primary ingredient.

Pixie-Bob cats tend to have thick, luxurious coats. While they take care of daily grooming on their own, these kitties benefit from once or twice weekly brushing sessions aimed at removing loose hair that can contribute to hairballs and contribute to excess shed fur on your furniture and clothing.

You might want to teach your cat to accept toothbrushing from a young age, and you may also wish to teach them how to have their nails clipped. Regular nail clipping will save your furniture, your clothing, and your skin. Even though these cats don't mean to cause damage, their size and high level of activity mean that accidents are likely to happen. Regular nail trimming is a big help.

Even though Pixie-Bob cats have a strong appreciation for comfortable beds and naptime, they spend their waking hours engaged in physical activity aimed at keeping you entertained while satisfying their natural urge to run, jump, and climb. It's important to provide plenty of enrichment for these cats. Even if you can't build a catio outdoors, you'll want to provide your Pixie-Bob cat with at least one big, strong cat tower that's equipped with a large platform on top.

You'll also want to provide scratching posts and an ample supply of toys. Focus on toys that satisfy your cat's curious nature as well as those that are durable enough to withstand a big cat's undivided attention.

Pixie-Bob cats typically enjoy good health. Some males have cryptorchidism – an issue that can be resolved with surgical neutering, but that renders a cat unsuitable for showing as an intact male.

These kitties are naturally big, however if they become lazy, they can be prone to obesity. It's very important to provide opportunities to exercise and to ensure that the diet contains no excess fillers and promotes good health.

As rumor has it, the Pixie-Bob cat breed got its start when a barn cat and a coastal bobcat had a litter of kittens together. Even though today's Pixie-Bob cats have no while Bobcat DNA, their size suggests that there might be something to this old story.

The first records of Pixie-Bob cats come from Carol Ann Brewer of Mount Baker, Washington. In 1985, she bought a male cat with a short tail, a spotted coat, and polydactyl paws. The following January, she rescued a starving male cat that weighed in at 17 pounds even though it was skin and bones. This cat, named Keba, also had a bobtail and was rumored to have been produced as a result of a meeting between a domestic female cat and a male Bobcat.

Keba mated with a neighbor's brown tabby female cat and in April 1986, that Queen had kittens. Brewer One of the females and named her "Pixie." The following year, Pixie became a founding member of the Pixie-Bob breed.

For the next few years, Brewer searched for cats that were believed to be the result of naturally occurring meetings between domestic cats and wild bobcats. She added 23 of them to her breeding program in all, using the term "Legend cats" as a trademark. Other breeders joined the effort, collaborating with Brewer to form a broad genetic pool. Eventually, today's Pixie-Bob breed was fully developed.

Carol Ann Brewer led efforts to register the new breed. The International Cat Association granted recognition in 1993 as part of the exhibition category. In 1996, TICA granted new breed and color status. In 1998, the Pixie-Bob cat was finally granted championship status. 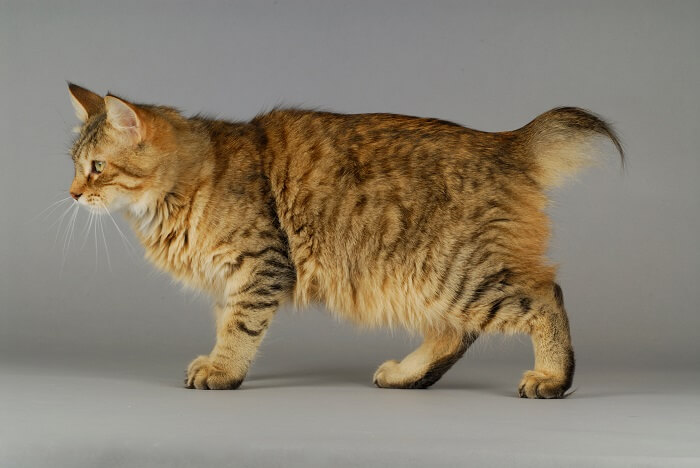 Most Pixie-Bob cats do not meow; instead, they make chirping and chattering noises as well as occasional growls.

Pixie-Bob cats are highly trainable, and have the ability to learn words and phrases. With positive reinforcement, it is possible to teach a Pixie-Bob cat a variety of behaviors.

Even though Pixie-Bob cats are likely to have come from pairings between domestic cats and wildcats, the lack of wild bobcat DNA means that ownership is not restricted as it is with exotic wild cats. 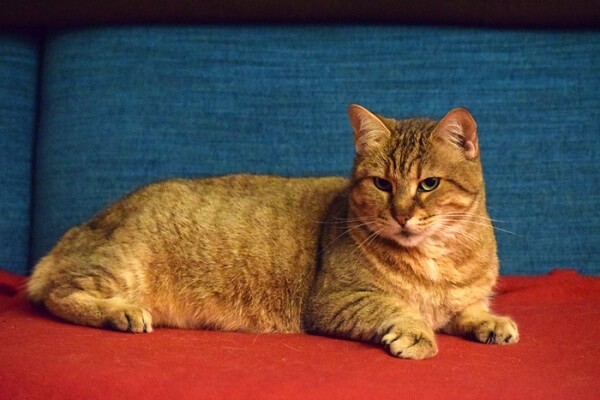 The tail should be a minimum of 2 inches long, and may not be longer than hock length. Kinks and curls are accepted.

Pixiebob cats should be medium to large in size, with prominent shoulderblades and a slight upward slope from shoulder to hip. The chest should be broad and a primordial belly pouch may be evident.

The head should be medium to large, forming an inverted pear shape. The chin should align with the nose and the muzzle should be full, with a definite whisker break and fleshy whisker pads. The nose should be wide and slightly convex with a slight nose bump and large brick-colored nose leather.

The Pixiebob cat’s ears should be of medium height, with wide, deep bases. They should be positioned as much on the sides of the head as the top, and should display rounded tips. Lynx tipping is desirable, and is more prominent in longhair cats. The ears should have thumbprint markings on their backs.

A Pixiebob cat’s coat may be short or medium length, with longer belly hair. The texture shold be soft to semi-dense depending on length.

Pixie Bob cats may be of any shade of brown spotted tabby, with a white or cream band surrounding the eye and mascara markings that extend from the outer eye corner down to the cheek. The coat should display small to medium spots that are muted by ticking. The belly must display spots.

How much does a Pixie-Bob cat cost?

How big do Pixie-Bob cats get?

Pixie-Bob cats tend to be medium in size. A fully grown Pixie-Bob cat might weigh between 8-18 pounds or more and range in height anywhere from about 10"-12" inches tall.

How long do Pixie-Bob cats live?

The Average lifespan for Pixie-Bob is 13-16 years.

Pixie-Bob are short-haired cats. Therefore, they do not shed as much as long-haired cat breeds.