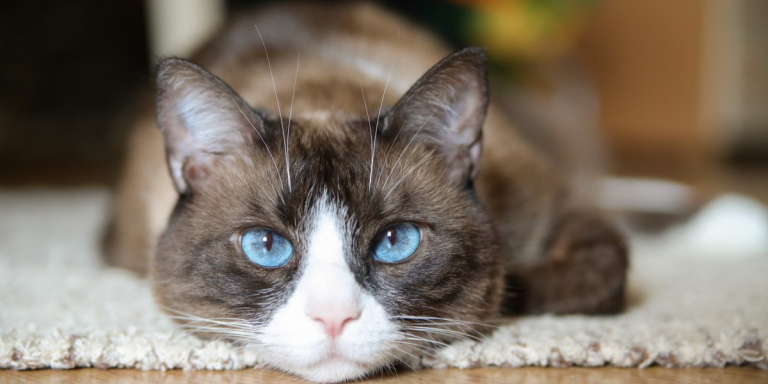 Temperament
? The breed’s dominant personality traits. While each individual has a unique personality, breed-specific genetics affect qualities like sociability, playfulness, and intelligence.
Loving, curious, family-oriented, vocal
Origin
? Where this breed was first established.
United States
Other Names
? In addition to their official names, most breeds earn a few nicknames.
Silver Lace, American longhair
Group
? Breeds are grouped by their size and coat type.
Medium to large short-haired
Height
? The typical adult height among individuals of this breed. Height is measured from the top of the head to the bottom of the front paws.
9"- 11"
Body Length
? The typical adult body length among individuals of this breed. A cat’s length is measured from the base of the tail to the tip of the nose.
12"-18"
Weight
? The typical adult weight range of this cat breed.
6-12 pounds
Life Expectancy
? The average lifespan of the breed. While life expectancy is fairly consistent across all cat breeds, some breeds tend to live shorter or longer than others.
14-19 years
Price
? The average price.
$600 - $1200
Affection Level
? Breeds with a high affection level want to give and receive a lot of attention, while less-affectionate breeds are not as interested in petting and snuggles.
0 100%
100%
Activity Level
? Breeds with high activity levels will engage more in active play and demand more space and attention.
0 100%
80%
Pet-Friendly
? How well the breed tends to get along with cats, dogs, and other pets.
0 100%
80%
Kid-Friendly
? Breeds with a higher rating in this area tend to be gentle and patient, while lower-rated breeds may feel uncomfortable with children.
0 100%
80%
Sociability
? Breeds with a higher sociability rating will want to spend time with you all day, while less-sociable breeds seldom seek out human interaction.
0 100%
80%
Intelligence
? Breeds with higher intelligence ratings are more curious, investigative, and easy to train. Less-intelligent breeds are less trainable but often laid-back and easygoing.
0 100%
80%
Playfulness
? Breeds that score higher in this area have strong hunting instincts that make them great playtime companions.
0 100%
100%
Independence
? Breeds that score higher in this area are able to spend hours alone, while less-independent breeds require plenty of attention.
0 100%
80%
Vocality
? A higher rating in this area indicates a breed prone to plenty of meowing and other vocalizations, while less-vocal breeds are happy to stay quiet.
0 100%
80%
Grooming
? Breeds with higher grooming scores require more maintenance like brushing and bathing, while lower-scored breeds are virtually maintenance-free.
0 100%
60%

About the Snowshoe Cat

Adorable white feet give the Snowshoe cat its name, and distinctive white markings in the shape of an upside down “V” adorn its muzzle. Cuteness isn't the only thing that makes the Snowshoe such a wonderful cat: This breed absolutely loves people. In fact, Snowshoes are among the friendliest cats! While they do have a tendency to choose one person as their absolute favorite, they like everyone and readily make friends with new people shortly after being introduced.

Expect lots of fun and games if you bring a Snowshoe cat into your family. These kitties are curious and playful, and they like nothing quite so much as spending plenty of quality time with their favorite people. They'll help you with all sorts of tasks from typing to cleaning and when it's time to cook dinner or wash dishes, they happily provide advice from a nearby vantage point - perhaps a high place like the top of the refrigerator.

Snowshoe cats are expert cuddlers, too. If you have room on your lap, they'll take advantage of the opportunity to curl up for a movie or a bit of reading. At bedtime, they're likely to stretch out beside you, perhaps sliding under the covers or sharing your pillow.

Just like other breeds with lots of Siamese in their background, the Snowshoe cat requires lots of attention and becomes terribly unhappy if left alone for long periods of time. If boredom sets in, these kitties may develop unwanted behaviors and vocalize loudly. Fortunately, Snowshoe cats get along very well with other felines. If your family can't always be around, a second cat can help prevent loneliness and the destructive habits that can come with it.

Thanks to their outgoing, agreeable personalities, Snowshoe cats can be a great fit for any family with lots of love and attention to give. 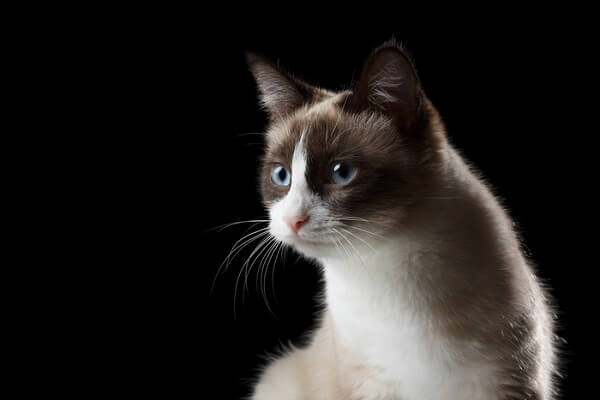 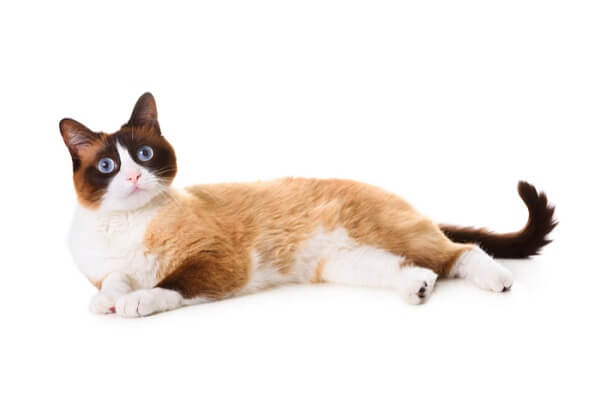 Snowshoe cats don't have any special nutritional needs, however they are known for exceptional longevity when their families prioritize good health and proper nutrition. We recommend offering your Snowshoe cat a high-quality, age-appropriate diet with plenty of protein and low levels of carbohydrates. This can help prevent obesity, which is a common health issue in older Snowshoe cats.

Snowshoe cats doing excellent job of looking after their own coats, which are typically very short and low-shedding. Occasional brushing can help remove any loose hair that might otherwise end up on furniture and clothing.

Because Snowshoes are prone to dental issues, it's a very good idea to teach your cat how to have their teeth brushed from a young age. Routine at-home dental care is a great habit that can help your cat enjoy better health overall.

Last but not least, consider keeping your Snowshoe cat's claws clipped. Toenail trimming is the easiest way to preserve your furniture, which these active cats are likely to jump on.

Snowshoe cats are highly active, with lots of energy to burn, particularly in their younger years. They love interactive play, either with their human family members or with other pets, and they appreciate toys of all kinds. These cats are perfectly capable of making their own fun when given a crinkly paper bag or a big empty box, and they love climbing cat towers, perching on window seats, and stretching out with the help of tall scratching posts.

Just like other highly sociable cat breeds, Snowshoes often enjoy leashed walks through the neighborhood. It takes some time and effort to teach a cat how to walk on a leash, but this is fantastic exercise that your Snowshoe will benefit from for life.

Snowshoe cats are generally healthy, however they can suffer from some of the same problems that plague Siamese cats including hypertrophic cardiomyopathy, autosomal dominant polycystic kidney disease, and periodontal disease. These issues aren't common, however they are worth watching for.

Like Siamese, some Snowshoe cats have crossed eyes and kinks in their tails. Crossed eyes can have a negative effect on peripheral vision, however neither of these issues is painful or shortens the cat's lifespan.

Even though the Snowshoe cat breed wasn't officially developed until the middle of the 20th century, Siamese kittens with white feet and white markings on their muzzles have occurred naturally for as long as the breed has been part of human history.

In the 1960s, Dorothy Hinds-Daugherty, a Siamese breeder in Philadelphia noticed that three kittens – all from the same litter – developed Snowshoe markings instead of solid color points. Since white feet are not acceptable according to the Siamese breed standard, she decided to begin a brand-new line. Thus, the Snowshoe cat breed began.

When the white-footed kittens reached maturity, they were crossed with American Shorthair cats with tuxedo markings. At first, the resulting kittens were called Silver Lace cats. Others, including cat breeder Vikki Olander took notice, and the white markings which were originally viewed as Siamese faults became the hallmarks of a wonderful new breed that combines all the best traits of its founding members.

The American Cat Fanciers Association (ACFA) accepted the Snowshoe in 1982 and granted championship status in 1990. The International Cat Association (TICA) granted Snowshoe cats official recognition in 1993. In the UK, Snowshoe cats attained full breed status with The Governing Council of the Cat Fancy (GCCF) in 2013.

Today, the Snowshoe cat breed enjoys recognition worldwide. Show quality examples of the Snowshoe cat breed are relatively rare since it can be difficult to produce kittens that carry the recessive genes for both colorpoint and the piebald pattern that gives Snowshoes their distinctive appearance. It's easier to find pet quality Snowshoe cats with either too much or too little light to qualify for showing. 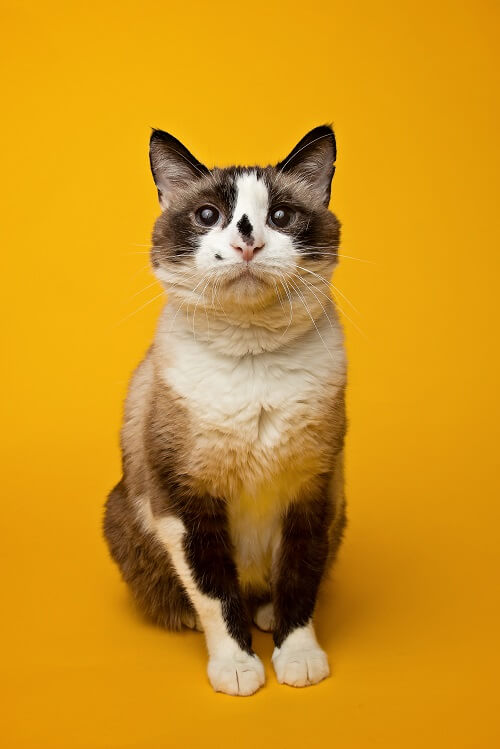 Snowshoe cats are born all white and begin developing their color points at a few weeks of age.

Snowshoe cats are one of the few breeds with a fondness for water. These kitties typically jump at the opportunity to get their paws wet and will often join their people in the shower. 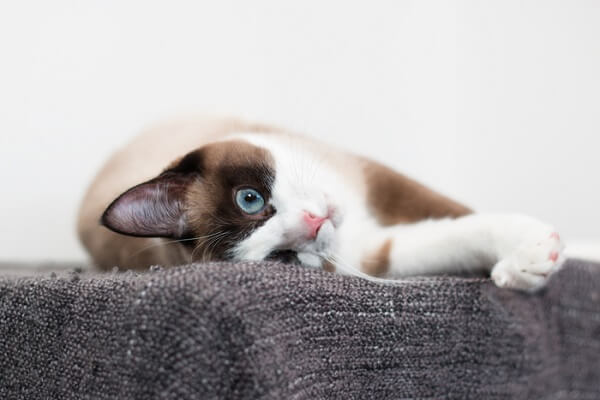 A Snowshoe cat should have walnut-shaped eyes that are set one eye’s width apart. All Snowshoe cats have blue eyes, with deeper colors being preferable.

The legs should be slender and well-proportioned to the body. The paws should be medium-sized ovals. The extent of white color on the Snowshoe cat’s paws should be similar on both front feet and both hind feet.

The tail should be of medium to long length, with a medium base and a gentle taper toward the tip.

The body should be long and lean, powerful but not bulky. This cat should feel heavy for its size.

The head should be wedge-shaped with high cheekbones and a straight nose. The muzzle should be of good length, without excessive broadness or square lines. Snowshoe cats should display an inverted white "V" on the muzzle, which may be prominent or so faint that it's difficult to see.

The ears should be medium to medium-large in size, with wide bases, slightly rounded tips, and positioning that continues the head’s wedge profile.

The coat should be medium-short, with no noticeable undercoat. It should feel dense and resilient, and should appear glossy and smooth.

All Snowshoe cats should have four white paws that contrast with the cat’s colored points, which are usually seal or blue. The cat may exhibit no more than ⅓ white on its body overall. White may extend to include a bib, white legs, a white tummy, and an inverted V on the face that extends from the bridge of the nose across the whisker pads and down to the chin. The chin should be white as well. Depending on registry, colorpoint snowshoe cats, bi-color snowshoes, and high white or harlequin snowshoe cats might be considered suitable for show. Longhaired Snowshoe cats might be accepted for show but are typically not considered suitable for breeding.

How much does a Snowshoe cat cost?

How big do Snowshoe cats get?

Snowshoe cats tend to be medium in size. A fully grown Snowshoe cat might weigh between 6-12 pounds or more and range in height anywhere from about 9"- 11" inches tall.

How long do Snowshoe cats live?

The Average lifespan for Snowshoe is 14-19 years.

Snowshoe are short-haired cats. Therefore, they do not shed as much as long-haired cat breeds.