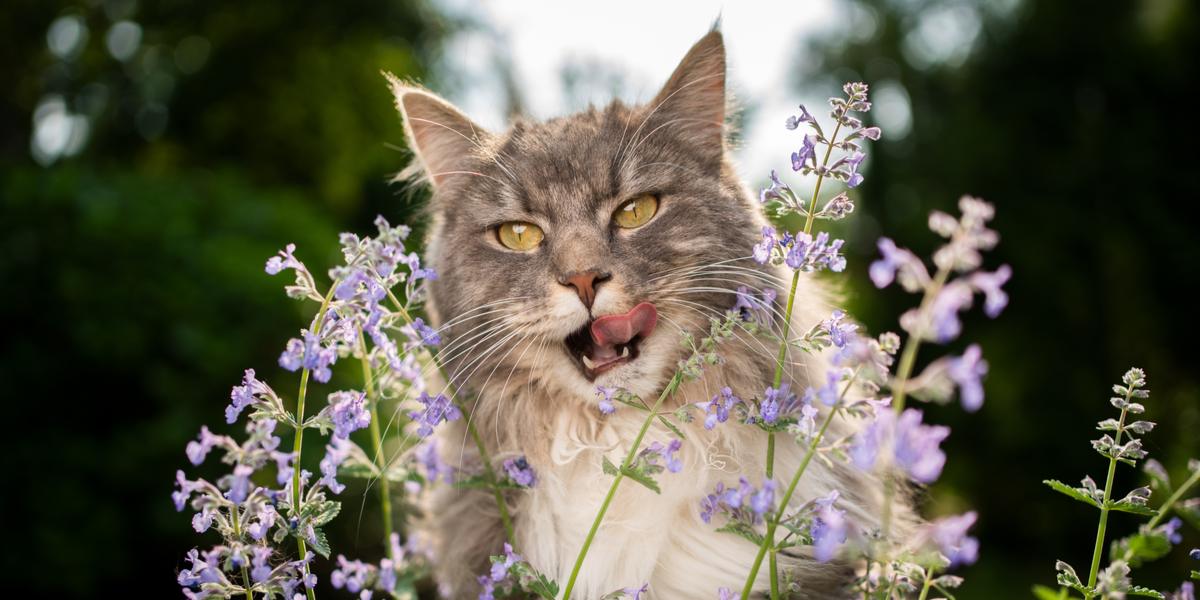 As the only recreational drug for cats, catnip (nepeta cataria) is a uniquely stimulating plant that’s almost as puzzling as cats themselves.

Between 67% and 80% of the adult feline population is sensitive to catnip.

Sensitive cats react to catnip by going a bit crazy—rolling around on the floor, licking up as much ‘nip as they can, rubbing their heads in the catnip, and frisking around the room. Some cats start drooling. Others get agitated and violent. 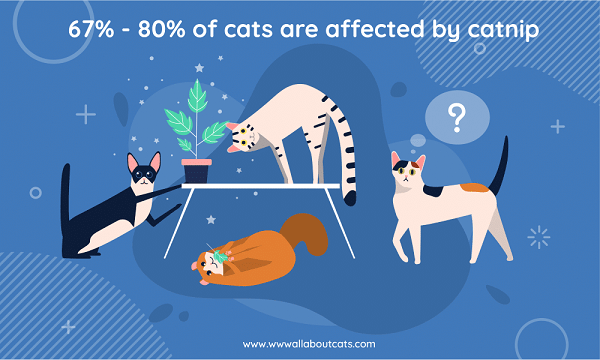 Both small and big cats react to catnip. Lions, tigers, leopards, and other big cats exhibit all the same reactions to the herb. But while the experience is widespread among all types of cats, they’re the only animals that get this much buzz out of catnip.

For the rest of us, it’s anything between a repellent and a mild sedative. Brewed into a tea, smoked, or mixed into treats, catnip and catmint are soothing to humans, dogs, and other animals. And if you’re not excited by stimulated cats or chilled-out humans, you might like knowing that the active compound in catnip is a mosquito repellent more powerful than DEET.

Whether you’re watching a cat in the middle of a catnip high or studying the secrets hidden within the ‘nip itself, the dynamic between the plant and the feline is a constant source of fascination.

In this article, we’ll dig deeper into the mysterious ways of catnip, discovering what it is, how it affects cats, and how you can get started with catnip yourself.

How Does Catnip Work? 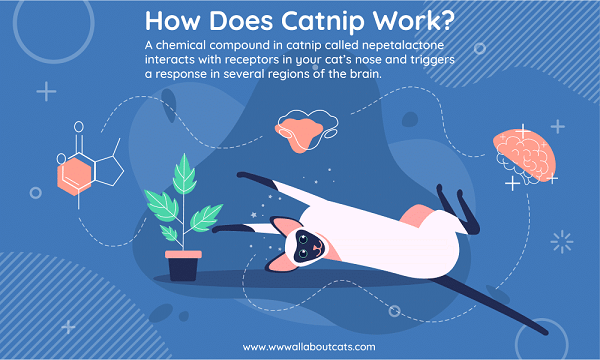 To understand how catnip affects your cat, we have to take a closer look at two things—what catnip is composed of and what makes your cat tick. 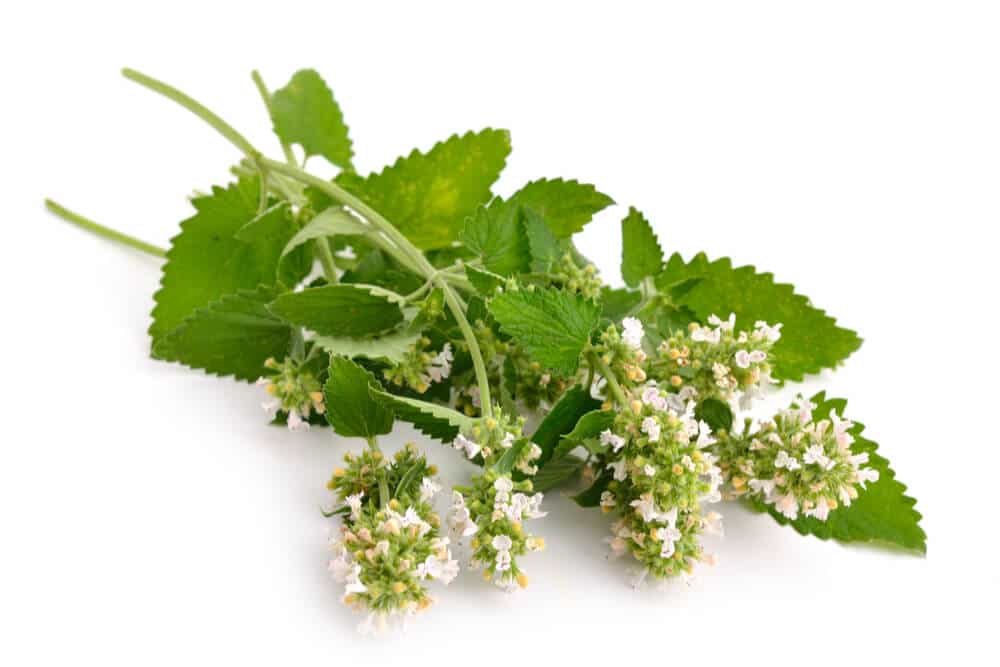 The catnip plant resembles other members of the mint family, bearing pointed, serrated leaves and white or lavender blossoms.

When you look at a catnip plant, your first impression is of a weedy green perennial herb, sometimes topped with a bundle of white or lavender blossoms. Branching off the stalk are serrated leaves that look like softer, dustier sprigs of lemon balm.

The plant is a member of the mint family (Lamiaceae) and is easily mistaken for lemon balm, catmint, and peppermint.

What makes it different from these plants is something you can’t see—a chemical compound called nepetalactone.

Secreted in fragile microscopic bulbs coating the plant’s leaves, stems, and seed pods, nepetalactone constitutes between 70% and 99% of the essential oil in catnip. 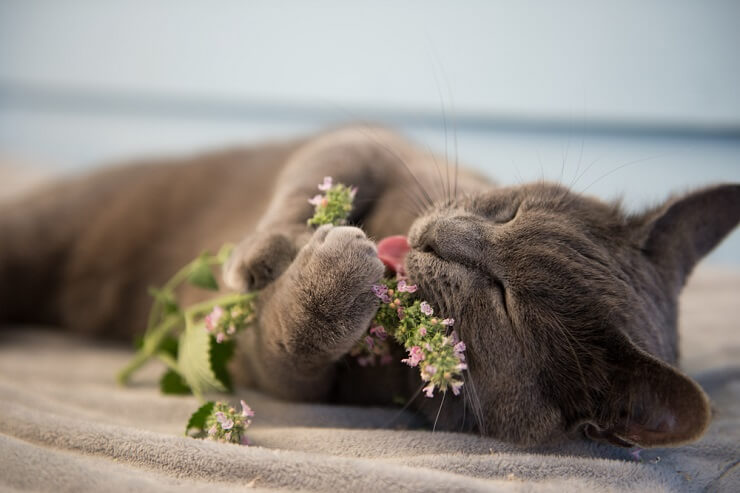 When those tiny bulbs rupture, nepetalactone molecules float off of the catnip plant and get inside of your cat’s nose. From there, they bind to protein receptors, which stimulate sensory neurons that reach out to other neurons located in the olfactory bulb. The olfactory bulb is a nervous structure in your cat’s brain that acts as a processing center for smells.

The olfactory bulb projects this odor information to several regions of the brain, including the two neuronal clusters called the amygdala. This gland controls behavioral responses to stimuli. In other words, the amygdala gets the message that it’s time to rev up the emotional response and get the body moving.

Meanwhile, the olfactory gland also projects to the hypothalamus or “master gland” of the brain, which controls just about everything in the body. It appears that the hypothalamus interprets the nepetalactone of catnip as something very similar to feline sexual pheromones, regulating the response through the pituitary gland and triggering a behavioral response.

What Does Catnip Do To Cats? 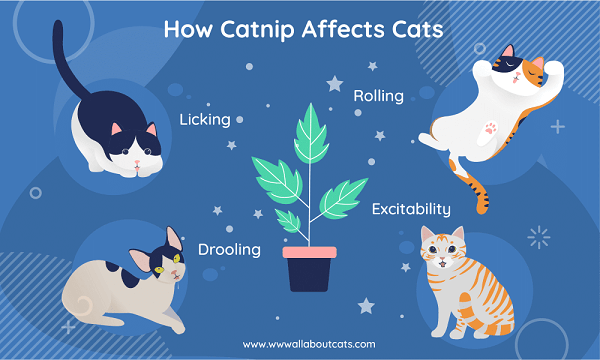 Regardless of sex, affected cats start acting a lot like females in heat—with a twist.

You’ll notice estrus-esque behaviors like rolling around on the floor, frenzied cheek rubbing, purring, and vocalizing. In addition to these behaviors, cats become generally excitable, chasing invisible mice, and frisking around the house.

How Long Do the Effects of Catnip Last on Your Cat? 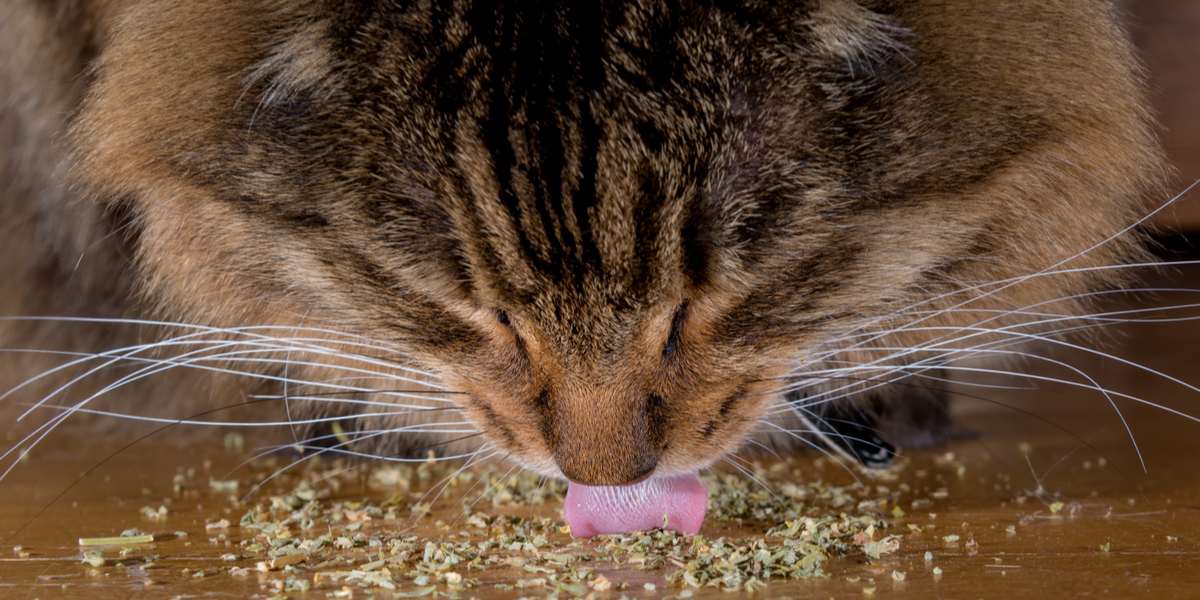 The effect lasts for 5-15 minutes and then it fades away, leaving your cat catnipped-out for up to two hours. During that time, cats lose their sensitivity to catnip and need some time for the immunity to wear off.

So, since it appears that catnip causes something of an emotional response similar to those created by feline pheromones, is it some kind of plant-derived pseudo-pheromone?

Unlike pheromones, the volatile oils in catnip only affect cats through the nose. Cats don’t pick up nepetalactone with their Jacobson’s organ—also known as the vomeronasal organ—located on the roof of their mouth. It’s a nose-driven experience.

Though cats often eat catnip when they’re in the middle of high, ingested catnip doesn’t have the same effect. When cats eat catnip, they experience it roughly the same way we do when we eat it or brew it into a tea—they may feel a mild sedative effect.

We can’t say exactly what cats are experiencing when they smell catnip. In the scientific community, there’s no consensus on exactly why catnip affects cats. 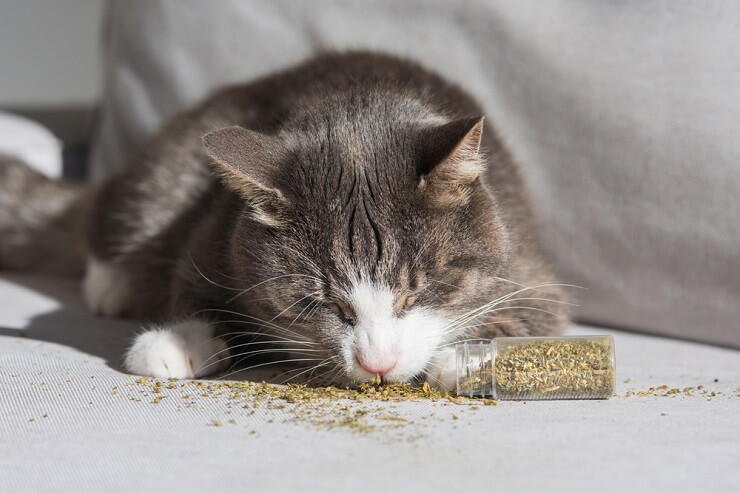 For all of its euphoric effects, it’s about as healthy as a drug can be. Catnip is safe, impossible to overdose, and non-addictive. Cats of all ages can try it, but only adult cats have the wiring to experience a high. Most cats develop their interest in catnip around the time they reach sexual maturity (6 to 8 months old).

What Are The Benefits Of Catnip? 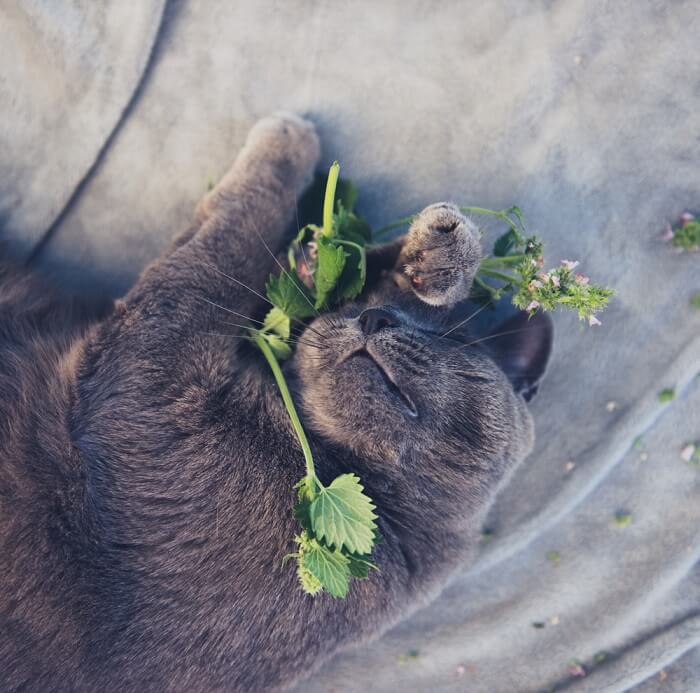 Whether your cat’s nibbling it fresh or rolling around in a pile of dried buds, catnip can be beneficial to their health.

When eaten, catnip can help stressed-out cats to relax and feel a bit calmer, and when inhaled, the active components of catnip encourage your cat to play. Frisking, pouncing, and other forms of play act also as powerful stress relievers.

When sprinkled or spritzed on a new scratching post or bed, catnip can help to encourage your cat to visit and use the designated object. Paired with a gentle deterrent, this kind of positive direction is an effective way to change your cat’s patterns without harm or stress.

Alternatives To Catnip For Cats 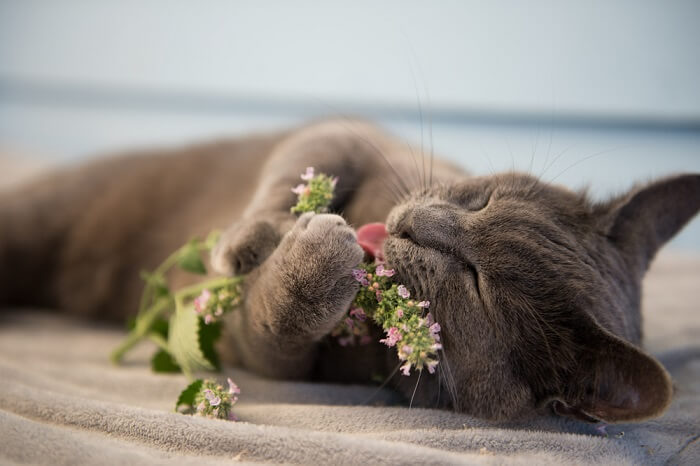 What if your cat is one of the roughly 1/3 of the feline population who doesn’t react to catnip? You have a few alternatives. While silvervine is the most promising catnip alternative, you can also try valerian root, Tartarian honeysuckle, and other varieties of catmint.

Though catnip gets more press, silvervine—also known as matatabi—is a potent alternative. This native of China and Japan is a species of kiwifruit from the Actinidiaceae family.

Instead of nepetalactone, silvervine contains high concentrations of a chemical called actinidine. Actinidine triggers a reaction similar to nepetalactone, but it appears to affect a larger percentage of cats. According to a study published in BMC Veterinary Research, almost 80% of cats in a 100-cat group reacted to silvervine, including 75% of the cats who didn’t get anything out of catnip.

Silvervine also causes a longer high. While catnip wears off after 5-15 minutes, a silvervine frenzy can last for up to 30 minutes.

Like catnip, silvervine is safe for cats and the fun comes side-effect-free. If your cat is part of the population that doesn’t get anything out of a dose of catnip, think about trying silvervine instead.

Valerian root is a flowering perennial perhaps best known for its soothing properties. It’s also moderately stimulating for cats, triggering a reaction in about 47% of cats. And just as valerian can help to relieve insomnia and anxiety in people, this plant can help kitties to relax once the high comes to an end.

Tatarian honeysuckle is a flowering shrub that, like catnip, contains the monoterpenoid nepetalactone. Its wood triggers catnip-like reactions in about 50% of cats. While even catnip-sensitive cats don’t start reacting to the plant until they’re about 6 months old, it appears that cats of all ages can get a buzz out of this honeysuckle species.

Other Types of Catmint

Of the Nepeta species, nepeta cataria has the highest concentration of nepetalactone and the most powerful effects, but catmint varieties like Blue Wonder, Persian, and Faassen’s catmint can also trigger a reaction.

How To Give Your Cat Catnip 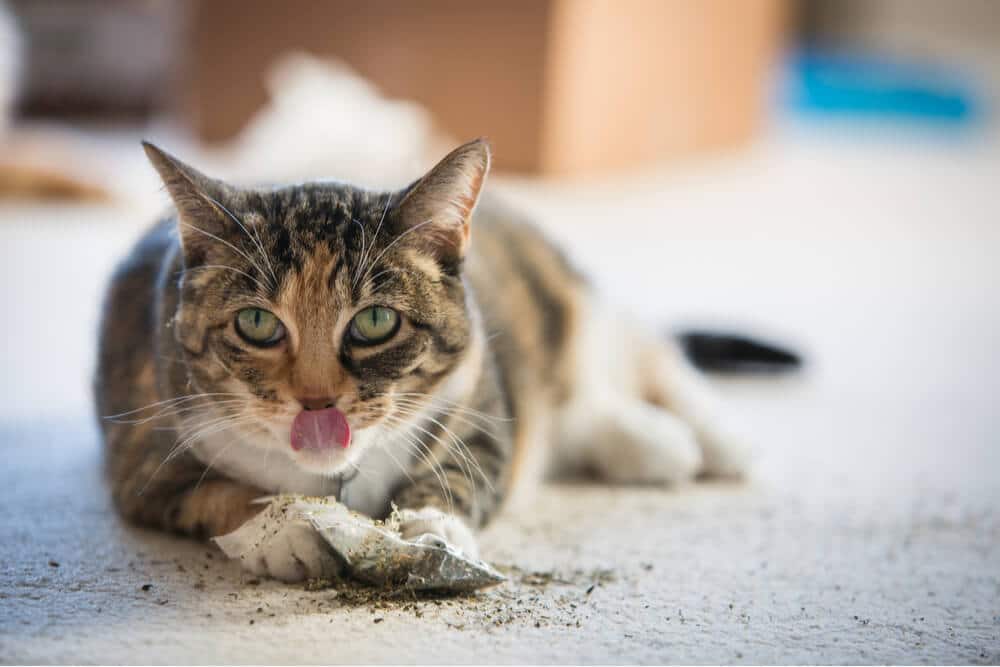 Catnip is available in a variety of formats, including dried catnip, catnip-stuffed toys, and catnip sprays.

Giving your cat catnip is simple. If you’re using catnip leaves or a toy, pinch and massage it before giving it to your cat. This helps to warm things up, burst the surface bulbs, and release the catnip’s volatile oils. If you’re using a spray, no preparation is necessary. Just spritz it on your chosen area.

Catnip lasts longest if stored in an air-tight container in a dark, cool area. If you have freezer space and want to maximize the longevity of your catnip, place your sealed containers of catnip in the freezer and thaw them out when you’re ready for some fun.

Here Are A Few Of The Types Of Catnip You Can Give Your Cat. 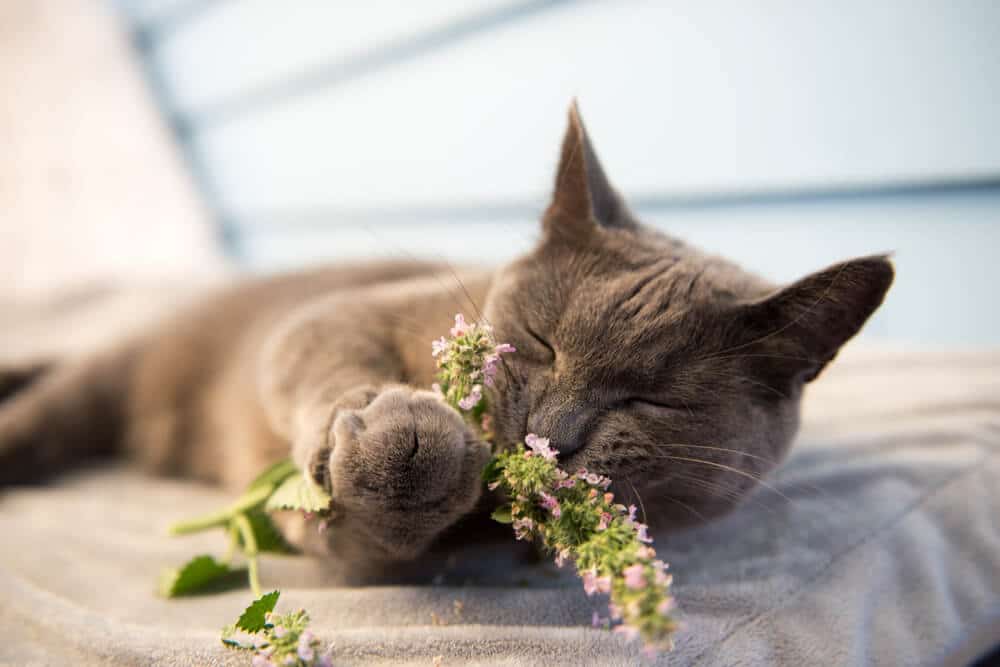 Catnip is always the same herb, but it comes in a few formats. Here are a few of the options available.

You can also buy dried catnip just about anywhere you can buy cat food. Potency varies from product to product, with lower-quality catnip products containing too much stem and not enough bud.

Catnip toys are also available, giving your cat something to kick, drool on, and bat around while he’s buzzing.

You can also use catnip sprays, which are a less messy alternative to catnip leaves scattered on the floor. Catnip spray is useful for refreshing catnip toys and can help to get your cat interested in new furniture like scratching posts, beds, and trees.

If you like the idea of a fresh plant, think about growing catnip in your home garden. It’s a perennial plant that’s hardy and easy to grow in a range of climates. Pick and dry the catnip as needed. Though cats react to both fresh and dry catnip, dehydrated catnip is more potent and easier to store for the long-term.

How Much Catnip Should You Give a Cat?

A little bit of catnip goes a long way—just a teaspoon of dried catnip is enough to induce a full response. And just as there’s no clear minimum dose at which the effects begin, there’s no solidly-defined limit to how much catnip you can give a cat. However, cats who eat too much of it may experience GI distress due to the plant’s high fiber content.

Remember that a cat’s response doesn’t increase in proportion to how much catnip they’re given, so it’s best to start small and monitor your cat’s reaction. If your cat licks up all of the catnip and still seems to want more, you might want to drop an extra teaspoon or so. If you’re left with a mess of unused catnip, try dialing it back a little bit.

Remember that exposure to leftover catnip may decrease your cat’s sensitivity to it, so it’s best to clean up afterward to make sure your next session is just as fun as the last. 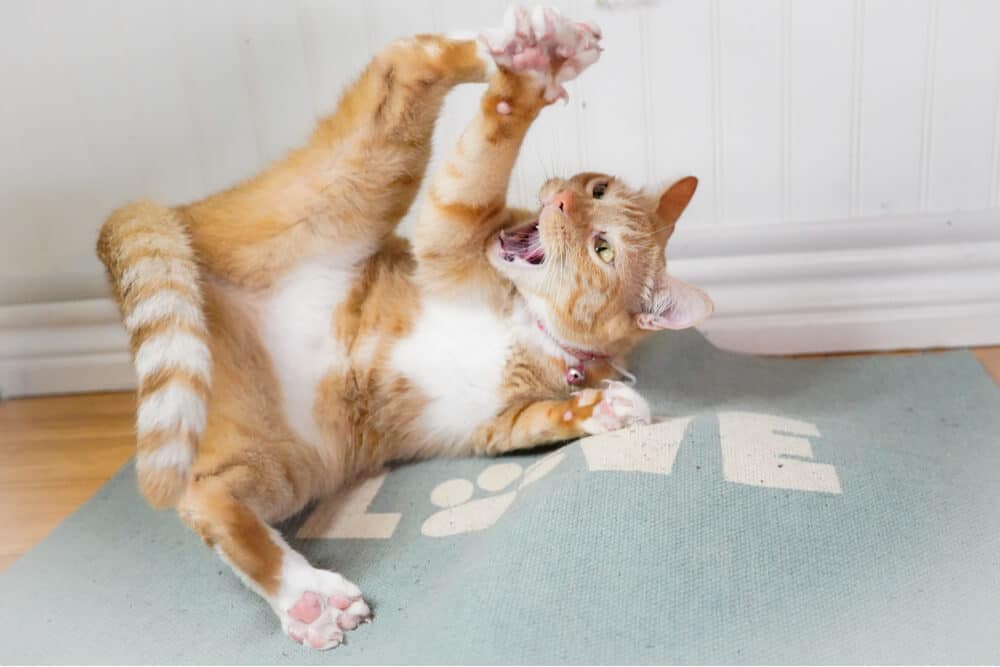 While we can go into more depth on how the compounds in catnip interact with your cat’s brain, we can’t answer exactly why one species—catnip—has such an intense effect on so many members of another species.  It’s a mystery as intriguing and enchanting as our cats themselves.

5 thoughts on “What Does Catnip Do To Cats & Why Cats Like It?”