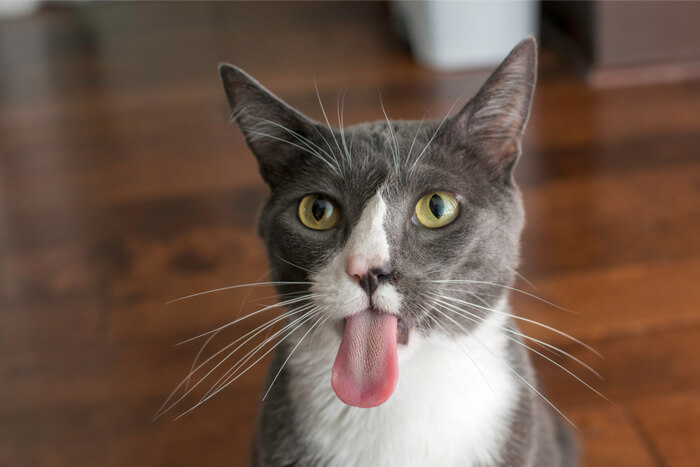 The feline tongue is a specialized organ unlike any other tongue in the animal kingdom. Read on to learn 10 fascinating facts about cat tongues.

#1 A Cat’s Tongue Is Covered In Spines 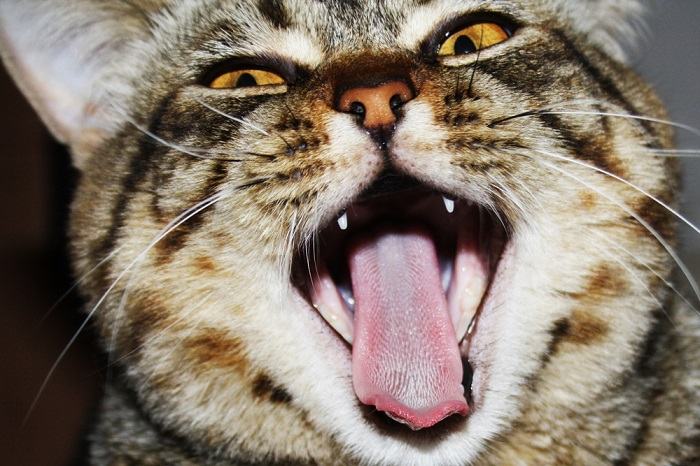 The sharp spines enable the distribution of saliva through the entire hair coat down to the cat’s skin, cleansing the coat and helping bring down the cat’s body temperature on warm days.

If you’ve ever wondered why your cat’s tongue feels rough like sandpaper, it’s because the surface is covered with hundreds of tiny backward-facing spines, called papillae.

A study by  researchers Alexis Noel and David Hu at the Georgia Institute of Technology published in the Proceedings of the National Academy of Sciences in Atlanta examined cats’ tongues via CT scans, high-speed videos and thermal imaging.

The study found that the small, sharp spines are shaped like scoops and are hollow at the tips. These hollow cavities absorb saliva, which is later distributed on the hair coat when the cat grooms itself.

The sharp spines enable the distribution of saliva through the entire hair coat down to the cat’s skin, cleansing the coat and helping bring down the cat’s body temperature on warm days. Cat papillae also untangle the coat like a natural hairbrush, and aid in the removal of loose shedding hairs from the coat.

#2 Wild Cats Have The Same Type Of Tongue 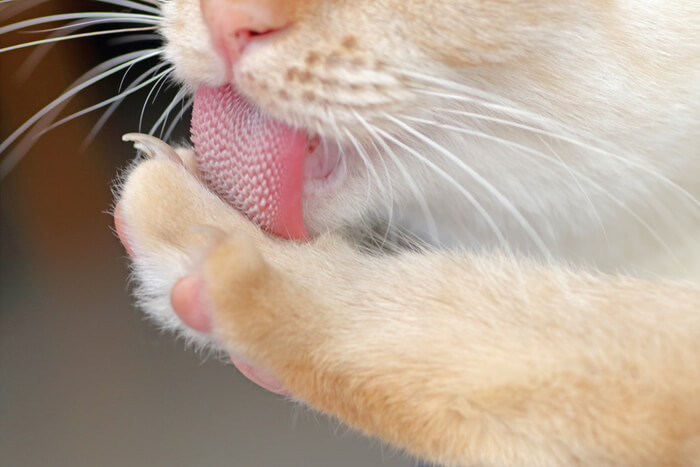 Cat tongue up close, a cat’s tongue is a natural hairbrush, smoothing the coat and removing loose hairs.

The sandpaper tongue is shared by all species of cats, both wild big cats and domesticated house cats, within the Felidae family of mammals in the order Carnivora. If you were to be licked by a lion, tiger, snow leopard, cougar or bobcat, it would feel much the same as the scratchy kisses from your domestic cat—albeit a bit more intense!

Wild cats groom themselves the same way domesticated cats do, using their tongues to distribute saliva on to the hair coat. The spiny papillae on the tongue assist with this self-grooming, but they serve another purpose—they help big cats hook and scrape meat from their prey meals.

#3 A Cat’s Tongue May Be Responsible For Hairballs 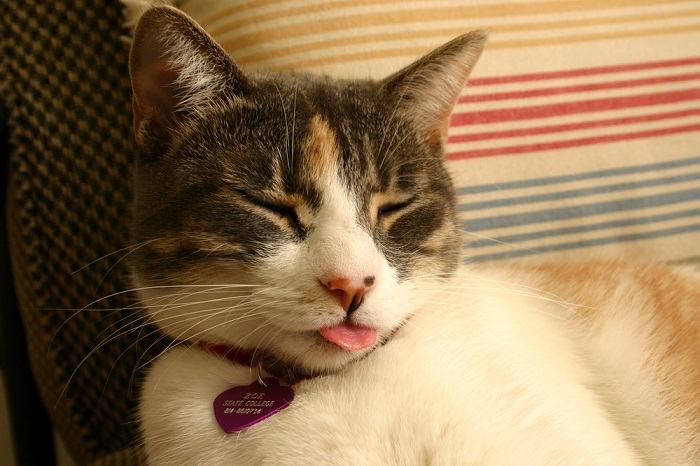 Cat owners should brush their cats frequently to remove as much loose hair as possible and help cut down on hairballs.

Cats spend much of their waking time grooming themselves. The stiff papillae of the tongue are great at untangling cat fur and removing loose hair from the coat.

Ideally, the cat does not swallow too much hair, but because the tongue’s spines face backward, anything in the mouth is directed toward the back of the mouth. Swallowing too much hair can cause hairballs if the cat doesn’t cough up a hairball and the hair isn’t able to pass through the digestive tract.

Cat owners should brush their cats frequently to remove as much loose hair as possible and help cut down on hairballs. This is especially important for cats with very long hair like Persian cats. You can also give hairball remedies or hairball food, which have ingredients designed to help move hair through the digestive tract and out the body. 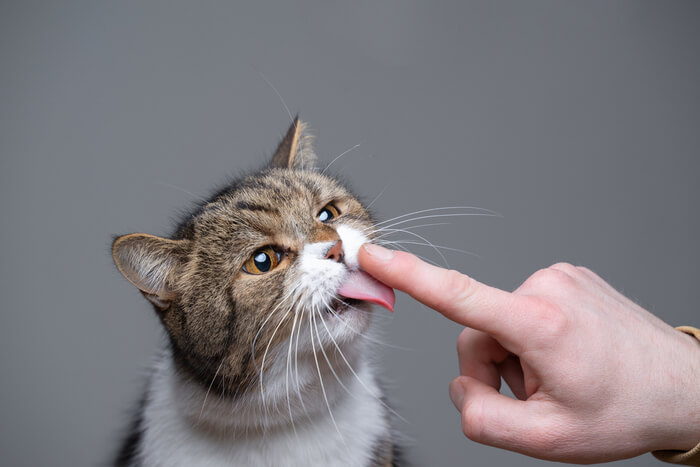 Tiny backward-facing spines made of keratin make a cat’s tongue feels like sandpaper. 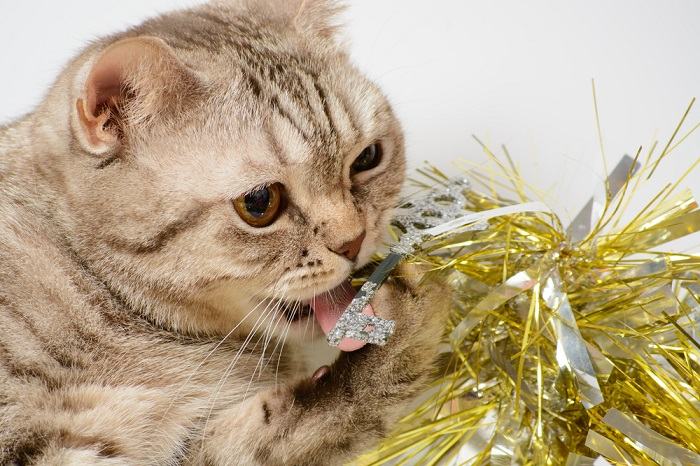 Always keep strings, yarn, ribbons and tinsel away from your cat, and if you see a piece sticking out of your cat’s mouth, never pull on it—you could inadvertently cause serious damage.

The backward-facing papillae can do more harm than contributing to hairballs. If a cat begins to swallow a long piece of string, yarn, ribbon, thread, tinsel or similar, the hooked barbs make it hard for the cat to spit it out.

One end of a string can become stuck to the tongue while the rest of the string continues down the digestive tract. This is extremely dangerous as the string can rub and eventually saw its way through delicate tissues inside your cat.

Always keep strings, yarn, ribbons and tinsel away from your cat, and if you see a piece sticking out of your cat’s mouth, never pull on it—you could inadvertently cause serious damage. Instead, rush your cat to a veterinarian for treatment.

#6 A Cat Can Move The Papillae On Its Tongue 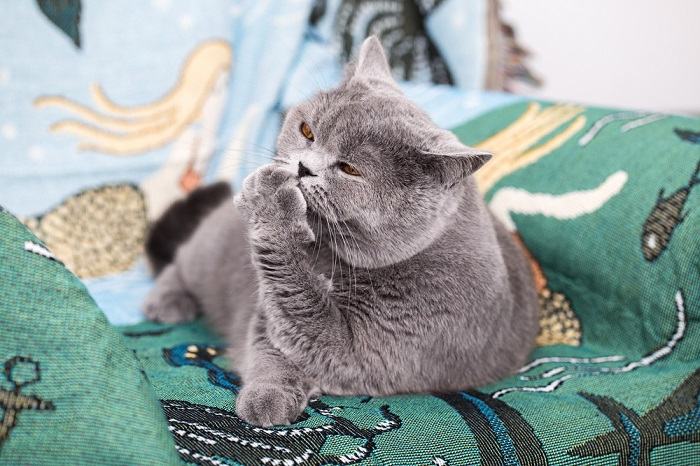 When a cat is not using its tongue for grooming, eating or drinking, the bristles on the tongue lie flat facing the back of the mouth. When the cat is ready to groom itself, it opens its mouth, extends the tongue and the papillae stand up off the tongue, ready to get to work. 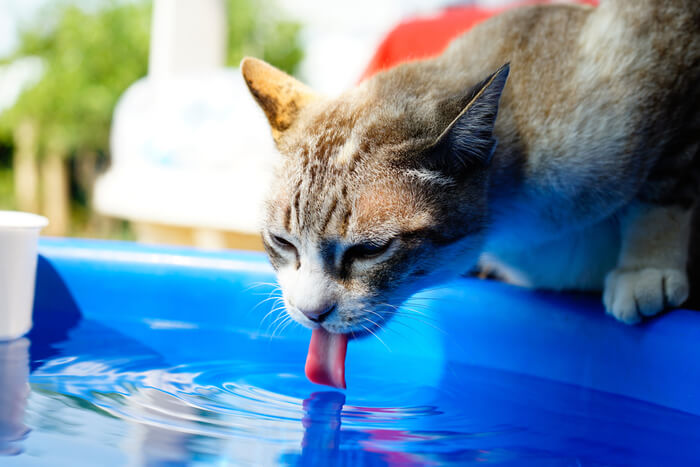 Cats use their tongues to drop water up toward their mouth in a column.

Humans sip water with their lips and dogs use their tongues to lap up water, like using a ladle. When a cat drinks water, though, it uses its tongue in a very unique way.

Rather than lapping up water like a dog, a cat uses its tongue like a backward scoop to quickly draw water straight up toward its mouth. The action of the tongue is so fast that water is pulled up in a stream or column.

The cat closes its mouth around the column of water to take a drink. The next time your cat takes a drink of water from her bowl, try to sneak a peek so you can witness this unusual phenomenon in action.

#8 A Cat’s Tongue Can Provide Clues About Its Health If you ever notice that your cat’s tongue or gums look anything but bright pink, contact your veterinarian immediately. 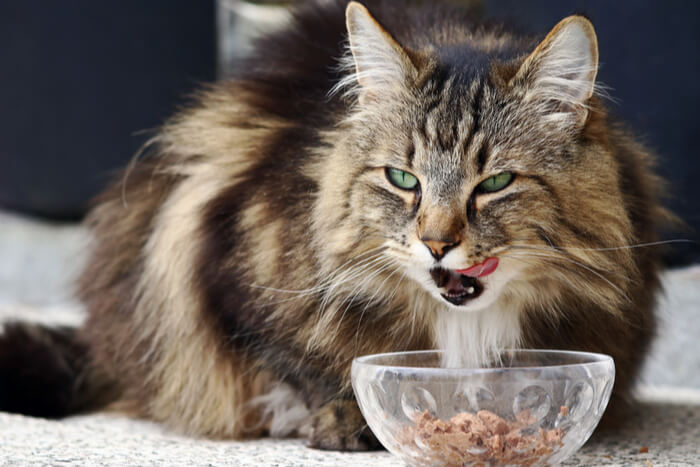 Newborn kittens can’t urinate or defecate on their own. In order to poop and pee, the kittens rely on help from their mother. Several times a day, the mother cat licks each kitten’s genital area with her rough tongue.

This action stimulates the kitten to spontaneously urinate and defecate. When a litter of young kittens is orphaned, it’s vital that the human caregiver stimulate them to pee and poop by wiping their genital areas with a warm, damp washcloth, which simulates the mother’s tongue.

#10 Cats Can’t Taste Sweet, But They Can Taste One Thing Humans Can’t

Humans can’t taste ATP, which is a compound found in meat. One thing dogs and humans can taste but cats cannot is sweet flavors. This is because cats do not have the taste receptor required to detect sweet (the TAS1R2 gene). Some researchers hypothesize that cats have no biological need to taste sweet foods since their diet is primarily meat based.

Is a cat's tongue dirty?

Cat mouths and tongues, like all animals, harbor bacteria. Some cats harbor bacteria that can cause serious disease, including the bacterium Bartonella henselae, which causes cat scratch fever, sometimes called cat scratch disease.

An unvaccinated cat infected with rabies can also transmit this virus via a bite. Although a lick from your cat is not likely to cause you any harm, a cat bite might. Cats have sharp, needle-like teeth that can push bacteria deep into flesh, causing infection.

If your cat bites you or someone else, and the bite has broken the skin, seek medical attention as quickly as you can. If a cat bites another cat or dog in the house, make an appointment with your veterinarian so the wound can be cleaned and examined.

Why is a cat's tongue so rough?

A cat’s tongue feels rough like sandpaper because the surface is covered with hundreds of tiny backward-facing spines, called papillae. These small, sharp spines are made of karatin and shaped like scoops. They act like a natural hairbrush, untangling a cat’s coat and removing loose, shedding hair.

What is special about a cat's tongue?

A cat’s barbed tongue is unlike any other in the animal kingdom. Cats use their tongues to groom themselves—the backward-facing spines serve as a natural hairbrush. A cat uses its tongue like a scoop to drink, drawing water up in a column and into its mouth. Wild cats also use their tongues to scrape meat from the bones of their prey meals.

Does a cat tongue hurt?

Cats have tiny, backward-facing spines on their tongues called papillae, which make their tongues feel rough like sandpaper. If your cat licks you, it might feel coarse or even uncomfortable, but it shouldn’t hurt unless you have extremely sensitive skin.

Are cat tongues cleaner than humans?

The idea that a cat’s tongue or mouth is cleaner than a human’s is mostly a myth. Cats harbor many different organisms in their mouths, some of which can be harmful to humans, especially via a cat bite.

A cat’s sharp, needle-like teeth can drive harmful bacteria deep into the skin where they can fester and turn into an infection. However, humans are unlikely to become ill from feline love nibbles or licks.

Can a cat's tongue cut you

No a cat's tongue can not cut you, a cat’s tongue feels rough like sandpaper, it’s because the surface is covered with hundreds of tiny backward-facing spines, called papillae.

What is on a cat's tongue

The surface of a cat's tongue is covered with hundreds of tiny backward-facing spines, called papillae

Why do cat tongues have spikes

The spiny papillae on the tongue assist with this self-grooming, but they serve another purpose—they help big cats hook and scrape meat from their prey meals.

A cat's tongue has tiny backward-facing spines made of keratin make a cat's tongue feels like sandpaper. It looks like a natural hairbrush, smoothing the coat and removing loose hairs