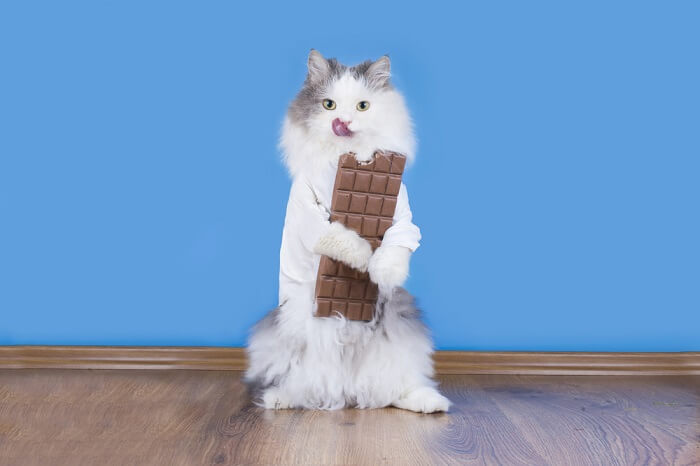 Chocolate is a tasty treat for humans, but it’s highly toxic to many animals, including cats and dogs. This article aims to explain the background to chocolate poisoning, helping cat owners to understand why it happens, what can be done if their cat is affected, and how to prevent it from happening in the first place.

Some cats eat chocolate as a treat, if given a chance, although they are less likely to do this than dogs. And sometimes owners like to spoil their feline friends by giving treats, and if they do not know better, they may offer chocolate.

About Chocolate Poisoning In Cats 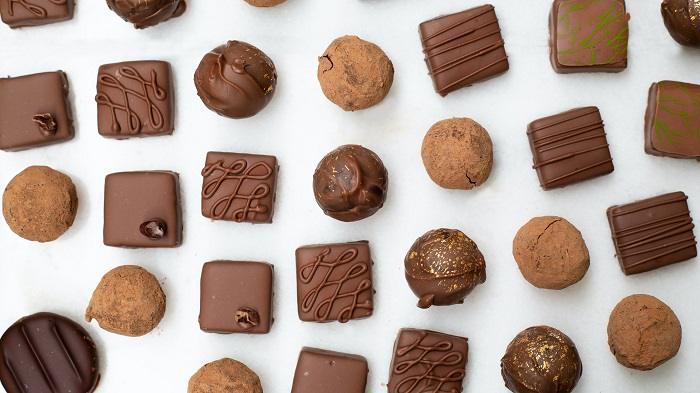 Chocolate contains so-called methylated xanthine alkaloids or methylxanthines, specifically theobromine and some caffeine. These chemicals give humans a pleasant and mildly euphoric feeling, but cats are unable to metabolise them effectively, so levels rapidly increase in the bloodstream after ingestion, leading to some serious toxic effects. 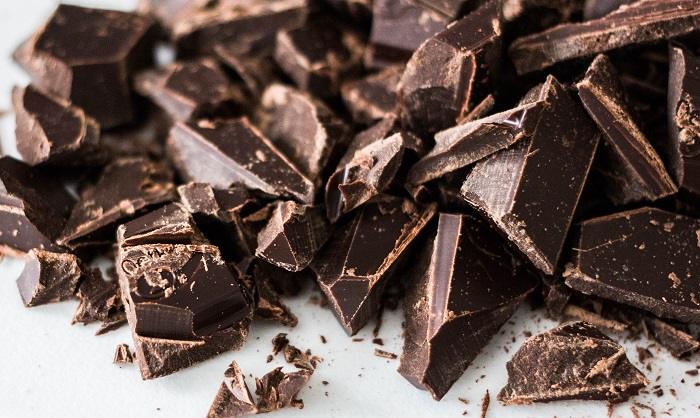 How Much Chocolate Is Poisonous? 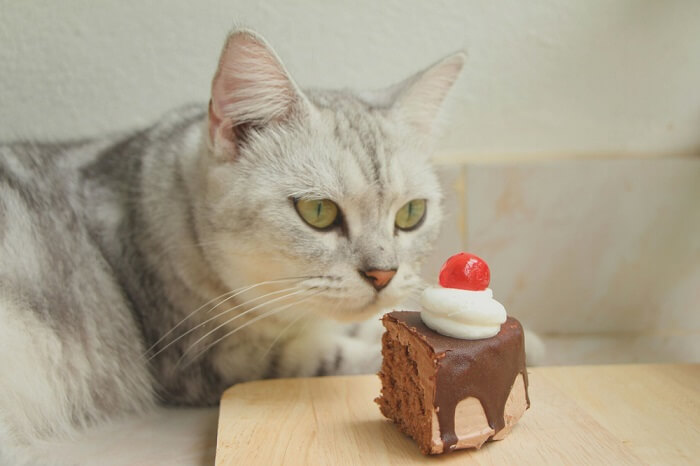 Toxic doses of theobromine are 20 mg per kg of a cat’s body weight (9mg/ pound), and a severely toxic dose is twice this dose (40mg/kg or 18mg/pound).

The botanical name for the tree that chocolate comes from is Theobroma Cacao, and Cacao is the name of the seed (also known as cocoa bean) which is used to make the various chocolate products, from Hershey to Cadburys and many more, from Easter eggs to chocolate bars to chocolate drinks.

Specifically, the toxic doses of theobromine are 20 mg per kilogram of a cat’s body weight (9mg/ pound), with very severe toxicity if twice this dose is given (40mg/kg ro 18mg/pound).

Most calculators of this type mention only dogs, because dogs are more commonly affected than cats, but cats have the same sensitivity to chocolate toxicity as dogs, so the same calculations apply.

One extra risk that cat owners should be aware of: when cocoa beans are roasted, the shell separates from the bean, and if these shells are gathered, they can be used to create cocoa shell mulch, which is then sold to be used in gardens. There is a small risk of toxicity if cats happen to ingest cocoa mulch.

Symptoms Of Chocolate Poisoning In Cats 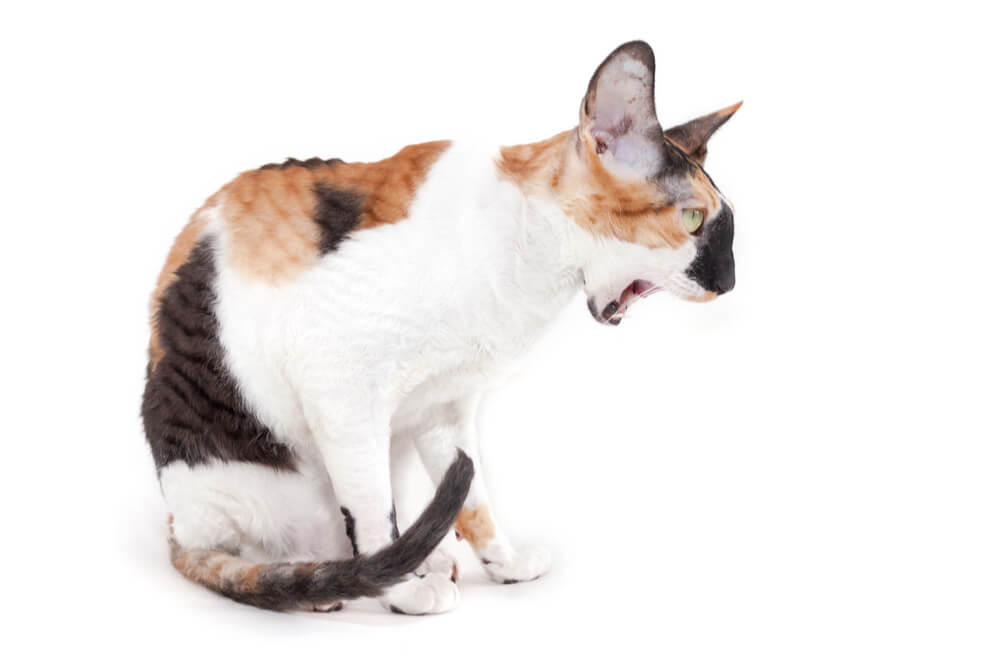 The signs of chocolate poisoning in cats are many, with vomiting, diarrhea and increased urination being the most common ones.

Diagnosis Of Chocolate Poisoning In Cats 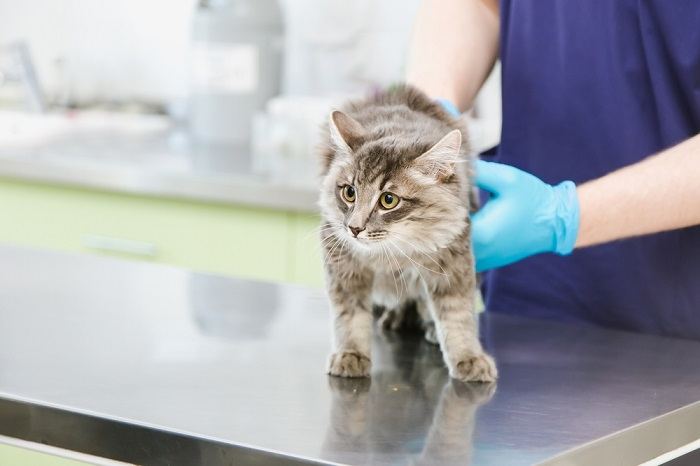 A vet will discuss every aspect of your cat’s background and overall care, as well as taking details of when, how much, and what type, of chocolate that has been consumed. The amount and type of chocolate that has been eaten is highly significant in order to determine the toxic risk, and a local animal poison control center or a pet poison helpline may be contacted as part of this initial discussion to do specific calculations of risk. 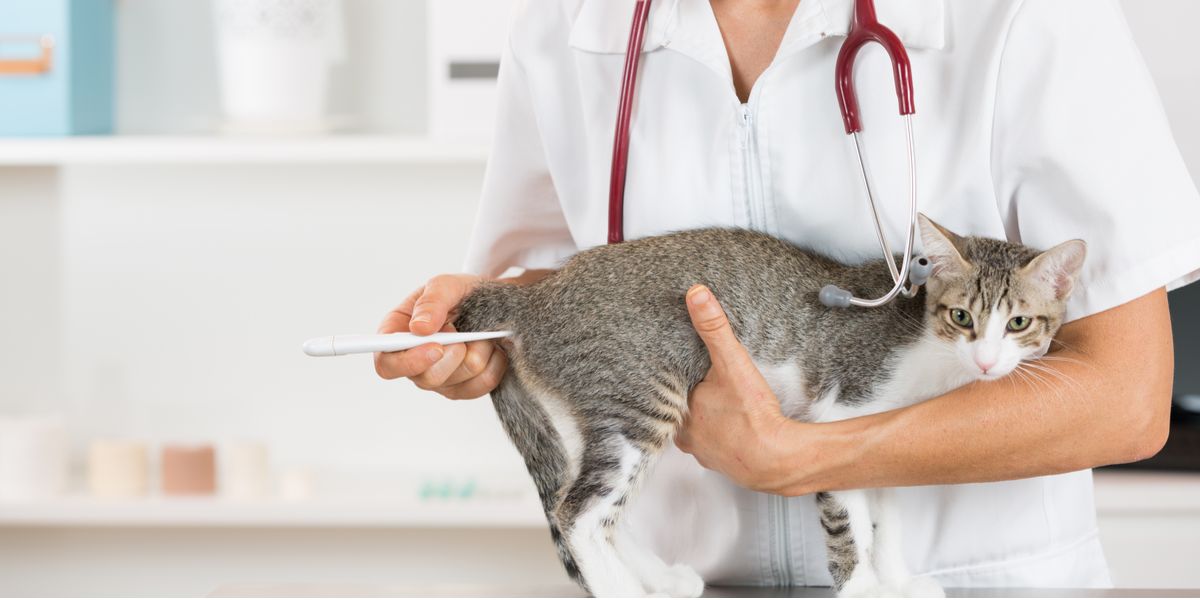 Your veterinarian will check your cat over carefully, checking for any signs suggestive of chocolate poisoning, including listening for abnormalities to the heart rate and rhythm. 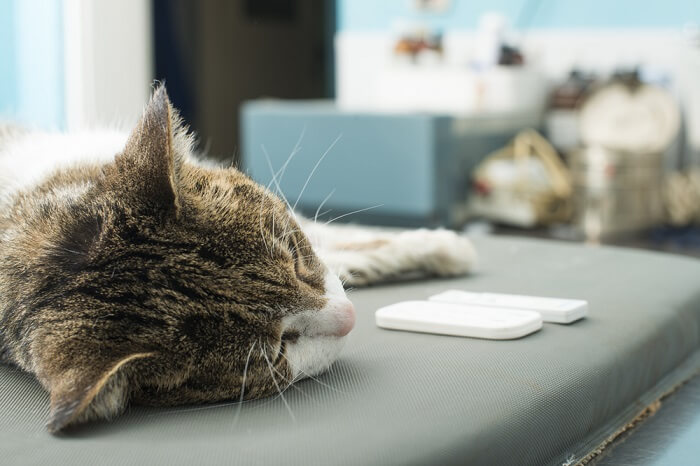 Your DVM veterinarian may carry out routine blood work, including the usual panel of diagnostic tests, such as hematology (blood count) and biochemistry profiles to check for any damage to internal organs by the toxins in the chocolate. 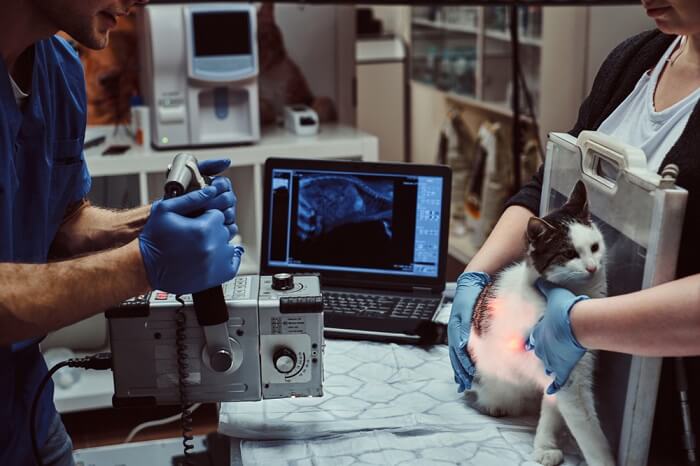 Urine tests, ECG, blood pressure measurement, radiographs (X-rays) and ultrasound may be carried out to check other aspects of your cat’s health.

Treatment Of Chocolate Poisoning In Cats 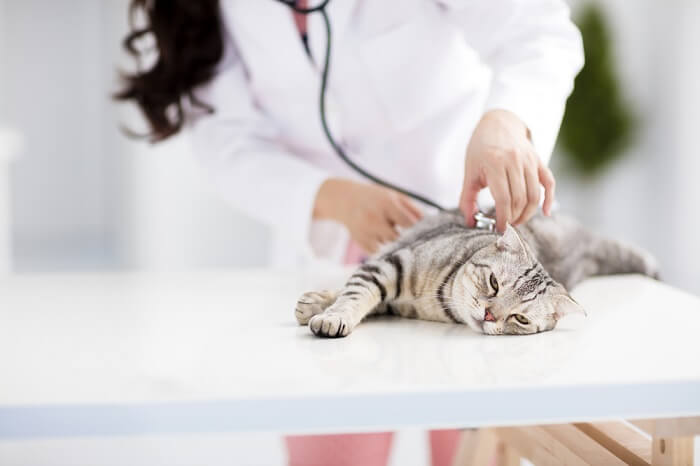 Vomiting or gastric lavage, activated charcoal or support treatments can all be effective ways of removing or blocking chocolate from the cat’s system.

Induction of emesis (vomiting) or gastric lavage can be an effective way of removing any chocolate from the cat’s stomach if this is carried out promptly enough (ideally within an hour of ingestion).

Activated charcoal may also be recommended in an attempt to limit the absorption of chocolate from the digestive tract.

Otherwise, support treatments are given to counteract the adverse effects of chocolate toxicity, and it’s very likely that your cat will need to be an in-patient at the animal hospital for this to be given.

Sedative type medication may be given to control agitation and hyperactivity, as well as trembling and twitching. If seizures develop, full general anaesthesia may be needed.

If cardiac arrhythmias are present, specific medication may be needed to control these.

General supportive treatment is also important, including intravenous fluids, digestive tract protectants, and other medication to control any signs that the cat may be showing.

​Prevention Of Chocolate Poisoning In Cat 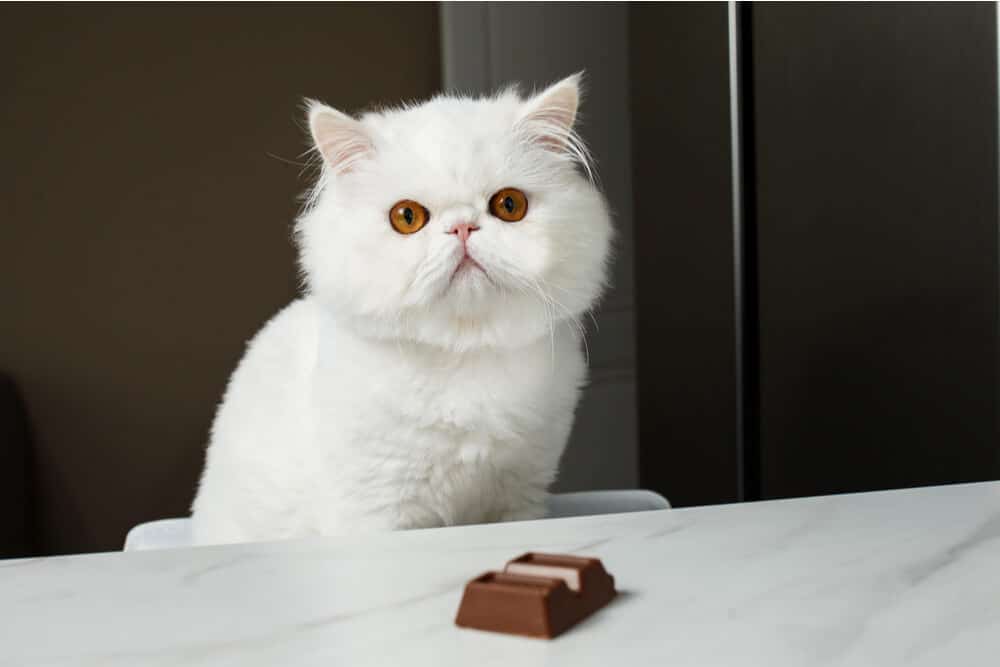 Some foods, like chocolate, are truly poisonous to cats.

Pet owners should store all chocolate safely, out of the reach of pets, and chocolate should never be given to cats. 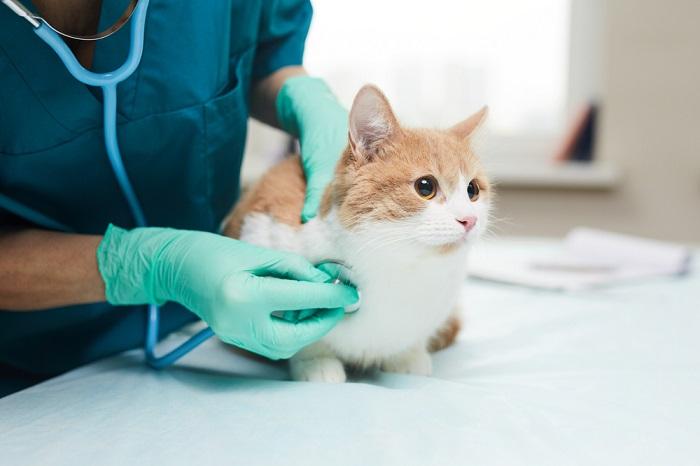 Chocolate poisoning is an unusual poisoning in cats, but it can happen. If a cat is known to ingest chocolate in dangerous quantities, prompt action by taking the cat to the emergency veterinarian is essential and can be life saving.

How much chocolate is toxic to cats?

An average cat weighing 5kg, would suffer poisoning if 100mg of theobromine was eaten, which is around 66g (2.3 ounces) of milk chocolate, 20g (0.7 ounces) of dark chocolate, or 7g (0.25 ounces) of bakingchocolate.

How long does chocolate poisoning last in cats?

The signs of poisoning can start within a few hours of ingestion, and it can take up to four days for chocolate to work its way through the cat’s system.

Will my cat die if it eats chocolate?

Death is possible if a cat has consumed a high enough dose of chocolate: use an online chocolate toxicity calculator to work out the risk, such as this one http://veterinaryclinic.com/chocolate/calc.html

What should I do if my cat eats chocolate?

You should use an online calculator to work out the risk of toxicity, and if your cat has consumed a potentially toxic amount of chocolate, you should contact your local emergency veterinarian immediately.