We’ve taken a close look at Nutro and graded it according to the Cats.com standard, evaluating the brand on species-appropriateness, product variety, price, ingredient quality, customer experience, and recall history.

We’ve rated Nutro on six key criteria for quality. Here’s how it rates in each of these six crucial areas.

Read on to learn more about Nutro and how we reached this conclusion.

The Nutro Company started in 1926, when an American named John Saleem purchased a British dog food company and named it Nutro Products.

The company was originally headquartered in Industry, California, where it sold pet food locally until the company was sold in 1976 and expanded its market.

Nutro is headquartered in Franklin, Tennessee, and its products are distributed around the world.

Nutro sources their own ingredients and makes pet food in their own plants.

In order to receive this certification, the company’s manufacturing facilities were inspected and audited in several areas, including ingredient selection, equipment and grounds cleanliness, and product labeling.

Nutro has been recalled multiple times since its inception in 1926. The following is a brief history of the company’s recalls over the years.

Nutro dog treats were recalled due to potential mold contamination. The recall was limited to apple chewy treats sold at PetSmart.

In May of 2009, several varieties of Nutro cat food were recalled due to incorrect levels of zinc and potassium. Lisa Wade McCormick of ConsumerAffairs.com said in the two years prior to the recall, over 800 cat and dog guardians reported that their pets had fallen ill after eating Nutro foods.

While it’s unclear whether or not the reports were related to zinc and potassium imbalances, the sick pets displayed the same symptoms described in the company’s 2009 recall announcement and often got better after switching to a new food.

After they learned that one of their US-based suppliers was giving them imbalanced vitamin premixes, Nutro said that they’d received no customer complaints. The recall, they said, was “issued out of an abundance of caution”.

Later that year, Mars announced a large recall of various Nutro dry dog and cat foods. The recall took place after small pieces of melted plastic were found in the production line. It was limited to products sold at PetSmart and Petco stores.

Nutro foods were involved in the nationwide melamine recalls of 2007. At the time, several Nutro varieties were manufactured by Menu Foods, who imported melamine-contaminated wheat gluten from China.

What Kinds Of Cat Food Does Nutro Offer?

Nutro offers a large selection of dry and wet cat foods. These foods are broken down into two lines—Nutro MAX and Nutro Original. 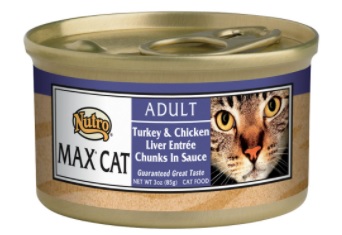 Turkey appears to be the primary protein source in this canned food.

This popular formula is made with chunks of turkey, chicken liver, and beef liver set in a thick sauce. The sauce is thickened with potato starch, guar gum, and xanthan gum, all of which contribute to the food’s approximate 16.6% carbohydrate content on a dry matter basis.

In addition to these plant-based thickeners, the food contains wheat gluten, which is a less-than-ideal source of protein. One ingredient that you don’t see in most cat foods is pork plasma. Blood plasma is extremely nutrient-rich and a natural part of the feline diet.

Overall, the food’s calorie content is 72 calories per can. It’s relatively high in protein with moderate fat and moderate carbohydrates.

Compared to “chicken”, chicken meal is a concentrated source of animal protein. It’s also more heavily processed, since it’s dehydrated and pulverized before it goes into your cat’s food.

Overall, this is a plant-heavy dry cat food containing generous amounts of high-carbohydrate ingredients. It has moderate protein, moderate fat, and a high percentage of carbohydrate matter. It contains 457 calories per cup. 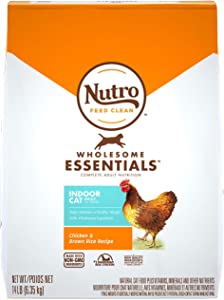 Chicken and chicken meal appear to be the primary protein sources in this recipe.

This food’s ingredient list starts with both chicken and chicken meal as sources of species-appropriate animal protein. Brewers rice, pea protein, whole brown rice, alfalfa meal, and potato protein are also high on the ingredient list. These ingredients contribute to the food’s high carbohydrate content and increase the concentration of plant protein.

Overall, this is a plant-heavy food with moderate protein content, moderate fat, and high carbohydrate content. Like most foods marketed for indoor cats, this food is high in fiber and relatively low in calories with 372 calories per cup.

What Do Customers Think Of Nutro Cat Food?

Many people love Nutro. Over more than 40 years in the industry, Nutro has developed a loyal customer base. Their product listings consistently receive four-and-five-star reviews from both new and old customers.

However, not everyone is happy about Nutro. Reviewers on Consumer Affairs frequently state that the company dismissed or ignored their questions. Some say the food made their pets sick, though this is more common among Nutro dog foods than the brand’s food for cats.

To get an idea of what customers are saying about Nutro, here are a few reviews selected from several popular recipes listed on Amazon and Chewy.

“I already knew this was going to be great cat chow b/c rescue cat’s former “mom” provided three bags for future use 🙂 An added bonus is that the product is not too crunchy which is good for this cat with two bad teeth that can’t be removed due to heart murmur (anesthesia might kill him)..” – chippie, reviewing Nutro Wholesome Essentials Indoor Farm-Raised Chicken & Brown Rice Dry Cat Food

“I highly recommend this food for male cats in particular as they are prone to stones and getting them treated medically is extremely expensive if they survive at all. I have been feeding Nutro to my many male cats for decades and never had one issue with stones. Not the case with friends cats who fed them other foods. Why mess with perfection I say.” – Jazz, reviewing Nutro Max Adult Roasted Chicken Dry Cat Food

“Cake, the cat, used to love this brand! It had a ton of gravy and meat chunks. Now, the gravy is almost non existent *(the food is still moist but there is not a lot of gravy in the can). Chewy said the formula didnt change so maybe the manufacturer is just doing less gravy? Who knows.” –Tinacolada, reviewing Nutro Max Adult Chicken Supreme Entree

“Cats seem to love. Only complaint is they seem to have twice as much waste in litter since switching to this brand. Wondering if they are retaining enough nutrients before its evacuated???? Not as much waste when using Iams…..” – Tllr, reviewing Nutro Wholesome Essentials Chicken & Brown Rice

How Much Does Nutro Cat Food Cost?

Overall, Is Nutro A Good Choice?

Nutro is a well-regarded company, but it’s not the best in the industry. On the positive side, some Nutro canned foods stand out as exceptionally species-appropriate, meat-rich foods that meet the nutritional needs of obligate carnivores. Nutro’s biggest flaws are customer service and safety. The company has a shaky customer support reputation and a history of recalls that bring its integrity into question.

Where Is Nutro Cat Food Sold?

You can buy it online on Amazon, Chewy, Pet360, Petco, Petflow, PetSmart, PetSupermarket, and Wag.com.

Click here to shop for Nutro cat food on Chewy.