Primal is a leader in meat-based raw food, but is it a safe, healthy choice for your cat? Find out in our Primal cat food review.

We’ve analyzed Primal and graded it according to the Cats.com standard, evaluating the brand on species-appropriateness, ingredient quality, product variety, price, customer experience, and recall history. Here’s how it rates in each of these six key areas.

Click Here To Shop For Primal Cat Food On Chewy

Click Here To Shop For Primal Cat Food On Amazon

In 2000, Matt Koss’ dog, Luna, was diagnosed with early stage renal failure. After experimenting with various treatment routes, Matt visited a holistic veterinarian, who recommended a diet of raw meat and bones. Inspired by Luna’s renewed vitality, Matt started developing a company that would bring fresh, raw food to other pets.

Primal Pet Food was founded in 2001. All Primal foods attempt to simulate the natural feline and canine diet. They’re made from fresh meat, bones, and organs, along with other ingredients intended to mimic a whole prey diet.

Instead of feed-grade ingredients, Primal uses only USDA edible-grade meat, including wild-caught fish and cage-or-crate-free poultry and pork.

Primal cat food is made in the United States in facilities certified by the USDA and State Department of Agriculture.

Has Primal Cat Food Been Recalled?

Primal cat food has been recalled at least three times.

In December of 2017, the company recalled several varieties of freeze-dried cat and dog food, explaining that the bone grind size had “deviated from the ideal”.

Two years prior, the company recalled a limited quantity of raw frozen cat food due to potentially low thiamine levels.

What Kinds Of Cat Food Does Primal Offer?

The Primal cat food lineup includes raw frozen nuggets, raw frozen nibbles, and freeze-dried nuggets. All of their recipes are meat-centric, featuring minimally-processed meat, bones, and organs alongside a smattering of fruits, vegetables, and supplements.

These products include a variety of mixed-protein and single-protein recipes. Primal’s protein sources include pork, rabbit, turkey, quail, venison, and other allergy-appropriate choices.

In addition to these complete formulas, Primal offers a variety of supplements and treats, including bone broth, raw goat milk, and slow-roasted or freeze-dried treats. 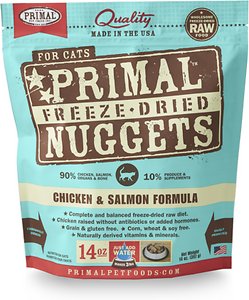 Chicken appears to be the primary protein source in this freeze-dried cat food.

These freeze-dried nuggets are made from a mix of fresh salmon and wild-caught salmon. Chicken ingredients account for the bulk of the recipe. Chicken meat, chicken necks, and gizzards are the first three ingredients. Salmon is the fourth ingredient and represents roughly 5% of the food. After salmon, the food contains chicken livers as the food’s final organ meat. In total, the food is about 9% organs. That’s close to the amount you might find in your cat’s whole prey diet.

In addition to meat, bone, and organs, the food contains a mix of kale, squash, carrots, and other produce. These fruits and vegetables represent about 8% of the total recipe. The food is also supplemented with montmorillonite clay, which Primal explains is used as a source of essential trace minerals. Using this clay allows Primal to avoid using a synthetic vitamin pack.

By using a combination of fresh meat, bones, organs, and produce, the food stands on its own nutritional feet without the need for synthetic vitamin supplementation. Primal says their food provides “complete and balanced nutrition for all life stages and is comparable in nutritional adequacy to a product which has been substantiated using AAFCO feeding tests.”

Overall, this food is high in protein with moderate fat and extremely low carbohydrate content.

This food appears to have a macronutrient distribution similar to that found in a cat’s whole prey diet. It also seems to deliver prey-inspired ratios of muscle meat, organs, and bones. The food is approximately 10% bone, which is close to the bone content of the average rabbit or mouse. 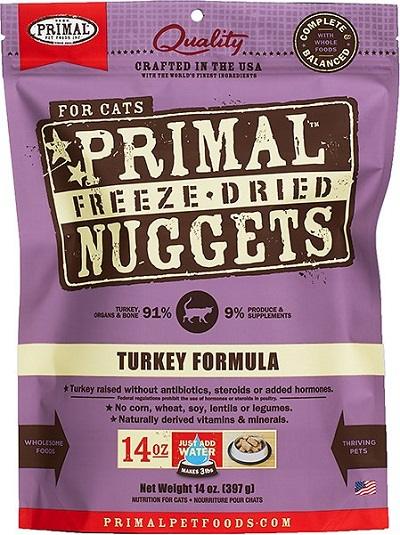 Turkey appears to be the primary protein source in this cat food.

This recipe features a combination of turkey, turkey necks, turkey hearts or gizzards, and turkey liver.

In addition to these turkey ingredients, the food contains a variety of fruits, veggies, and supplemental ingredients. While not contributing significantly to the food’s carbohydrate content, these ingredients act as sources of vitamins and minerals that would otherwise have come from synthetic supplements.

Supplemental ingredients include apple cider vinegar, which helps to increase the food’s acidity and may help to prevent urinary tract disease, and organic quinoa sprout powder as a source of B vitamins, and kelp as a concentrated source of vitamins and minerals.

The food contains a blend of sardine oil, cod liver oil, and coconut oil as sources of fatty acids.

Because it features turkey as its only significant protein source, this food is appropriate for cats with foods sensitivities and allergies. Despite the long list of fruits, vegetables, and plant-based supplements, the food appears to have a species-appropriate macronutrient distribution with a healthy ratio of muscle meat, organs, and bone. The food is 93% turkey in total and about 8% organ meat. Bones account for about 10% of the food.

The food has 148 calories per ounce. 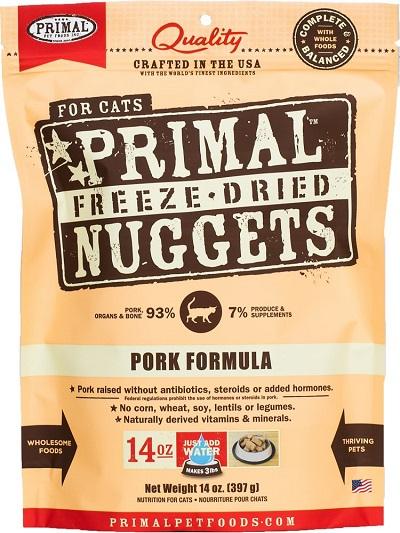 Pork appears to be the primary protein source in this freeze-dried cat food.

The freeze-dried nuggets are primarily made from antibiotic-free, hormone, and steroid-free pork hearts and organs.

The remaining 7% is constituted of produce and supplements, including collard greens, squash, green beans, cranberries, sunflower seeds, and more. Like all Primal recipes, the food relies on food ingredients instead of synthetic additives, but contains additional taurine.

Overall, this food is rich in protein with moderate fat and moderate carbohydrate content.

Pork ingredients represent 93% of the recipe. It’s about 8% organs and 6% bones, percentages that roughly reflect the composition of your cat’s natural prey.

The food has 147 calories per ounce.

What Do Customers Think Of Primal Cat Food?

Primal is a generally well-received brand. Customers like that Primal cat food is made primarily from raw meat and aligns with a whole prey-inspired diet. Unhappy customers complain that the food is inconsistent, saying that some batches smell strange or have an odd texture.

“My cat did not eat in one sitting using dry kibble. I switched him to this stuff and he devours it in one sitting. He wasn’t eating enough and now I have to scale back on his intake!! We’ve tried the Turkey Formula, Chicken & Salmon Formula, and now we’re on the Pork Formula. The Turkey and Chick/Salmon nuggets were very easy to break apart and add water. He enjoyed the Turkey but he LOVED the Chicken & Salmon. The Pork formula was so dry it took extra effort to break apart and re-hydrate. My cat was not happy with the 40 extra minutes of waiting. Neither was I!! So this is our new go-to bag. It lasted a week. Most of these do.” – KristynRene, reviewing Primal Turkey Freeze-Dried Nuggets

“Needed a low carb option for my cat that was also missing many of the common fillers and proteins due to health reasons and food allergies. Since we have been using the Primal Freeze Dried Nuggets, he has trimmed down and grown a soft, shiny coat. He loves the 3 formulas we’ve tried so far (venison, rabbit, pork) and cleans his bowl every time. Rabbit is my favorite of the three because it is easiest to rehydrate. Personally, I don’t feel like the recommended 1 tablespoon of water per nugget is enough, so I use 3 tablespoons of water per nugget (mostly because of his urinary trouble) but besides that it’s been great. Thank you Primal!” – Richie, reviewing Primal Pork Freeze-Dried Nuggets

“I agree with the other reviewers regarding the odor of rancid oil that this food has. I have had this on occasion since I started feeding the turkey nuggets a few years ago. I have not noticed it with the chicken and salmon variety, but the turkey has always been a problem. What was an occasional instance of the foul odor has progressively become more regular to the point that now the rancid smell of the food has become the norm. Chewy has been great about handling the problem and making it right, but I am done with this and will be returning to Stella & Chewy where I have never encountered this issue. It’s a huge drag since my cats love the turkey variety when it is as it should be.” – 4SafeFood, reviewing Primal Turkey Formula Freeze-Dried Nuggets

“According to my research on the best food for cats was a prey diet, that being how cats eat in the wild. The majority of the raw freeze-dried foods contained raw meats but fell short in my opinion when they started adding fruits and vegetables which cats are incapable of processing. When the raw animal meat is ground whole, bones and all, plus the organ meats, such as heart and liver, there is not even the need to add any vitamins or minerals. Everything the cat needs in found within the donor body just as found in the wild prey. The only food on this website that I found that does this is Vital Essentials. There may be others but I give this one 5 stars.” – Mamacat, reviewing Primal Chicken & Salmon Freeze-Dried Nuggets

How Much Does Primal Cat Food Cost?

Overall, Is Primal A Good Choice?

Though it’s one of the better brands on the market, Primal isn’t without its drawbacks.

Like many raw foods, Primal products tend to be relatively high in phosphorus, with typical phosphorus content around 1.0% or roughly 2 grams per 1,000 calories. That’s close to the recommended amount for growing kittens and certainly too high for a cat with kidney disease.

While most customers seem to love Primal cat food, some say that the food tends to be inconsistent. The company has issued several recalls over the years. Coupled with those customer complaints, this brings the company’s quality control into question.

Other than these concerns, Primal appears to be one of the best cat food brands you can buy.

Where To Buy Primal Cat Food?

Primal is exclusively sold by pet specialty retailers. Click here to find a Primal retailer near you. If you’d prefer to shop online, you’ll find Primal on Chewy and Amazon.

Click here to shop for Primal cat food on Chewy