It’s hard to imagine your pampered house cat doing anything other than snoozing in your lap and demanding food to be delivered directly to a porcelain plate. But despite that cushy lifestyle, domestic cats aren’t all that different from big cats in the wild.

Lions, snow leopards, jaguars, and cheetahs are the definition of wild and self-sufficient, but you’d be surprised by how many traits they share with your ten-pound tabby. Here’s a list of similarities that domesticated cats share with their big cat cousins. 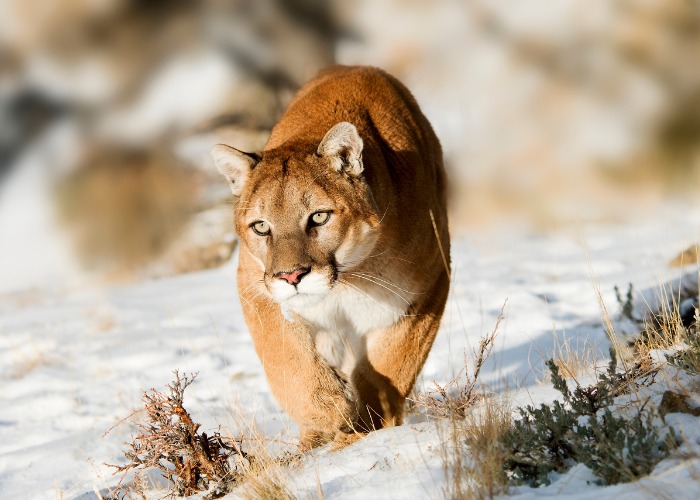 Both big cats and domesticated cats have short digestive tracts that allow them to digest protein and fat in a relatively short amount of time.

The food you plop into your pet cat’s bowl might not resemble fresh meat, but even commercial cat food (the good stuff, at least) is primarily made from meat. This is essential for a domestic cat’s health, because, like wild cats, our house cats are strict carnivores. This means they need to eat a meat-only diet in order to receive all their necessary nutrients.

Both big cats and domesticated cats have short digestive tracts that allow them to digest protein and fat in a relatively short amount of time.

That same digestive tract struggles to process plant matter. You might catch your cat nibbling on a fresh catnip plant, but they won’t get any important nutrition, no matter how much they eat.

In order to stay healthy, house cats depend on their owners to provide a species-appropriate, high-protein diet. Domestication hasn’t changed their nutritional needs. 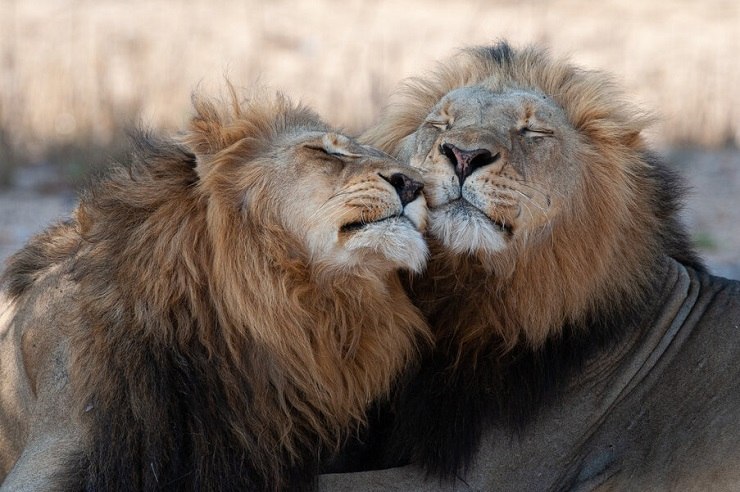 Like your house cat, big cats, including tigers, rub against objects in order to leave behind their scents.

How many times has your cat greeted you by rubbing against your legs? How many times have you seen your cat rub against objects including fence posts and furniture? The answer is probably too many to count. This classic cat behavior is cute, but it also has an important purpose. By rubbing against things, cats deposit scent markers to mark their property and territories.

A jungle cat will never affectionately and possessively rub against a human, but big cats look like oversized house cats when they rub against trees, rocks, and other members of their family groups. Like your house cat, big cats, including tigers, rub against objects in order to leave behind their scents.

When an unfamiliar animal wanders into that territory, it’ll only take one whiff for them to understand another cat has already staked a claim. Large cats even rub against each other, and most scientists believe it’s their way of showing affection and marking others as part of their family.

#3 They Have A Powerful Sense Of Smell. 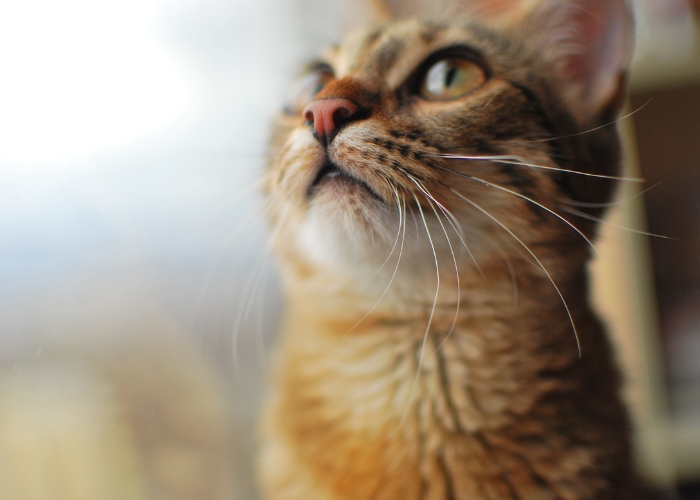 It’s believed that most feline family members have a sense of smell that is up to 14 times stronger than that of humans.

Rubbing against objects and depositing scent markers only works because cats–both big and domestic–have a powerful sense of smell.

It’s believed that most feline family members have a sense of smell that is up to 14 times stronger than that of humans. They have millions more odor sensors in their olfactory systems, and this allows them to pick up on the subtle scents both left behind on objects and floating in the air.

Big cats primarily use their noses for hunting. They can track down prey from great distances as long as they follow the scent trail. Both wild and domesticated cats also use scents for identification and communication. They can tell when a member of the opposite sex is interested in mating and when a rival animal aggressively marks a territory.

#4 They Have The Same Sleep Cycle. 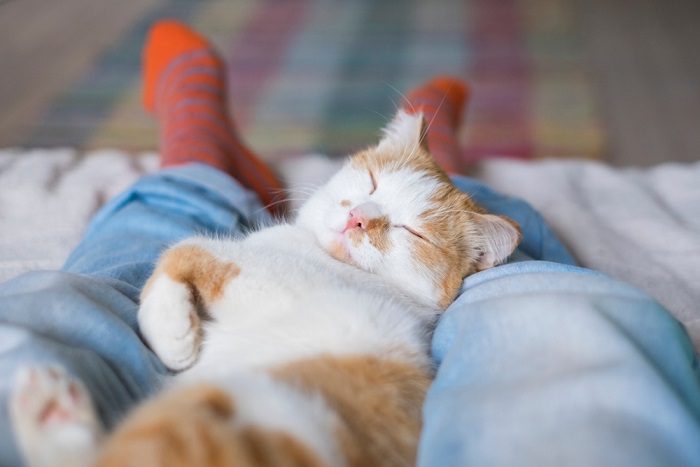 Cats including lions and cougars can spend up to 15 hours a day asleep, but they also take advantage of the dim lighting at dawn and dusk.

It’s normal for domestic cats to wake early in the morning to do sprints down the hallway. They also get bursts of energy in the evenings after a relaxing day of naps and more naps. This is because, as crepuscular creatures, cats sleep during the day and are most active at dawn and dusk.

Out in the wild, big cats are also awake at these times. Cats including lions and cougars can spend up to 15 hours a day asleep, but they also take advantage of the dim lighting at dawn and dusk. Like house cats, big cats have excellent night vision.

Their eyes have special features that allow them to see clearly when other animals are essentially blinded by darkness. The only difference is that while big cats use this super-powered eyesight to bring down prey, your house cat uses their night vision to knock things off your bedside table while you’re asleep.

#5 They Have Retractable Claws And Sensitive Paw Pads. 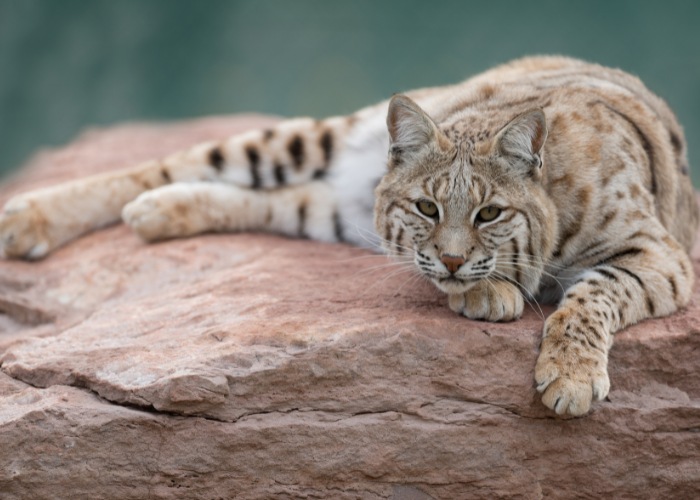 Both big and domestic cats have flexible paws with retractable claws.

You definitely don’t want to get too close to a big cat’s claws, but you can get a good idea of what they look like by simply studying your house cat’s feet. Both big and domestic cats have flexible paws with retractable claws.

This allows them to walk across different surfaces without getting their toes stuck or wearing down those sharp points. The cheetah is the only feline species that breaks this rule. They need their semi-retractable claws to propel them forward and control their steering at high speeds.

Also Read: How Fast Can A Cat Run?

All felines use their paws and claws to bring down prey–even if that prey is nothing more than a catnip mouse. They also use their paws to relay important sensory information. Their paw pads are covered in nerve endings that make them sensitive to temperature, pressure, and texture. They’re so sensitive, both big and domestic cats can use their paws to detect sound vibrations.

#6 They Have Natural Survival Instincts. 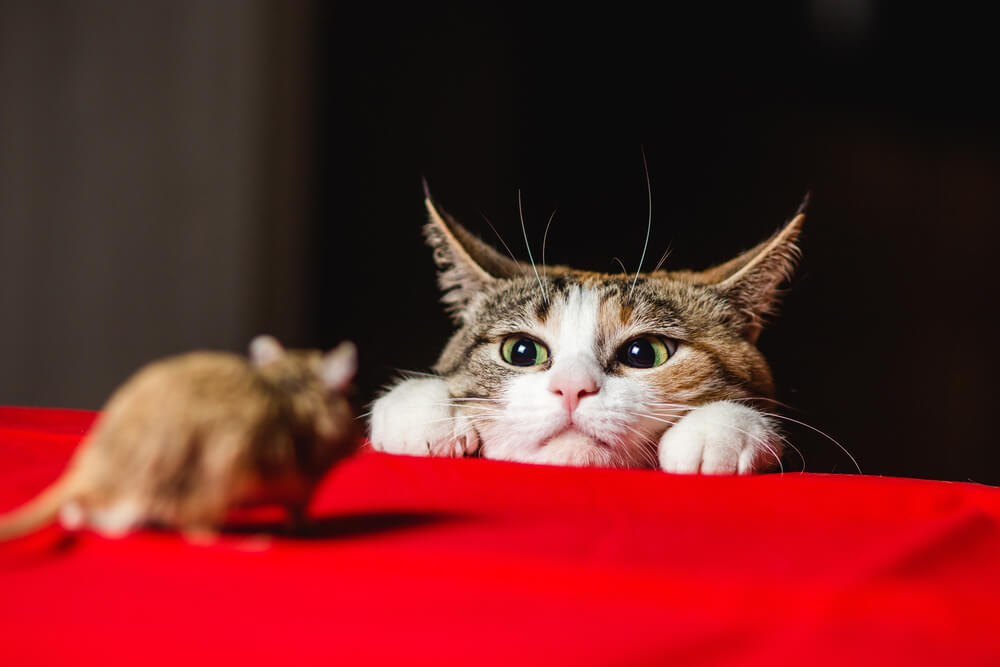 Your pampered house cat hopefully doesn’t have to worry about their own survival. But that doesn’t mean that they don’t know how or wouldn’t hunt if they had to.

Your pampered house cat hopefully doesn’t have to worry about their own survival. They get food hand-delivered every day, sleep on a comfy bed, and benefit from a heated home.

Underneath all that domesticity, however, every house cat has ingrained knowledge about how to survive. You can see hints of these natural instincts in your cat’s daily behavior.

For example, cats startle easily so they’re always on alert for danger. They also know how important it is to seek warmth, reject bitter-tasting foods, and stalk prey.

All of these habits relate to behaviors big cats rely on every day to survive. The same life lessons that tell a lion to stalk prey by camouflaging themselves in long grass exist within your house cat as they playfully leap from behind a chair to pounce on a feather wand. 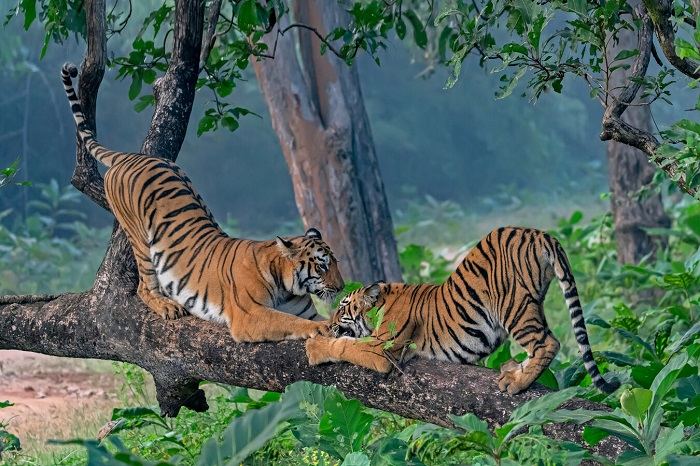 Big cats are fierce by necessity, but that doesn’t mean they don’t know how to have a good time. Just like your playful pets, wild cats like to destress and connect with others through play. Cubs are more likely to play than adults, but even older wild cats have been known to engage in playful wrestling matches.

Like house cats, wild cats use play to learn basic social and hunting skills. They tussle with their littermates in faux fights and stalk each other from behind mom’s flank. They learn how to interact with others in their family groups and seem to thoroughly enjoy being silly and carefree.

Even while your feline friend snoozes on the couch, they possess a certain amount of wildness. House cats have been domesticated for over 10,000 years, but their similarities with cats in the wild remain strong. 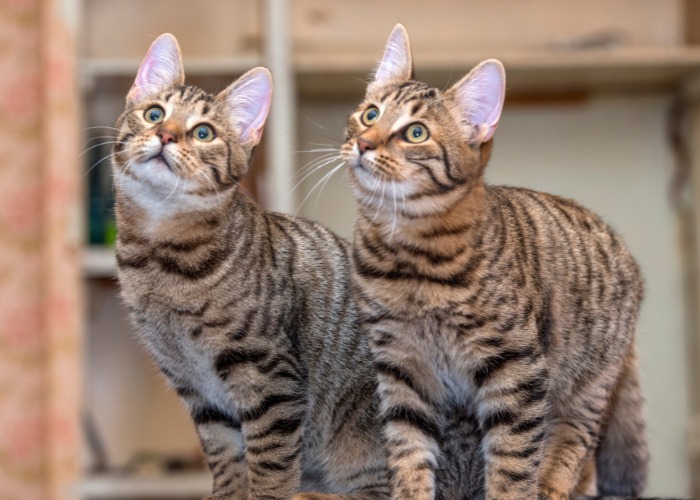 House cats have been domesticated for over 10,000 years, but their similarities with cats in the wild remain strong. 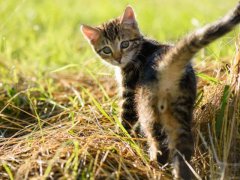 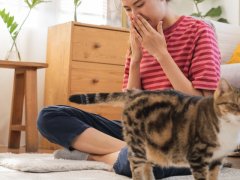 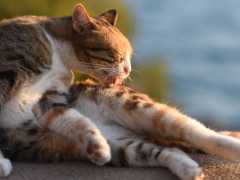