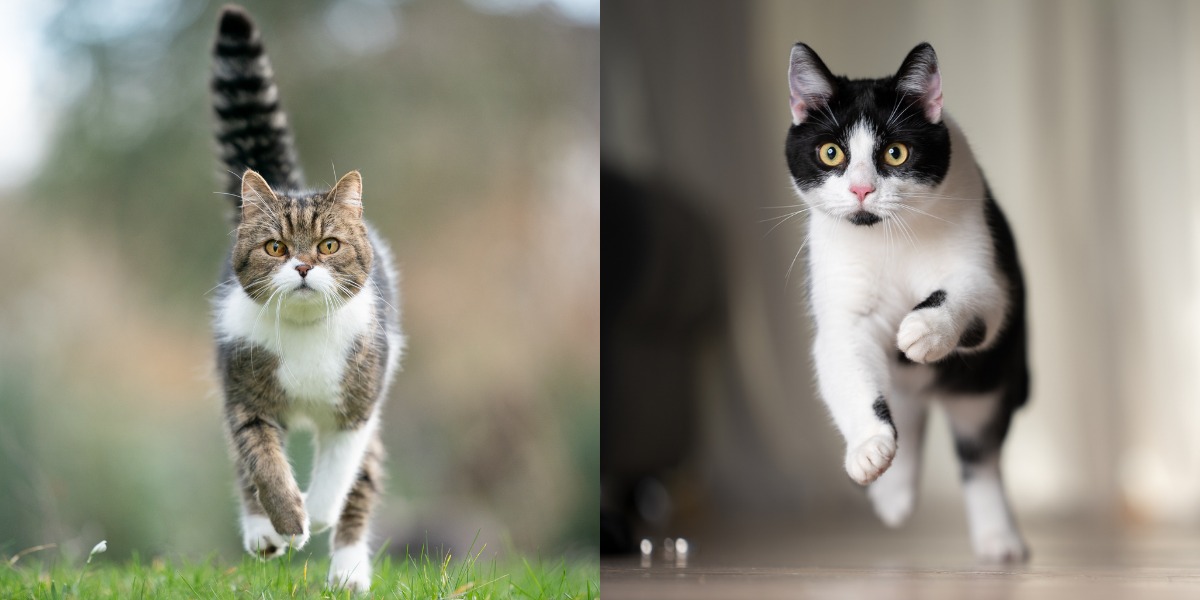 Cats can seem like super speedsters when they’re zooming around the house at 3am and skidding to a stop right before hitting your shins. But then you catch your snuggly snoozer lazily swatting at a sunbeam, and you can’t imagine them moving very fast at all.

Cats are masters of contradiction. They’re sweet and salty, incredibly athletic and also impressively lazy. Even with their contrasting moods, we can’t forget that our domesticated house cats are equipped with incredible physical skills.

Cats’ natural strength, agility, and flexibility translate into abilities that shouldn’t seem possible for a 10-pound animal that prefers its store-bought food to be personally delivered on a porcelain plate. Nevertheless, cats are considerably faster than humans and can even keep up with dogs five times their size. 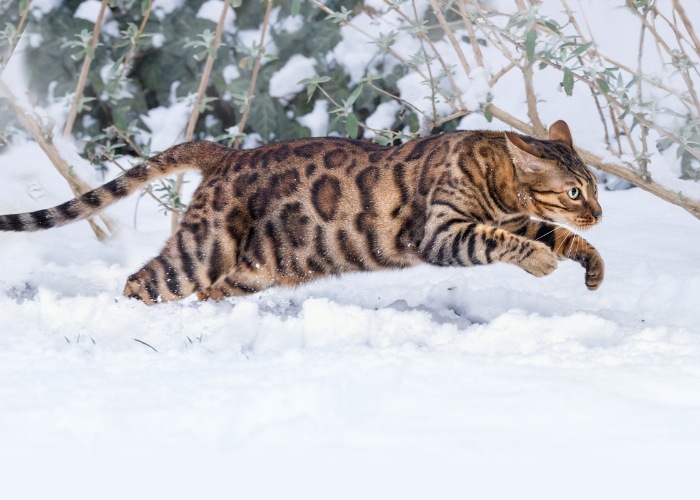 Though all cats vary, the average house cat can hit a top speed of around 30 miles per hour.

How Fast Can a Cat Run? 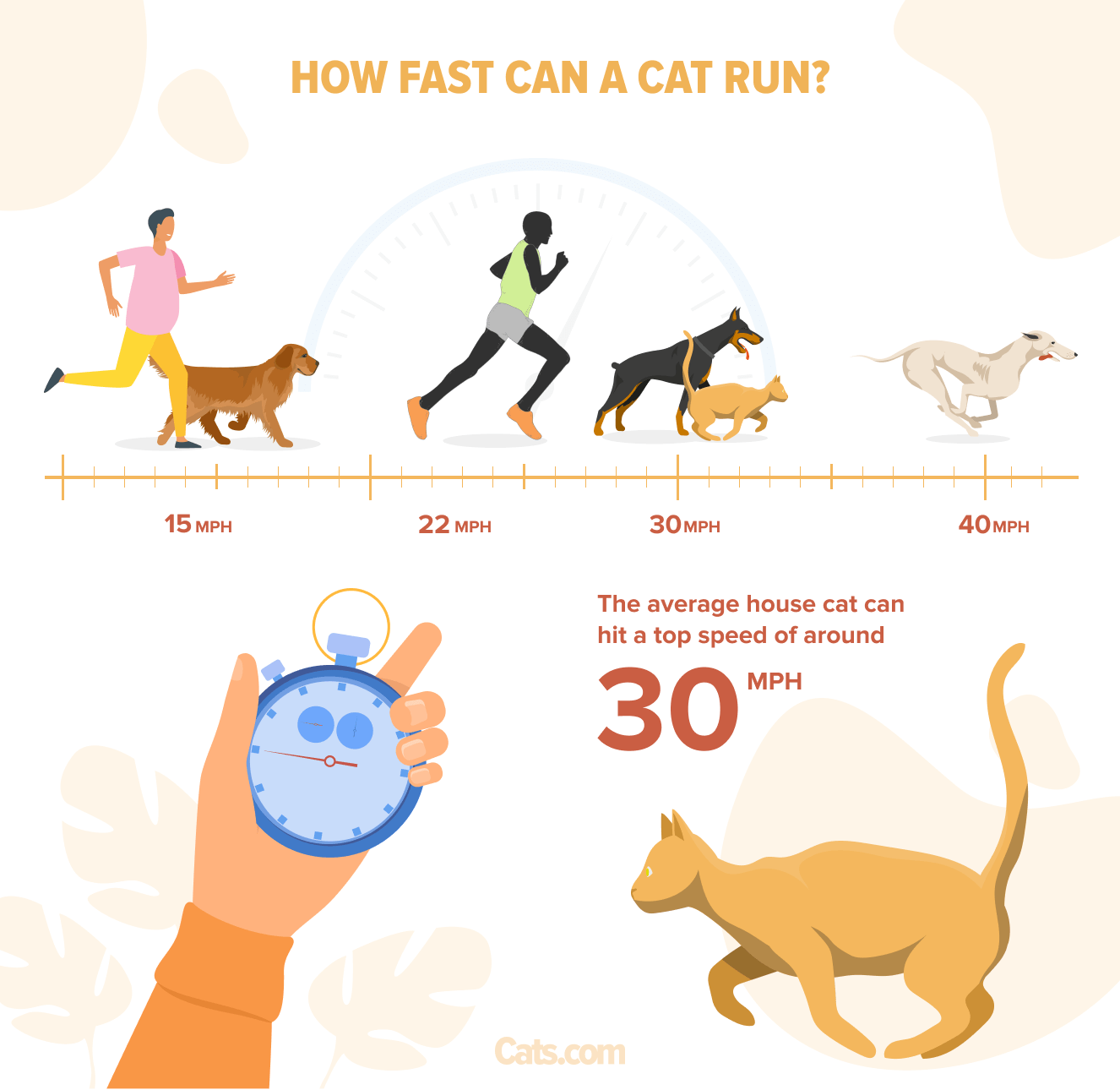 While a cat’s speed is dependent on several factors, the average house cat can hit a top speed of around 30 miles per hour.

In comparison, the fastest human on record was clocked at 27.33 miles per hour. That was the Olympic champion Usain Bolt, who clocked that speed after training for months for that specific race.

The tabby in your living room isn’t on a special diet or training plan, and yet he could still outrun the fastest man in the world—if he was properly motivated. A more average human athlete can typically run around 22 miles per hour, and a person who isn’t paid for their athletic ability probably tops out at around 15 miles per hour.

Can Cats Run Faster Than Dogs?

Cats are even faster than most dogs. A dog’s speed varies a lot depending on breed. In general, however, dogs run somewhere between 15 and 25 miles per hour. Some breeds, like the German Shepherd, Border Collie, and Doberman Pinscher, can get up to 30 miles per hour.

And, of course, we can’t dismiss the Greyhound with its top speed of 40 miles per hour. When you consider the size of the animals in question, however, a cat’s speed is even more impressive. Cat legs are considerably shorter than a German Shepherd’s, and yet a race between the two would probably require a photo finish.

Your living room lion can’t compete with a cheetah, but house cats can hold their own when compared to other big cat species. The bobcat, for example, ties the domestic cat at 30 miles per hour. Your pampered pet could even run faster than a sand cat (a sand cat’s average speed is around 25 miles per hour). 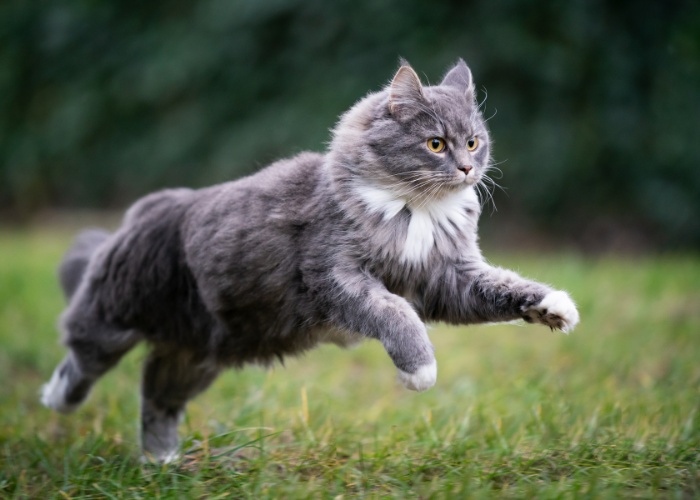 Your cat’s back legs are packed with muscle. That strength helps propel them forward with each stride.

What Makes Cats So Fast?

Some may argue of course that cats are faster than humans because they have double the number of legs. When it comes to speed, however, the number of legs isn’t as important as how muscular they are. Your cat’s back legs are packed with muscle. That strength helps propel them forward with each stride.

Working in concert with those muscular legs is the feline spine. A cat’s spine is especially flexible. It can compress and expand to act as a sort of spring that launches the cat forward. This also gives the cat a long stride so they can cover more ground in one bound.

Most cats are lithe and slim. This kind of body shape makes them aerodynamic. They meet less air resistance when they run and experience less drag than wider, bulkier animals.

They Run on Their Toes

Cats are what’s called digitigrade. This means they walk on their toes as opposed to the bottoms of their feet like humans. Take a closer look at your cat’s paws while they’re walking, and you’ll see the backs of their feet are actually lifted slightly off the ground. This allows them to move more quickly and with greater agility. 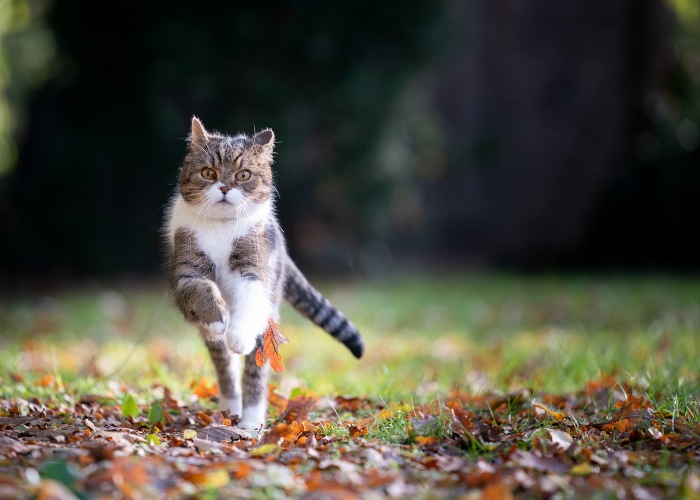 Speed varies depending on how a cat is built physically, and personality plays a role, too.

Other Factors That Affect Speed

Cats can run up to 30 miles per hour, but there are several factors that influence a specific cat’s speed. Not every cat you see is capable of reaching that high speed. Like with humans, there is a wide range when it comes to feline athletic ability.

Some cat breeds are faster than others. It depends on how the cat is built physically, and personality plays a role as well. Some cat breeds are especially aerodynamic or more closely related to speedy wild cats. The Abyssinian, Manx, Bengal, Egyptian Mau, and Savannah are some of the fastest cat breeds out there. On the other end of the scale, the Munchkin, British Shorthair, American Shorthair, Persian, and Ragdoll cats are some of the slowest.

The Association for Pet Obesity reports that around 60% of pet cats in the United States are overweight. This means there are millions of cats suffering from health issues related to being too heavy. That extra strain on their joints significantly affects how they move.

If your cat is on the chunky side, it’s not possible for them to reach peak physical performance. The more overweight a cat is, the slower they will be. Only cats at their ideal weight will reach that 30 miles per hour gold standard.

Cats are intelligent and independent. They can also be stubborn. Your feline best friend isn’t going to start sprinting at top speed just because you ask him too. He might not even reach top speed while racing down the hallway after that catnip mouse.

Cats have to be properly motivated if you want to clock them at their fastest speed. Most cats don’t run as fast as they can unless they’re chasing down prey or escaping danger.

Overall, cats are built for speed and agility. When they’re healthy and properly motivated, you’ll be surprised at how quick your cat can move. 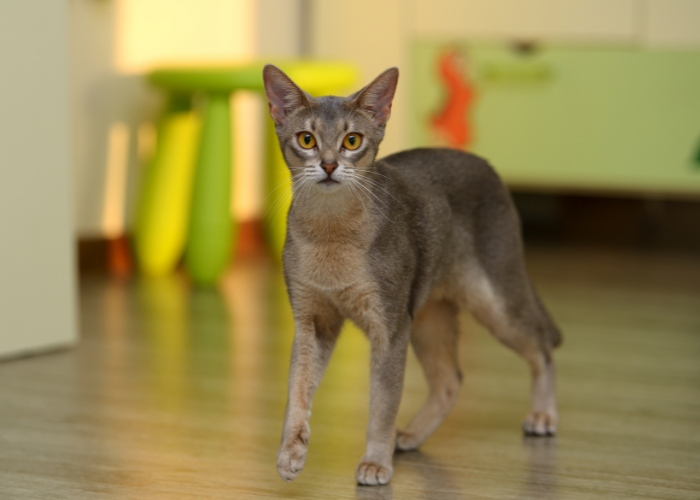 The Abyssinian, Manx, Bengal, Egyptian Mau, and Savannah are some of the fastest cat breeds out there.

One thought on “How Fast Can A Cat Run?”