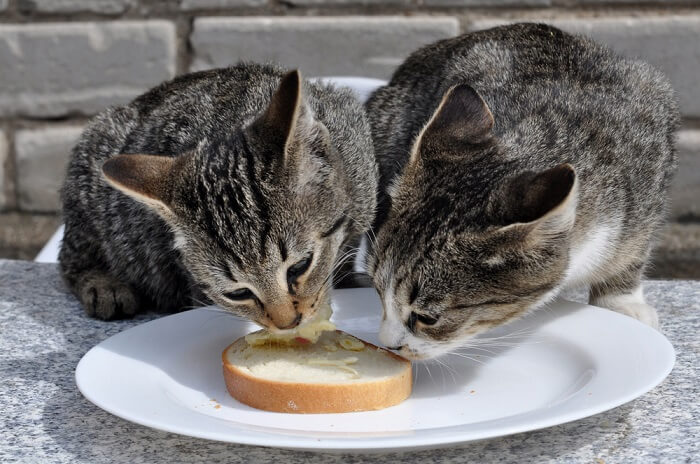 In my house, you can’t leave a loaf of bread or a bread roll out on the countertop for fear of the cat eating it. Many cats show an interest in eating bread, and if you’ve seen your cat tucking into your sandwich, you’ve likely wondered if this food is safe for cats.

Let’s take a look at how much bread cats can eat, how often it’s safe for them to consume it, and more.

Although most types of bread are safe, it should only be fed to cats as a very occasional treat. Even the crusts from your toast are high in calories and contain hardly any nutrition for your cat. 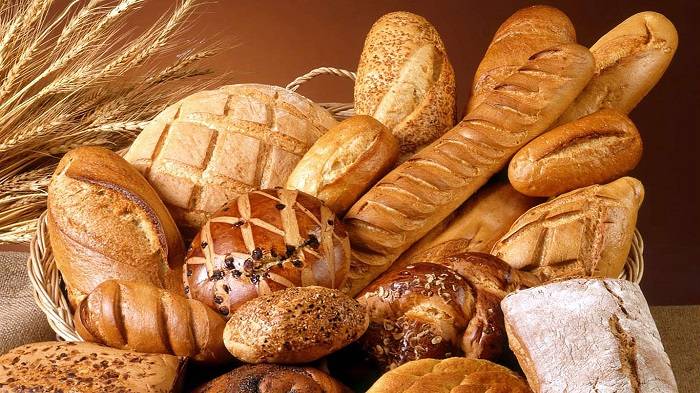 There are as many types of bread in the world as there are cultures, and they’re all different. Bread is one of the most ancient forms of cooking and is eaten worldwide.

In the West, we tend to eat our bread in loaves – although even that various hugely, from a nice sourdough loaf from an artisan bakery, to a store-bought white bread loaf in a plastic bag. In other countries, unleavened bread is more common, such as the Tortilla of Mexico and the Chapatti of India.

Bread can also be a base for cooking other ingredients. Pizza bases are made from bread, and various crusts are baked onto bread rolls to make cheesy bread, tiger bread, onion bread, and seeded breads. 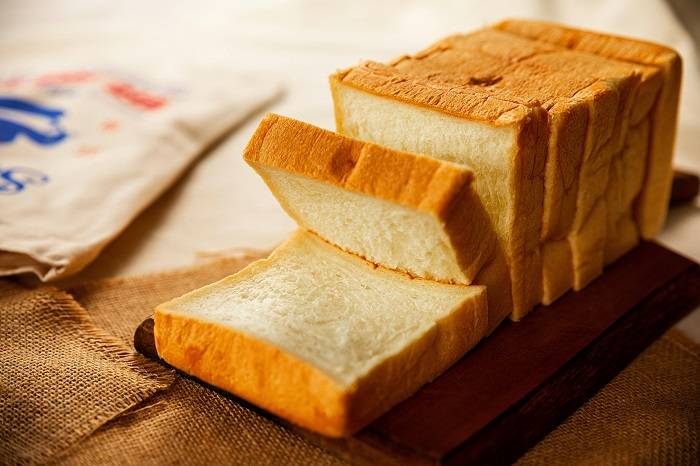 As you’d expect, it’s impossible to list the nutrition for ‘bread’, when there are so many different types. Even a ‘normal’ white loaf can be made with egg, milk, oil, or butter, and have various possible additives such as vitamins.

We looked at 100g of white bread, which the USDA lists as having approximately: 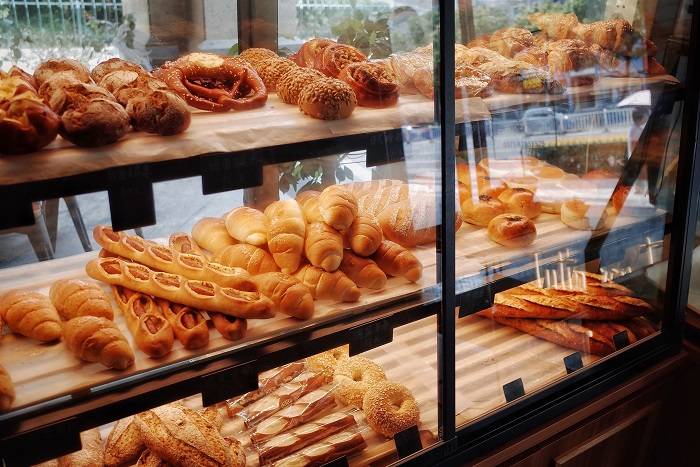 Bread’s nutritional benefits can vary as much as bread itself but, on the whole, bread is not that nutritious to cat owners or their feline friends! Bread is mostly made of carbs and, since cats don’t have much carbohydrate requirement, it doesn’t provide them with much nutritional value.

Is Bread Good For Cats? 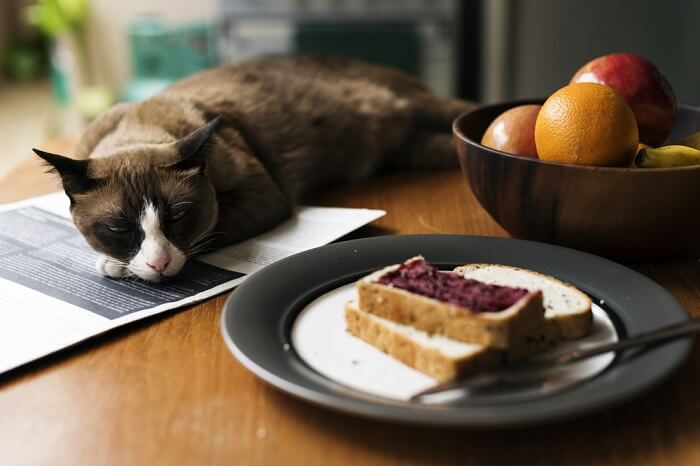 If your cat has just snatched a bread roll off the counter, don’t worry. Cats can eat bread safely in most instances, although there’s a bit more to the story:

Too Much Bread Is Bad! 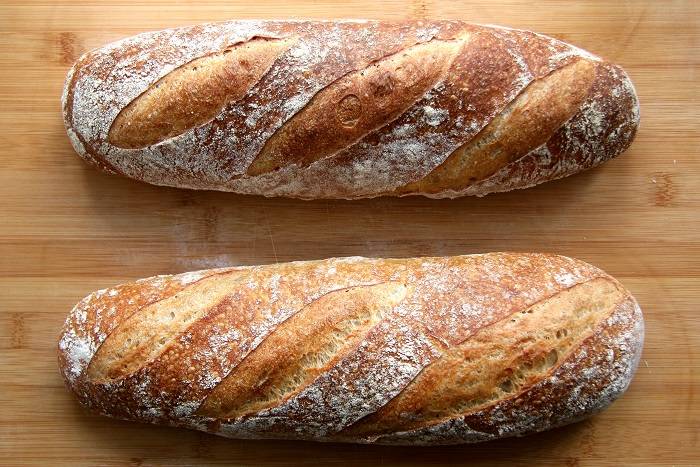 A bread roll may be the perfect size for a human, but it’s far too much for a cat- it would be like you eating 15 bread rolls in one go!

If you think you’ll feel ill after that, you can only imagine what your poor cat is going to go through. Whilst it’s fine for cats to have small amounts of bread as an occasional treat or to help them swallow a pill, you should call your vet if your cat gets into a large amount of bread. 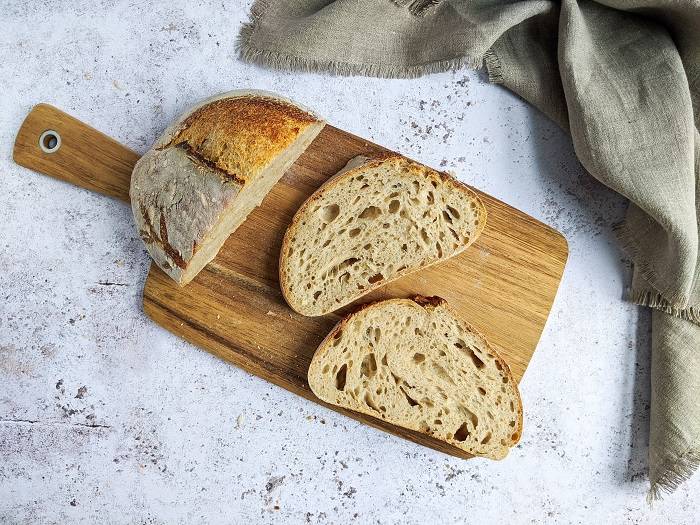 Bread is high in calories but not high in nutrients. In other words, it is considered ‘empty’ calories for cats. Giving too many excess calories can lead to weight gain and, with feline obesity already affecting around 50% of cats and on the increase, attention should be paid to calorie intake for all our feline friends. 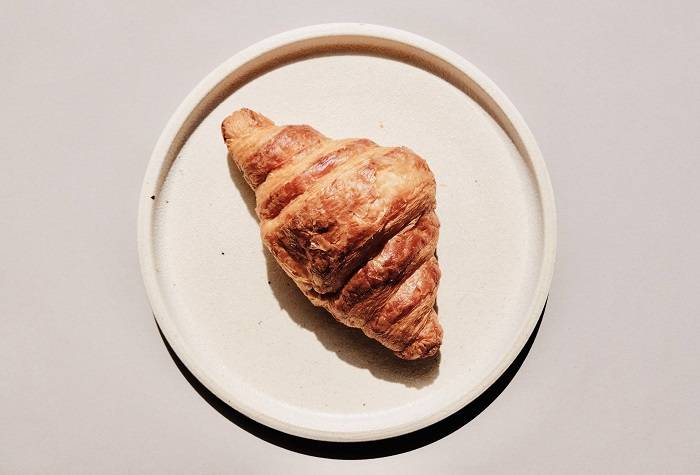 Raw bread dough is a definite no-no for cats. Raw dough contains active yeast, which causes the bread to rise. And if this rising happens in your cat’s stomach, it can cause serious problems such as bloating or an obstruction in the digestive system.

Not only this, but yeast produces ethanol as a byproduct of fermentation – when the dough ferments in your cat’s stomach, the ethanol can quickly cause your cat to become ill, as cats are much more prone to alcohol poisoning than humans are. 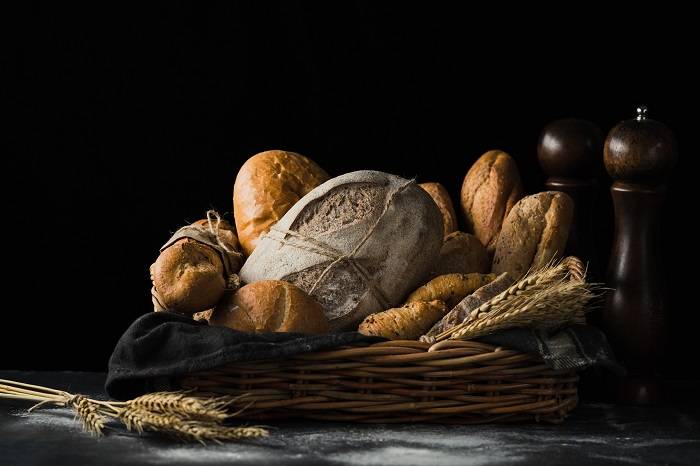 Watch out for bread baked with added ingredients, as these may be toxic to cats.

Ingredients to avoid in bread for cats include:

How Much Bread Can A Cat Eat? 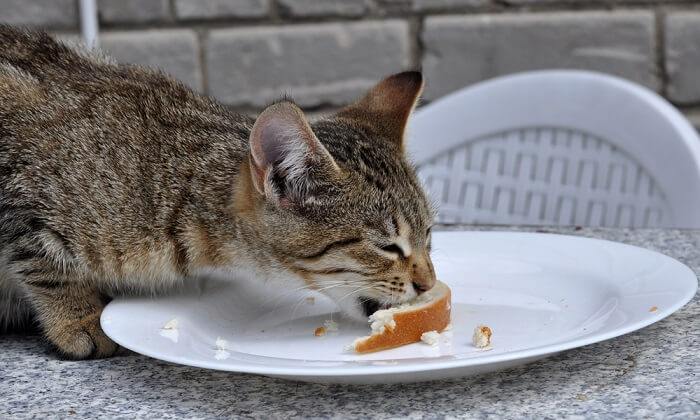 If your cat does nibble on a small piece of baked bread as a one-off, don’t panic. Don’t let them eat any more, and call your vet if it contains any worrying ingredients.

Chances are your cat will be none the worse for their misadventure, although they might have stomach ache if they ate a lot. Observe your cat closely for any symptoms and call your vet if you are concerned.

If your cat really likes bread, you can try feeding your cat small pieces of safe breads occasionally, but let’s discuss some caveats: 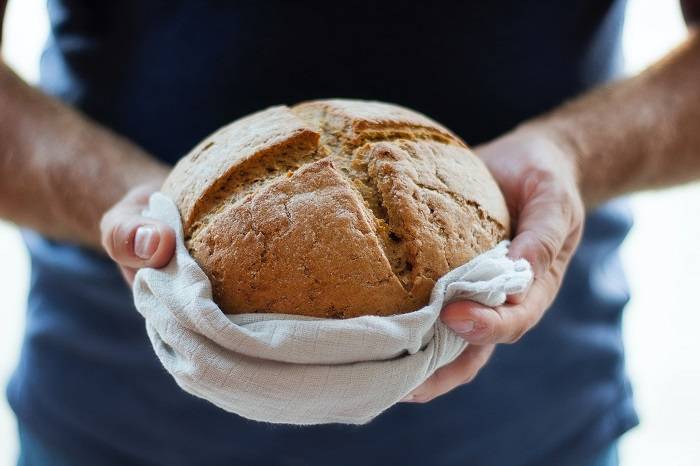 Although most types of bread are safe, it should only be fed to cats as a very occasional treat. Even the crusts from your toast are high in calories and contain hardly any nutrition for your cat.

If you do feed bread to your cat, feed only a small piece of bread. A far better option is to feed fruits and veggies as part of a healthy, balanced diet.

Is it okay for cats to eat bread?

A small amount of bread is unlikely to do your cat any harm, assuming it has no additives that are toxic. However, bread is not good for cats and you’d be far better to give your cats something healthier to eat!

Why is my cat obsessed with eating bread?

Cats may be carnivores, but they're also survivors, and it’s likely they can sense the high calories in bread like a child can sense sweets. Unfortunately, that doesn’t mean it’s good for them! If your cat has suddenly developed an appetite, it’s a good idea to get them checked at the vets, as a ravenous appetite is a symptom of several health problems.

What human foods can cats eat?

Cats can eat a variety of human foods, but their favorites include courgette, cooked chicken, cooked prawns, blueberries, and melons such as cantaloupe.

Cat Health
What To Do If You See Blood In Your Cat’s Stool?
JOIN THE FAMILY