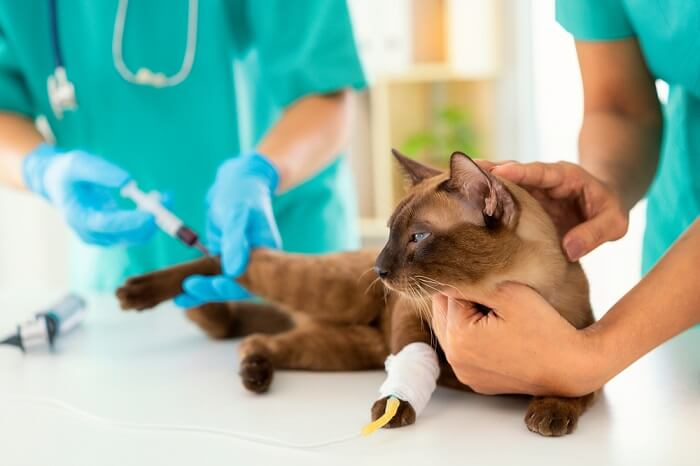 Denamarin, manufactured by Nutramax, is a supplement used in veterinary medicine as a liver protectant and to promote healthy liver function. In this article you’ll learn about the ingredients in Denamarin, what they do for liver health, important dosing information, and some frequently asked questions.

Medication Type:
Neutraceutical liver protectant
Form:
Oral tablets
Prescription Required?:
No
FDA Approved?:
As a neutraceutical, FDA approval is not required. However, it is developed for use in dogs and cats.
Life Stage:
No life stage restrictions are listed, though most pets taking this are adults or seniors.
Brand Names:
Denamarin, Denamarin Advanced
Common Names:
S-adenosylmethionine (SAMe)/silybin
Available Dosages:
For cats, the "For cats and small dogs up to 12 lbs" size, which contains 90mg of SAMe and 9mg of silybin. Large dosage sizes intended for dogs should not be used without consulting a veterinarian.
Expiration Range:
Product should be used before the expiration date on the package. Store in a cool, dry place not exceeding 87 degrees F (30 degrees C). The tablets are sensitive to moisture and extreme heat and should not be split or crumbled.

About Denamarin For Cats 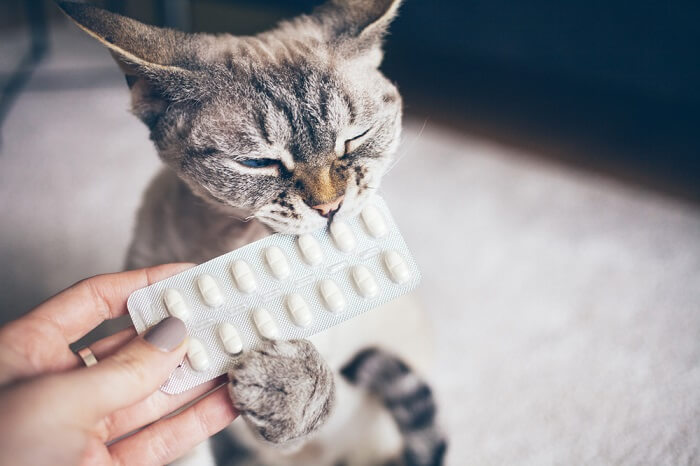 As a nutraceutical, Denamarin is not considered a medication, and more of a health supplement for liver support, but it is used very widely in veterinary medicine as an adjunctive treatment for various kinds of liver disease, as well as for pets on long-term medications that may stress or damage liver function over time.

SAMe is a natural compound made by cells throughout the body. It is an essential part of three major metabolism pathways that the liver uses.

Silybin is the major active component of silymarin, which is found naturally in the milk thistle plant. Silybin acts as a liver protectant chiefly through preventing toxin penetration into liver cells. It also inhibits toxic and inflammatory effects on cells, and acts as an antioxidant and free radical scavenger.

Free radicals are unstable atoms that roam the body, causing damage to cells. Antioxidants acting as free radical scavengers have the ability to bind these atoms and deactivate them. Many compounds in nature can act as antioxidants.

While SAMe and silymarin may be found themselves as supplements, their combination in a dosage form for pets is proprietary to the Denamarin product.

What Does Denamarin Do For Cats? 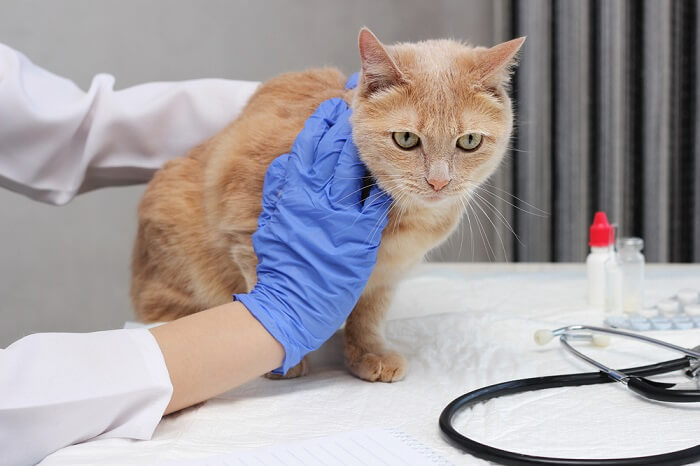 The ingredients in Denamarin can help to protect liver cells from toxins and inflammatory damage through the actions of silybin, as well as improve liver function through SAMe’s involvement with major metabolic processes of the liver.

Denamarin may be recommended as part of a treatment plan for a variety of circumstances where the liver is involved. In cats, this can include conditions where liver enzymes are elevated on bloodwork like in cholangitis/cholangiohepatitis syndrome, hepatic lipidosis, and feline triad disease/triaditis.

Denamarin may also be used when treating toxicities that affect the liver, including acetaminophen toxicity. There are also some medications necessary to use to treat some types of diseases, and these medications may put additional stress or strain on the liver. Denamarin can be helpful in protecting the liver from some of these effects while the medication is being used.

Side Effects Of Denamarin For Cats 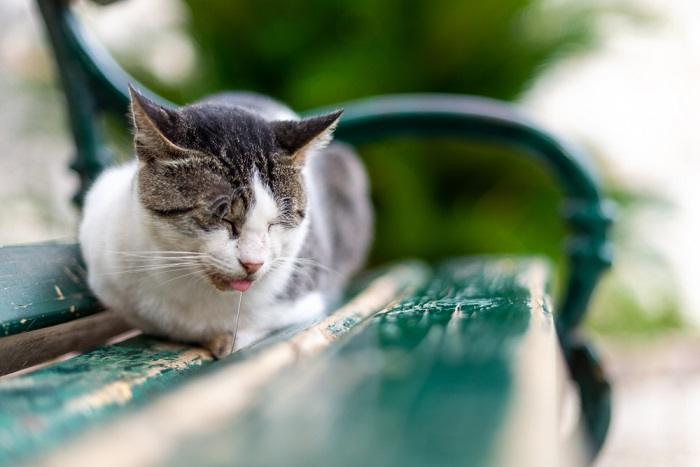 Fortunately, side effects to Denamarin appear to be minimal. Toxicity studies have shown no adverse effects in pets at typical doses that are prescribed, and overdoses are unlikely to cause serious illness. In people, side effects of SAMe are also, rare but vomiting and decreased appetite have been reported.

It is important to remember that administration of a tablet to a cat may result in a distaste response, either to the medication itself or to the process of medicating. In some cats, this may lead to hypersalivation (drooling), hiding, and rarely vomiting.

Although natural products and considered very safe, SAMe and silybin have not been studied in pregnant or nursing queens, so Denamarin should be used cautiously in these kitties. 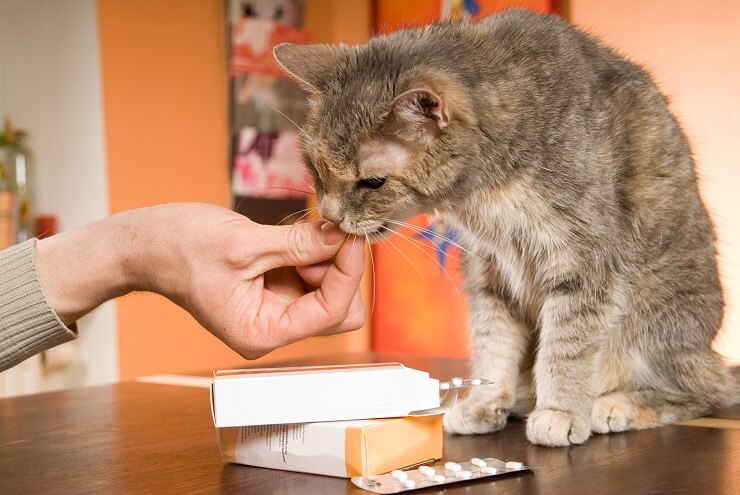 Denamarin is given on an empty stomach, but you can hide the tablet in a small amount of food if necessary.

There is only one dosage of Denamarin available for cats, which is the Denamarin for Cats and Small Dogs product, which contains 90mg of SAMe and 9mg of silybin.

Denamarin tablets are typically dosed once a day per the manufacturer’s advice. However, there are many reports that the most effective dosages for SAMe and silybin for certain conditions may need to be higher than the Denamarin label states.

Some patients on Denamarin long-term may also continue to benefit from administration every two to three days. This is why it is very important to follow your veterinarian’s instructions very carefully.

The Denamarin tablets should be kept in their original packaging until used and should not be crushed or split (i.e., you should not split larger doses formulated for dogs to give to a cat).

Denamarin must be given on an empty stomach. Approximately one hour before feeding or two hours after feeding, is best.

Dry pilling tablets is generally discouraged in cats. When giving a Denamarin tablet, you can give three to six milliliters of water immediately after administration to aid in its passage down to the stomach. If needed, a Denamarin tablet can be inserted into a very small amount of food, or something like a Pill Pocket, to make administration easier.

While SAMe and silybin/silymarin (or milk thistle) can be found in supplement form for humans as well, these products can have a great degree of variability in active ingredients and are not designed for pets.

Denamarin has been developed for and formulated for pets. Always make sure to discuss any supplements you might plan to use for your cat with your veterinarian. 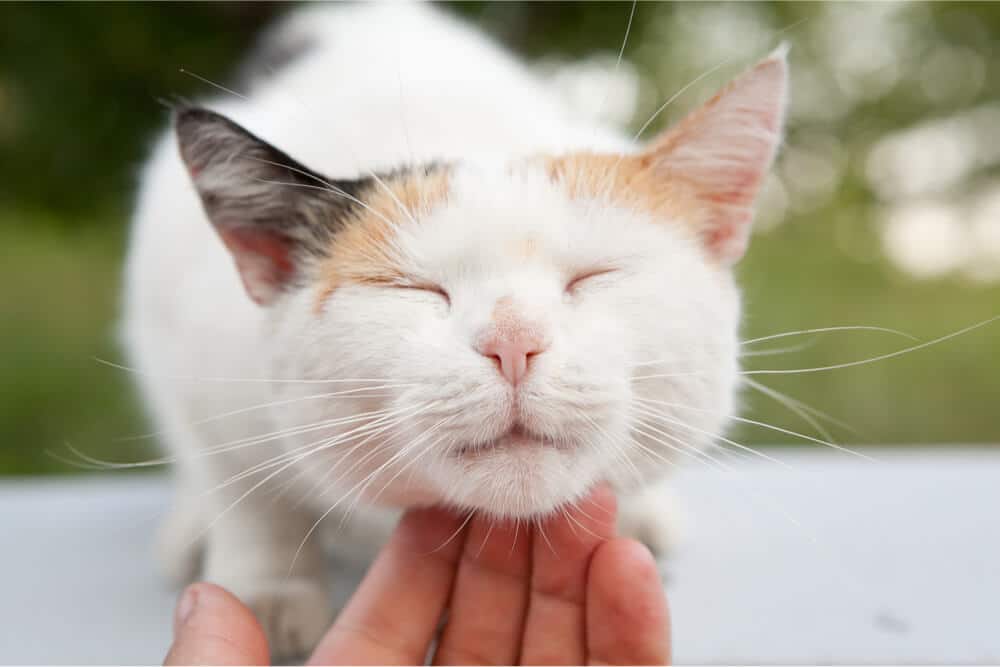 It can be normal for some cats to drool a little when they are very relaxed and content.

Denamarin for cats is a very useful nutraceutical that is part of every vet’s toolbox for treating cats with liver disease or toxicities affecting the liver. It is generally very safe to use, though the need to give it without food can be a little challenging for some kitties.

Effective dosages may vary depending on the condition, necessitating following all veterinary instructions carefully.

What does Denamarin do for a cat?

Denamarin is a non-drug, nutraceutical supplement widely used by the veterinary profession to aid in treating certain types of liver disease or toxicities affecting the liver in cats and dogs. It can also help to protect the liver from damage if a cat has another medical condition requiring a medication that may put stress or strain on liver function and metabolism.

Can Denamarin be given to cats?

Yes, there is a specific dosage size of Denamarin developed for cats. Denamarin is considered very safe to use in cats and side effects are very uncommon.

Why does Denamarin have to be given on an empty stomach?

Primarily, this is because the presence of food has shown to decrease the absorption of the SAM-e ingredient. So while it can technically be given safely with food, the product will lose some of its efficacy.

Dry pilling cats is generally not recommended because tablets have been shown to stay lodged in the esophagus, so any tablet given without food should be followed with three to six milliliters of water.

The manufacturer does also say that if necessary, Denamarin can be given disguised with a small amount of food, such as a Pill Pocket.

Can Denamarin advanced be used in cats?

Denamarin Advanced is very similar to regular Denamarin. The main difference is a variation in the SAMe component making it more bioavailable in the Advanced formulation.

Unlike regular Denamarin, Denamarin Advanced may only be available for purchase directly through your veterinarian. If you already have this at home for a canine companion, make sure to discuss with your veterinarian first before using it for your cat.

6 thoughts on “Denamarin For Cats: Overview, Dosage & Side Effects”