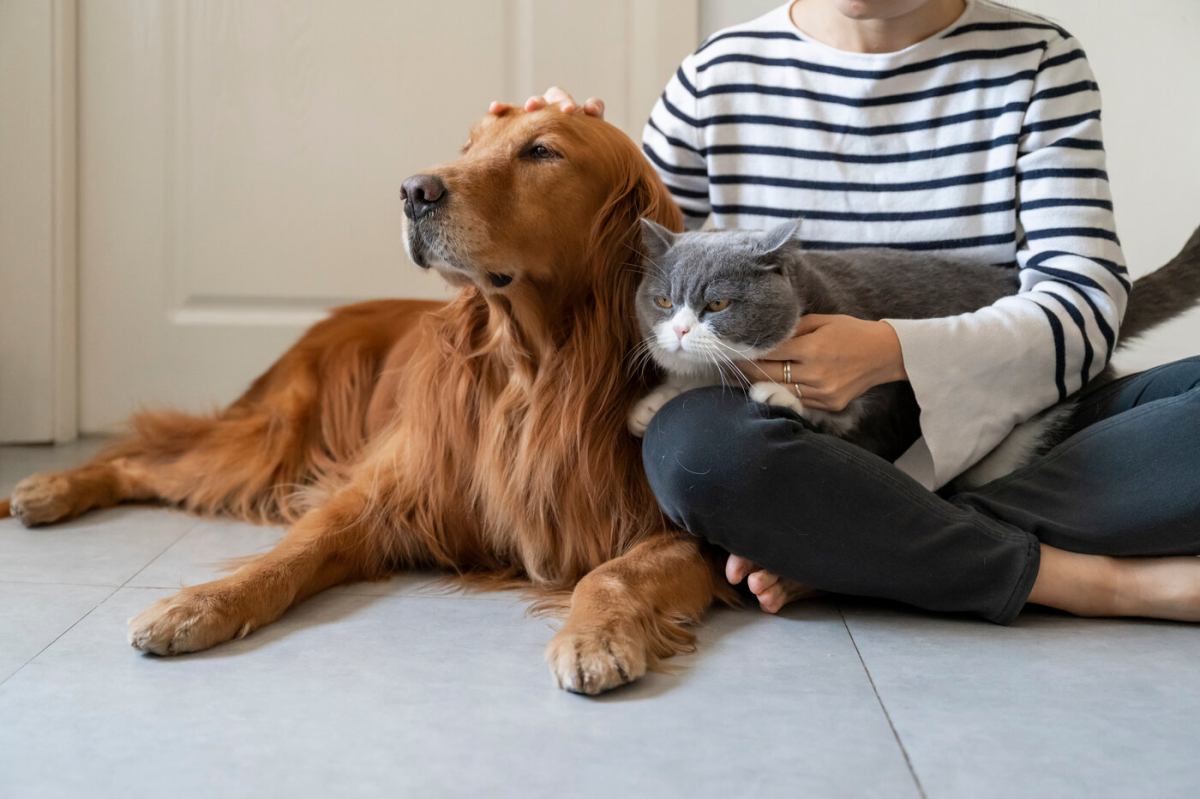 The old precept that cats and dogs don’t get along is so strong that the image of squabbling pets is found in everything from cartoons to everyday idioms. You might catch yourself saying the phrase, “They fight like cats and dogs,” when describing the behavior of rival siblings or politicians debating on TV. The truth is, however, that it is pleasantly common for cats and dogs to get along just fine.

Not only can they live harmoniously in the same house, some feline/canine duos even form strong friendships. A budding closeness or mutual tolerance, however, can be disrupted by one strong emotion: jealousy. Here’s what you need to know about jealousy and cats. 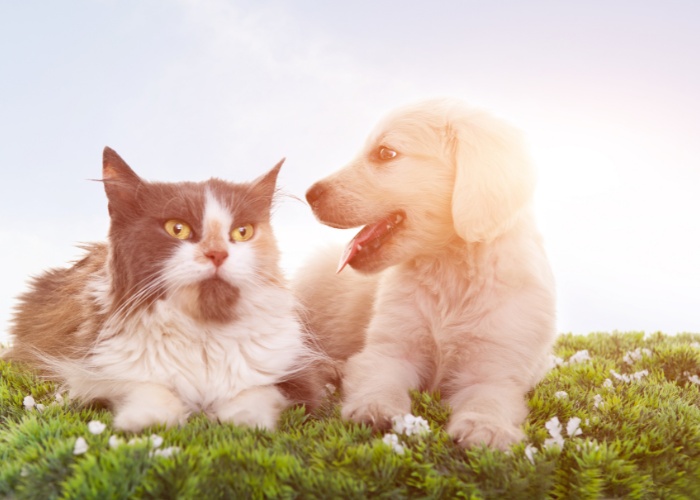 Animal behaviorists aren’t convinced that cats are capable of feeling jealousy in the same form as humans.

Jealousy is described as a feeling of “discontented or resentful longing aroused by someone else’s possessions, qualities, or luck.” Jealous people covet what others have, and it’s an unfortunately strong emotion that can be difficult to control. For cats, however, jealousy seems to be a bit different.

Animal behaviorists aren’t convinced that cats are capable of feeling jealousy in the same form as humans. Pet owners love to give their cats human qualities, but we have to remember that our feline friends are a completely different species. Their brains are wired differently, and they don’t always think and feel in the ways we’d expect.

In general, it is believed that cats can feel jealous, but the emotion is slightly different than human emotions. Instead of feeling resentment toward a dog because they wish they had something the dog has, experts believe cats feel territorial, possessive, and insecure.

Also Read: Do Cats Have Emotions?

When it comes down to daily life, these strong emotions aren’t much different than genuine jealousy. They cause the same kind of stress within a relationship and bring up similar conflicts within the home. 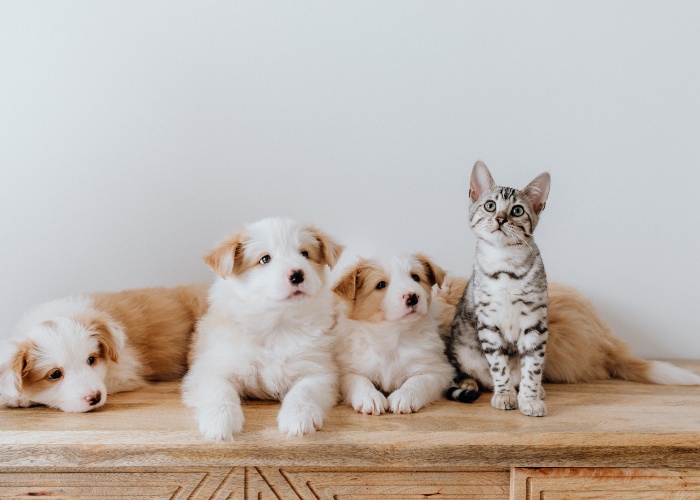 Why jealousy rears its ugly head is different for everyone. Like humans, some cats are naturally more sensitive than others.

Why Might a Cat be Jealous of a Dog?

Why jealousy rears its ugly head is different for everyone. Like humans, some cats are naturally more sensitive than others. These emotional felines are more likely to develop feelings of discontent centered around a canine family member. But even if your cat isn’t particularly emotional on a regular basis, they can still experience jealousy.

Cats can be jealous of people and even inanimate objects (“Stop staring at your phone and pet me, human!”). Dogs, however, seem to be particularly triggering for cats that live in multi-pet households. This likely has to do with the fact that most dogs are exuberantly friendly and outgoing. When a dog enters the family, people tend to gravitate toward their energy.

A dog will roam the house with confidence, eat out of the cat’s food bowl, invade the litter box, hog the couch, and take up the family’s time with their needs. All of these behaviors could be problematic for a resident cat.

As territorial animals, a resident cat will often protest having to share their home territory with a dog (or another new pet or unfamiliar human). Those territorial feelings can be translated as jealousy when the dog is sleeping on the best couch cushion or taking up room in the bed.

Physical boundaries and property can trigger a cat, and it’s also possible for felines to be jealous of the time their humans spend with the dog. This is especially true if the cat is accustomed to certain amounts of time and attention that is suddenly being shared with a dog. A cat will recognize when something in their life is different or lacking.

Part of their negative feelings will stem from the stress that accompanies a change in daily routine, but they might also link their displeasure to the dog. If a cat doesn’t feel like they’re receiving enough attention, it’s natural for them to feel possessive and jealous.

Cats can also act jealous of dogs when they haven’t received proper socialization. Early socialization is key to raising a confident companion. Kittens go through a phase when they are about 2-7 weeks old when they are the most open to new experiences. This is the perfect time for them to be exposed to different kinds of people, pets, and interactions.

Contrarily, if they spend this time missing out on certain experiences, it could negatively affect them in the future. If a cat goes through their whole kittenhood without ever meeting a dog, for example, that poor socialization could make it harder for them to accept a dog later in life. 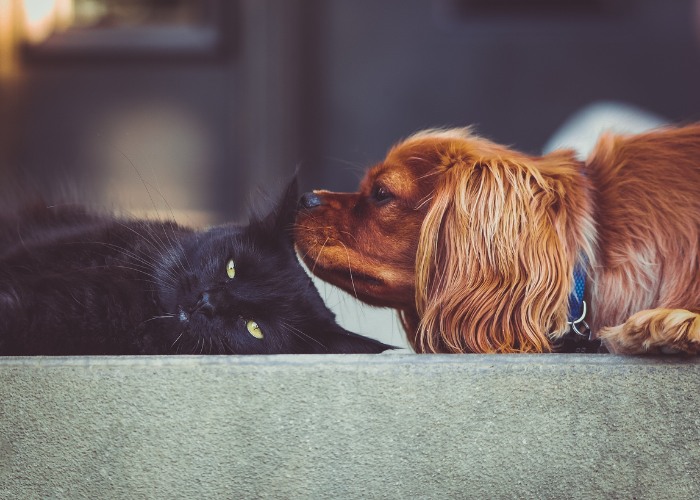 If you recently welcomed a dog into the family, the best way to ensure harmony between pets is to take their relationship slowly.

Signs Your Cat is Jealous of Your Dog

As with every new relationship, you can’t expect your cat and dog to be best buds on the first day. If you recently welcomed a new dog into the family, the best way to ensure harmony between pets is to take their relationship slowly and it’s quite normal to see your cat jealous of a new dog.

Limit their interactions for the first few weeks and don’t force them to spend time together. If your cat is still showing signs of discomfort months later, it’s possible they’re experiencing their version of jealousy.

Here are common jealous behaviors that suggest your cat is having issues with the dog.

How to Help a Jealous Cat

If you suspect your cat is jealous of your dog, it’s important to address the issue before the situation deteriorates even more. Unresolved jealousy could evolve into dangerous hatred that will force you to make difficult decisions for the sake of your pets’ safety.

The best thing you can do for a jealous cat is recognize their feelings of insecurity. Make more of an effort to spend quality one-on-one time with your cat. If your dog is the type to join in and steal a toy, play with your cat somewhere your dog can’t intrude. Give your cat at least 15 minutes every day of your undivided attention. Play with them, offer pets, and tell them in a loving tone how important they are to you.

It’s also important to give your cat personal space that is completely separate from the dog. Dogs have few boundaries, and they won’t hesitate to steal your cat’s bed or sniff through their litter box. This invasion will make your cat feel stressed. Set up blockades to keep the dog away from your cat’s stuff. Putting your cat’s resources and other important belongings behind a closed door and installing a cat door usually works well.

The last step in managing a jealous cat is helping them cope and understand that the dog is not a threat. You can do this by using positive reinforcement and essentially training them to accept the dog into the family. Every time the cat calmly sniffs the dog or grudgingly accepts the dog’s presence, offer a reward.

If you give treats and pets every time the cat has a positive interaction with the dog, they’ll eventually associate those good things with their new canine family member and realize, maybe, they’re not so bad after all.

Jealousy in cats can be difficult to deal with, but time, patience, and understanding can help everyone in the family get along. 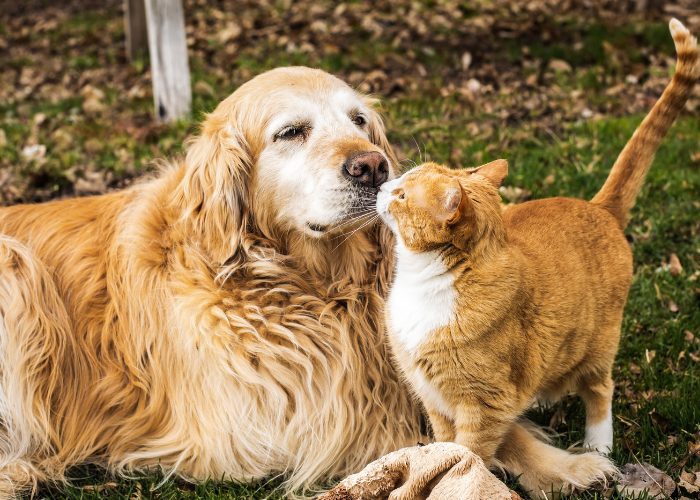 The last step in managing a jealous cat is helping them cope and understand that the dog is not a threat.