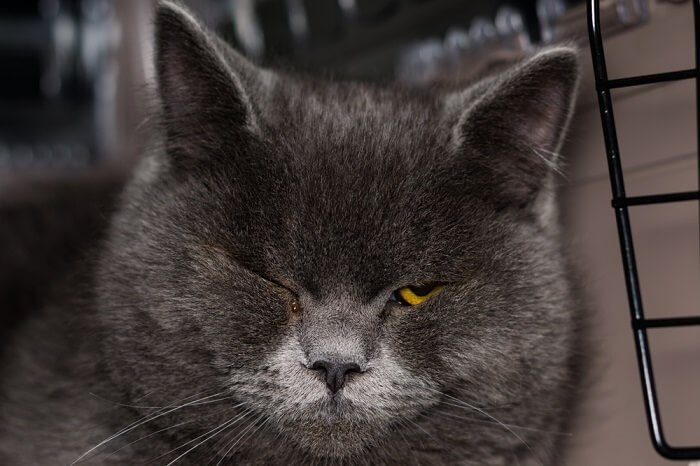 Entropion is a condition where the eyelid margin rolls inward, causing eyelashes and fur to rub on the surface of the eye.  Entropion in cats can happen at any age but is most common in kittens or elderly cats.

Entropion in cats can be caused by eye infections but may also cause an eye infection or damage to the eye surface (corneal ulceration) from the rubbing fur. Treatment of entropion depends on why it happened, but it usually is a combination of medications for the eye and surgical correction of the inward rolling of the eyelids.

Common Symptoms: Squinting, discharge from the eye, rubbing the eye, raised third eyelid, red eyes, cloudiness or other appearance change to the corneal surface of the eye.

Diagnosis: Entropion can be diagnosed during an exam. Fluorescein stain is used to check for any ulcers on the corneal surface due to constant abrasion by the inverted lid.

Requires Ongoing Medication: If surgery is not elected, topical and oral medications may be used to manage discomfort and complications, though none will be curative.

Treatment Options: Surgery to correct the inverted lid is treatment of choice. Topical and oral medications may be used to help manage symptoms and complications, like corneal ulcers. Hyaluronic acid injection may be an option for some cases. Temporary eyelid tacking may be used in younger pets for certain cases of entropion that may resolve.

What Is Entropion In Cats? 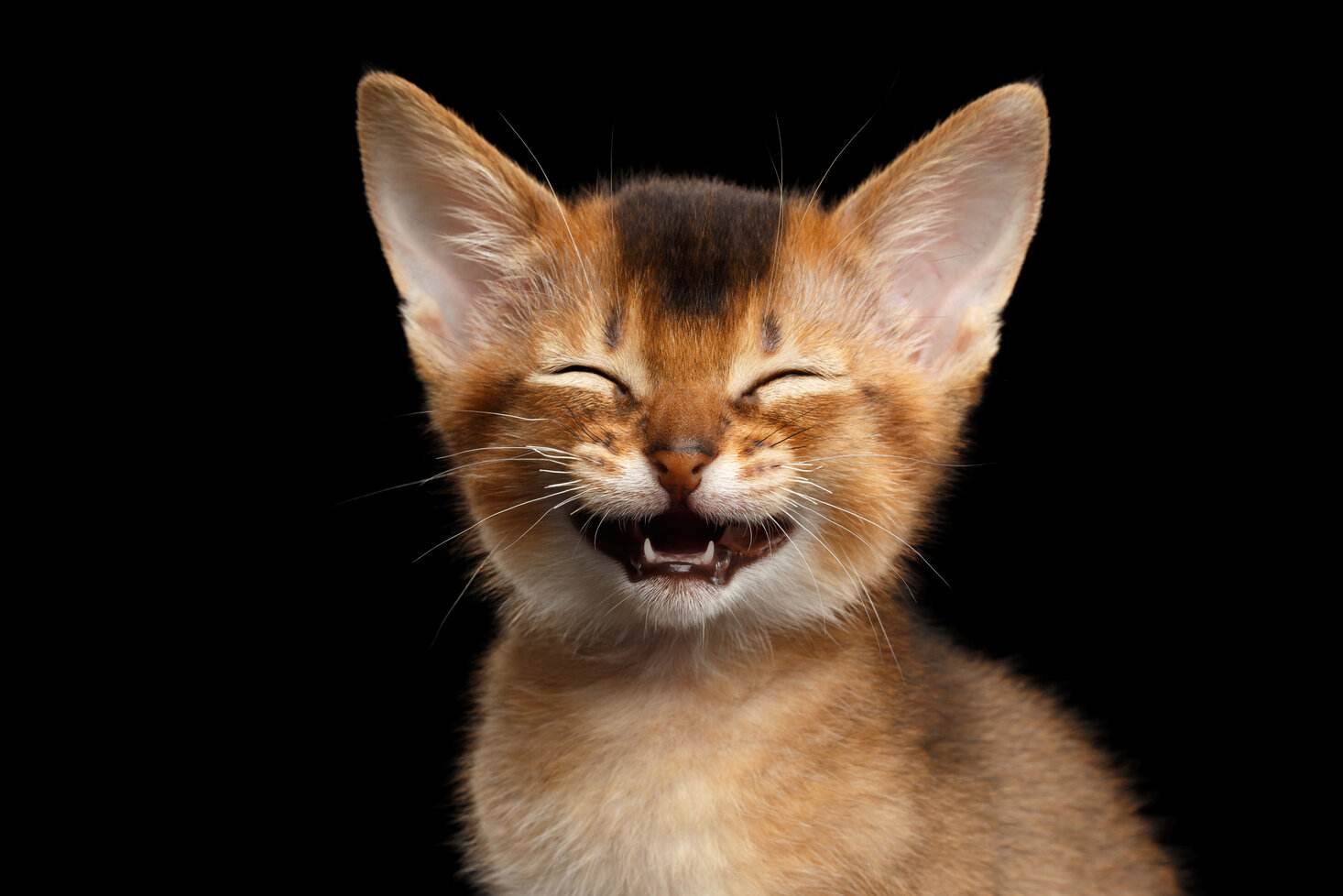 Entropion can develop in either the upper eyelid or the lower eyelid but is most common in the lower lid in cats. Entropion typically occurs in young cats less than a year of age and elderly cats older than 10 years of age, but any age cat can become affected.

Causes Of Entropion In Cats 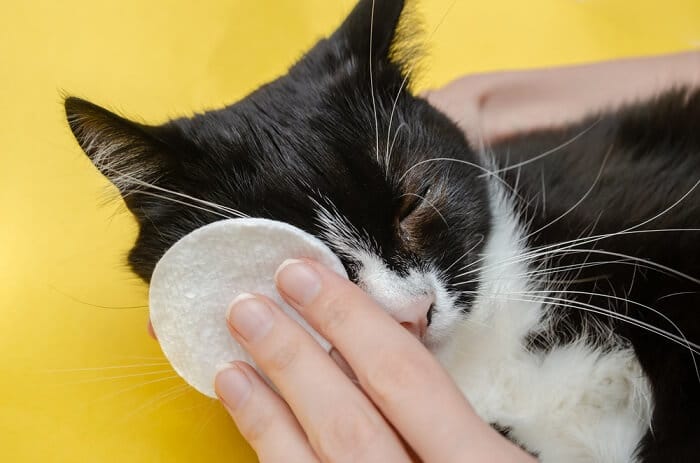 In young cats, entropion is most often caused by chronic squinting from eye infections which is called “spastic entropion”.

Kittens commonly get eye infections from viruses and bacteria which cause painful conditions like conjunctivitis and corneal ulcers.

The eye pain causes intense squinting, which eventually causes the eyelid edge to flip inward, resulting in entropion.  The rubbing fur from the entropion often worsens the eye pain, causing even more squinting and worsening of the entropion, leading to a vicious cycle of pain and further damage.

Eye Sinkage Due to Age 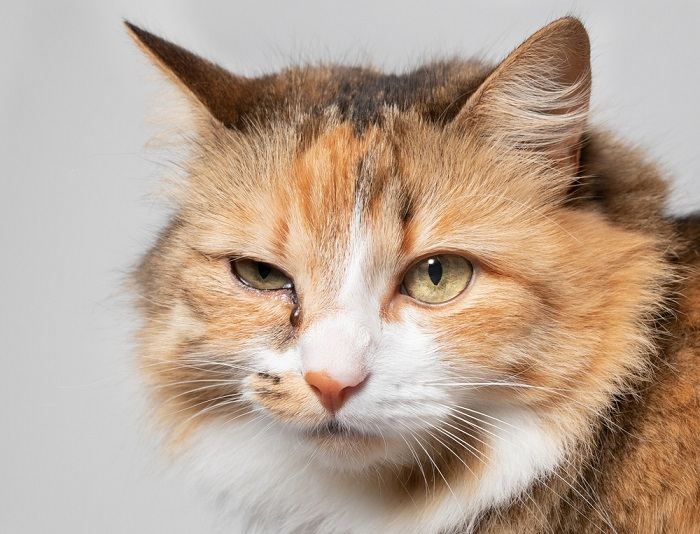 In elderly cats, entropion most often develops due to the eye sinking deeper into the eye socket.  As cats age, they lose fat and muscle from behind their eye leading to the sunken appearance of their eyes.

As the eye sinks, the eyelid edges also sink.  Eventually, the sunken eyelids flip inward resulting in entropion.  The irritation from the eyelid fur often causes more squinting and the entropion to worsen over time. 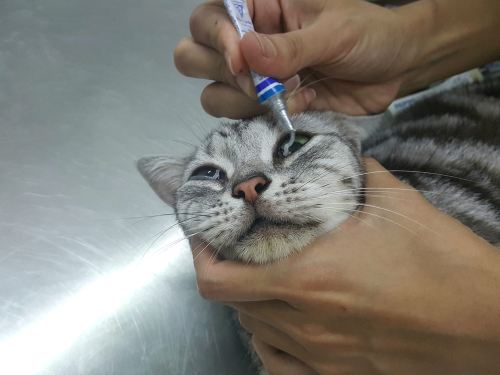 Cats that are brachycephalic, meaning they have short noses and bulgy eyes like Persians, Himalayans, and Burmese can have entropion related to this facial conformation. The short nose and bulgy eyes cause crowding below the eye, pushing the inner, lower eyelids towards the eyes leading to inversion of the eyelid margin and entropion.

Entropion can also be a developmental condition seen in young, un-neutered male cats of the larger cat breeds, such as Maine Coons.  These cats tend to have very large jowls, or cheek tissue, and this can cause the lower eyelids to be pushed upwards towards the eyes, leading to entropion.

Entropion is hereditary when it is caused by breed-related facial features, such as in the Persian, Himalayan, and Burmese breeds. This can also be referred to as primary entropion, meaning that it is related to the breed characteristics and was not caused by another eye problem (like conjunctivitis, for example).

Symptoms Of Entropion In Cats 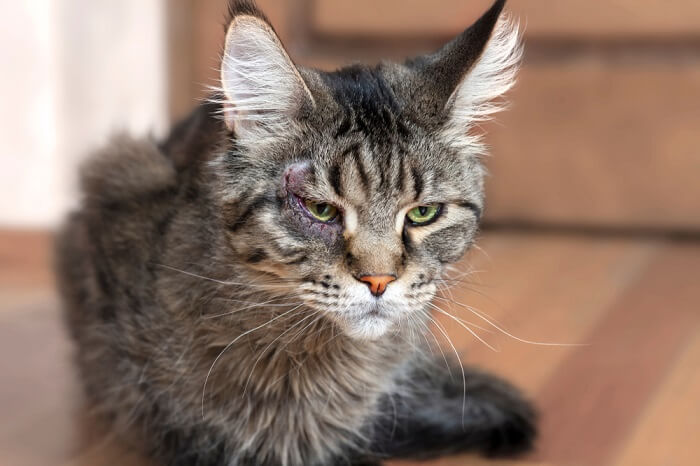 The symptoms of entropion in cats include squinting, a sunken appearance to the eye, and more.

Entropion causes the fur to rub on the eye surface from the inward rolling of the eyelids, causing irritation and ocular pain.

Entropion can develop in one eye or both eyes depending on the cause, and the eyes may have different symptoms if one eye is worse. Since these symptoms can develop with many different eye diseases, it is very important to have your cat examined by a veterinarian soon after symptoms start.

Entropion is diagnosed during a complete eye exam, which will also likely include a specialized green dye (fluorescein stain) test to check your cat’s eye for a corneal ulcer from the entropion.

Treatment Of Entropion In Cats 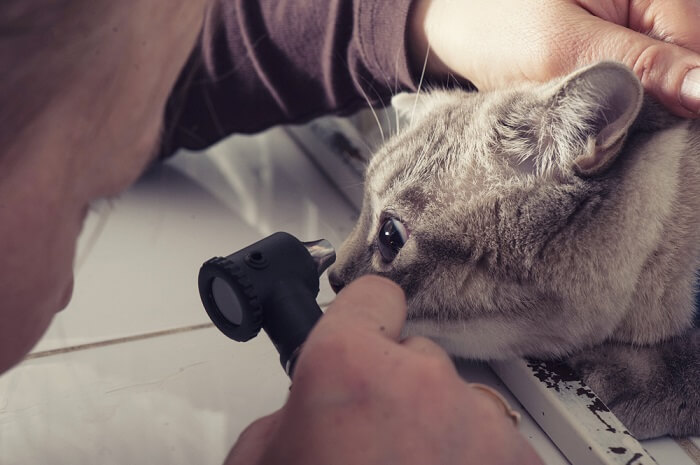 Entropion is most often treated with eyelid surgery.  While there are a few different techniques, entropion surgery involves removing a small wedge or “smile-shaped” piece of fur and skin from below the abnormal eyelid margin.

When this area is stitched closed with delicate sutures, the eyelid margin is pulled away from the eye, flipping it back into the normal position. Entropion surgery in cats has a very good success rate.

Your vet may recommend delaying entropion surgery if your cat is a young, larger breed, male cat because sometimes they will grow out of it.

This technique is appealing as it is usually performed without anesthesia, which can be less expensive and less risky for older cats. The outcome is much harder to predict and control, however, as compared to traditional surgical correction.

Antibiotic eye medications are often used in cats with entropion to prevent a bacterial infection from developing, especially if there is a corneal ulcer.  Sometimes pain medications are recommended even without surgery, but it is important to note that these are given by mouth – there are no pain-relieving eye drops for cats.

Your vet may use a numbing eye drop during the eye exam, but this cannot be used as an on-going treatment for pain.

How Much Does Entropion Surgery Cost For Cats? 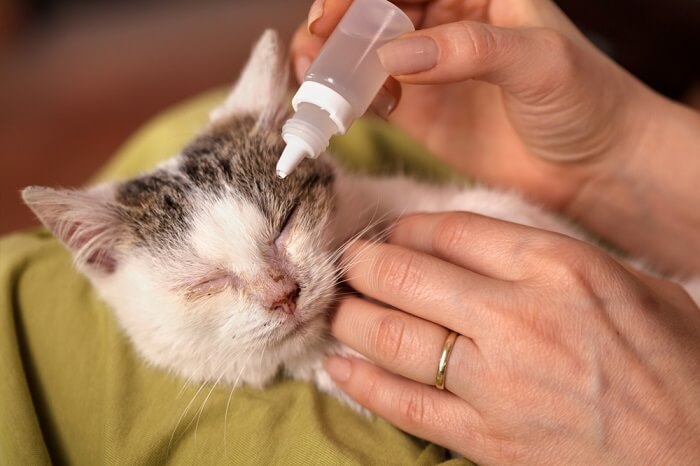 Surgery is the most common treatment for entropion in cats. The price of surgery depends on a range of factors, including where you live, who performs the surgery, and how complicated the surgery will be.

The cost of entropion surgery depends on a few main factors:

These costs should include anesthesia and post-operative medications.  Some veterinarians will also include the initial post-operative recheck exam with surgery fees. 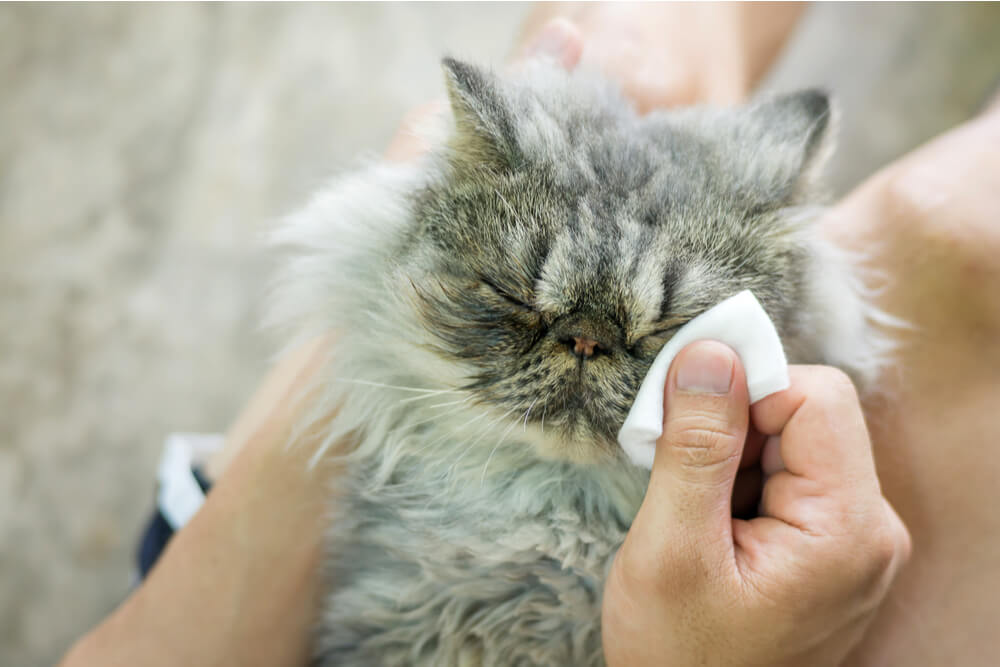 You may also need to clean your cat’s eyes and ears using a damp cotton ball or cloth.

After entropion surgery for your cat, a few things are to be expected:

As with any surgery, it is important to monitor closely for signs of infection within the incision or on the eye.  Signs to watch for include: 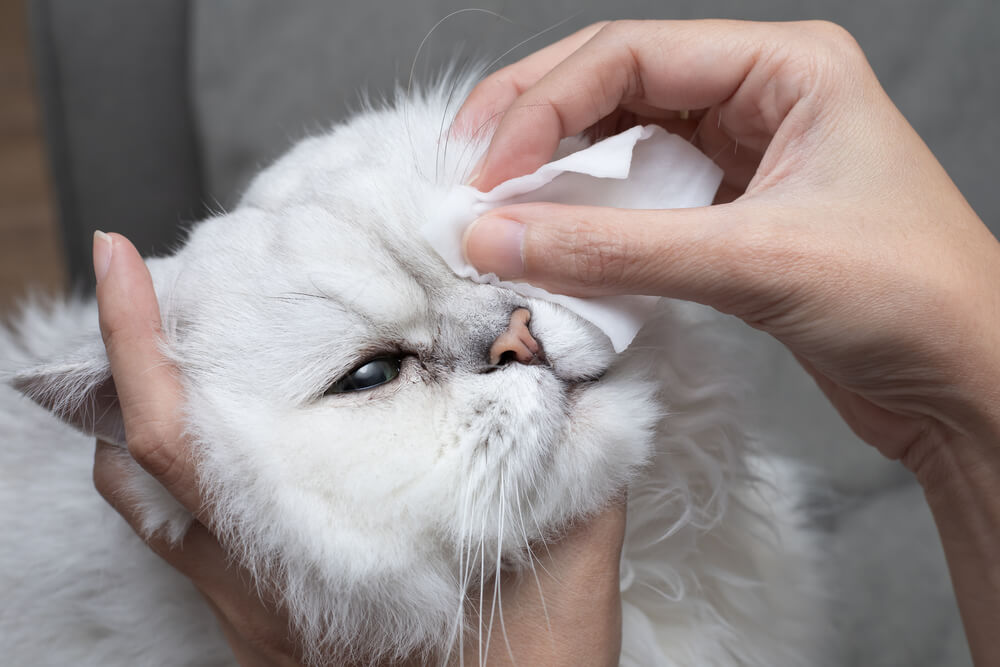 To prevent entropion from chronic squinting, eye infections should be treated early, and you should have your cat re-evaluated if the squinting comes back at any time after treatment.

Entropion in elderly cats from sunken eyes can’t really be prevented. However, some research has shown that both eyes should have surgery even if the entropion is only in one eye.

For the eye without entropion, an eyelid shortening surgery performed at the same time can prevent entropion from developing later on. 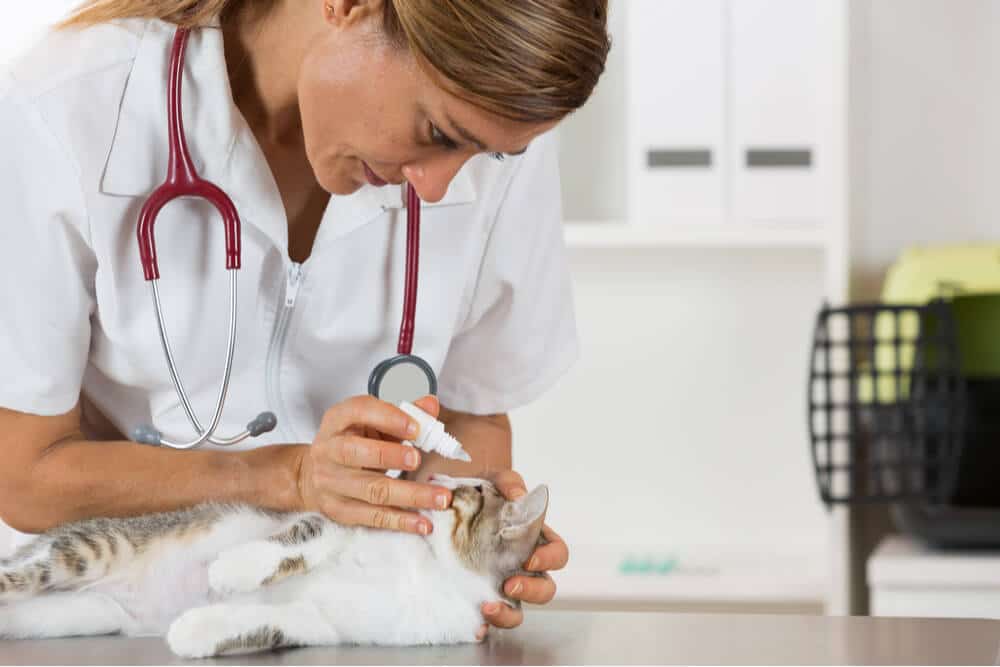 Entropion in cats is a painful condition that can quickly lead to damage to the eye surface as the eyelid edge rolls in causing fur to rub against it.

Most often seen in either young kittens with eye infections and chronic squinting or elderly cats with sunken eyes due to weight loss and muscle loss, entropion requires eye medications to prevent bacterial infection and corneal ulcers. Entropion is usually best treated with entropion surgery.

How do you treat entropion in cats?

Entropion in cats is most often treated with surgery to realign the eyelid edge properly. Antibiotic eye medications may be used to treat or prevent bacterial infections on the eye surface caused by the entropion.

How much does entropion surgery cost for cats?

Can entropion correct itself?

Mild entropion caused by squinting might correct itself once the cause of the squinting is treated (such as conjunctivitis), however this isn’t common.

Why is my cat's third eyelid not retracting?

An elevated or raised third eyelid in a cat is usually a sign of eye pain from conditions like conjunctivitis, corneal ulcers, and entropion. When your cat experiences eye pain, they use a special muscle to pull their eye deeper into the socket, allowing the third eyelid to raise up over the eye surface to protect it.

One thought on “Entropion In Cats: Causes, Symptoms & Treatment​”