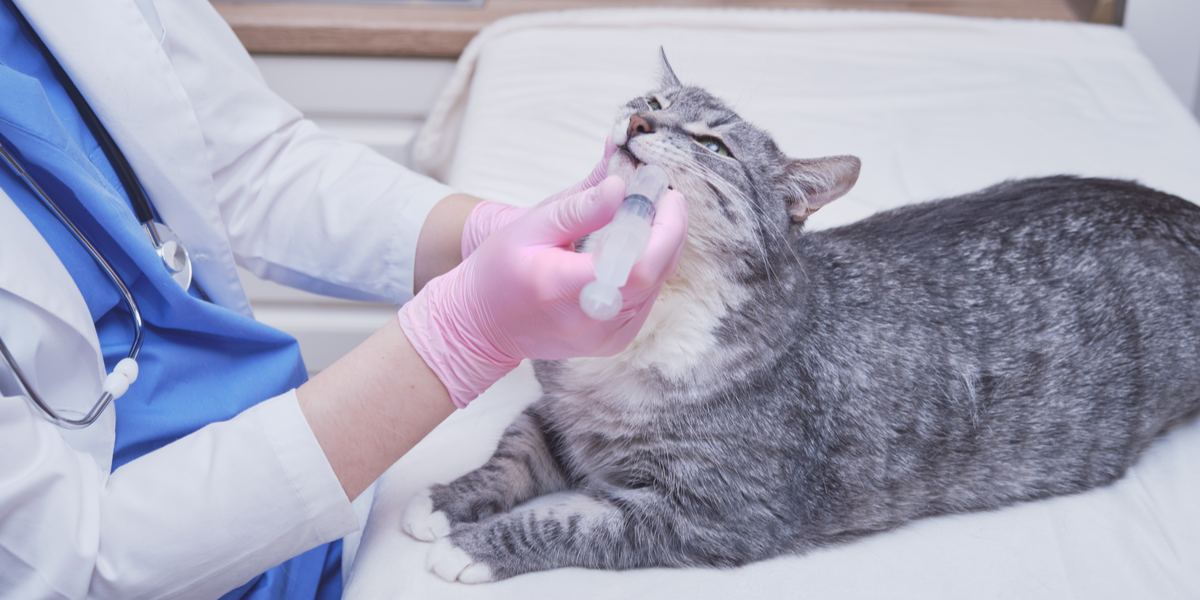 Itraconazole is an oral antifungal medication used in cats primarily to treat the fungal infection known as ringworm. In this article, you’ll learn what itraconazole is, how it works, the types of fungal infections it targets, side effects to look out for, and some frequently asked questions.

About Itraconazole For Cats

Itraconazole is classified as a fungistatic triazole compound. It works by inhibiting an enzyme that produces part of the fungal cell wall, thereby severely weakening susceptible fungi.

Itraconazole has activity against several types of fungi, including yeasts and dermatophytes, the latter being the causative agents of ringworm of which Microsporum canis is the primary concern in cats. Additional fungi it has efficacy against include Candida spp, Aspergillus, spp, Cryptococcus spp, Histoplasma spp, and Blastomyces spp.

The veterinary product Itrafungol is an oral solution of itraconazole that is labeled for use in cats. Sporonox is a human brand that may also sometimes be used.

What Does Itraconazole Do For Cats?

Contrary to its misleading name, ringworm is caused by a fungus. Its common appearance may be as single or multiple areas of hair loss and crusting on a cat’s skin. It can be found especially on the areas of the head, face, and ears, as inquisitive cats may pick the fungus up when checking out dark moist locations where it tends to exist naturally. The fungal spores can thrive on surfaces for 12 to 18 months.

Ringworm can also be transmitted through direct contact with another cat or other animal that is currently infected. In cats, especially longhaired cats, a carrier state may also exist where a cat can harbor and infect other animals and people through contact, even though no skin lesions or hair loss may be visible.

In some cases where single lesions are found, it may be common to use a topical cream or lotion containing an antifungal agent.

If multiple lesions are present or if there is concern that a cat may be a carrier, more comprehensive therapy is employed, with itraconazole being one of those therapy options. Other therapy measures may include continued use of topical treatments, bathing with an antifungal shampoo or a product called lime sulfur dip.

Treatment of ringworm in cats, including clearing a carrier state, is typically successful, but often requires treatment for several weeks to a couple months with recheck testing of fungal cultures or polymerase chain reaction (PCR) testing.

While an off-label use, itraconazole may also be used for skin infections involving Malassezia yeast fungi that cause skin dermatitis and infections.

There are some less common types of fungal infections in cats that itraconazole may also be used for in an off-label manner, including aspergillosis, cryptococcosis, coccidioidomycosis, sporotrichosis, blastomycosis, and histoplasmosis.

Also Read: How To Bathe A Cat? (A Step By Step Guide)

Side Effects Of Itraconazole For Cats 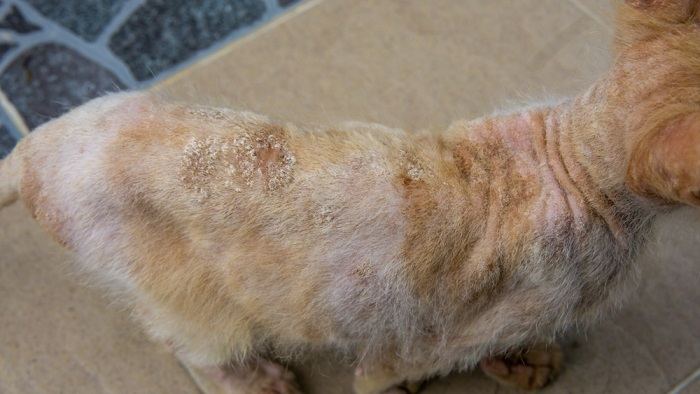 Itraconazole is primarily used to treat ringworm in cats.

In cats, the most common adverse effects of itraconazole use include predominantly gastrointestinal effects like decreased appetite, vomiting, diarrhea, increased drooling, and weight loss.

Itraconazole’s side effects in cats appear to be dose-dependent. At higher doses, GI side effects may be more likely and severe, and signs of liver toxicity have been reported more often. In some studies, increased ALT, a liver lab work value, was found in 13% of cats, while in others, no cats had elevations at appropriate doses. Cats on higher doses were found to have liver concerns about 30% of the time.

It is common to check liver values while using itraconazole, especially if any signs of digestive upset have occurred. Because effects are considered dose dependent, the medication may be discontinued until liver values have returned to normal, then restarted at a lower or less- frequent dose.

The FDA-approved, labeled dosage for itraconazole (Itrafungol) for cats to treat Microsporum canis is 5 milligrams/kilogram by mouth given once daily for seven days on alternating weeks for three treatment cycles.

How Long For Itraconazole to Work in Cats?

Cats are essentially treated on weeks one, three, and five, and left untreated weeks two and four.

Both of the FDA-approved brands, Itrafungol (approved for cats) and Sporanox (approved for people), appear to have high bioavailability in cats. The human capsules are not absorbed as well in cats and their dosage size will far exceed the needed dose for most cats, making liquid forms more practical and effective.

Also Read: How To Give Your Cat A Pill (With 7 Proven Tips!)

In general, if ringworm is found on one cat in a household of multiple cats, all cats should receive administration of itraconazole treatment together at the same time, as an asymptomatic carrier state in one of the cats is always possible. Treating one cat and not all may result in a ringworm infection not resolving as expected or being reacquired.

Doses for other types of fungal infections can depend greatly on what organism is present and should be up to a veterinarian’s discretion.

Because ringworm can resemble lots of other skin conditions that are not caused by Microsporum canis, it is very important to always have a diagnosis based on testing by a veterinarian before starting itraconazole.

Fungal infections can take a long time to treat, often requiring several weeks of medication. It is very important to always continue treatment as directed, even if visible hair loss or other lesions on your cat’s skin and fur appear to have resolved. Continuing treatment at least one month beyond a negative ringworm culture or PCR is the general standard. 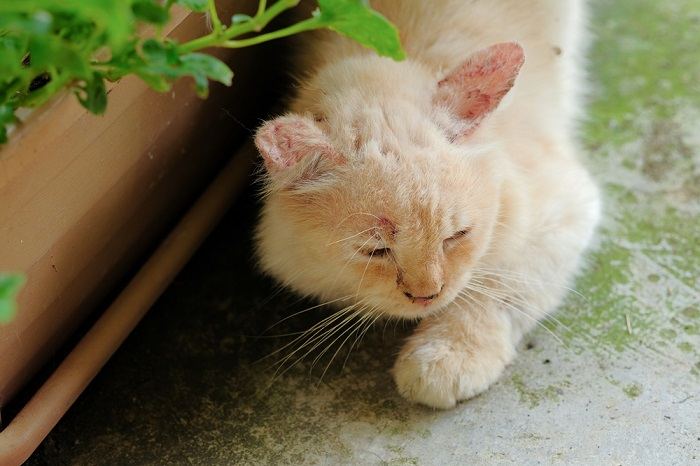 Compounded itraconazole should not be used to treat cats with ringworm as it has been found to be less effective than  the FDA-approved brands.

Compounding medications is very common in veterinary medicine, as it allows us to provide medical therapy for our animal patients by different dosage routes, or make dosing easier based on the form of a medication or its flavor.

However, in the case of itraconazole specifically, it has been recommended to not use a compounded form, as studies have shown that these forms are far less bioavailable and less effective than FDA-approved brands.

Itrafungol, the brand FDA approved for cats, also comes with a dosing syringe that allows for most accurate dosing in cats, which is important given a higher risk of side effects with inappropriate doses.

Also Read: Why Is My Cat Not Eating?

Itraconazole is a common antifungal medication used in cats, predominantly to treat cats with a ringworm fungal infection that have multiple lesions or a carrier state. Although GI and liver effects can occur, they appear to be very dose-dependent in cats. The FDA-approved brand Itrafungol is recommended for the best efficacy and safety.

What does itraconazole treat in cats?

How long does itraconazole take to work in cats?

The FDA-approved brands are highly bioavailable in cats but because the drug has a long half-life, may not reach appropriate concentrations for up to one week.

For ringworm, most people will see noticeable improvement or even resolution of hair loss, crusting, or other signs after the first month of treatment. However, it is always important to base further treatment on repeat testing to ensure treatment is not discontinued too early, which could lead to recurrence.

Is itraconazole safe for cats?

The brand Itrafungol, which is FDA-approved for cats, appears to be well-tolerated at the appropriate doses. This brand includes a dosing syringe for accurate dosing. Side effects and toxicity of intraconazole appears in cats to be very dose dependent, highlighting the importance of proper dosing under a veterinarian.

If side effects are seen, it may be possible to discontinue the drug temporarily and restart it at a lower dose or frequency.

How do you give a cat itraconazole?

The most effective dosage form for cats is one of the FDA-approved liquid solutions. Capsule forms are much less bioavailable in cats, and compounded forms of the medication have also proved to be less effective from decreased absorption.

The liquid solution approved for cats can be given with or without food, meaning that it could be given directly by mouth using the included syringe, or potentially directly on food if a cat will eat it shortly after.

It has been noted that the FDA-approved human brand Sporanox is better given without food, meaning this solution form is best given directly by mouth at least one hour before or after a meal, for best absorption.