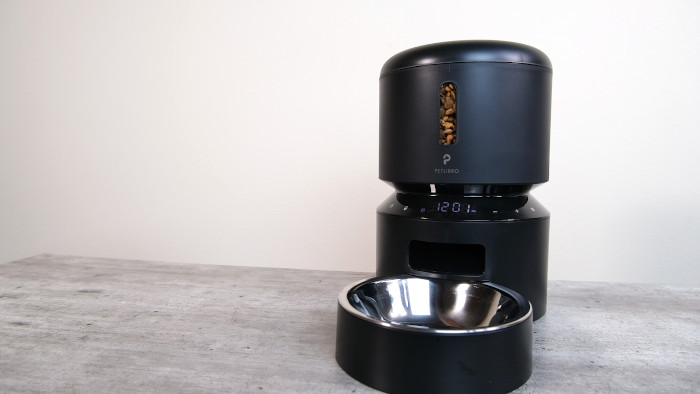 With a sealing twist-lock lid, anti-theft dispensing rotor, and a desiccant pack to adsorb moisture, the Petlibro Granary has a full suite of features to keep your cat’s dry food fresh, crisp, and secure. These features are built into a chunky little silo-shaped design that makes the Granary unlike any other automatic feeder I’ve tried.

Read on to find out what my cats and I thought of the Granary and whether or not it could be a good choice for your cat.

If you decide to try the Petlibro Granary for yourself, don’t forget to use our exclusive coupon code. When you enter the coupon code ALLABOUTCATS at checkout in the Petlibro store, you’ll receive 20% off of a single product in your first order.

Why Should You Trust Us?

Cats.com has reviewed hundreds of cat products, including a range of pet tech and accessories like water fountains, toys, and feeders.

As one of the head product reviewers at Cats.com, I’ve personally tried dozens of these products with my two cats, Wessie and Forest. I’ve researched, pulled apart, cleaned, and tested feeders ranging from classics like the PetSafe Healthy Pet Simply Feed to high-tech units with microchip detection and built-in webcams.

Based on this background, I know what to look for in a good automatic feeder, which flaws are dealbreakers, and which feeders are the best fit for different types of homes.

With all of that in mind, let’s jump into my review of the Petlibro Granary automatic pet feeder.

First, Let’s Get Some Background On The Petlibro Granary 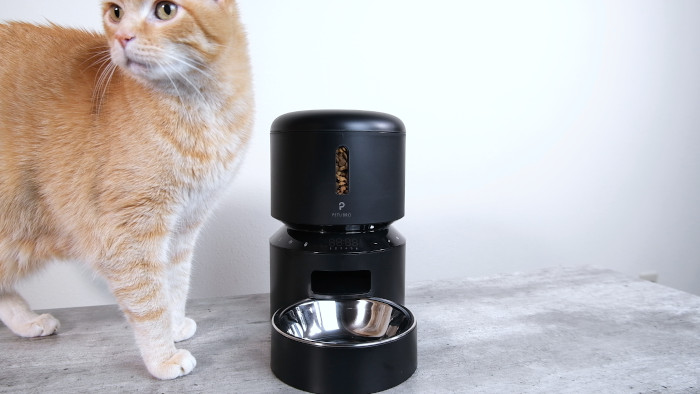 Petlibro’s Granary feeder is the newest addition to the brand’s lineup of automatic feeders and fountains.

The Granary is the newest addition to the Petlibro lineup of automatic feeders and fountains.

Before using the Granary, I’d tried a few other Petlibro products, including their basic 4L feeder with a non-locking lid and the Easy Feed with its 6L capacity and locking lid. While the Easy Feed made some definite improvements over the older model, it still wasn’t completely secure or airtight.

Launched in the summer of 2021, the Granary makes significant improvements upon those older models, particularly in their weakest areas.

With a secure twist-lock lid, patented rotor design developed to keep cats from fishing kibble out through the spout, desiccant pack built into the lid, and a stainless steel bowl, the feeder is equipped with powerful freshness features from bottom to top. It’s well-sealed against moisture, air, and probing paws, making it an ideal option for cats who seem able to hack into anything.

Aside from these features, the Petlibro Granary is a straightforward upright feeder without a lot of bells and whistles. It has six programmable meal time slots with meal size options ranging between about 1 ⅓ tablespoon and 4 cups. An easy-to-read LCD screen tells you the time and current battery level and allows you to control all of your settings at a press.

Overall, it’s a simple upright feeder that nails the basics while acting as a food fortress—it’s a streamlined but secure unit ideal for food thieves.

Over the course of the last couple of weeks, I’ve spent some hands-on time with the Petlibro Granary. I unpacked it, assembled everything, and used it with my cats. I took notes on how easy it was to program, how well it dispensed food, and how my cats reacted to it.

Let’s start with unboxing and setup. 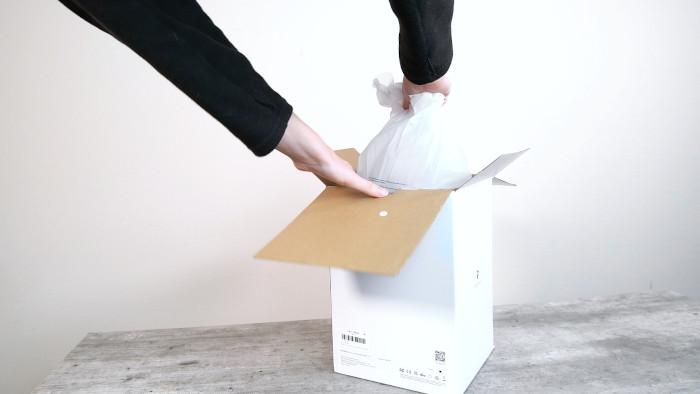 The Petlibro Granary comes neatly packed in a small box. The instructions and supplies are nested inside of the food hopper, so I started by pulling those out. Minimal assembly is required—you’ll just slip off the bubble wrap and snap a few pieces together.

After sliding the bowl into the base, attaching the hopper, I powered the unit up by plugging it in. The Granary comes with a USB cable and 5 V DC adapter, but you can add backup power by slipping in 3 D batteries (not included).

The Granary feeder is a cylindrical unit measuring 11 x 7.5 x 7.5 inches or 28 x 19 x 19 cm. It’s squat but sleek and easily fits into the home without being obtrusive.

The hopper has a 3 L capacity, which adds up to about 12 ⅔ cups of dry food, though that will vary depending on how dense your cat’s food is.

If you’ve researched or used other automatic feeders, you’ll know that this isn’t a huge food capacity. For example, the ever-popular PetSafe Healthy Pet Simply Feed has a 24-cup capacity. The Easy Feed 6L feeder from Petlibro contains 25.4 cups.

However, having a small capacity isn’t necessarily a bad thing for an automatic feeder.

A single hopper should last a single cat for at least two weeks, and that lower capacity translates to a reduced risk of the food going stale. For such a freshness-focused unit, this capacity makes sense. 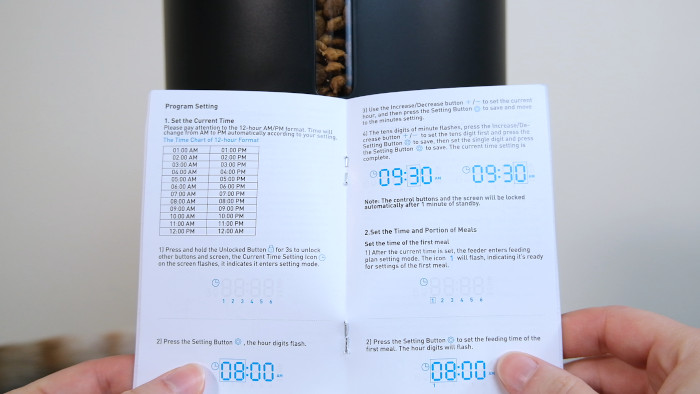 The Granary comes with a complete instruction booklet and a quick-start guide.

After I’d filled the hopper with kibble and plugged the unit in, it was time to program. Programming the feeder happens on the LCD screen, which has several menus allowing you to set the time of day, choose how many meals your cat gets each day, and select portion sizes for each of those meals.

The Granary uses a portion-based system rather than using standard weight or volume measurements. Each “portion” is the amount of food that fits in one compartment of the rotating dispensing mechanism in the base of the unit and measures 20 ml or about 1 ⅓ tablespoons. 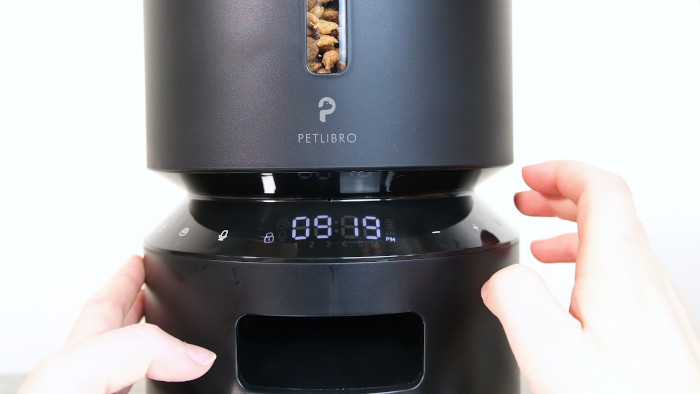 The buttons on the Petlibro Granary’s LCD screen allow you to program it. From left to right: unlock, dispense a portion, set up your voice call, lock status, clock, and battery readout, menu navigation, and select.

With 1-50 portions per meal, you’re able to give your cat between 1 ⅓ tablespoon and over 4 cups per meal. In other words, the Granary gives you plenty of flexibility when setting up each meal’s size.

Finally, you can also program a feeding call so that your cat will hear the sound of your voice each time you serve a meal. Playback is fully customizable, so you can choose to play it between 0 and 5 times per meal.

While interesting, this isn’t the Granary’s most functional feature. I found that the recording was muffled and accompanied by a tapping sound, and I don’t think my cats are any more likely to come to a muffled recording than the sound of food dropping into a bowl.

How Did The Petlibro Granary Perform?

During my test, I found that the Petlibro Granary feeder worked consistently, cleanly dispensing my selected portion sizes at my chosen times. It makes a slight buzzy sound when dispensing with none of the loud clattering or snapping sounds you’d hear from some other feeders.

Like other Petlibro feeders, it has a jam prevention feature, so it detects when food is starting to back up against the spout and will stop dispensing until that food is cleared out of the way. 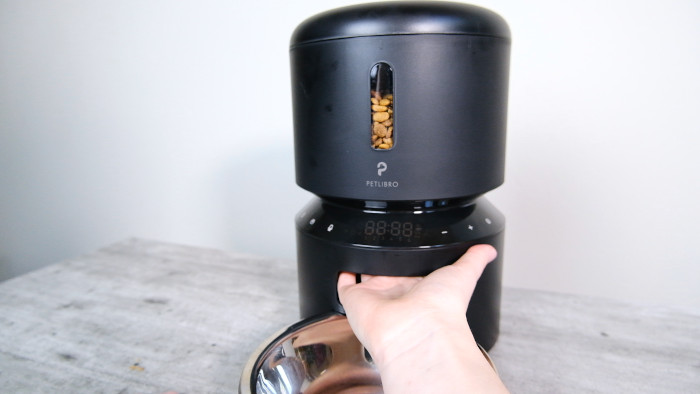 The Granary aced all of my security tests.

I’m excited to say that the Granary was one of the most secure upright feeders I’ve tried. I did several security tests, and the Granary passed all of them.

Neither lid-pawing nor chute-probing nor knocking the feeder over could release the contents of the Granary. The feeder secures food at multiple levels—a snug twist-seal lid locks it in at the top of the hopper and a patented dispensing hopper blocks off the chute.

No matter how motivated your cat (or household dog!) is, they shouldn’t be able to break into this feeder.

My cats seemed to like the Granary feeder. Unlike some other feeders, it runs quietly, so they weren’t scared of it. The bowl is just wide enough and not too deep, which made it easy for the cats to eat from it. 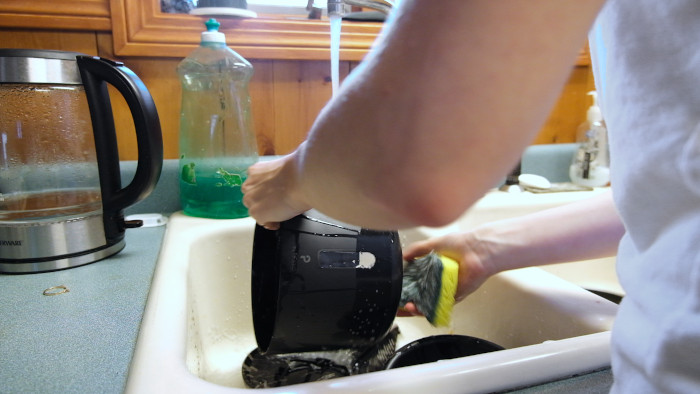 It’s easy to wash the Granary in the dishwasher or by hand.

The Granary is easy to clean and maintain. Its stainless steel bowl resists bacteria accumulation and is dishwasher-safe, and the hopper and lid are removable for hand washing. You can wipe out the base with a damp cloth or paper towel. All of the parts come apart and snap back together easily.

The Petlibro Granary currently costs $69.99 in the Petlibro store and on Amazon. According to the Petlibro website, that’s a $10 discount from the normal $79.99 price.

Compared to other automatic feeders with a similar selection of features, that’s a reasonable price. The PetSafe Simply Feed, for example, costs just under $100 and, while it’s definitely larger and more flexible, it doesn’t have the security features or cat-friendly design of the Granary.

If you enter the coupon code ALLABOUTCATS at checkout, you’ll get 20% off of your first order of a single item in the store, whether it’s this feeder or anything else that they have for sale.

From performance to price, I was impressed with the Granary feeder. It’s not the biggest or most feature-rich feeder, but it does a great job of the basics and excels in security.

If you have a food-motivated cat who tends to break into their feeder, the Granary is a promising option. If you’re concerned about moisture seeping into the feeder, mold growth, or bugs getting in, the feeder’s secure tank has some very promising features for you as well.

Overall, this is a fortress of a feeder and, in my opinion, the best one Petlibro has made yet.

Where To Buy The Petlibro Granary Automatic Pet Feeder?

Petlibro’s feeder is sold both through the Petlibro store and Amazon.

If you shop in the Petlibro store, you’re able to take advantage of our discount code and save $13.99, bringing your cost down to $56. Enter ALLABOUTCATS at checkout to secure your 20% discount on your first purchase of the Petlibro Granary automatic pet feeder or any other single item in the store.

Your Petlibro purchase ships for free to addresses in the contiguous United States and is backed by their 30-day money-back guarantee. 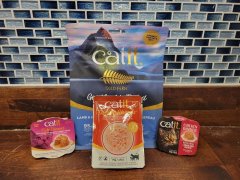 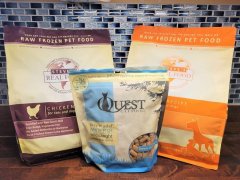 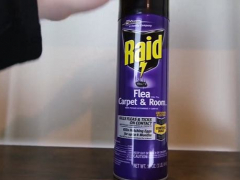 All About Cats
Benadryl For Cats: Dosage, Safety & Side Effects
JOIN THE FAMILY