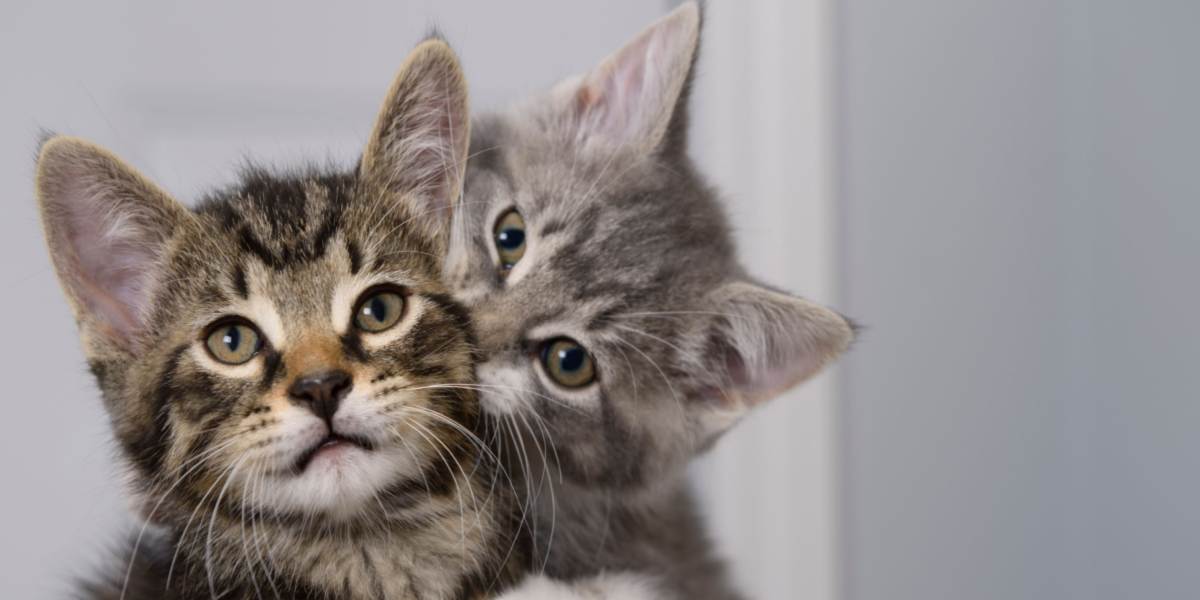 When our cats snooze, snuggled up on our laps, it’s hard to imagine that they are descended from wildcat ancestors. And yet, watch your pets a little closer, and you’ll see just how many wild traits they have adapted to express in their more domestic surroundings!

Neck biting is a common behavior that can manifest for several reasons. It can be alarming to watch, but this adapted behavior can have positive manifestations, too. After all, not all neck biting results in injury, and it can be an essential part of feline communication, so it shouldn’t be eliminated entirely.

Here are the top 5 reasons that your cat might show signs of neck biting: 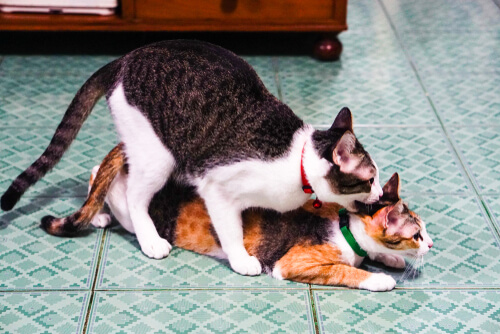 When cats mate, male cats often appear dominant over female cats. The tom cat mounts the female and bites the female cat’s neck to hold her still. Generally, this will not harm the female but protects the male when he is most vulnerable. Neck biting can have a calming effect on the female (just has mothers lift or hold their kittens) and prevents her from turning and attacking him.

In fact, carrying young is another instance where neck biting is not intended to cause harm. Cats are adept at carefully lifting their tiny kittens by the scruff of their neck, perhaps to move them out of harm’s way or to a new den or bed.

It seems this is the safest and most effective way for the queen to carry her young. Remember, fur will protect a kitten’s fragile skin from gentle biting. And holding them by the scruff of the neck is believed to have a calming effect on the young kitten. 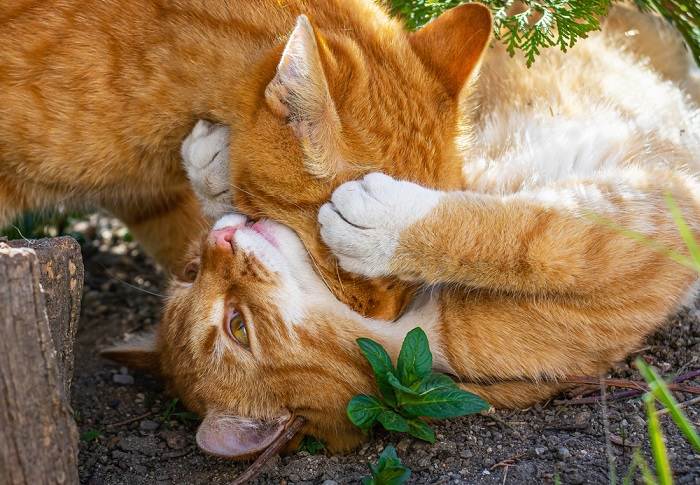 Neck biting might look alarming, but more often than not it’s harmless.

Kittens love to play fight with the family, other cats, and toys. Playing is a fantastic opportunity for young cats to mimic and trial different behavior while allowing them to test boundaries and communicate with their peers and human family.

Cats can also hone their fighting and hunting skills, and have a lot of fun in the process. Pouncing, tumbling, and biting at another cat’s neck or human hands is exciting. Plus, the recipient provides instantaneous feedback on what is OK and what is not. Learning has never been so fun for your kitty!

It follows, therefore, that a lack of socialization at a young age might increase unwanted behaviors. But what about when you play calmly with your adult cat or sit grooming them, and they turn and bite? This is just their way of telling you they have had enough. Read more about why your cat might bite you when you are petting him.

Also Read: 8 Purrfect Games You Can Play With Your Cat 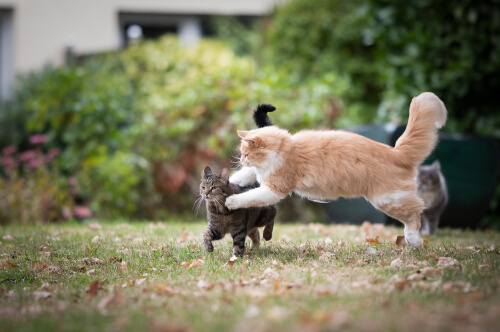 in multi-cat households, displays of dominance and neck biting can be a way for your cats to maintain their hierarchy

Your cat has learned all he needs to know about fighting through play, but now he has reached sexual maturity, his view of the world is slightly different. After all, as his adult hormones kick in, he is becoming more adventurous and starting to mark his territory. Still, all his neighbors might not be as welcoming as he had hoped, and some aggressive cats may be on the block.

Suppose your cat’s territory overlaps with that of another cat. One cat will likely take issue with this. It is also common for cats to express dominance over resources. This includes space, food, litter boxes, toys, and human contact.

Neck biting is an effective way for the biting cat to express his dominance over another cat vying for the same resource. This is common when cats are scrapping outside the home. But also in multi-cat households, displays of dominance and neck biting can be a way for your cats to determine and maintain their hierarchy.

A new cat may take time to settle into an established hierarchy, and this integration should be managed carefully. Here are some tips on how to introduce your new family member successfully. 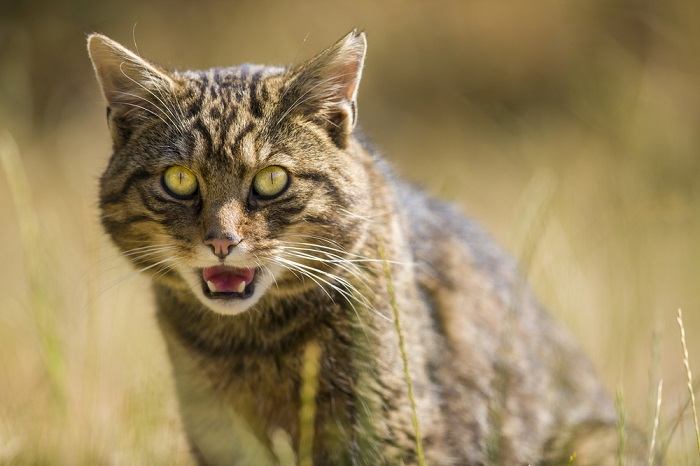 Cats are natural predators, and their hunting instincts cannot be denied.

You may witness your cat demonstrating a whole array of hunting skills, from silently stalking to pouncing and attacking their prey.

The intense drive to do this can be overwhelming for them. As with their wild ancestors, cats are programmed to immobilize their prey as quickly as possible. And biting the neck of their target is highly effective. Your cat may not be out prowling every evening. Instead, you may see their predatory instinct driving play behaviors with their littermates or toys just the same.

5. Increased Aggression Due To A Medical Issue 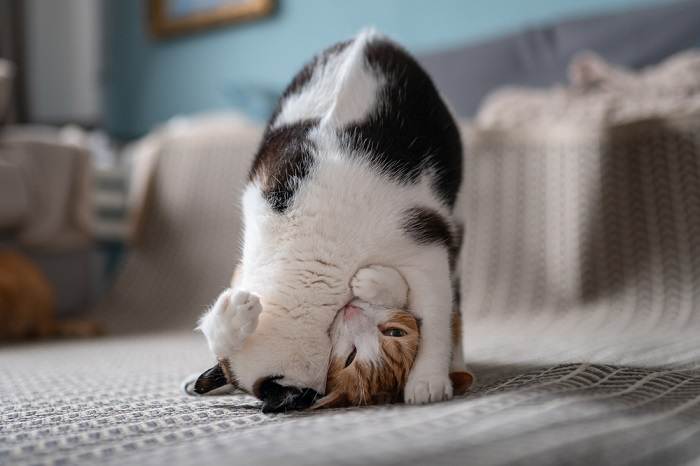 Occasionally, neck biting of housemates and aggressive behavior might signal a behavioral or medical issue.

If your cat has always been a bit of a softie, but suddenly he is showing more aggressive behavior, he might be trying to tell you something. If biting other cats’ necks is completely out of character for your cat, try to determine whether your cat is under any undue stress.

This might be down to changes around the house, within the family, or in the neighborhood. If no extraneous cause can be identified, consider whether your cat might be feeling unwell or in pain. Behavioral changes and increased aggression in cats can result from many medical conditions.

For example, some medical conditions cause chronic pain (e.g., arthritis) or behavioral changes as a result of hormonal imbalances (e.g., hyperthyroidism) or neurological disease (conditions affecting the brain). Often these illnesses come with other symptoms, too, so monitor your cat carefully for any other out-of-character behaviors. If you think your cat’s behavior change might be due to illness, a trip to see your veterinarian is essential. 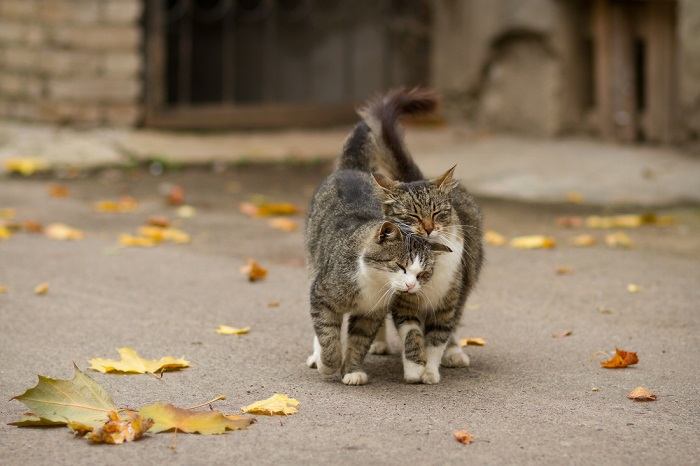 Neck biting is not a behavior that needs to be eliminated entirely. It is essential, however, to get to know your cat’s body language and intervene before things get out of control. Giving cats in multi-cat families plenty of space is also important. And, of course, if the worst of the fighting is happening with neighborhood cats at night, you may have to implement a curfew to keep your kitty safe.

Also Read: Do Cats Get Annoyed? 10 Subtle Signs To Watch Out For

Is it OK for my cat to bite another cat's neck?

Neck biting is a natural instinct for cats and is absolutely fine in the right context. Gentle biting to communicate their needs is to be expected. Biting as part of play behavior or as a way to show they are feeling overstimulated is an essential part of your cat's communication kit.

Playtime is a wonderful opportunity for your cat to express themselves. Aggressive biting is less desirable, however, and can cause injury to other cats. In these circumstances, it is crucial to determine any triggers and address these first.

How can I tell if my cats are playing or fighting?

Body language and vocalization (calling out) are vital to determine whether your cat is in play or fight mode. Play is likely to be silent or involve quiet meows and hisses in kittens, and is relatively gentle despite chasing and tumbling.

The cats should not be showing any signs of distress. When this progresses to fighting, cats might show aggressive posturing beforehand with raised hackles, ears back, hissing, and growling.

Cats tend to be very vocal when fighting, and their body language is more aggressive, intending harm to one another. Remember, it can be dangerous to intervene and stop a cat fight. You must be extremely careful that you don't get bitten yourself!

How can I stop my cats from fighting?

It is essential to consider all the reasons your cats might fight. Do they have enough safe spaces away from each other? Is there conflict over food or toys? Is there a disruption in the home due to building work? Or is your older cat becoming arthritic and less patient with your kitten?

Ensuring each cat has plenty of space to hide from one another and to eat and sleep in peace is a good start. If your cats show signs of overstimulation or frustration, try to intervene before any biting begins by offering toys and treats or moving the aggressor away to a quieter space.

Never reward biting behavior as this might reinforce that biting is OK. Remember, punishments should be avoided as they are ineffective also. It is far better to stop the undesired behavior before it even happens!